Belarus dictator Lukashenko admits he and Putin are ‘the most harmful, toxic people on this planet’

Belarus dictator Lukashenko makes startling admission he and Putin are ‘the most harmful, toxic people on this planet’ and ‘co-aggressors’ in front of uncomfortable-looking Vladimir

Belarus leader Alexander Lukashenko has admitted he and Vladimir Putin are the ‘most toxic people on this planet’.

The pair held a summit yesterday amid speculation that the Kremlin leader will force the Minsk tyrant to join his war in Ukraine.

Until now Lukashenko has resisted being part of the war.

But in a video clip that could be useful later to war crimes investigators, Lukashenko painted himself and Putin as evil pantomime villains. 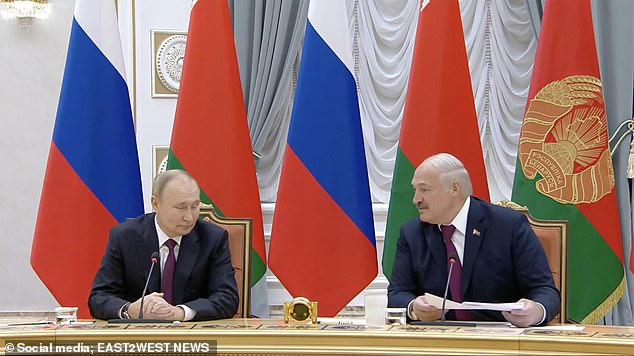 ‘You know, the two of us are co-aggressors,’ he confessed.

‘The most harmful [and] toxic people on this planet. We have only one dispute – who is more [toxic]?

‘Vladimir Vladimirovich [Putin] says that I am. I am already starting to think that he is.’

Lukashenko told journalists: ‘Well, [we] decided that we both are [equally toxic]. That’s all. 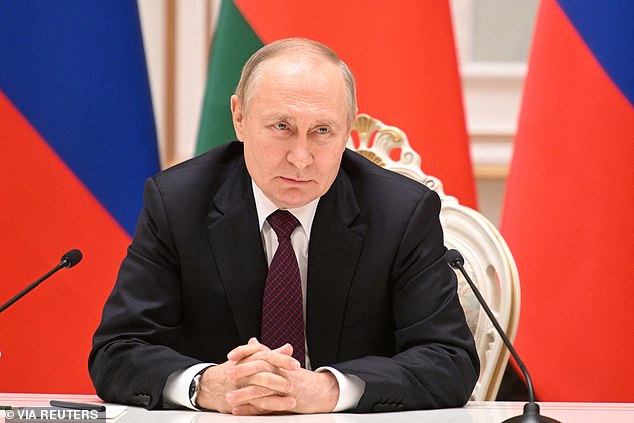 Putin smiled and fidgeted with his papers but appeared to agree with the remarks by Lukashenko, a former collective farm boss

‘And if someone today thinks of tearing us [apart], of forcing us apart….[they will not].’

Putin smiled and fidgeted with his papers but appeared to agree with the remarks by Lukashenko, a former collective farm boss.

Both leaders use their secret services to torture and humiliate political foes, according to human rights groups and opposition politicians.

Their political enemies are mostly locked up or have been forced into exile.

Putin met  Lukashenko during a rare visit to Belarus, fuelling fears in Kyiv that he intends to pressure his ex-Soviet ally to join a fresh ground offensive that would open up a new front against Ukraine.

Putin’s visit for talks with the Belarusian President was his first to Minsk since 2019 and the Russian President.

The Kremlin has for years sought to deepen integration with Belarus, which relies on Moscow for cheap oil and loans, but Lukashenko has so far resisted outright unification with Russia, despite being a key ally in the war.

However, speculation mounted ahead of Putin’s visit that he would pressure Lukashenko to send his troops to Ukraine alongside Russia’s military after a series of defeats for Moscow in nearly ten months of fighting.

Putin’s troops have been driven back in Ukraine’s north, north-east and south. Belarus is believed to have Soviet-era weapon stockpiles that could be useful for Moscow, while Lukashenko needs help with his country’s ailing economy.

Kremlin spokesman Dmitry Peskov told Russian news agencies that although Belarus was Russia’s ‘No1 ally’, suggestions that Moscow wants to pressure Minsk into joining what it calls its ‘special military operation’ were ‘stupid and unfounded fabrications’.

Serhiy Nayev, Ukraine’s Joint Forces Commander, said he believed the talks would address ‘further aggression against Ukraine and the broader involvement of the Belarusian armed forces in the operation against Ukraine, in particular, in our opinion, also on the ground’.

Ukraine’s top general, Valery Zaluzhny, told the Economist last week that Russia was preparing 200,000 fresh troops for a major offensive that could come from the east, south or even from Belarus as early as January, but more likely in spring.

Russian forces used Belarus as a launch pad for their abortive attack on the Ukrainian capital Kyiv in February, and there has been Russian and Belarusian military activity there for months. Three Russian warplanes and an airborne early warning and control aircraft were deployed to Belarus last week.