Britain has ‘NO plans’ to demand Covid tests from Chinese tourists

Britain could impose restrictions on travel from China amid mounting concern about surging Covid cases, it was revealed today.

Defence Secretary Ben Wallace said the situation was ‘under review’, hours after the government suggested there were no plans to follow the example of other countries such as the US and bring in compulsory testing for arrivals.

On a visit to see border controls in Manchester, Mr Wallace said decisions will be taken soon based on ‘medical advice’.

However, health minister Will Quince caused further confusion this evening by hinting that extra checks are unlikely unless there is evidence of a threat from variants.

There have been warnings that the huge number of cases sweeping China after it finally eased lockdown rules could spawn new mutant strains of the virus.

But Professor Paul Hunter, an epidemiologist at the University of East Anglia, said border controls generally only worked for diseases that weren’t already spreading in the UK.

‘Controls imposed on one other country never work because if an infection is going to spread internationally it will spread to multiple countries and bypass unilateral controls,’ he said. 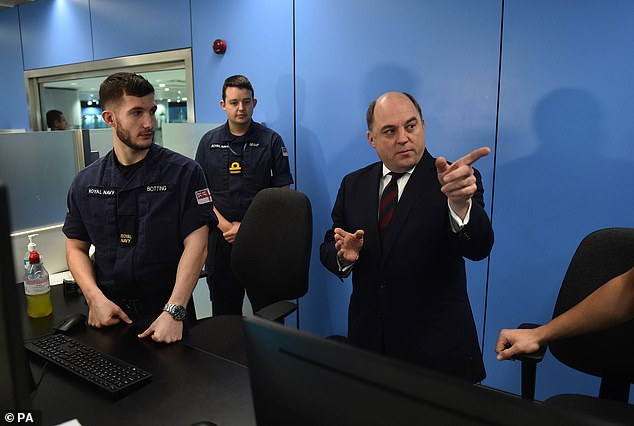 Dr Simon Clarke, a microbiologist based at the University of Reading, also doubted whether requiring a Covid test would be worth it.

‘I think travel restrictions are only likely to slow down transmission, not stop it completely,’ he said.

‘The tests aren’t 100 per cent accurate, plus people can come via other countries.’

Asked whether the Government would consider restrictions for travellers from China, Mr Wallace said: ‘The Government is looking at that, it’s under review, we noticed obviously what the United States has done and India and I think Italy has looked at it.

‘We keep under review all the time, obviously, health threats to the United Kingdom, wherever they may be.

‘I think the Department of Transport will take medical advice, talk to the Department of Health and they’ll come to some decisions depending on what we see coming out of China, but at the moment it’s under review.’

Sent out to try to clarify the situation this afternoon, Mr Quince said the ‘key threat’ will be whether there is any new Covid variant from China and ‘there’s no evidence at this point’ of one.

He told broadcasters: ‘A lot of people will be concerned about the news coming out of China.

‘The Secretary of State for Health and Social Care (Steve Barclay) met with the chief executive of the UK Health Security Agency and the chief medical officer this morning, so it’s being taken incredibly seriously by the Government.

‘The key threat is any new variant. There’s no evidence at this point of a new variant from China, a variant that is not already prevalent here in the UK.

‘But, nevertheless, we’re keeping the situation very much under review.’

Tories are split on the idea of restrictions on travellers from China, with some backing the idea as a sensible precaution.

This strategy would allow results to be trusted and for genomic testing to be carried out to understand whether any new variants are emerging, he said.

‘I think there are two different reasons to bring in testing – one is the American approach which is pre-testing to slow the spread.

‘That is a difficult thing to do because containing a virus like Covid is like trying to stop the sea.

‘But what the Italians are doing is post-flight surveillance of arrivals in Italy in order to understand whether there are any emerging variants and… the impact of the virus on the Italian health system.’

‘That is a sensible thing to do and something the British Government should be seriously looking at.’

But former minister Desmond Swayne told MailOnline that calls to impose testing on arrivals from China made no sense. ‘Why? What would be the point? It’s endemic here.’

France has also said it has no plans to require travellers coming from China to be tested.

Professor Brigitte Autran, head of the country’s health risk assessment committee COVARS, told France’s Radio Classique: ‘From a scientific point of view, there is no reason to bring back controls at the border… but that could change any day. ‘

Professor Robert Dingwall, a sociologist at Nottingham Trent University who advised the Government on the pandemic when it began, said: ‘It has long been accepted that there is no evidence that border restrictions do any more than delay the spread of a pandemic virus by a very short period.’

A sample of tests from two recent flights to Europe found that 50 per cent of people on board had the virus.

However, health minister Lord Bethell urged the Government to follow Italy in introducing Covid tests for visitors from China.

This strategy would allow results to be trusted and for genomic testing to be carried out to understand whether any new variants are emerging, he said.

‘I think there are two different reasons to bring in testing – one is the American approach which is pre-testing to slow the spread.

‘That is a difficult thing to do because containing a virus like Covid is like trying to stop the sea.

‘But what the Italians are doing is post-flight surveillance of arrivals in Italy in order to understand whether there are any emerging variants and… the impact of the virus on the Italian health system.’

‘That is a sensible thing to do and something the British Government should be seriously looking at.’

He added: ‘You’ve got to appreciate that a lot of people who get on these flights, we know from experience, will be people who are poorly themselves and are coming to the West for medical help.

‘That is quite a daunting prospect for our healthcare system and it’s important that we know which of them have got the virus and what kind of virus they’ve got.’

Lord Bethell’s comments come after the US joined Italy, India, Taiwan, South Korea, Malaysia and Japan in announcing new measures after the abrupt end of Beijing’s zero-Covid policy sparked a surge in cases. 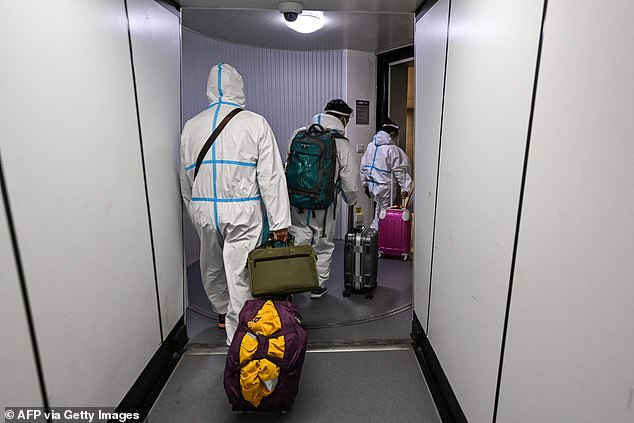 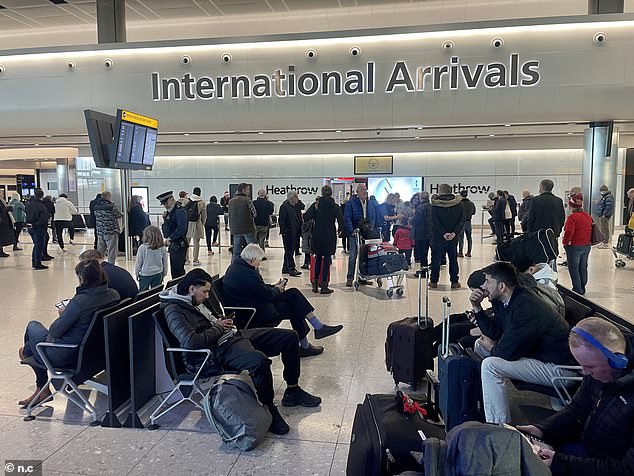 A busy Heathrow this week but visitors from China will not need a negative Covid test result when they come to the UK, the Government said today 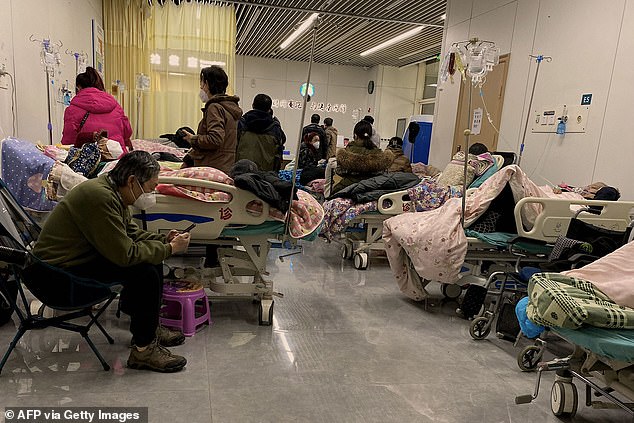 But a UK Government spokesman said today: ‘There are no plans to reintroduce Covid-19 testing or additional requirements for arrivals into the UK.’

The spokesman added the UK Health Security Agency (UKHSA) will continue to closely monitor the prevalence and spread of harmful variants and keep available international data under review.

However, travel expert Paul Charles suggested it would ‘inevitable’ the UK would also start requiring tests for Chinese travellers.

‘Ministers don’t want to make the same mistakes they made the first time round when Covid began,’ he told Sky News.

‘They don’t have enough information or quality data coming out of China to be able to make clear decisions yet, so I think they’ll want to insist that airlines test people beforehand and have proof of negative Covid tests before they let people into the UK.’

In the US, starting on January 5, all travellers from China will be required to take a Covid-19 test no more than two days before travel and provide a negative result before getting on their flight.

This applies to anyone aged two years and older.

In a statement explaining the restrictions, the US Centres for Disease Control and Prevention (CDC) cited the surge in infections and what it said was a lack of adequate and transparent information from China, including genomic sequencing on the viral strains circulating in the country.

The CDC said: ‘These data are critical to monitor the case surge effectively and decrease the chance for entry of a novel variant of concern.’

Italy is so far the only country in Europe and EU member state to have set the new testing rules.

According to the BBC, the European Commission said its health security committee will convene today to discuss ‘possible measures for a co-ordinated EU approach’ to China’s Covid situation.

Beijing has finally abandoned its doomed Covid-zero strategy, long after the rest of the world started living with the virus.

This has led to a large exit wave of new infections among the nation’s population of 1.4 billion – and the United States is now also considering its next course of action. 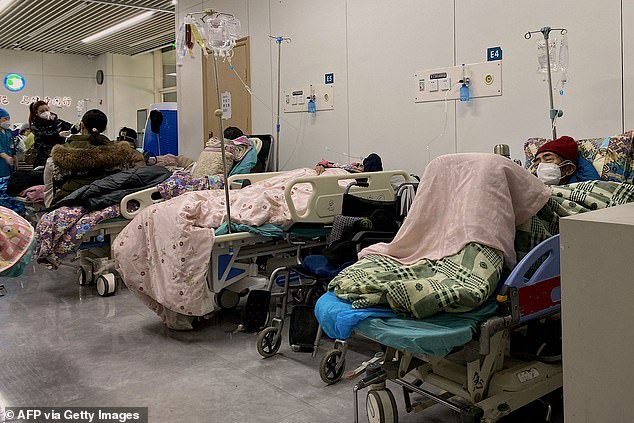 China will scrap quarantine for inbound travellers from January 8, drawing an end to some of the world’s harshest border restrictions.

The move was greeted with jubilation by Chinese citizens, who rushed to book international flights, triggering a surge in ticket prices.

But Bloomberg reported up to 50 per cent of passengers on two flights into Milan from China tested positive for Covid, prompting the Italian government to bring mandatory testing back.

Of 62 passengers on the first flight subjected to testing, 35 came back positive, while 62 out of 120 tested positive from the second plane. 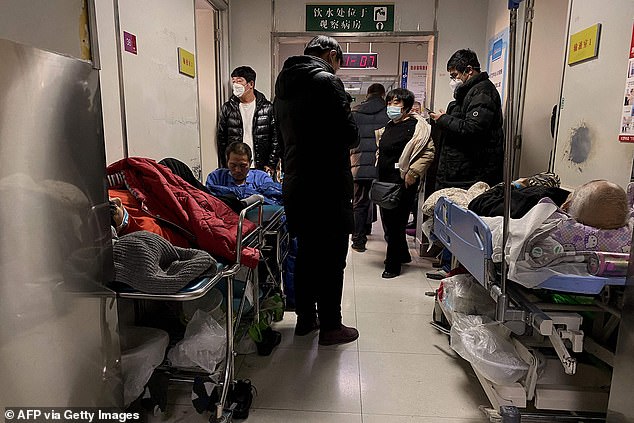 The measure was ‘essential to ensure the surveillance and identification of any variants of the virus in order to protect the Italian population’, he said.

The northern region of Lombardy introduced screening from Tuesday, a day before the measure was brought in nationwide.

Lombardy, which was also the first region to impose a lockdown when coronavirus hit Europe in early 2020, is testing arrivals from China at Milan’s Malpensa airport at least until January 30, the foreign ministry said.

Swabs collected at the airport in recent days are already being analysed by the national health ministry to help identify any new variants.

US officials said late Tuesday they were considering a similar policy, after Japan and India also introduced PCR testing on arrival for Chinese passengers. 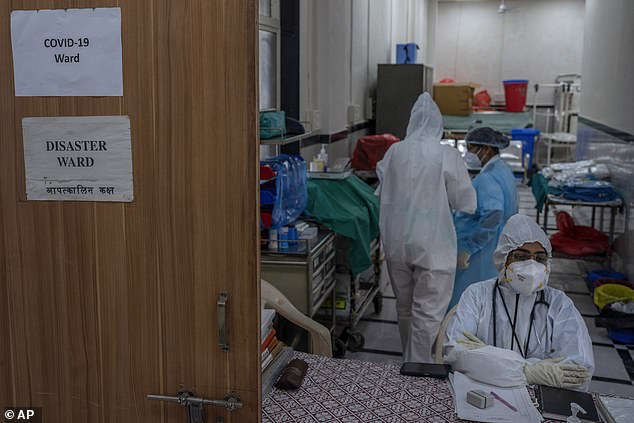 China scrapped quarantine for inbound travellers from January 8, dismantling the last remaining piece of its stringent zero-Covid policy and ending some of the world’s harshest border restrictions 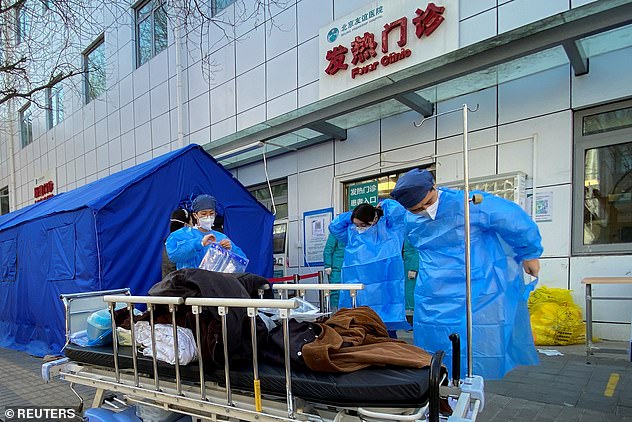 ‘There are mounting concerns in the international community on the ongoing Covid-19 surges in China and the lack of transparent data, including viral genomic sequence data, being reported from the PRC,’ US officials had said.

Taiwan, a self-ruled island that China claims as its own, said it would also screen travellers from the mainland for the virus.

All passengers arriving in China have had to undergo mandatory centralised quarantine since March 2020.

The period of isolation fell from three weeks to one week in June, and to five days last month.

The end of that rule in January will also see Covid downgraded to a Class B infectious disease. 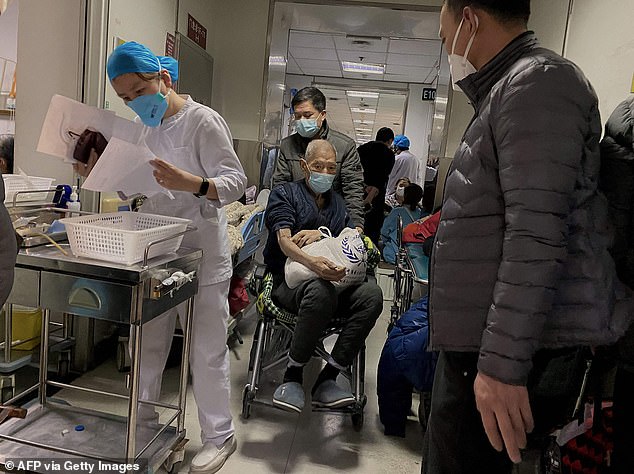 A patient is transported through the hospital in a wheelchair yesterday 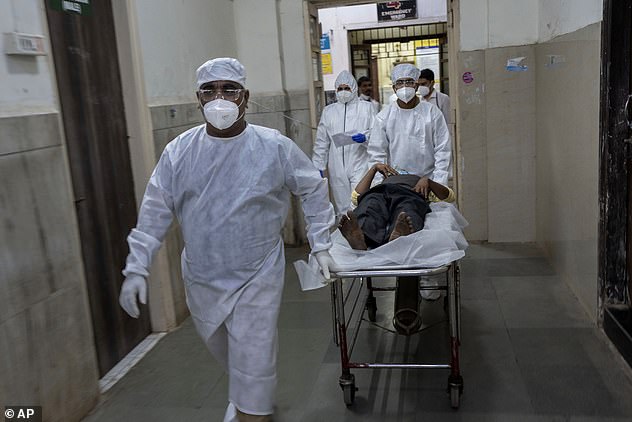 Medical staff are ‘pretty much all’ expected to continue working despite testing positive for the virus, one doctor said

Chinese immigration authorities said they would resume issuing passports for tourism purposes from January 8, after years of strict exit controls.

The country’s loosening of measures brought the curtain down on a regime of mass testing, lockdowns and long quarantines which has stalled its economy and triggered large-scale nationwide protests.

But hospitals and crematoriums across China continue to be overwhelmed by an influx of mostly elderly people who are ill with the virus.

Dozens of mostly elderly Covid patients have been seen lying on gurneys in overflowing hospital emergency wards in Tianjin, 140 kilometres (87 miles) south-west of the capital Beijing. 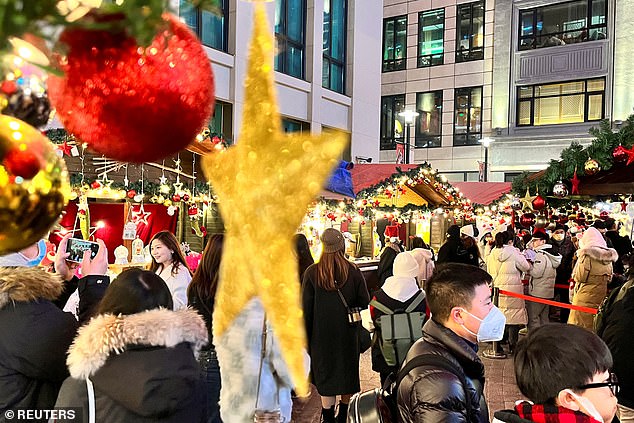 Pictured: People in Shanghai attending a Christmas market amid a surge in Covid cases

Medical staff are ‘pretty much all’ expected to continue working despite testing positive for the virus, one doctor said.

Other countries have expressed concerns about the potential for new variants to emerge as China battles the world’s biggest surge in infections.

The winter surge comes ahead of major public holidays next month in which hundreds of millions of people are expected to travel to their hometowns to reunite with relatives.

Chinese authorities have said the scale of the outbreak is now ‘impossible’ to track and narrowed the criteria for defining Covid deaths.