British fans in Qatar for the World Cup could spend almost £1,000 in a week on mobile phone roaming charges

Thousands of Britons arriving in the Gulf state for the tournament could be handed a hefty bill of £969 if they use their phone abroad, as Qatar has among the highest roaming fees in the world.

Only Vodafone includes data, calls and texts in its standard international bundle, meaning those with other UK network providers could risk eyewatering mobile bills during their stay, according to new research by USwitch.com.

And whilst most providers impose the £45 worldwide cap on data roaming – introduced by the UK government to help travellers avoid huge bills – there is no cap on texts or calls for most networks. This could mean that many Brits could be caught out by high charges.

The worst hit will be customers of network provider iD Mobile as they face data costs of £9.60 per MB. The network also has the highest rates for making overseas calls and texts from Qatar, with phone calls to the UK charged at £6 per minute and each text costing £1.20.

This means that a British football fan using 1GB of data, making 20 minutes of calls and sending ten texts a day could end up with an eye-watering £969 bill for a week’s trip.

Thousands of Britons arriving in the Gulf state for the tournament could be handed a hefty bill of £969 if they use their phone abroad, as Qatar has among the highest roaming fees in the world 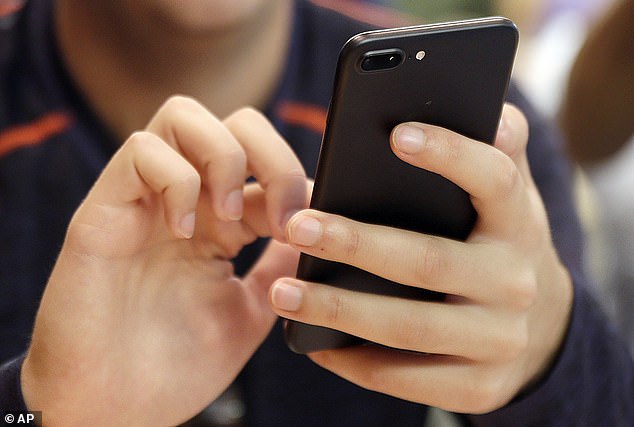 Only Vodafone includes data, calls and texts in its standard international bundle, meaning those with other UK network providers could risk eyewatering mobile bills during their stay, according to new research by USwitch.com (file image)

Football fans heading to Qatar for the World Cup face paying up to £80 per pint as part of extortionate ‘drinks deals’ on offer in the typically teetotal Muslim kingdom.

Champion’s Bar at the Marriott Hotel in Doha, which advertises itself as the city’s ‘best sports bar’, is selling tickets to watch the final for £240 including food and three drinks, meaning each beer or glass of wine costs up to £80.

Meanwhile other hotels in Qatar – one of the few places you are allowed to drink due to strict Sharia laws – are halting or ratcheting up the price of their usual promotions, with supporters facing prices of £11 per pint or more.

Even those hoping to watch games inside World Cup fan zones – where drinking will only be allowed between certain times – face paying upwards of £7 for a beer.

End to end, the Qatari peninsula is about 113 miles long – about the same as the distance from London to Bristol – and has a regular population of just 300,000 excluding expats and migrant workers.

That has led to fears that facilities on the peninsula will simply be overwhelmed by the number of sports fans set to arrive, which will likely exceed 1million.

It is those fears which have led some hotels in Qatar – The Four Seasons, Kempinski, and W Hotel – to ramp up the prices of their regular drinks deals.

Four Seasons is putting a stop to its £42 two-hour all-you-can-drink promotion and will ramp up the cost of its bottomless brunches from £130 to £306, The Sun says.

The Kempinski has stopped happy hours when it usually charges £8.40 for a beer, with fans expected to cough up £11 instead.

And W Hotel will serve the last of its £108 bottomless brunches on Friday, ahead of the first game of the tournament next weekend.

One Four Seasons worker said: ‘We wouldn’t cope if thousands of fans tried to take advantage of our happy hours so we’ve had to stop them.’

Meanwhile, Virgin Mobile customers will face data roaming charges of £5. They will also be charged £5 per minute for a whole call to the UK and each text will cost £0.60.

Over a week, Virgin Media customers could be charged £788 for using 1GB of data, making 20 minutes of calls and sending ten texts from Qatar.

Of the four largest UK providers, O2 is the most expensive with data roaming costing £7.20 per MB. Meanwhile Three customers will be charged £6 per MB.

EE customers can only roam on the network in Qatar by buying a daily Travel Data Pass, which gives 150MB of mobile data for £6.85.

Vodafone is by far the cheapest UK network provider for Brits travelling to Qatar. The provider allows customers to use their domestic monthly allowance of calls, texts and data for £6 a day.

This means that over a week, Vodafone customers could spend just £42 on using their phone abroad.

The Hayya card, a form of identification for overseas fans during the World Cup, will allow Brits to get a free pre-paid SIM which will be valid for three days.

Catherine Hiley, mobiles expert at Uswitch.com, said: ‘The thousands of Brits heading to Qatar could find themselves facing an unwanted penalty if they aren’t careful to avoid the huge fees for mobile use in the Gulf state.

‘Before you go to the tournament, make sure you know what your network will charge while you’re out there for calls, data and texts.’

She added: ‘With the majority of providers not including Middle Eastern countries in their standard roaming packages, the charges for mobile data can be severe.

‘So it’s worth turning roaming off on your smartphone for the duration of your stay.’

Hiley continued: ‘Download any World Cup apps or maps before you leave the UK, as well as any films, shows and music you might want while there, so you don’t have to rely on finding a secure Wi-Fi connection in Qatar.

‘If you want to contact people back home, it’s better to use a messenger app when you’re online, rather than paying expensive call costs.

‘And, if you’re attending the World Cup with friends, consider setting up a group on a service like WhatsApp.

‘This will give you an easy way of keeping in touch without resorting to texts.’