British man, 69, is arrested over ‘murder’ of his 52-year-old wife in Spain

British man, 69, is arrested over ‘murder’ of his 52-year-old wife found ‘with a head wound’ outside their Spanish home

Spanish police have arrested a 69-year-old British man on suspicion of murdering his 52-year-old wife.

The arrest occurred at the couple’s home in Camposol near the Costa Calida resort town of Mazarron in the south-east province of Murcia.

The alarm was raised around 1am on Sunday.

Police are said to have discovered the victim, who is also being described as British, outside the property with a blow to the head and held her husband inside the house.

Spanish police have arrested a 69-year-old British man on suspicion of murdering his 52-year-old wife outside their home in Mazarron, Spain 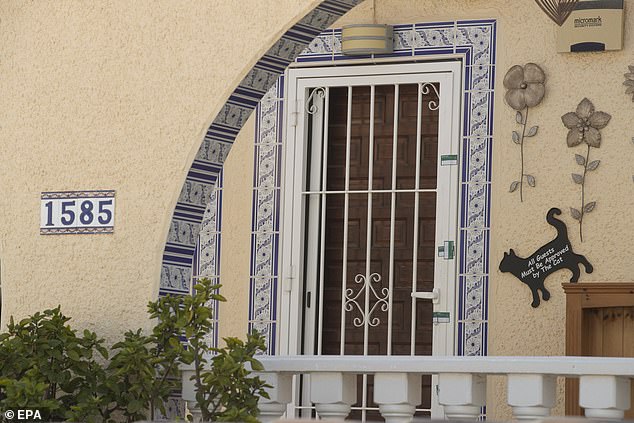 Local reports said the unnamed expat had been reported to police for domestic violence in 2007.

He was due to appear before a judge in the nearby town of Totana in a closed court hearing today and is expected to be remanded in custody pending an ongoing criminal probe.

His wife meanwhile was already dead by the time police and paramedics arrived.

A Civil Guard spokesman confirmed a British man had been arrested on suspicion of homicide.

He said: ‘We were called just after 1am on Sunday.

‘A British man aged 69 was arrested on suspicion of killing his wife after she was discovered lying dead outside their property.

‘He was handed over to a judge for further questioning earlier today.’ 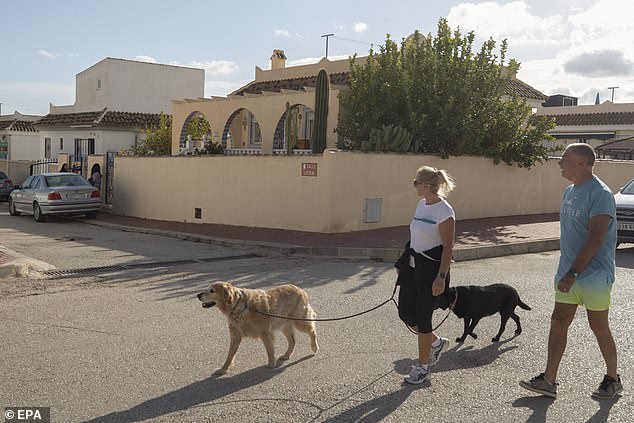 Neighbours walk near the house where a British 52-year-old woman was murdered allegedly by her partner, also a British national, who has already been detained by the Spanish Guardia Civil, in Mazarron, Spain, 05 December 2022

‘She had suffered a blow to the head and although detectives are still awaiting the results of the autopsy, everything is pointing towards her having suffered a violent death which is being treated as a homicide.’

Local reports pointed towards protective measures having been put in place after the dead woman reported her partner to police for domestic violence in the past.

It is understood those measures had been ‘inactive’ since 2015 and there had been no subsequent complaints filed by the unnamed woman, although authorities are yet to officially confirm the reports.

Pepe Velez, the central government delegate for the Murcia region confirmed the case was already being treated as a gender-related killing.

He said in a statement: ‘We regret and energetically condemn this alleged gender violence killing by an English citizen of his partner yesterday in the Camposol residential estate in Mazarron.’ 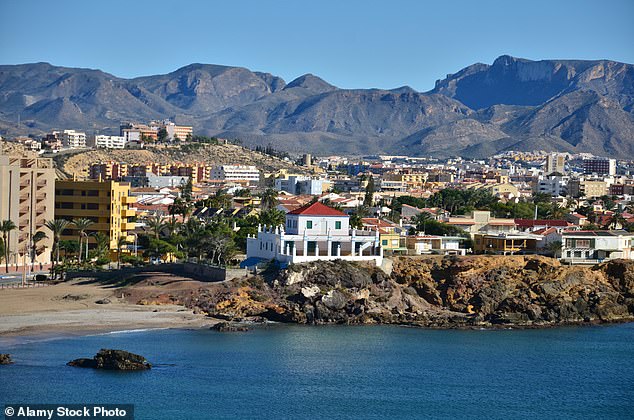 Last month an 80-year-old British man was arrested over the violent death of his wife at their flat in the Costa del Sol resort of Torremolinos.

A judge decide to send David Cadwallader, 80, to a prison psychiatric unit while he continues to investigate him over the stabbing of his wife Lesley, 69.

She was found dead by police after making a desperate 999 call while being attacked. She had multiple stab wounds including some to her neck.

Local reports said she had phoned the emergency services late on November 4 to say she had been knifed four times before the line went dead.

Her husband, said to have Alzheimer’s, was discovered lying on their bed.

It later emerged he had been arrested three times in previous months for alleged domestic violence but was released because his wife decided against pressing charges.

A well-placed judicial source, backing an official police statement at the time, said after Mr Cadwallader’s detention: ‘We can confirm the victim declined to ratify in court previous complaints she had made regarding allegations of domestic violence which had led to the husband’s arrest.

‘Because there were no witnesses and the alleged victim didn’t want to press charges, the court had to shelve the cases.