An angry camel has bitten and trampled a man to death at a children’s holiday camp in Siberia, Russia.

The watchman, 51, punched the ‘peaceful’ camel in the face, provoking the animal.

A local report said ‘the animal did not appreciate such treatment’, and the camel retaliated by biting the man several times.

The victim was taken to a nearby hospital in Omsk, but it was not possible to save him.

An angry camel has bitten and trampled a man to death at a children’s holiday camp in Siberia, Russia. A still frame from a video of the incident shows the watchman, 51, punching the ‘peaceful’ camel in the face 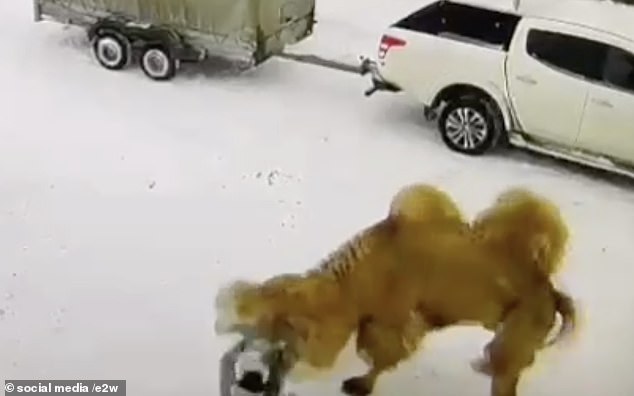 Shocking video shows the moment the 51-year-old watchman was bitten and trampled to death by a furious camel, in Omsk, Russia 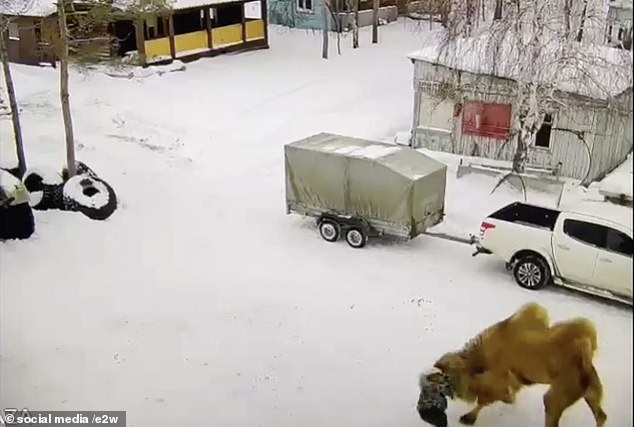 A local report said ‘the animal did not appreciate such treatment’ after the man punched it. The enraged camel retaliated by biting the man several times

Bactrian two-humped camels can grow to over seven feet tall (standing on all four legs) and weigh as much as 1,800lbs (816kg).

Prosecutors are investigating whether the camel was lawfully allowed to be held at the children’s camp.

Bactrian camels live in Central and East Asia’s rocky deserts and are adapted to deal with extremes of temperature, with a thick shaggy coat that falls away in the summer months.

Wild bactrian camels have become critically endangered, with populations declining rapidly over the last 60 years due to hunting and loss of habitat.

The former Soviet Union offered state subsidies for camel breeders in Russia during the 20th century, but uses for the animal have since dried up.

Camels have found new roles in entertainment, with camel racing reportedly becoming ‘an obsession’ in parts of Russia.

The Soviets also employed the hardy animal at the Battle of Stalingrad in World War II, transporting ammunition, fuel and wounded soldiers over long distances. 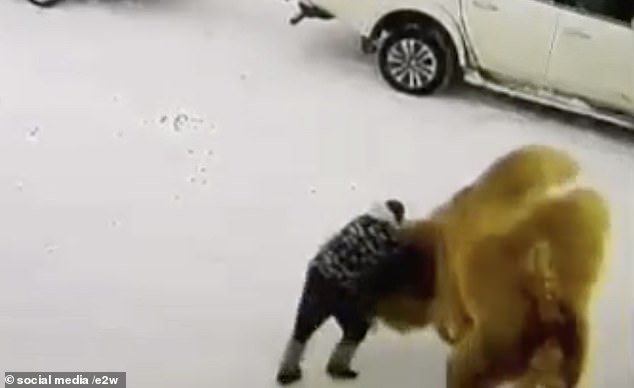 The man punched the camel after pulling strongly on its reigns, reports have said

Camels in Russia today often face either a life of misery in circus roles or abandonment.

In 2018, the MailOnline followed prosecutors as they investigated a zoo accused of animal abuse in western Russia.

A camel was pictured motionless on the tarmac in searing heat while bears and lions lay cramped in cages.

Vladimir Putin signed the ‘Law on Responsible Treatment of Animals’ in 2018, banning petting zoos from operating at shopping centres, as well as hosting animals at bars and restaurants.

The state-funded RT television network reported that this would make life harder for semi-legal circuses across Russia to use animals including camels.

The law’s scope covers the use of animals for cultural and entertainment purposes and the cruel treatment of animals, including beatings.

In July 2020, Russians were left too scared to leave their homes after a herd of 80 camels ‘invaded’ three villages and caused mayhem.

A resident said at the time: ‘If you look at one directly in the eyes […] the animal chases you and you have to run away.’

Earlier that year a rogue camel was blamed for 40-minute delays in southern Russia.

Volga Railways expressed concern that more and more wild and domestic animals had been wandering onto tracks.