Cardinal George Pell has died in Rome at the age of 81 after complications from hip replacement surgery, the Vatican has confirmed.

The Cardinal is reported to have successfully undergone the operation and was chatting with his anaesthetist when he went into sudden cardiac arrest.

Medics were unable to revive him.

His death comes just days after he attended the funeral of Pope Benedict in Rome last week.

But Pell both dealt with sex abuse allegations in the church, and against himself, over an almost two decade period, before he was convicted of historical incidents in 2018.

Cardinal George Pell has died in Rome at the age of 81 after complications from hip replacement surgery, the Vatican has confirmed 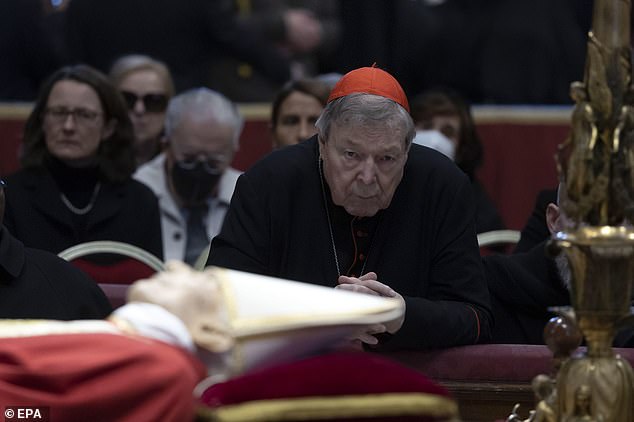 In 2018, it was claimed in court that in 1996, while still dressed in his robes after celebrating Sunday mass, he had exposed himself and masturbated in front of a 13-year-old choirboy, then raped that boy’s 13-year-old friend.

Pell called those claims a ‘product of fantasy’ and ‘absolute rubbish’ but he served 404 days in prison of a six year jail sentence before the conviction was overturned on appeal by the High Court of Australia in 2020.

ABC journalist Louise Milligan, who exposed the allegations against the cardinal, on Wednesday said his death would be ‘triggering’ for his alleged victims.

‘George Pell is dead. This will be a very triggering day for a lot of people,’ said Milligan, a reporter for the ABC’s Four Corners program. 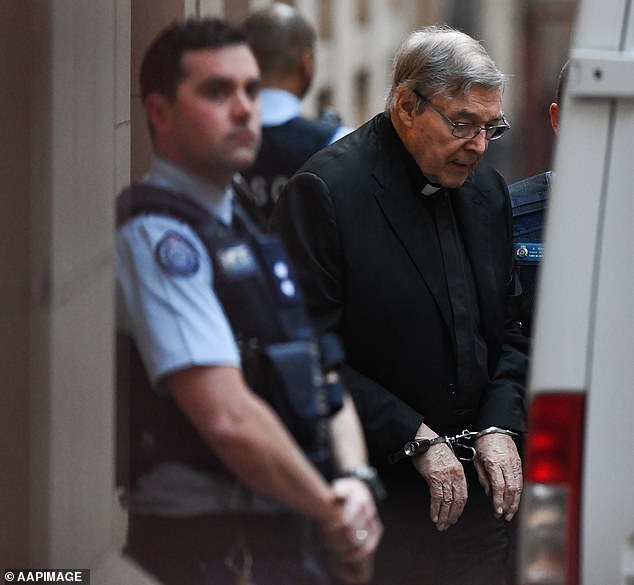 The father of one of the altar boys he allegedly molested said he will press on with a civil case against the Catholic Church, but rued his lost chance to cross-examine the cardinal.

‘The claim will continue against the church and whatever estate Pell has left behind,’ Lisa Flynn, Shine Lawyers Chief Legal Officer, said on the father’s behalf.

‘A civil trial likely would have provided the opportunity to cross examine Pell, and truly test his defence against these allegations.

‘There is still a great deal of evidence for this claim to rely on, and the court will be asked in due course to make its ruling on that evidence.’

Prior to his criminal court case Cardinal Pell was one of the highest ranked cardinals in the Vatican after he impressed church leaders with his handling of historical allegations of child sexual abuse by priests.

As Archbishop of Melbourne in 1996, he established the ‘Melbourne Response’ to handle and investigate child sex abuse complaints which was hailed as a world-first.

In 2013 he was appointed as a member of the Council of Cardinals by Pope Francis and overhauled the church’s finances as Prefect of the Secretariat for the Economy where he earned the nickname as ‘the Vatican’s Treasurer’. 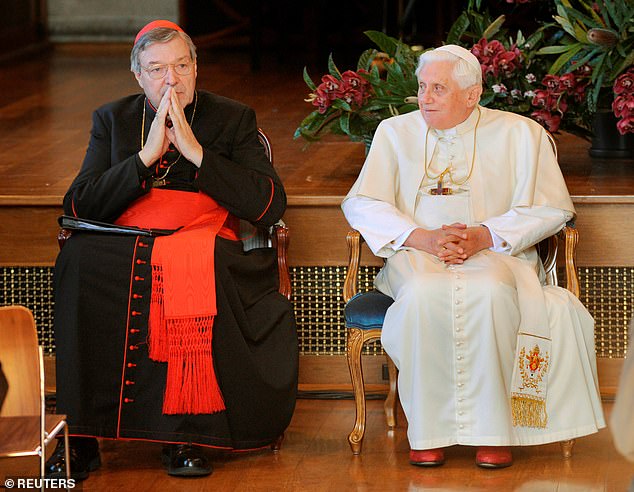 However Australia’s Royal Commission into Institutional Responses to Child Sexual Abuse found that he knew of child sexual abuse by clergy by the 1970s but did not take adequate action to address it.

Ballarat-born Pell said at the time he was ‘surprised’ by the findings and insisted the commission’s views were ‘not supported by evidence’.

He returned to the Vatican in 2020 after his convictions were overturned and prayed over the body of Pope Benedict XVI in St Peter’s Basilica last week.

In his final interview, Cardinal Pell spoke emotionally about the death of the Pope who resigned from the role in 2013 at the age of 85 because of his ill health.

‘I was very sad,’ Cardinal Pell said. ‘As a matter of fact, I was surprised how sad I was.

‘[But] I was rather pleased as I thought I had heard he was rallying and was disconcerting the experts and going to live a little bit longer.

‘I’d known him well enough, admired what he was about. I thought he was very good for the church.

‘It was sad to see another wonderful stage in church history ending.’ 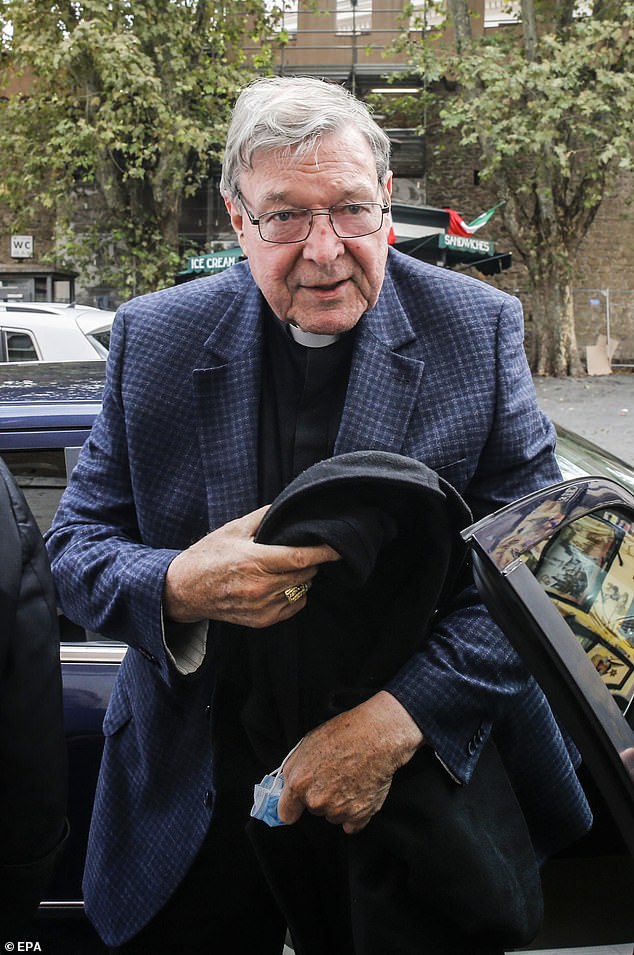 ‘It was a very unexpected death – we knew Cardinal Pell was a fairly old man, but there had been no news about him being in ill health,’ he told ABC News.

‘So this is a very sad day for many people.’

But he added: ‘George Pell was one of the most conservative figures of his generation and in the global church.

‘He was sometimes a somewhat abrasive figure and people didn’t always warm to him.

‘He was a staunch defender of traditional positions on morality, and also on questions of liturgy.

‘That won him many admirers within the church – and just as many opponents.’

WHAT WAS CARDINAL PELL ACCUSED OF?

Cardinal George Pell was accused of molesting two choir boys in the late 1990s when he was Archbishop of Melbourne.

He served 13 months in prison, before being acquitted in 2020 after the High Court quashed his convictions for child sexual assault.

‘My trial was not a referendum on the Catholic church, nor a referendum on how church authorities in Australia dealt with the crime of paedophilia in the Church,’ he said upon his release.

‘The point was whether I had committed these awful crimes, and I did not.’

In documents unsealed after his case, the child abuse royal commission found that it was ‘implausible’ that senior church figures hadn’t told Cardinal Pell child sexual abuse was happening in the Archdiocese of Ballarat.

There had been concerns these findings would prejudice a jury.

The royal commission found: ‘We are also satisfied that by 1973 Cardinal Pell was not only conscious of child sexual abuse by clergy but that he also had considered measures of avoiding situations which might provoke gossip about it.’

Cardinal Pell denied ever knowing of children being abused in the church when he worked there, including by paedophile priest Gerald Ridsdale.

He said the child sex abuse court case would have been emotionally-draining and anguished for both the cardinal and alleged sex abuse victims.

But he said Cardinal Pell came out of prison with even stronger belief in God.

‘That must have been a very difficult and emotionally draining experience for him just as it was for all the victims of clerical sexual abuse over the years,’ he said.

‘Pell wrote three volumes of journals from his time in prison which I have read and they certainly indicate a man who went through considerable anguish and suffering.

‘But he also found faith in Jesus because of that.’

Dr Pattenden said the cardinal’s legacy would be mixed among followers.

‘He has many admirers but also there are many people who hold him, at least indirectly, responsible for many of the problems which have assailed the Australian church over the past 20 or 30 years,’ he said.

‘They wish that he’d been called to account in a fuller way for some of his decisions as Archbishop.’ 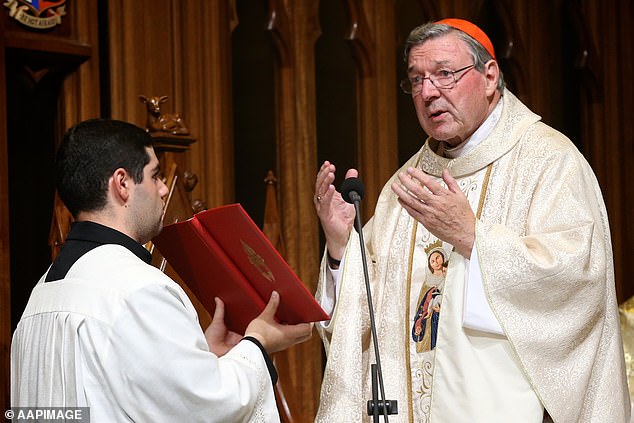 Cardinal George Pell’s legacy will be mixed among followers as he was a divisive figure, says Australian Catholic University’s Dr Miles Pattenden

The Archbishop of Melbourne Peter Comensoli paid tribute to Cardinal Pell on Wednesday after news broke of his death.

‘Cardinal Pell was a very significant and influential church leader both in Australia and internationally, deeply committed to Christian discipleship,’ he said.

‘At this immediate moment, let our prayers go out to the God of Jesus Christ whom Cardinal Pell wholeheartedly believed in and followed, that he may be welcomed into eternal life.

‘Our prayers of comfort and condolence are also with his family, especially his only surviving sibling, David Pell.’

Archbishop of Sydney Anthony Fisher added: ‘This news comes as a great shock to all of us.

‘Please pray for the repose of the soul of Cardinal Pell for comfort and consolation for his family, and for all of those who loved him and grieving him at this time.’

FROM ALLEGATIONS TO CONVICTION: A TIMELINE OF THE CARDINAL GEORGE PELL CASE

– A second indecent act was allegedly committed by Pell against one of the choirboys in a corridor at the Cathedral.

– Victoria Police Chief Commissioner Graham Ashton asks the anti-corruption watchdog to investigate the leak, but denies it came from police 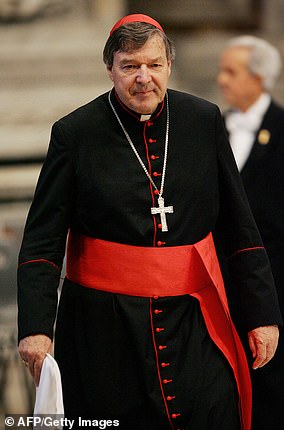 Cardinal George Pell, 77, was known as the Vatican’s treasurer and had been granted a leave of absence while facing trial over child sex offences in Australia

– Under Vatican rules, Pell gives Pope Francis his resignation on his 75th birthday, as is customary. It is not accepted

– Officers travel to Rome to interview Pell over the abuse claims. He voluntarily participates in the interview.

– Prosecutors give police the green light to charge Pell.

– He denies the charges and vows to clear his name

– Lawyers for Pell appear in the Melbourne Magistrates Court

– Pell takes leave from his Vatican finance chief role to fight the charges.

– Supporters set up a fund to help Pell fight the charges.

– Prosecutors drop one of the charges against Pell

– Mr Richter claims police conducted a ‘get Pell operation’ and accuses magistrate Belinda Wallington of bias. She refuses to disqualify herself from the case.

– Magistrate Belinda Wallington orders Pell stand trial on some charges, but throws out others

– Two trials are ordered, separating the 1970s and 1990s allegations

– A Victorian County Court employee is sacked for looking up information on the Pell case.

– Pell pleads not guilty again to one charge of sexual penetration of a child under 16 and four of indecent acts with a child, over incidents involving two 13-year-old choirboys at St Patrick’s Cathedral in 1996.

– The jury is discharged, unable to reach a verdict following a week of deliberation. Some jurors weep.

– A retrial begins. The jury aren’t told of the previous hung jury.

– Pell is found guilty on all charges by an unanimous jury

– Suppression orders prevent Australian media reporting the verdict but it spreads through international media within hours.

– Hearings begin ahead of the second trial. Prosecutors drop another charge

– An appeal is filed against the cathedral trial conviction

– Pell is due to be taken into custody on Wednesday February 27 as the plea hearing begins.

– Conviction is quashed on appeal by High Court of Australia. The court said that ‘there is a significant possibility … that an innocent person has been convicted.’

General Lord RICHARD DANNATT: We have to give Ukraine 50 tanks, not 12, to assist them win