By James Cohen For Mailonline

Chaotic scenes ensued during the anniversary clash between Guanacasteca and Liberia after the two sets of players began brawling on-field.

Footage showed players from both teams punching and kicking each other after tensions spilled over in the match and the game was temporarily suspended.

The violent scenes saw a number of players brutally attacking their opposition and, in the aftermath, the event has been labelled as a ‘stain on national football’. 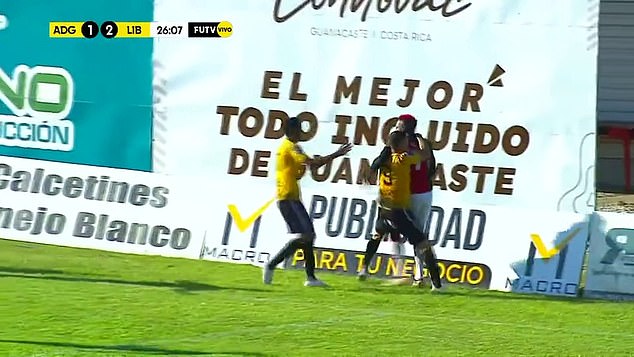 It only took 26 minutes, with the score at 2-1, for mayhem to takeover during the anniversary game.

Chaotic scenes showed players from both sides involved in the brawl, which went on for well over a minute, before security got involved.

Guanacasteca forward Steven Williams can be seen, at the start of the clip, attempting a flying-knee on one of the Liberia players in the disgusting scenes.

At the end of the video, Guanacasteca’s Williams was escorted by staff off the pitch after one of his opponents tackled him to the ground in retaliation.

Match officials suspended the game after the brawl took place and, later, announced it would resume from the start of the second half.

Guanacasteca ended up coming from behind to draw the fixture 3-3 but, afterwards, focus from players and managers was on the disgusting scenes earlier in the day. 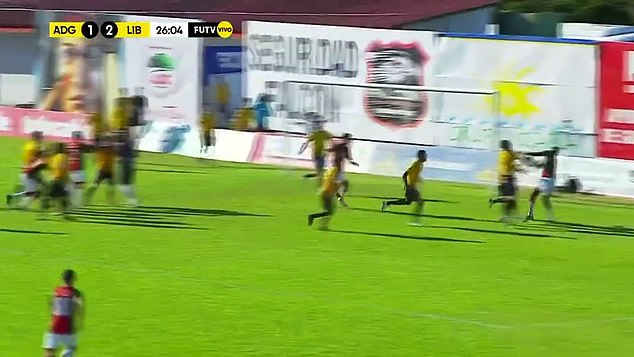 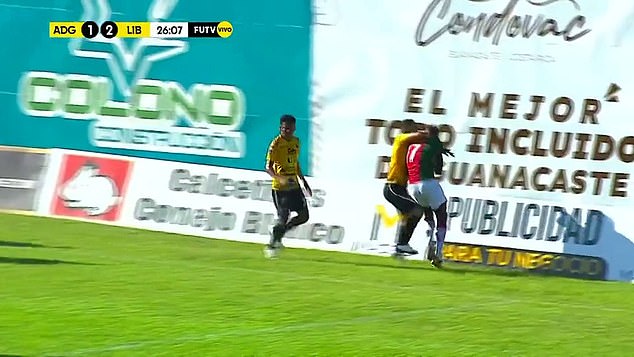 The player, eventually, grappled with his opponent before being thrown to the ground

‘When they are friendly, it is not the first time that has happened.’

Liberian midfielder Diego Madrigal then added: ‘This is a stain on national football, this cannot even happen on open courts.’

The two teams have had a fierce rivalry since Liberia won promotion to the Costa Rica top-flight in 1977 – meaning that there were two teams representing the Guanacasteca region in the league.

The match was held in anniversary for Guanacasteca team being created in 1974 – making Sunday’s match the 50th celebration.