The real-life Hangover: England fans ‘enjoy wild night at World Cup as they claim they partied with Qatari sheikh’s son in his palace and petted his monkeys, exotic birds… and even a LION cub’

By Matthew Lodge For Mailonline

The Qatar World Cup has only just begun but it is already notorious for banning beer from stadiums – which doesn’t exactly seem like a recipe for a great night out.

But that didn’t stop two England fans from partying with a ‘sheik’s son’ after their ‘hunt for beers’ ended in a palace surrounded by ‘lions, monkeys and exotic birds.’

Alex Sullivan and a friend who identified himself only as ‘John’ certainly made the best of a bad situation on Saturday night when two Qatari men they named as Nawaf and Abdul-Aziz invited them back for a ‘naughty one’ at their house.

Alex Sullivan posted video showing himself playing with a lion cub, claiming it was at the palace of a Qatari sheikh 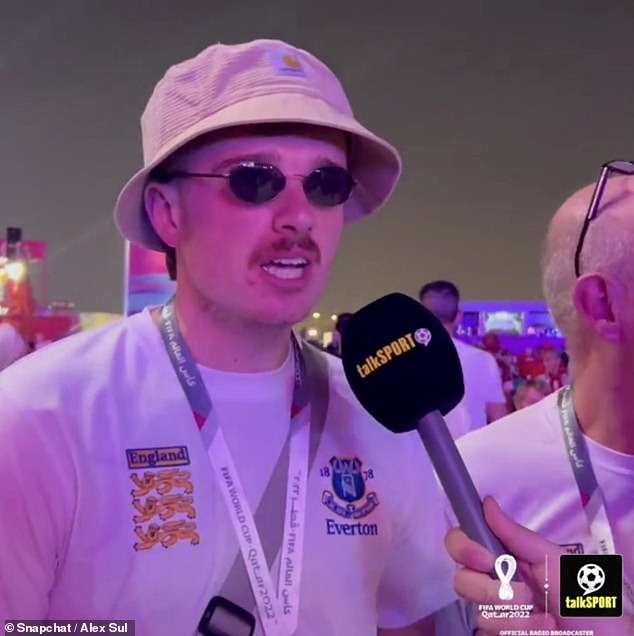 Everton fan Alex told TalkSport: ‘We were on a hunt for some beers and they said “We’ll sort beers”, so we jumped into the back of his Toyota Land Cruiser, ended up in a big palace.

‘We were in the back and he showed us monkeys, his exotic birds, it was nuts.’

John added: ‘Last night we met one of the Sheikh’s sons and he took us back to the palace and he showed us, he had lions and everything.

‘They’ve made us so welcome and look around you, it doesn’t get any better than this.’

Obviously, Twitter users were quick to doubt this tall tale – but Alex produced the receipts in the form of videos from his Snapchat account.

In them, he can be seen recounting the night as it happens – including the moment he turned up at the ‘palace’ and the moment he met a lion cub.

In one piece of footage, he can be seen walking up a driveway to what appears to be a large Qatari home.

He says: ‘We’re on a beer mission, trying to get beers back at the gaff and I’ve only managed to get us back to a f***in… a naughty one with Nawaf and Abdul-Aziz.

In another piece of footage he can be seen sitting outside under floodlights next to what appear to be a set of football nets with a group of men dressed in traditional Qatari thobes – long white robes – and headdresses.

Alex then sits down on a chair and begins petting and kissing a playful a lion cub on a leash. ‘F***in’ mad,’ he exclaims.

“We were on the hunt for beers and we ended up at a big palace, we saw his monkeys & exotic birds!” 🐒

These England fans are out in Qatar & you HAVE to listen to their story! 🤣#FIFAWorldCup  #TSWorldCup pic.twitter.com/RlclrsnEsP 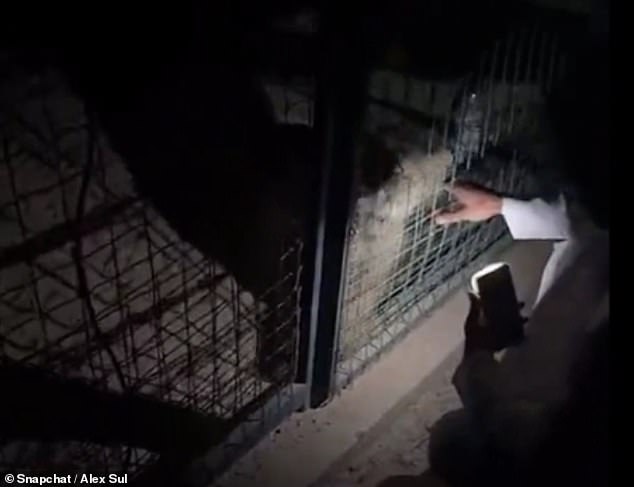 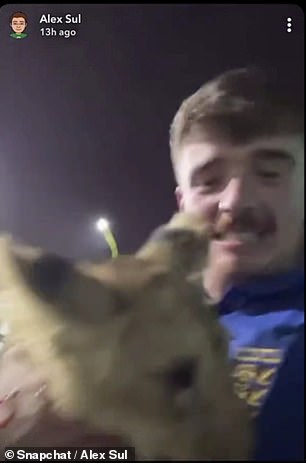 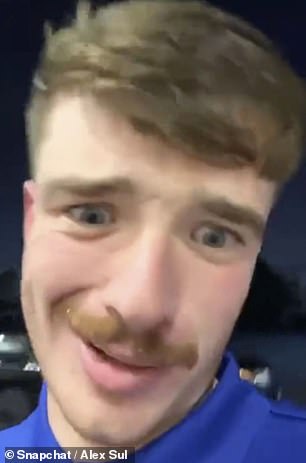 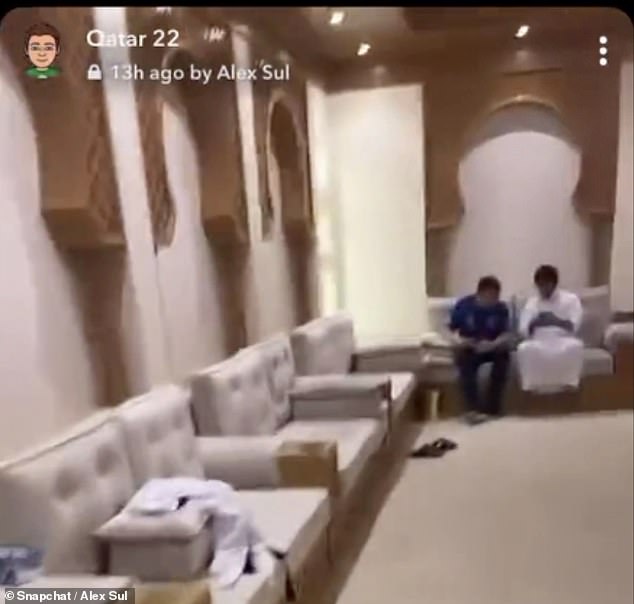 Yet more videos showed him walking around what appears to be a palatial home, hanging out with locals, and speeding down a highway in a car.

The wild night out – worthy of the Hangover movie franchise – comes ahead of England’s first game against Iran this afternoon.

The tournament has been mired in controversies in a clash of cultures between Qatar – the first Muslim nation to host – and football’s governing bodies.

There has been plenty of criticism of the nation’s human rights record, including allegations that thousands of migrant workers died building the stadiums.

Qatar’s record on LGBT and women’s rights – including comments by the country’s world cup ambassador that homosexuality is a ‘disease of the mind’ – have further damaged its image.

Fresh controversy last week arrived in the form of an announcement that Fifa would be banning beer sales on stadium concourses, further limiting the places in normally-teetotal Qatar that fans can buy alcohol.

The move, reportedly made under pressure by the Qatari royal family, means supporters are limited to buying booze in hotels, restaurants, and specially designated fan zones.

Drinks can only be purchased in the zones between certain times, and people will be limited to four drinks each to stop them getting drunk.

Anyone who does get drunk could be escorted away to sober up.

Plans by England players to take a knee and wear armbands promoting LGBT rights have also caused issues – with captain Harry Kane reportedly threatened with an immediate yellow card if he wears the armband on the pitch.