By James Franey For The Daily Mail

Eurocrats last night battled to get a grip on the EU’s Qatar corruption scandal as Germany admitted the bloc’s credibility was at stake.

Officers in Brussels investigating alleged bribery by the World Cup host said they had seized nearly £1million in cash after raids at MEPs and their associates’ homes across the Belgian capital since Friday.

Greek socialist MEP Eva Kaili is among four people to have been charged with ‘participation in a criminal organisation, money laundering and corruption’. ‘Bags of cash’ were reportedly found at her house.

The 44-year-old – previously one of the European Parliament’s vice-presidents – has been stripped of her responsibilities and expelled from her party, and Greek prosecutors have frozen all her assets.

The former TV presenter has defended Qatar in the parliament, describing it as a ‘frontrunner in labour rights’. Last night, police raided offices in the European Parliament to seize the computer data of ten parliamentary assistants as part of the probe into how the Gulf state allegedly bought influence in the EU. Qatar denies any wrongdoing.

Irish foreign minister Simon Coveney said the revelations were ‘very damaging’, while his German counterpart Annalena Baerbock said they should be resolved with ‘the full force of the law’.

‘This is about the credibility of Europe,’ she said.

Ursula von der Leyen, the European commission president, called for the creation of an independent ethics body covering all of the bloc’s institutions, saying the allegations were of ‘utmost concern’. 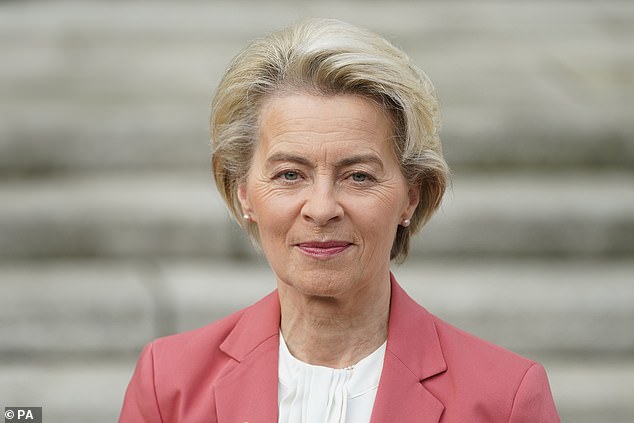 ‘These malign actors linked to autocratic third countries have allegedly weaponised NGOs, unions, individuals, assistants and members of the European Parliament in an effort to subvert our processes.’ But Hungarian prime minister Viktor Orban accused Eurocrats of hypocrisy, mocking MEPs who in September voted for a motion saying his country was ‘no longer a democracy’. Mr Orban tweeted an old photograph of former world leaders laughing with the words ‘and then they said, the European parliament is seriously concerned about corruption in Hungary’.

The Hungarian government has been locked in a row with Brussels over claims it is backsliding on the rule of law, with Eurocrats withholding funds.

It emerged yesterday that Belgian police had also raided the home of Belgian MEP Marc Tarabella in connection with the bribery allegations.

Mr Tarabella, who was not arrested, has strongly denied any wrongdoing.

Watchdogs said the probe could represent one of the biggest corruption scandals in the EU’s history.

Michiel van Hulten, director of Transparency International EU, said: ‘Over many decades, the parliament has allowed a culture of impunity to develop, with a combination of lax financial rules and controls and a complete lack of independent – or indeed any – ethics oversight. In many ways it has become a law unto itself.’

MEPs can rake in £100,000 a year tax-free, with perks such as a final salary pension, diplomatic immunity, and business class travel anywhere in the world. They can even claim £290 a day just for turning up to work.