Shock report reveals the French are….LAZY: Nation is mired in ‘laziness epidemic’ since Covid lockdown and one of the world’s most generous furlough schemes

Long has it been thought that the French are much happier on extended lunch breaks and lengthy holidays than with busy careers, but one recent study confirms such suspicions.

More French people than ever are saying they can’t be bothered to work, or even go out of the house.

The study from the French Institute of Public Opinion (Ifop) claimed that France is stuck in a ‘laziness epidemic’ after Covid-19, with 37 per cent of people saying they are less motivated to work than before.

The level of Gallic apathy has shot up in large part due to working from home, with Covid-era policies causing a labour shortage in hospitality, teaching and nursing.

France’s furlough scheme, one of the most generous in Europe, saw far more people take up furlough than in the UK — in a sign that new habits sometimes die harder than old ones.

The policies caused a ‘exhaustion and laziness epidemic when a part of the French want to slow down’, claimed the study, according to The Daily Telegraph.

A protester wearing a mask depicting Jean-Luc Melenchon participates in a rally against rising prices in France. A study from Ifop claimed that France is stuck in a ‘laziness epidemic’ after Covid-19, with 37 per cent of people saying they are less motivated to work than before

More than thirty years ago in 1990, around 60 per cent of French people said work was very important to them.

But now, that figure has sank to 21 per cent, with approximately 41 of French people saying leisure time is very important.

In an unsurprising twist, leftwing supporters of Jean-Luc Mélenchon are more than twice as likely to say they don’t want to work compared with more conservative voters, such as those who lean politically towards Emmanuel Macron.

But it was Macron’s furlough scheme, described as one of the most generous in Europe, at which the study pointed the finger.

France paid 100% of the wages for furloughed workers on minimum wage during the Covid-19 pandemic, with the UK paying 80% across the board.

France’s job retention scheme saw the largest take-up largest in Europe with 11.3 people on short-term work either applying for or on job retention at the peak, according to the European Trade Union Institute.

By comparison, the UK saw 6.3 million people on work schemes a the highest point.

Two thirds of people polled recently said they would be happier earning less in exchange for fewer hours.

Step back to 2008, the cusp of the financial crisis, and the stats were entirely reversed. Two thirds of people said they would rather earn more and spent more time working.

‘Work more to earn more’ was the campaign slogan of Nicolas Sarkozy, who won the presidency in May 2007. But much like Sarkozy’s policies, his mantra doesn’t seem to have stuck. 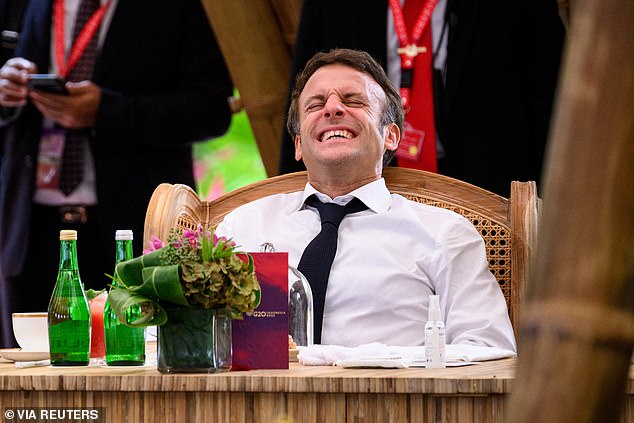 Leftwing supporters of Jean-Luc Mélenchon are more than twice as likely to say they don’t want to work compared with more conservative voters, such as those who lean politically towards Emmanuel Macron (pictured in Bali)

The French deserve a ‘right to idleness’. That was one of the claims made by Sandrine Rousseau, a Green MP, this September, when speaking at the Fête de l’Huma, a leftwing festival in Paris.

She said working hard was ‘essentially a right-wing value’, and said taking breaks was far healthier than the alternative, in a row with fellow leftists.

France introduced the 35-hour work week in the year 2000, classifying any additional hours as overtime.

The country also boasts a generous welfare system, spending 59 per cent of its budget on the benefits system.