An Indian region home to the endangered one-horned rhinoceros has recorded zero poaching in 2022 for the first time in 45 years.

Officials in Assam said no rhinos were poached at the Kaziranga, Manas and Orang national parks or the Pobitora Wildlife Sanctuary.

The horns are normally sold for big money on the black market due to their apparent medicinal qualities.

By 2020 and 2021, the numbers had dwindled to two rhino deaths a year after a concerted effort by the state’s forest and police departments.

The last year on record without any poaching was 1977.

Chief minister Himanta Biswa Sarma, who came to office in May 2021, made zero tolerance to rhino poaching one of his major priorities.

Previously, the police and forest departments worked separately to tackle wildlife crimes but for the first time the effort to crackdown on poaching was coordinated.

Chief wildlife warden MK Yadava told the Hindustan Times: ‘We have intelligence both from forest and police sources about activities and movements of poachers, which helps in action against them.’ 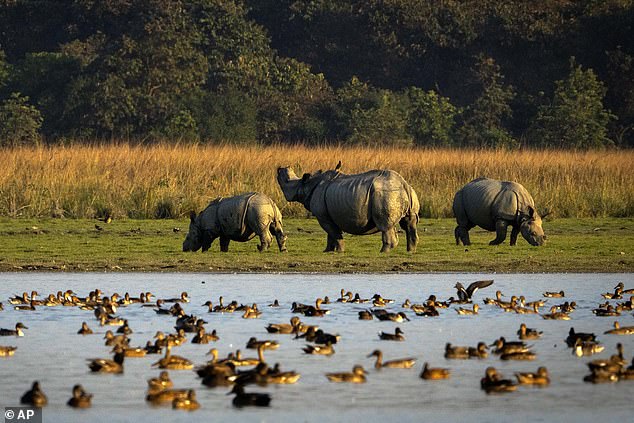 A database of known poachers, past incidents and entry and exit points to the wildlife parks was created, and local boatmen were befriended by the authorities.

If any poacher entered a wildlife area, their phones would trigger an alarm.

On nights with a full moon when poachers often carry out attacks because of the visibility, patrolling was intensified.

In Assam last year, 58 people were arrested for rhino poaching while four more were killed in action with police.

The state is home to around 2,895 one-horned rhinos, the world’s largest population of the endagered animal.

There is an international ban on the trade of rhino horns but poachers often target them because of their value.

The one-horned rhino once ranged throughout the Indo-Gangetic Plain, but their numbers were greatly reduced by hunting.

There are five different species of rhinoceros, and all are threatened to some degree. Although poaching drastically reduced their numbers in the 1900s, numbers have steadily increased in recent years.