Inside Bolsonaro’s Florida ‘exile’: Ex-President lives it up at Jose Aldo’s Orlando bolthole

In the build up to Sunday’s shocking assault on Brazil’s government buildings by his supporters, former president Jair Bolsonaro has been living in self-imposed exile in a Florida resort while rubbing shoulders with notable ex-pats from his home country.

Bolsonaro’s far-right supporters – who refuse to accept his election defeat – stormed Brazil’s Congress, the Supreme Court and presidential palace in the capital, a week after the inauguration of his leftist rival, President Luiz Inácio Lula da Silva.

The attack – reminiscent of the January 6, 2021 invasion of the US Capitol building by supporters of former president Donald Trump, a Bolsonaro ally – took the intervention of military police to bring calm to Brasilia’s Three Powers Square.

But as his country descends into chaos, Bolsonaro has been enjoying a change of pace in Orlando where he has been spotted wandering around a vacation resort neighborhood, and was even snapped tucking in to a box of KFC.

Pictured: Former Brazil President Jair Bolsonaro, center, meets with supporters outside a vacation home where he is staying near Orlando, on Wednesday, January 4, 2023 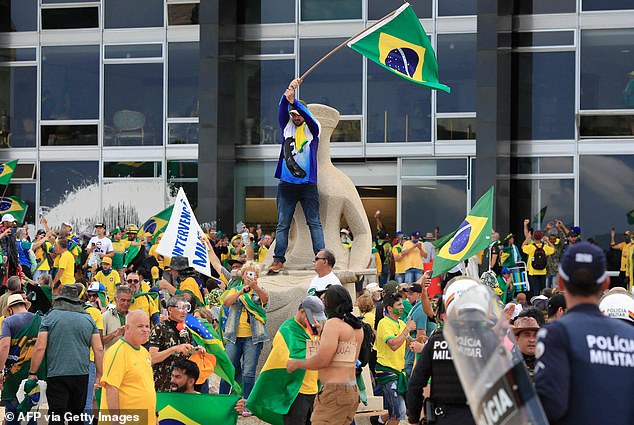 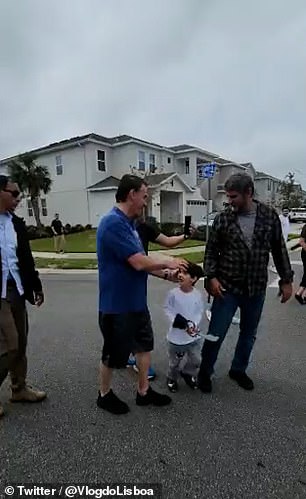 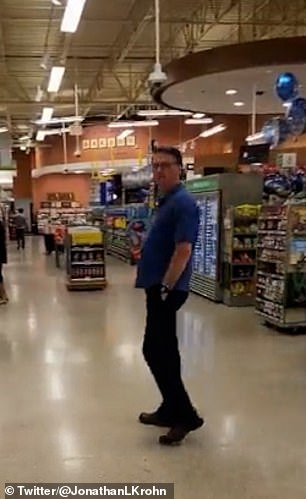 Pictured: Bolsonaro is seen out-and-about in his temporary Florida neighborhood. He left Brazil for Florida on December 30, two days before Lula’s inauguration

How Bolsonaro has been spending his time in Florida

January 2: Former president appears in an Instagram video with Cristiano Piquet, a Brazilian ex-pat living in Florida who hit the headlines when he helped save a women who had fallen into a canal

January 4: Bolsonaro is again see greeting supporters and wandering the aisles of a local Publix grocery store in Orlando

January 8: Ex-president posts on Twitter saying the protests ‘escaped the rule’ of law

January 9: Calls intensify for Bolsonaro to be removed from the US, as reports say Anderson Torres – the security secretary in charge of ensuring the region where the riots took place was safe – was in Florida at the time

According to reports, Bolsonaro – a far-right nationalist – has been staying at the home of Jose Aldo, a retired Brazilian professional MMA fighter and UFC champion.

The pair were pictured inside what appeared to be Aldo’s Orlando home, a found a few miles from Disney World.

The former president posed in MMA gloves, and in one photo even had Aldo jokingly in a headlock – as the pair beamed from ear to ear.

Bolsonaro, who is facing a variety of investigations at home for his time in the presidential office, arrived in Florida late December 30. Reports suggest he plans to stay in the United States for at least a month – and maybe up to three.

Since arriving, he has been filmed wandering around his temporary neighborhood soaking up the adoration of expat Brazilian supporters who flocked to the house where he is staying, and even staged a mini rally in support.

According to the Orlando Sentinel, more than 50 well-wishers – some draped in the yellow and green flags of Brazil – gathered outside the residence.

For 30 minutes, Bolsonaro posed for photos with his supporters, and even wore a USA soccer jersey, as they gathered on the driveway of what was reported to be Jose Aldo’s home.

He also also been filmed inside a local Publix grocery store, with one shopper filming the formal president perusing the aisles before he realized he was on camera. When he did notice the camera, he flashed a slightly awkward thumbs up.

Bolsonaro was also filmed meeting expat turned Florida realtor Cristiano Piquet, a paraglider who made an emergency landing after spotting a struggling and terrified woman clinging to submerged her car in a canal. Piquet alerted a local resident of the woman’s struggle, and they were able to pull her out of the water. 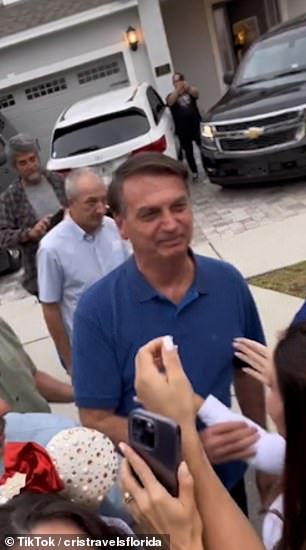 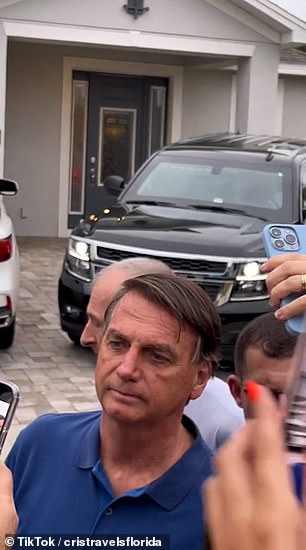 Pictured: Bolsonaro supporters film him outside a home in Florida as he greets them on the driveway. The former Brazilian president arrived in the state on December 30 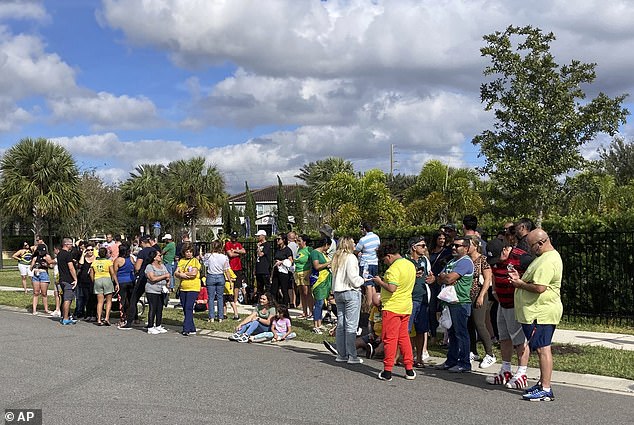 Supporters gather for a rally to show their support for former Brazil President Jair Bolsonaro outside a vacation home where he is staying near Orlando, on Wednesday, January 4 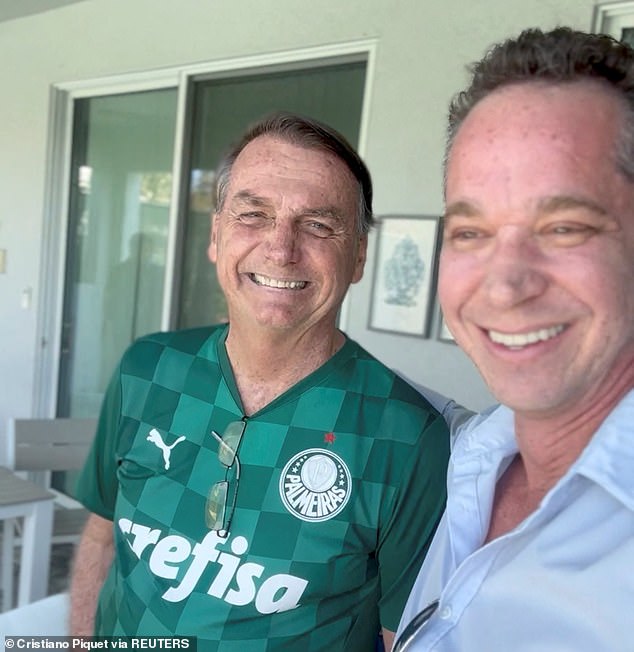 Bolsonaro was filmed meeting Cristiano Piquet (right), a paraglider who made an emergency landing after spotting a struggling and terrified woman clinging to submerged her car in a canal. The pair met soon after Bolsonaro arrived in Florida

Piquet is also the owner of Piquet Realty, a real estate company based in Miami, Florida, and spends his time doing paragliding, skydiving, boating, and more.

Meanwhile, it was reported on Monday that Brasilia Gov. Ibaneis Rocha had fired Anderson Torres, the security secretary of the federal district. He was in charge of ensuring the safety of the area at the time of Sunday’s attack on the government.

The Bolsonaro ally was in Florida at the time of the announcement, according to the BBC and Brazilian newspaper Estadao.

The timing of Bolsonaro’s arrival to Florida raised eyebrows on account of it meaning that he missed the inauguration of his successor Lula on January 1 – breaking with tradition that calls for a symbolic peaceful transfer of power.

The head of Brazil’s electoral authority rejected the request from Bolsonaro and his political party to nullify ballots cast on most electronic voting machines.

Now, US president Joe Biden is facing mounting calls to remove Bolsonaro from his self-imposed bolt-hole.

Democratic congressman Joaquin Castro told CNN: ‘Bolsonaro should not be in Florida. The United States should not be a refuge for this authoritarian who has inspired domestic terrorism in Brazil. He should be sent back to Brazil.’

‘The US must cease granting refuge to Bolsonaro in Florida,’ she tweeted. ‘Nearly two years to the day the US Capitol was attacked by fascists, we see fascist movements abroad attempt to do the same in Brazil.’ 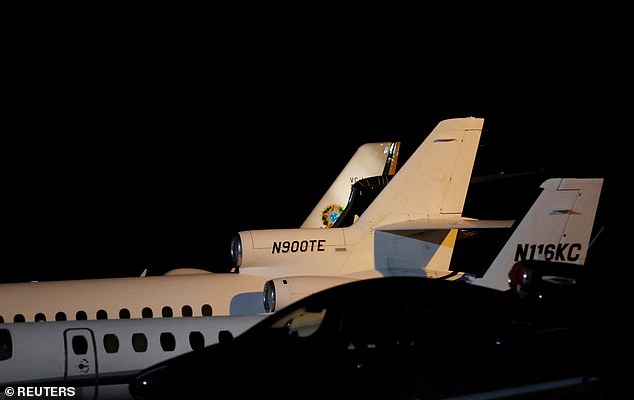 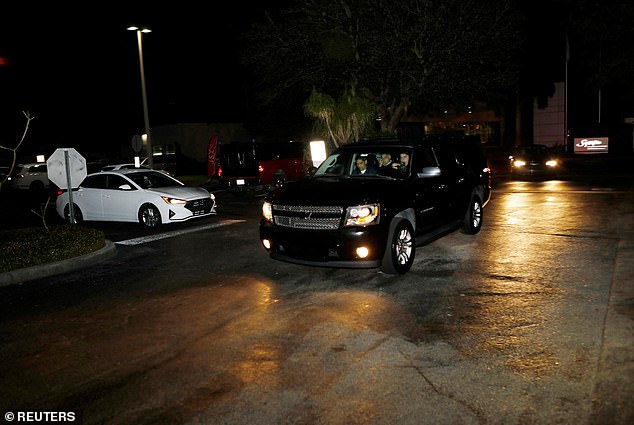 From Florida on Sunday, Bolsonaro rejected the accusation that he inflamed his supporters, resulting in the storming of the government buildings.

He said on Twitter that peaceful demonstrations were democratic but the invasion of government buildings ‘crossed the line.’

‘Peaceful demonstrations, in the form of the law, are part of democracy. However, depredations and invasions of public buildings as occurred today, as well as those practiced by the left in 2013 and 2017, escape the rule,’ he wrote.

‘Throughout my mandate, I have always been within the four lines of the Constitution, respecting and defending the laws, democracy, transparency and our sacred freedom. In addition, I repudiate the accusations, without evidence, attributed to me by the current head of the executive of Brazil.’

Bolsonaro is facing at least four Supreme Court probes in Brazil, including allegations he leaned on the federal police to protect his sons, spread falsehoods about the election and cultivated a troll farm spreading disinformation.

Bolsonaro also faces 12 requests for investigation at the Superior Electoral Court (TSE) for baseless claims Brazil’s electoral system is liable to fraud, as well as alleged abuses of power for granting economic benefits to win votes. If the TSE upholds those accusations, Bolsonaro could be declared ineligible for elected office.

Experts said Lula will likely tread carefully for fear of turning Bolsonaro into a martyr. Appeasing his fans and co-opting his allies may be the best way to neutralize him. 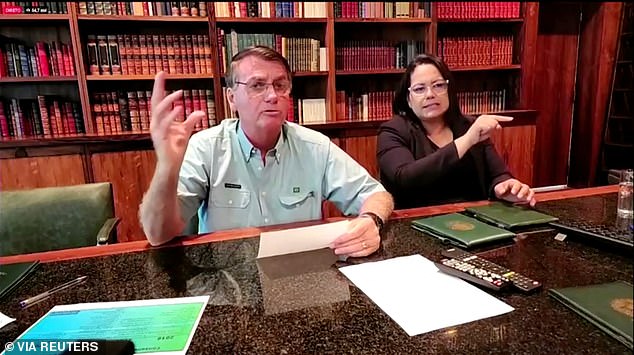 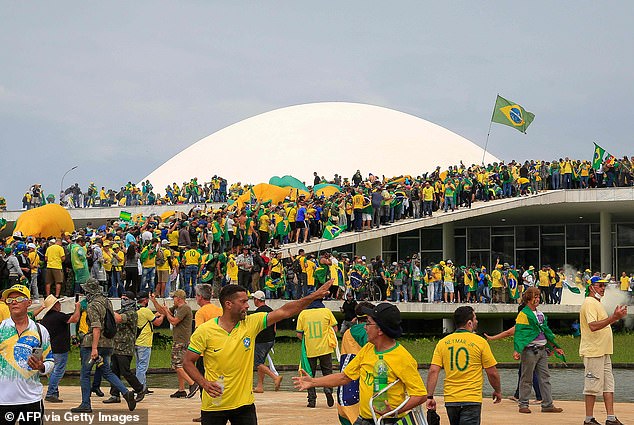 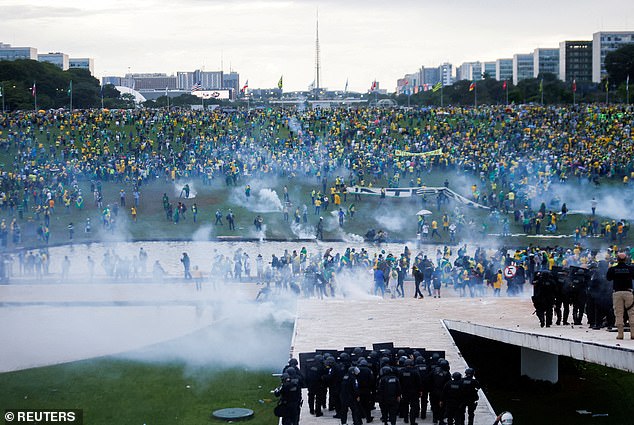 The former president has repeatedly sparred with Supreme Court justices.

On Sunday, the room where they convene was trashed by the rioters. They sprayed fire hoses inside the Congress building and ransacked offices at the presidential palace. Windows were broken in all of the buildings.

TV channel Globo News showed protesters wearing the green and yellow colors of the national flag that also have come to symbolize the nation’s conservative movement streaming into the government buildings.

Police fired tear gas to try to regain control of the buildings.

About 6:30 p.m. local time (4:30 p.m. EST), less than four hours after the storming, security forces were shown on television backing protesters away from the Supreme Court and marching them down a ramp to the presidential palace with their hands secured behind their backs.

But with the damage already done, many in Brazil were questioning how the police had ignored abundant warnings, were unprepared or were somehow complicit.

Lula said at his news conference there was ‘incompetence or bad faith’ on the part of police, and that they had been likewise complacent when Bolsonaro supporters rioted in the capital weeks ago. He promised those officers would be punished and expelled from the corps. 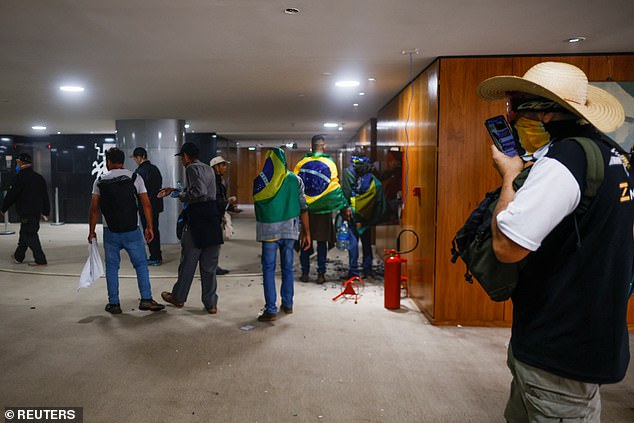 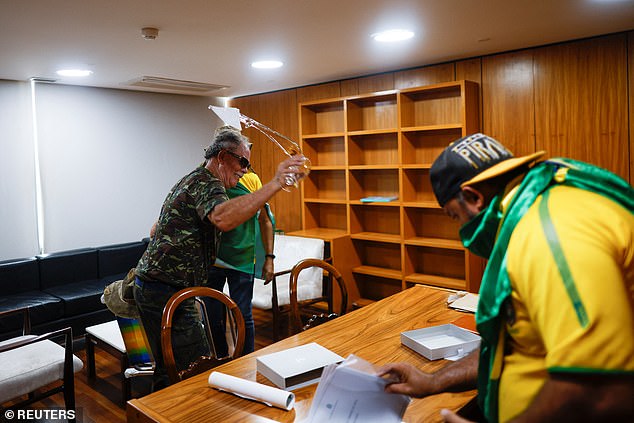 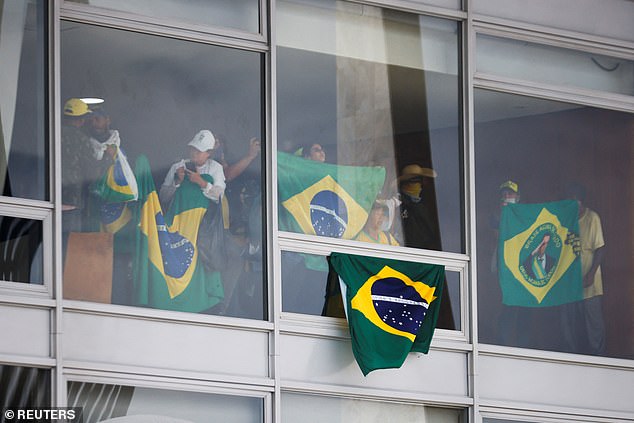 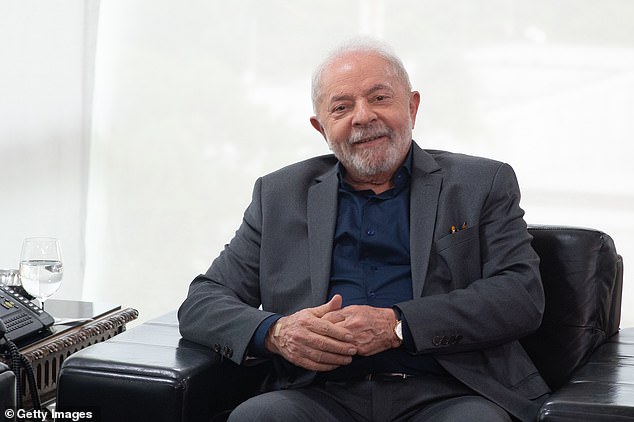 Bolsonaro supporters have been protesting Lula (pictured) won the election on October 30, blocking roads, setting vehicles on fire and gathering outside military buildings, urging the armed forces to intervene.

Political analysts have warned for months that a storming was a possibility in Brazil, given that Bolsonaro has sown doubt about the reliability of the nation’s electronic voting system – without any evidence.

The results were recognized as legitimate by politicians from across the spectrum, including some Bolsonaro allies, as well as dozens of foreign governments.

Unlike the 2021 attack in the U.S., it is likely that few officials were working in the Brazilian Congress and Supreme Court on a Sunday.

The head of Brazil’s electoral authority rejected the request from Bolsonaro and his political party to nullify ballots cast on most electronic voting machines.

Snowboarder loses grip of tow lift and wipes out skiers, leaving four of them in hospital