China’s former president Jiang Zemin who steadied the country after the Tiananmen Square massacre and oversaw a decade of explosive growth has died aged 96.

The former premier, who was criticised in the West for human rights abuses, drove China to become a major superpower thanks to his economic reforms and saw Hong Kong returned from British rule in 1997.

His death comes at a time when the spirit of the Tiananmen protests have been reignited in China, with pro-democracy demonstrators defiantly standing up to the authoritarian regime over draconian Covid lockdowns and widespread repression.

The national unrest is the biggest challenge to power since 1989 and Jiang’s death could revive memories of rebellion or be utilised by Xi Jinping as a moment for the country to come together in his memory.

A surprise choice to lead a divided Communist Party after the 1989 Tiananmen crackdown, Jiang saw China through history-making changes including a revival of market-oriented reforms and Beijing’s entry into the World Trade Organisation in 2001.

Even as China opened to the outside, Jiang’s government stamped out dissent at home.

It jailed human rights, labour and pro-democracy activists and banned the Falun Gong spiritual movement, which it viewed as a threat to the Communist Party’s monopoly on power.

Jiang gave up his last official title in 2004 but remained a force behind the scenes in the wrangling that led to the rise of current President Xi Jinping, who took power in 2012.

Xi has stuck to Jiang’s mix of economic liberalisation and strict political controls.

Initially seen as a transitional leader, Jiang was drafted on the verge of retirement with a mandate from then-paramount leader Deng Xiaoping to pull together the party and nation.

But he proved transformative. In 13 years as Communist Party general secretary, the top position in China, he guided China’s rise to global economic power by welcoming capitalists into the Communist Party and pulling in foreign investment after China joined the WTO. 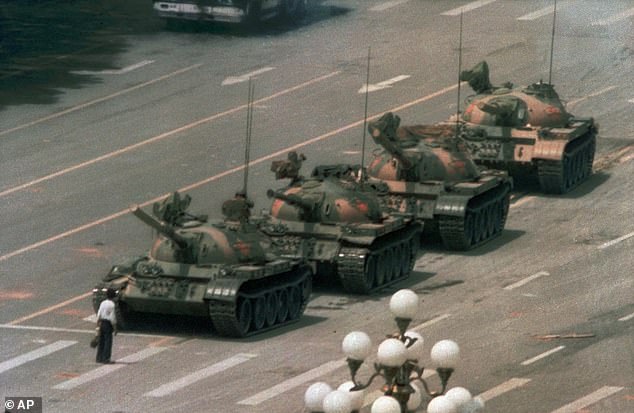 The iconic image of a man standing in front of a line of tanks in Tiananmen Square in 1989, after which Jiang rose to power 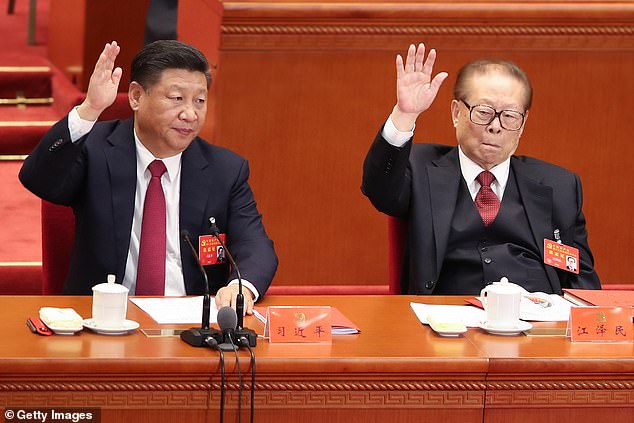 Queen Elizabeth II shares a toast with Chinese President Jiang Zemin during a banquet at the Chinese Embassy on October 21, 1999 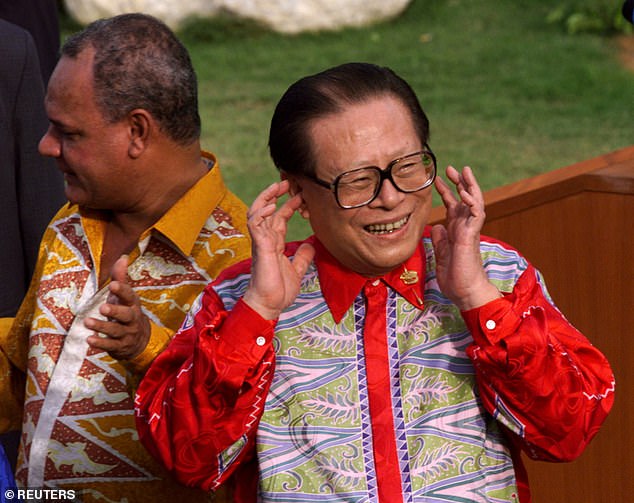 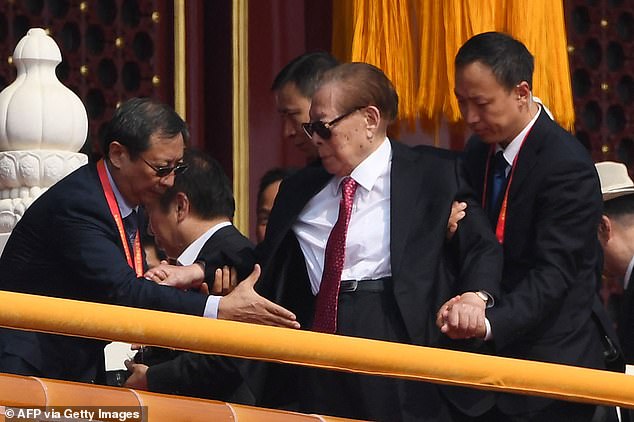 What was the Tiananmen Square massacre?

The Tiananmen Square massacre was the culmination of a series of protests in China in the spring of 1989.

After decades of repression under the Chinese Communist Party (CCP) there was a growing desire for political and economic reform among university students and others.

Following the death of Hu Yaobang, a former CCP general secretary who had advocated for democratic reforms before he was forced to resign, students rallied against the Government.

On the day of his funeral on April 22, 1989, tens of thousands gathered in Tiananmen Square in Beijing, to demand economic, social and political liberalisation.

This was followed by similar demonstrations in Shanghai, Nanjing, Xi’an and Chengdu.

Hardliners in the CCP, driven by premier Li Peng and elder statesman Deng Xiaoping, called for a merciless crackdown on the protesters for fear of them spreading further.

Martial law was declared in Beijing in May, but attempts by soldiers to try and reach the protesters in Tiananmen Square were foiled by locals who blocked the streets.

Then in the early hours of June 4, tanks and heavily armed troops marched on the square, firing and crushing anyone who got in their way.

The CCP has banned all official commemorations of the incident and has attempted to suppress references to it.

He presided over the nation’s rise as a global manufacturer, the return of Hong Kong and Macao from Britain and Portugal and the achievement of a long-cherished dream: winning the competition to host the Olympic Games after an earlier rejection.

A former soap factory manager, Jiang capped his career with the communist era’s first orderly succession, handing over his post as party leader in 2002 to Hu Jintao, who assumed the presidency the following year.

Jiang tried to hold onto influence by staying on as chairman of the Central Military Commission, which controls the party’s military wing, the 2.3 million-member People’s Liberation Army. He gave up that post in 2004 following complaints he might divide the government.

Even after he left office, Jiang had influence over promotions through his network of proteges.

He was said to be frustrated that Deng had picked Hu as the next leader, blocking Jiang from installing his own successor.

But Jiang was considered successful in elevating allies to the party’s seven-member Standing Committee, China’s inner circle of power, when Xi became leader in 2012.

Portly and owlish in oversize glasses, Jiang was an ebullient figure who played the piano and enjoyed singing, in contrast to his more reserved successors, Hu and Xi.

He spoke enthusiastic if halting English and would recite the Gettysburg Address for foreign visitors. On a visit to Britain, he tried to coax Queen Elizabeth II into singing karaoke.

‘Jiang had faded from public sight and last appeared publicly alongside current and former leaders atop Beijing’s Tiananmen gate at a 2019 military parade celebrating the party’s 70th anniversary in power. He was absent from a major party congress last month where former leaders are given seats in recognition of their service.

Official biographies downplay his family’s middle-class background, emphasising instead his uncle and adoptive father, Jiang Shangqing, an early revolutionary who was killed in battle in 1939.

After graduating from the electrical machinery department of Jiaotong University in Shanghai in 1947, Jiang advanced through the ranks of state-controlled industries, working in a food factory, then soap-making and China’s biggest automobile plant. 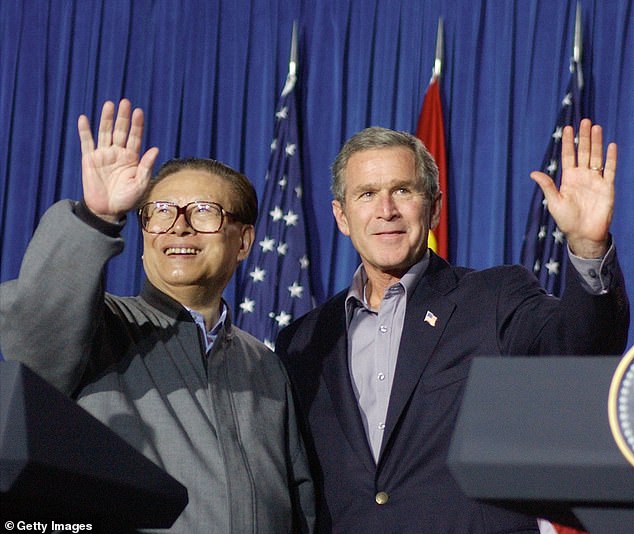 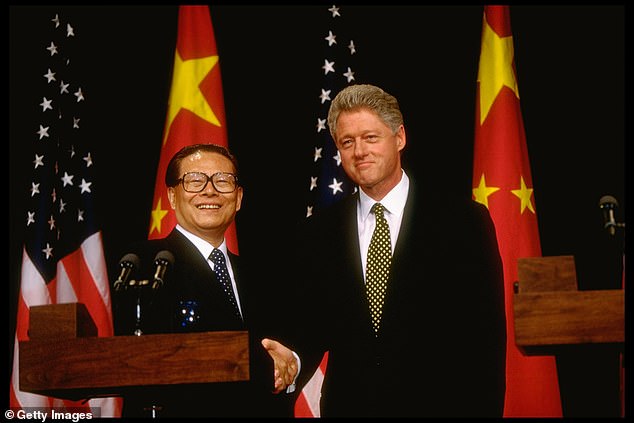 Like many technocratic officials, Jiang spent part of the ultra-radical 1966-76 Cultural Revolution as a farm labourer.

His career rise resumed, and in 1983 he was named minister of the electronics industry, then a key but backward sector the government hoped to revive by inviting foreign investment.

As mayor of Shanghai in 1985-89, Jiang impressed foreign visitors as a representative of a new breed of outward-looking Chinese leaders.

He was preparing to retire when Deng picked him in 1989 to replace party General Secretary Zhao Ziyang, who was purged due to his sympathy for the Tiananmen protesters and held under house arrest until his death in 2005.

A tough political fighter, Jiang defied predictions that his stint as leader would be short. He consolidated power by promoting members of his ‘Shanghai faction’ and giving the military double-digit annual percentage increases in spending.

Foreign leaders and CEOs who shunned Beijing after the crackdown were persuaded to return. When Deng emerged from retirement in 1992 to push for reviving market-style reform in the face of conservative opposition after the Tiananmen crackdown, Jiang followed. 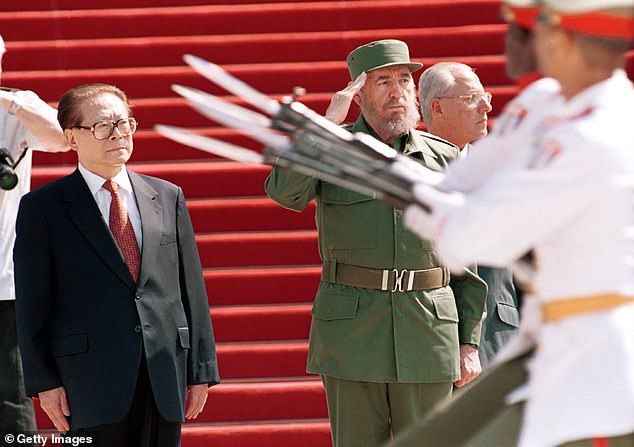 Cuban President Fidel Castro, right, salutes an honor guard as he stands with Chinese President Jiang Zemin at the Palace of the Revolution in Havana in 2001 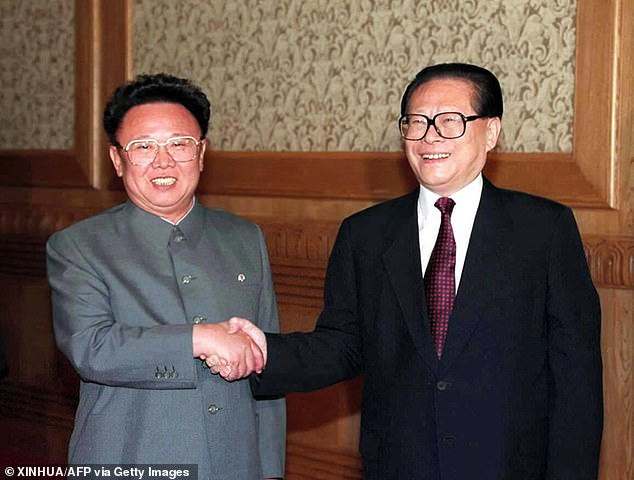 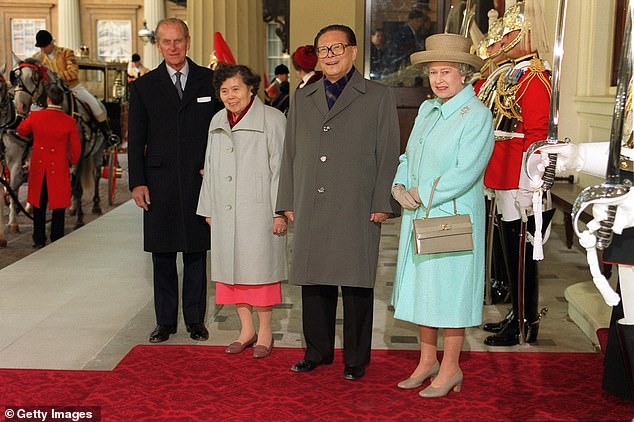 Queen Elizabeth II and Prince Philip, Duke of Edinburgh greet the President of the People’s Republic of China Jiang Zemin and his wife Madame Wang Yeping at Buckingham Palace on October 19, 1999

He supported Premier Zhu Rongji, the party’s No. 3 leader, who forced through painful changes that slashed as many as 40 million jobs in state industry in the late 1990s.

After 12 years of negotiations and a flight by Zhu to Washington to lobby the Clinton administration for support, China joined the WTO in 2001, cementing its position as a magnet for foreign investment.

His highest-profile target was Falun Gong, a meditation group founded in the early ’90s. Chinese leaders were spooked by the group’s ability to attract tens of thousands of followers, including military officers.

Activists who tried to form an opposition China Democracy Party, a move permitted by Chinese law, were sentenced to up to 12 years in prison on subversion charges.

‘Stability above all else,’ Jiang ordered, in a phrase his successors have used to justify intensive social controls.

It fell to Jiang, standing beside Britain’s Prince Charles, to preside over the return of Hong Kong on July 1, 1997, symbolising the end of 150 years of European colonialism. The nearby Portuguese territory of Macao was returned to China in 1999.

Hong Kong was promised autonomy and became a springboard for mainland companies to go abroad. Meanwhile, Jiang turned to coercion with Taiwan, the self-ruled island Beijing says is part of its territory. 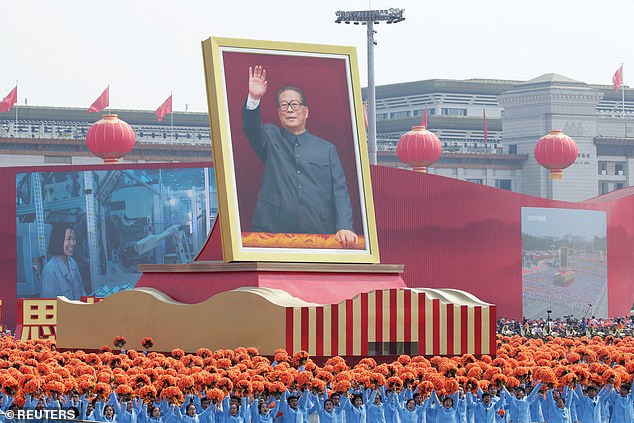 During Taiwan’s first direct presidential election in 1996, Jiang’s government tried to intimidate voters by firing missiles into nearby shipping lanes. The United States responded by sending warships to the area in a show of support.

At the same time, trade between the mainland and Taiwan grew to billions of dollars a year.

China’s economic boom split society into winners and losers, as waves of rural residents migrated to factory jobs in cities, the economy grew sevenfold and urban incomes by nearly as much.

One of Jiang’s sons, Jiang Mianheng, courted controversy in the late 1990s as a telecommunications dealmaker and later the chairman of phone company China Netcom Co.

Critics accused him of misusing his father’s status to promote his career, a common complaint against the children of party leaders.

Jiang Mianheng, who has a Ph.D. from Drexel University, went on to hold prominent academic positions, including president of Shanghai Tech University in his father’s old power base.

Jiang is survived by his two sons and his wife, Wang Yeping, who worked in government bureaucracies in charge of state industries.