TV reporter is robbed while talking about high crime… by a PARROT! Bird swoops on journalist’s shoulder and flies off with his earpiece in Chile

This is the hilarious moment a parrot perches on a TV reporter’s shoulder during a live broadcast about crime and insecurity – before stealing his earpiece and flying off with it.

Chilean newsman Nicolas Krumm was informing viewers about a house burglary when the bird surprised him.

He could be seen motioning to his cameraman to make sure he focused on the unexpected guest.

But seconds later the monk parakeet decided the main attraction was Nicolas’s earpiece and he plucked it out of his left ear.

The stunned reporter, who works for Chilevision, tried to grab it back but was too slow and the bird disappeared with its prize as he turned round and exclaimed: ‘It’s just taken my earpiece.’ 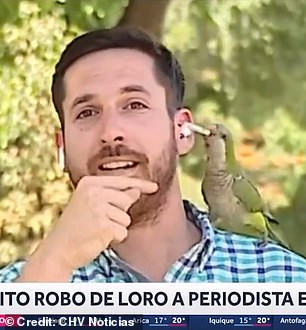 Chilean newsman Nicolas Krumm was reporting on a burglary when the parrot surprised him. He asked the cameraman to make sure the bird was in view as it was ‘picturesque’ 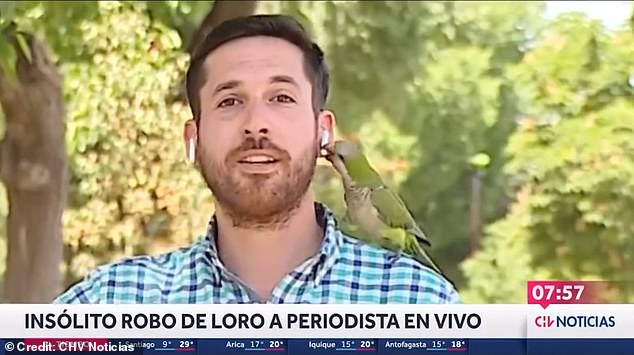 Moments later the parrot decided the main attraction was Nicolas’ earpiece. Krumm later said the bird had been watching them from railings nearby

He explained afterwards to a studio presenter: ‘We were doing a midday broadcast and halfway through I felt a presence close to me and realized it was a parrot.

‘I tried to alert the cameraman more than anything because it was picturesque and I thought it wasn’t something that happens every day.

‘There are people who spend years training parrots to get them to rest on their shoulders. 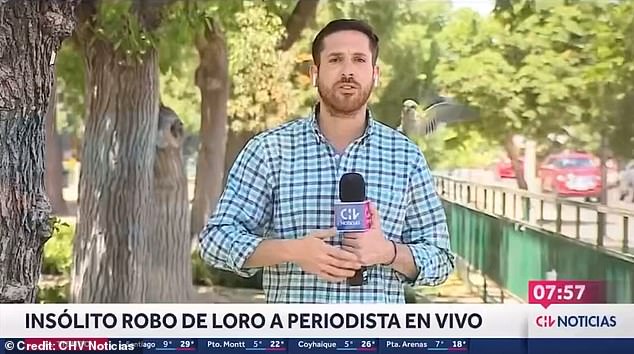 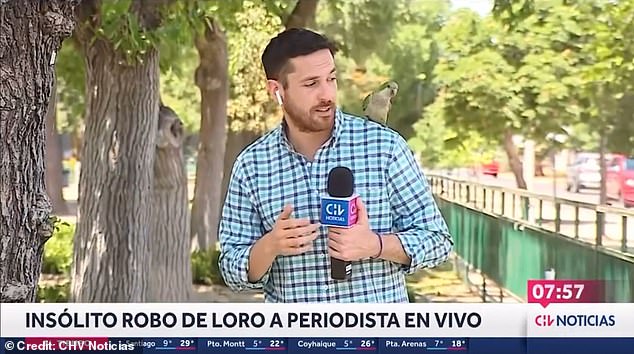 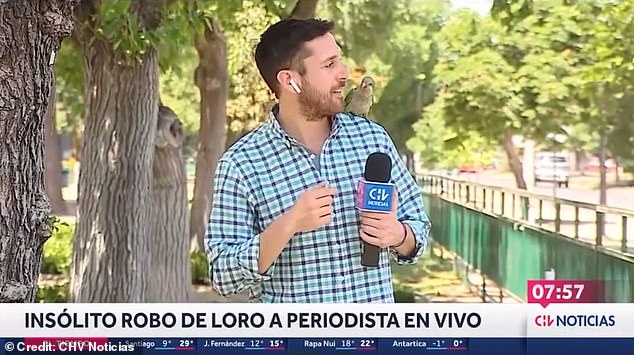 ‘The parrot had been watching us from railings nearby and I think my earpiece had got its attention because you can see it looking at it out of the corner of its eye before it takes it.

‘I had to carry on talking because we were in the middle of a live broadcast.

‘Right at the moment when I’m trying to make sure the cameraman has seen the parrot, it takes my earpiece.

‘It wasn’t something I wanted to comment on right at that second because we were dealing with a sensitive subject which was a residential break-in and I considered the most prudent thing was to carry on with the broadcast.’ 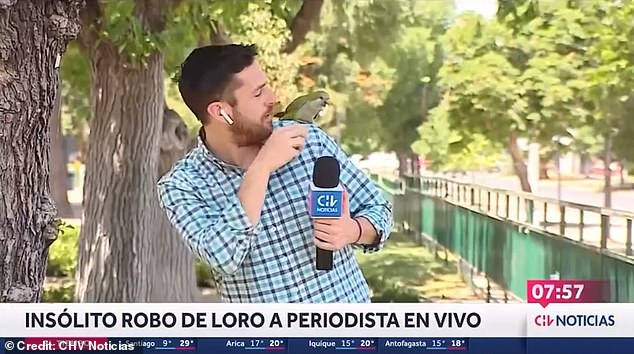 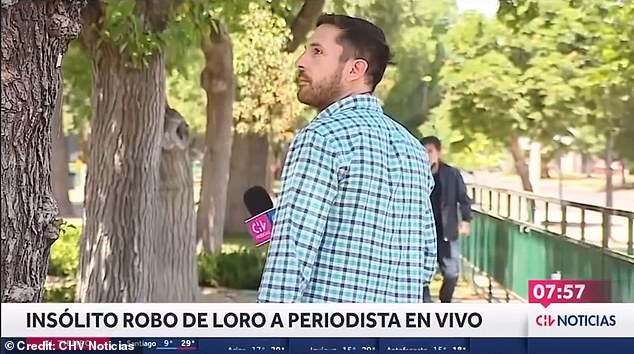 Nicolas also revealed his cameraman had managed to find the earpiece and retrieve it from a nearby patch of grass during a subsequent search.

In March 2016 TV a rogue parrot landed on reporter Britney Klein’s shoulder as she was about to film a broadcast for Australia’s Nine News.

The video went viral because, forgetting she was about to broadcast, the news reporter let slip a swearword before pleading and shouting at the cameraman: ‘Get it off me.’

Putin faces getting rid of electricity with electric power-brokers ‘at every single other’s throats’, pro statements