Amid rumours about his poor health, a video showing Vladimir Putin’s shaking hand as he greeted Belarus’s leader resurfaced earlier this month.

The clip, which was filmed just before Russia’s invasion of Ukraine in February, showed him gripping a chair and pressing his hand to his chest to stop it shaking as he greeted Alexander Lukashenko.

It fueled further speculation of the state of his health after footage and images appeared to show his bloated face and slouching posture.

But the scenes of Putin’s apparent struggles are reminiscent of a clip that showed Adolf Hitler’s own failing health as Germany faced total defeat in the Second World war. 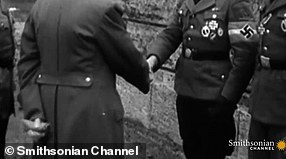 A resurfaced video showing Vladimir Putin’s hand shaking as he greeted Belarus’s leader Aleksander Lukashenko in February is reminiscent of a clip that revealed Adolf Hitler’s own failing health as his country faced total defeat in the Second World War.

In what was one of the last times the dictator was seen alive outside of his Berlin bunker, a propaganda video filmed in April 1945 showed him decorating members of the Hitler Youth who had been called up to defend Berlin.

The film was supposed to show how Hitler was still in command, even as the Soviet Union’s troops closed on the capital.

But a telling part of the footage was cut from the final version and was supposed to have been destroyed.

The clip, which was discovered in an East German film laboratory in the 1970s, showed the Nazi leader’s left hand shaking violently as he held it behind his back while greeting military officers during the same trip outside his bunker.

Many historians and experts believe that Hitler was suffering from Parkinson’s disease at the time the video was filmed. The condition hampers muscle control and impairs mobility.

He told the Smithsonian Channel in 2014 that symptoms of shaking in his left hand were ‘for a time’ cured after he was injured by the bomb that went off in the 1944 attempt on his life.

‘As he said, that’s not the way I would choose of curing it. But soon after that, the shaking came back in his right side.

‘He began to drag his feet and shuffle. He began to speak in a more flat, less animated sort of way. Normally.’

Comparisons of footage filmed in 1940 and 1944 showed how Hitler’s mobility had appeared to decline during the course of the war.

Surviving records show how Hitler’s personal doctor Theodor Morell first noted Hitler’s tremor in 1941 but put it down to stress.

Then, in the final days of the war, he concluded that Hitler was suffering from ‘shaking palsy’ – the original name for Parkinson’s disease.

As well as impairing thought processes, Parkinson’s can impair posture and muscle control.

Hitler killed himself inside his bunker, which was built near Berlin’s Reich Chancellery, on April 30, 1945.

The mass murderer took his own life alongside his wife Eva Braun, who he had married the day before.

By then, Germany was on the brink of total defeat against Allied and Russian forces.

The Nazi dictator had launched a doomed invasion of the Soviet Union in 1941 which saw Joseph Stalin’s forces fight back and ultimately triumph against German troops.

Earlier this month human rights officials claimed that, just like in Nazi Germany, the Kremlin has resorted to recruiting children to boost its troop numbers in eastern Ukraine.

Moscow was said to be recruiting from youth clubs and conscripting 16-year-olds to replace the estimated 30,000 soldiers either killed, wounded or captured so far in the war.

So-called ‘patriotic clubs’ sprang up in Russian-occupied parts of eastern Ukraine following its invasion in 2014 as part of a campaign to promote the country’s culture in Luhansk and Donetsk.

The Ukrainian parliament commissioner on human rights Lyudmyla Denisova said: ‘The occupation authorities [of Luhansk and Donetsk] are conducting the mobilisation of children who participated in the so-called patriotic clubs, to the levels of illegal weapons formations.

‘They have been doing military training and there have been deaths among these teenagers [in Ukraine].

‘Now they are promoting the entry into the army of civilians, including children in the temporarily occupied territories.

‘In doing so, the Russian Federation has violated the laws and customs of war provided by the 1949 Geneva Convention on the protection of civilians… and the rights of children.

‘The recruitment of children is a violation of international law.’