Vladimir Putin has missed an annual ice hockey match where he usually plays the starring role, raising fresh doubts over his health amid persistent rumours the Russian strongman is suffering from multiple medical issues.

The Russian leader, 69, has made a habit of gliding over the ice at an annual match during Russia’s Night Hockey League National Festival in May.

But this year while Putin was ‘expected’ to take part, he instead sent a video message wishing competitors ‘good luck in their ice battles’ – despite the President being in the Black Sea report of Sochi where the match took place on Tuesday.

It is only the second time that the President has missed the game since 2012, with the first instance being due to health problems.

In May 2021, Putin boasted that ice hockey offered him longevity, and he used his appearance to scotch rumours over his health at the time.

‘You extend your life, you make it of better quality and deeper meaning,’ he said.

But Putin’s absence from the ice hockey gala match has added to speculation about the Russian leader’s health, which has reportedly been in decline since his invasion of Ukraine.

Vladimir Putin has missed annual ice hockey match where he usually plays the starring role (pictured in 2021), raising fresh doubts over his health amid persistent rumours the Russian strongman is suffering from multiple medical issues 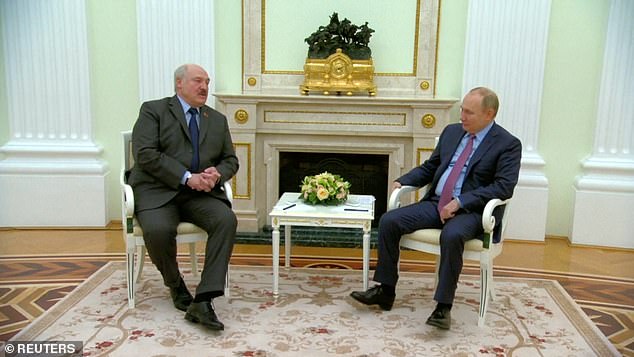 Putin gripped the armrest of his chair during a meeting with Alexander Lukashenko earlier this year, after footage showed his arm shaking

Two years before he decided to invade Ukraine, rumours began swirling about Putin’s health including suggestions he had undergone cancer surgery.

Valery Solovei, a political analyst and prominent Putin critic, began spreading the rumour in late 2020 while also suggesting he was suffering from Parkinson’s.

The rumours gained such traction that the Kremlin was forced to go on record and deny them, with Putin spokesman Dmitry Peskov insisting his boss was in ‘excellent health’ and any rumour to the contrary was ‘complete nonsense’.

But the whispering has steadfastly refused to die out and has intensified since the war in Ukraine began, with critics suggesting that Putin looks unwell in TV appearances and is noticeably puffy around his face.

Leaked footage of a meeting with Belarusian president Alexander Lukashenko in the early stages of the war also appeared to show pronounced arm and leg tremours.

Shaking is one of the main symptoms of Parkinson’s – a condition that Hitler is thought to have suffered from towards the end of the Second World War.

As Putin sat down with Lukashenko he was seen gripping the arm of his chair – perhaps in an attempt to head off any more shaking. 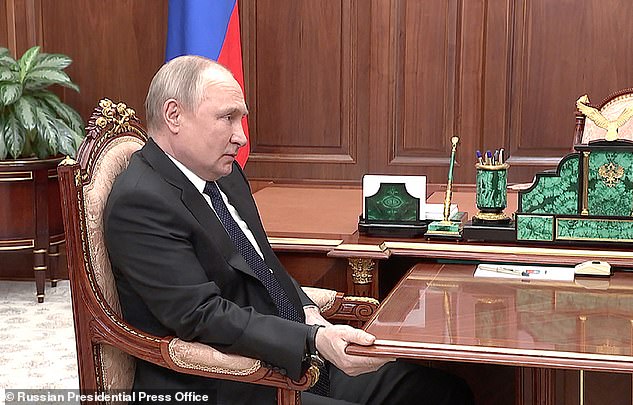 Putin also gripped the edge of a table during a recent meeting with his defence chief, perhaps covering up the signs of a tremour

He then pulled a similar pose – this time gripping the edge of a table – while meeting defence minister Sergei Shoigu a few weeks later.

Then came an Easter Sunday mass during which the Russian leader made unusual fidgeting motions with his lips while listening to the service.

He could be seen making the same lip motions following Monday’s Victory Day parade, as he walked with Shoigu to lay a wreath. During the parade, Putin was also seen limping and with a blanket over his lap as he sat down.

Putin’s bloated face has sparked claims he is undergoing steroid treatment, whilst reports have suggested Putin is ‘constantly’ accompanied by a doctor specialising in thyroid cancer.

Surgeon Yevgeny Selivanov, of Moscow’s Central Clinical Hospital, has flown to the Russian leader no less than 35 times in Black Sea resort Sochi, his favourite place of residence. 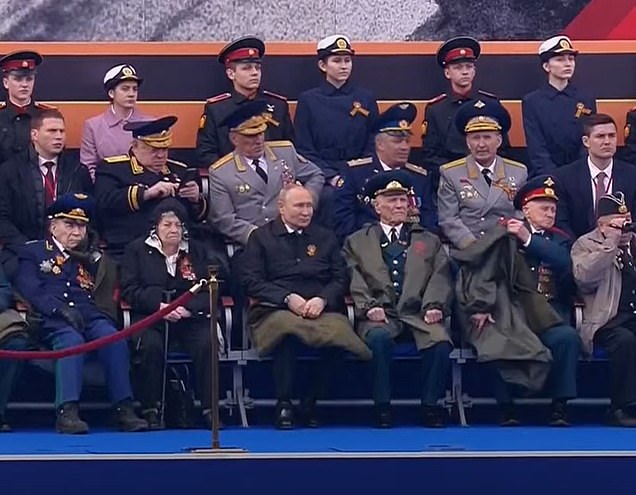 Vladimir Putin (centre) watched part of Monday’s Victory Day parade in Moscow with a blanket draped over his lap, while geriatric war veterans sat around him uncovered

The respected doctor’s thesis – showing his area of medical expertise – was entitled: ‘Peculiarities of diagnostics and surgical treatment of elderly and senile patients with thyroid cancer’.

Another reason why Putin might have chosen to be absent from the ice hockey match might have been security. Two days ago, a 77-aircraft flypast was cancelled on Red Square amid claims he was concerned about an ‘aerial strike’ at the annual Victory Day parade.

Putin’s spokesman Dmitry Peskov said the president would not take part in the 2022 ice hockey festival.

Instead in a video message Putin said: ‘I wish you good luck in your ice battles and all the best. 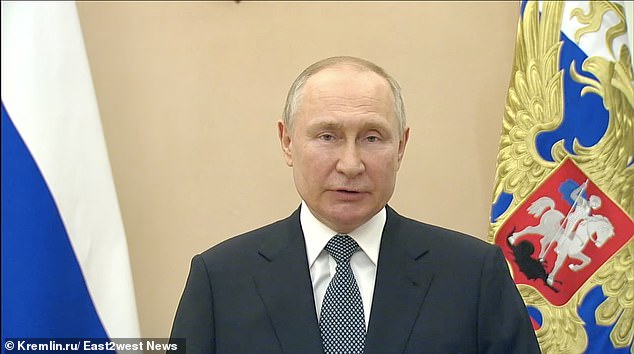 While Putin was ‘expected’ to take part, he instead sent a video message (pictured) wishing competitors ‘good luck in their ice battles’ – despite the President being in the Black Sea report of Sochi where the match will take place

A Moscow source said: ‘This was always a firm date in his diary. Something must be wrong for him to be a no-show.’

Regional Kuban News had reported: ‘It had been expected that Vladimir Putin would also play for Legends of Hockey, but in early May, the press secretary of the President of the Russian Federation, Dmitry Peskov, announced that the head of state would not take part in the game.

‘It is only the second time in the history of the gala matches since 2012 that the President is missing this game.

‘In 2013, he held a symbolic face-off, and watched the match from the stands.’

At the time, this was also blamed on health issues.