Russia has ‘very nearly exhausted’ its supply of Iranian-built drones that it has been using to wreak terror on Ukraine, according to Britain’s Ministry of Defence.

Since October 10, Russia has launched six massive aerial attacks against Ukraine’s power grid and other infrastructure, and has used the Unmanned Aerial Vehicles (UAVs) to overwhelm Ukraine’s air defences and strike deep into Kyiv’s territory.

Analysts believe Moscow has been using the drones to compensate for a shortage of cruise missiles, having conducted thousands of strikes across Ukraine since Vladimir Putin launched his brutal invasion of the country on February 24.

But now, after carrying out hundreds of attacks with the Iranian-made Shahed-136 ‘suicide’ drones, Britain’s MoD has said Russia’s UAV supply is also running low.

Russia is ‘very likely’ to have nearly exhausted its supply of Iranian-built drones (seen flying over Kyiv) that it has been using to wreak terror on Ukraine, according to Britain’s MoD

In its update on Wednesday, the MoD also said that having targeted military targets with the drones, as well as Ukraine’s energy grid, Russian commanders now appear to be prioritising medical facilities as targets for its drone arsenal.

The update came shortly after a newborn baby was killed in a Russian strike on a maternity ward in the city of Vilniansk, in Ukraine’s southern Zaporizhzhia region, which Moscow claims to have annexed.

‘Since September, Russia has likely launched hundreds of Iranian-manufactured uncrewed aerial vehicles (UAVs) against Ukraine,’ the MoD said in an update on Wednesday. ‘These have been a mixture of one way attack (OWA) UAVS and more traditional reusable armed systems,’ it said.

‘Russia has largely used these weapons against tactical military targets and the Ukrainian electricity grid. However, recently Russian commanders likely also wanted Iranian-sourced UAVs to prioritise medical facilities as targets of opportunity, and strike them with guided munitions if identified,’ the update added.

The MoD said Russia ‘likely conceived of the UAV campaign to make up for its severe shortage of cruise missiles,’ but that the approach has had ‘limited success’.

‘Most UAVs launched have been neutralised,’ it noted. No OWA UAVS strikes have been publicly reported since around 17 November 2022.’

While the update provided some hope that the frequency of the drone strikes may be slowing down, the MoD added that Russia would likely be able to purchase more of the deadly devices from foreign countries. 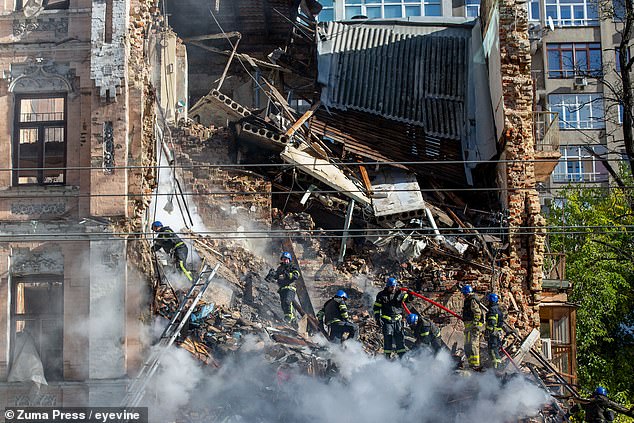 Since October 10, Russia has launched six massive aerial attacks against Ukraine’s power grid and other infrastructure, and has used the Unmanned Aerial Vehicles (UAVs) to overwhelm Ukraine’s air defences. Pictured: Ukrainian rescuers work at the site of a residential building destroyed by a Russian drone strike in Kyiv, October 17 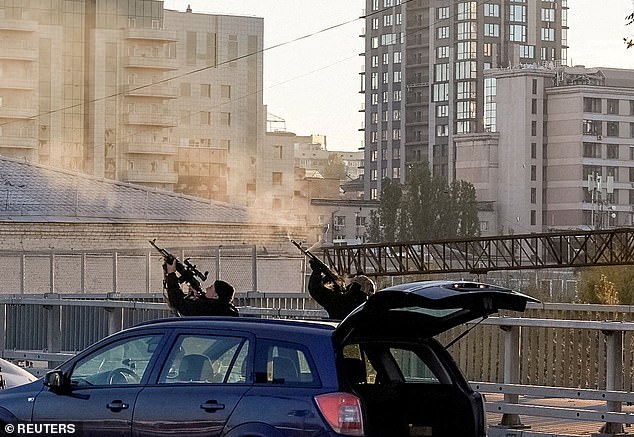 Pictured: Police officers shoot at a drone during a Russian drone strike, which local authorities consider to be Iranian-made Shahed-136 unmanned aerial vehicles (UAVs), amid Russia’s attack on Ukraine, in Kyiv, Ukraine October 17, 2022 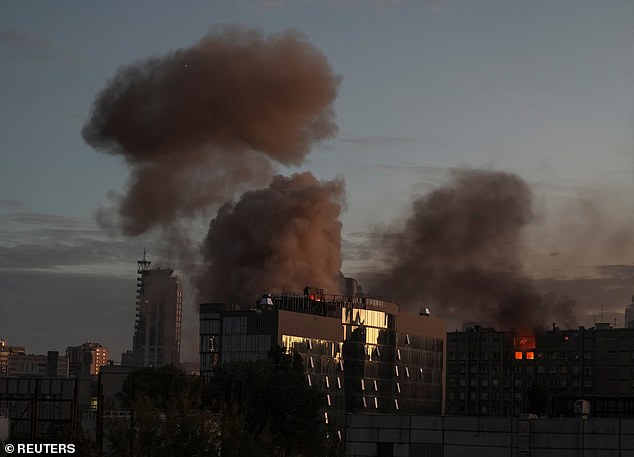 Smoke rises after a Russian drones strike, which local authorities consider to be Iranian made unmanned aerial vehicles (UAVs) Shahed-136, amid Russia’s attack on Ukraine, in Kyiv

Russia’s use of the Shahed-136 ‘suicide’ drones was first reported in October, when Moscow launched a barrage of strikes on cities across Ukraine.

Ukraine accused Russia of launching the drones from Moscow’s ally and joint neighbour Belarus, while the west accused Iran of supplying the weapons to Russia.

Tehran has denied that it is supplying the drones to Moscow, despite the evidence.

Ukrainians who have witnessed attacks by the drones say they make a recognisable noise, and have described them as sounding like ‘motorbikes’ in the air, while some soldiers have taken to calling it ‘the flying lawnmower’.

While the drones can be devastating to their targets, soldiers have said they a vulnerable to small arms fire, with pictures from Kyiv showing that even police officers have been shooting them out of the sky.

‘This is a primitive handmade product,’ Yuriy Ignat, a spokesman for the Ukrainian Air Force, told Radio Free Europe (RFE) in October. 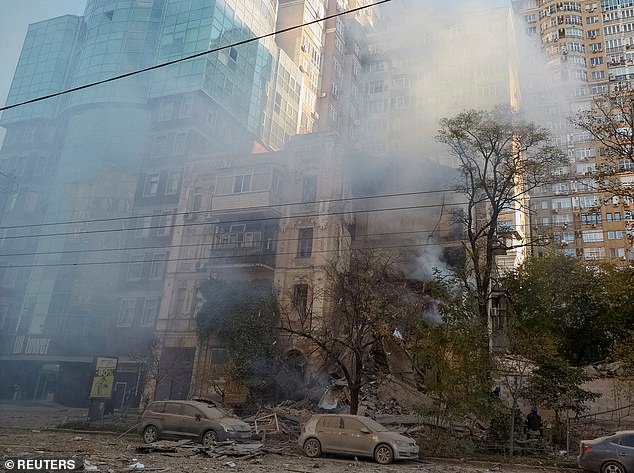 Pictured: A residential building destroyed by a Russia drone strike is seen on October 17 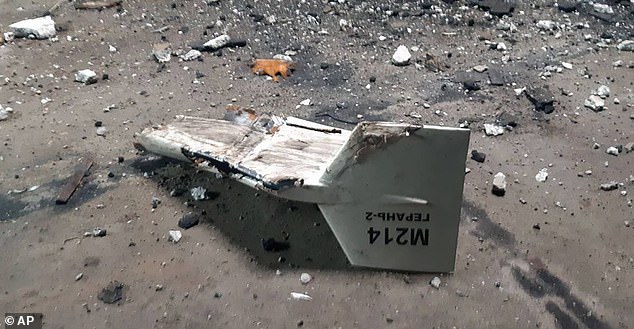 Pictured: The wreckage of what Kyiv said was an Iranian Shahed drone, downed  near Kupiansk, Ukraine

Tehran has denied selling the drones to Russia, but there is mounting evidence that Moscow is deploying the weapon.

Here are some facts and figures about the deadly drone: 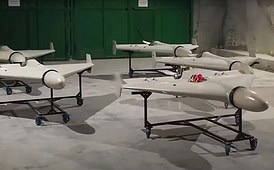 ‘It’s not a high-tech conveyor-belt production like the [Turkish-made] Bayraktar or American and Israeli [unmanned aerial vehicles],’ he added.

Ukrainian residents described the drone attacks to RFE. ‘You can hear the roar. First, I just hear them, but then I saw one fly by and then explode,’ one man said.

Another said: ‘There was a buzz that woke me up. I remember thinking: ‘What’s that?’ The sound was approaching and then there was an explosion near the house.’

According to reports, the first recorded use of the drones was in Yemen in Houthi-controlled areas.

Ukrainian military officials say the drones are cheaper and less sophisticated than cruise missiles – but can have a similarly devastating affect on their target.

The almost 12-foot long Shahed 136 is designed with a delta-wing shape, with stabilising rudders at the top of the aircraft. The fuselage is at the centre of the drone and blended into the almost 4ft wings, giving it an elegant-looking shape.

The explosives are contained in the nose of the drone, as well as the technology that guides it to its targets for a precision strike. The engine, meanwhile, is found at the rear of the drone, and drives two bladed propellers.

It has been compared to an engine one would find on a lawnmower or a moped.

Overall, the drone weighs 440lbs, and can fly at speeds of almost 120mph.

In order to overwhelm air defences, several of the drones (batches of five and above) are launched at once from the same rack. They are fired almost horizontally with rocket-launch assistance.

The rocket is jettisoned on take-off, with the engine taking over once it is airborne. 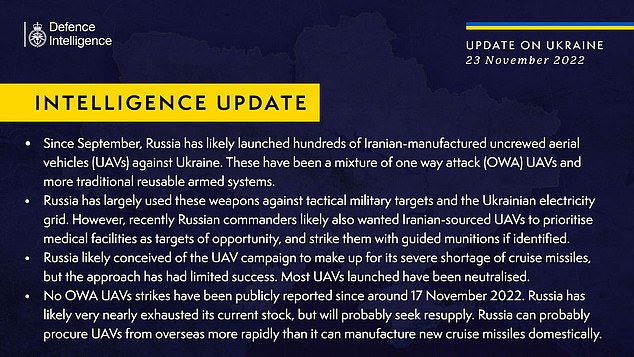 Pictured: The MoD’s November 23 intelligence update, which said Russia is running low on its supply of Iranian-built drones

The MoD’s update came after the U.S. military on Tuesday said debris analysis has concluded that the same type of Iranian drone was used to attack a commercial tanker off the coast of Oman a week ago.

The U.S. Navy’s Bahrain-based 5th Fleet published photos and details of its investigation into the attack on the Liberian-flagged Pacific Zircon tanker, including debris from the Shahed-136 drone itself.

In a statement, the Navy said the drone ripped a 30-inch-wide hole into the back of the ship, and the explosive impact damaged a shipboard boiler, potable water tank and life raft.

‘The Iranian attack on a commercial tanker transiting international waters was deliberate, flagrant and dangerous, endangering the lives of the ship’s crew and destabilizing maritime security in the Middle East,’ Vice Adm.

Brad Cooper, the top U.S. Navy commander in the Middle East, said in a statement.

Gulf waters have in recent years seen attacks on tankers that have come at times of heightened regional tensions with Iran.

In July 2021, a suspected drone attack hit a petroleum product tanker managed by an Israeli firm off Oman’s coast. Iran denied accusations it was responsible.