The Russian brigade accused of carrying out heinous war crimes against helpless civilians in Bucha has reportedly been attacked by Ukrainian drones and suffered ‘heavy losses’ in the Donbas, amid claims Vladimir Putin wants them to ‘disappear’.

Soldiers of the 64th Motorised Rifle Brigade of the 35th All-Russian Army, who Ukrainian authorities named as those responsible for torturing, raping and executing civilians on the outskirts of Kyiv, withdrew last month to Belarus and then Russia.

Vladimir Putin bestowed an honorary title on the brigade now known as the ‘Butchers of Bucha’, with a presidential decree honouring their ‘mass heroism’ in defending ‘state interests’, while the officer overseeing them was promoted.

The Russian brigade accused of carrying out heinous war crimes against helpless civilians in Bucha has reportedly been attacked by Ukrainian drones, pictures appear to show 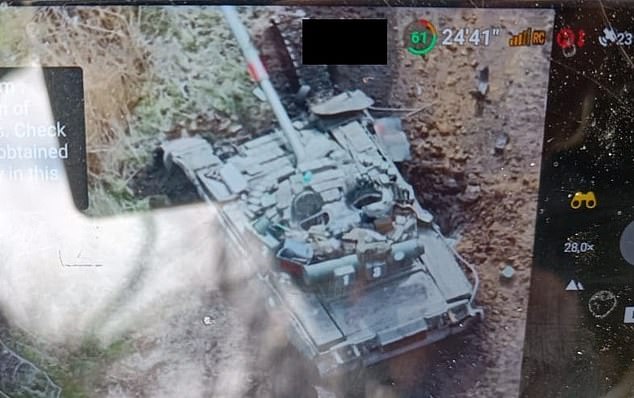 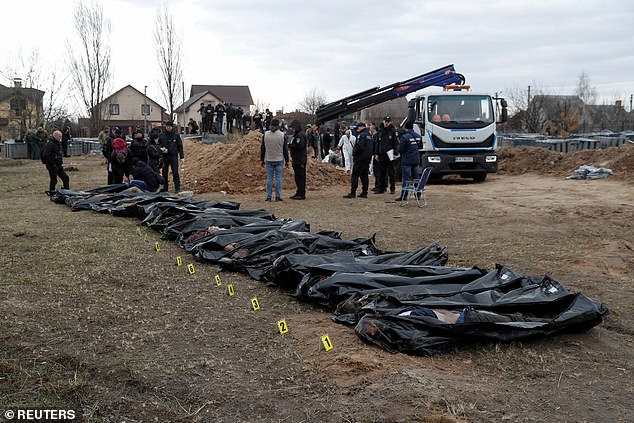 A line of corpses is seen in Bucha after the Kyiv town was recaptured by Ukrainian forces, revealing the scale of Russian atrocities

Despite the honours, the unit was then redeployed to the Donbas front – one of the most dangerous fronts in the conflict – where deadly battles are taking place as Moscow’s forces attempt to surround Ukrainian troops who are proving a determined line of defence against Russia’s push from the east.

Analysts say that Putin has deliberately sent them to the front lines in order to make them disappear so they could not never be forced to testify over their alleged war crimes.

Ukraine had published the names of the officers responsible for the Bucha massacre, and Putin knew they could one day be made to stand trial and reveal the scale of their atrocities.

An intelligence report in early April said: ‘Another goal of the rapid return of the 64th Brigade to Ukrainian territory is the quick disposal of unnecessary witnesses.

‘That is, redeployment to a part of the war front where they will have no chance of surviving, thus making it impossible for them to testify in future courts.’ 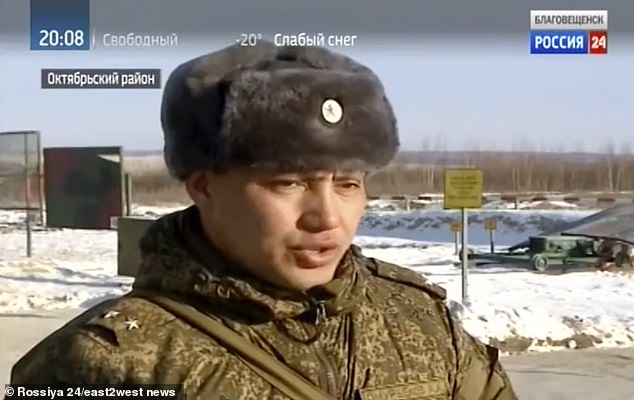 Commander Azatbek Omurbekov (pictured), identified as Putin’s senior commander in Bucha when the barbarism was carried out, was then promoted 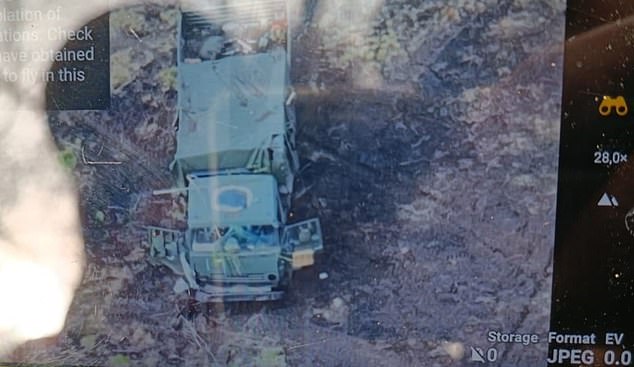 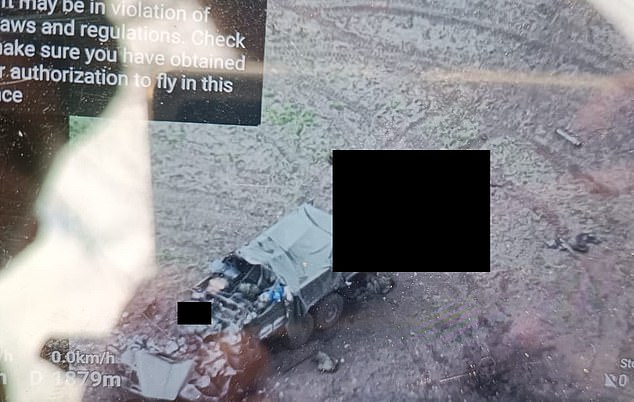 Analysts say that Putin has deliberately sent them to the front lines in order to make them disappear, and drone footage shows corpses on the vehicles (pictured) 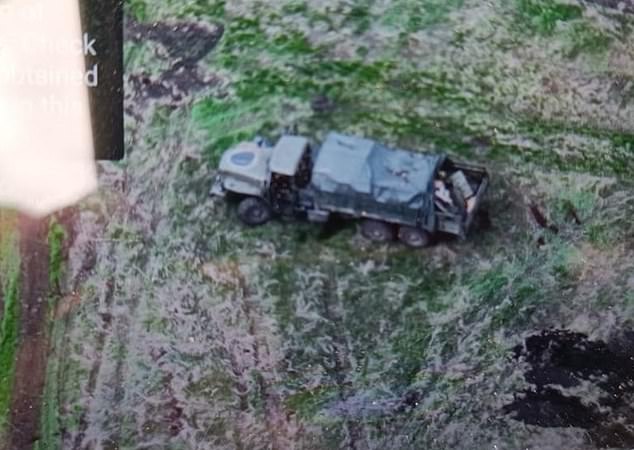 Ukraine had published the names of the officers responsible for the Bucha massacre, and Putin knew they could one day be made to stand trial. Now the unit has suffered heavy losses to personnel and equipment (pictured)

The main intelligence directorate of Ukraine’s MoD said at the start of the month that Russian commanders were refusing to rotate their brigades, and the 64th were in Belgorod in Western Russia ready for redeployment.

Putin then sent them to the front between Kharkiv and Izyum where fierce Ukrainian fighters were stationed looking to exact revenge on the now infamous brigade.

Most of the soldiers in the unit protested against their redeployment so soon after their campaign in Kyiv, according to Ukrainian news site Hromadske.

They were made to fight the 93rd Ukrainian brigade protecting Kharkiv who have a fearsome reputation, similar to the neo-Nazi Azov regiment in Mariupol.

Ukraine believes defeating the 64th brigade would be another huge symbolic victory following the successful strikes inside Russia and the sinking of the Moskva flagship. 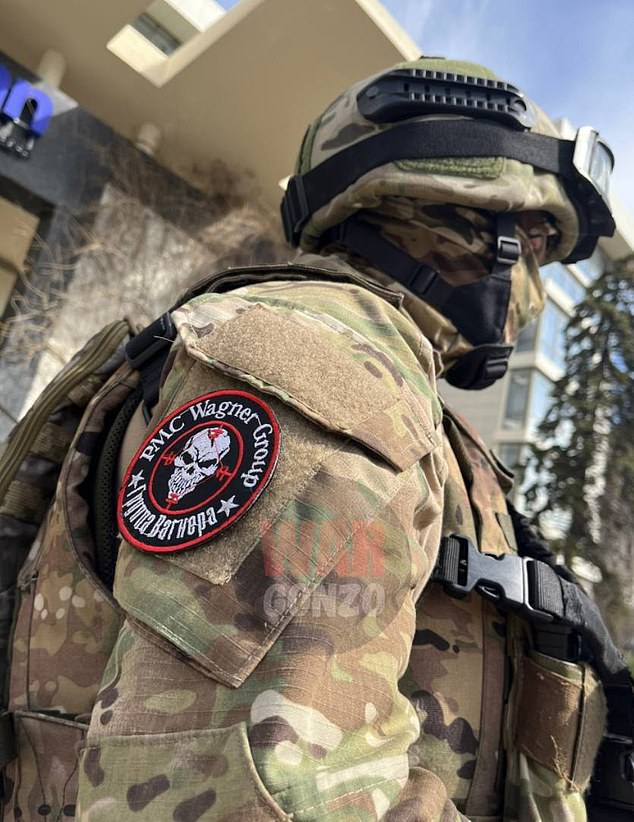 It is believed the brigade was assisted by the feared Wagner mercenaries in their savage attacks on Bucha residents. Pictured: a Wagner Group mercenary in Ukraine this month

The ‘butchers of Bucha’ had left a trail of death and destruction in their wake, as Ukrainian authorities discovered several mass graves and scores of corpses once they recaptured the town north of Kyiv.

It is believed the brigade was assisted by the feared Wagner mercenaries in their savage attacks on Bucha residents.

The shadowy military company which has been linked to a string of killings, rapes and war crimes around the world is known as Putin‘s private army which carries out his dirty work at an arm’s length from the state.

Russia has said that images and footage of hundreds of dead bodies strewn across Bucha were fake.

Commander Azatbek Omurbekov, identified as Putin’s senior commander in Bucha when the barbarism was carried out, was then promoted from Lieutenant Colonel to full Colonel.

His elevation was acknowledged in a report from newspaper Red Star. 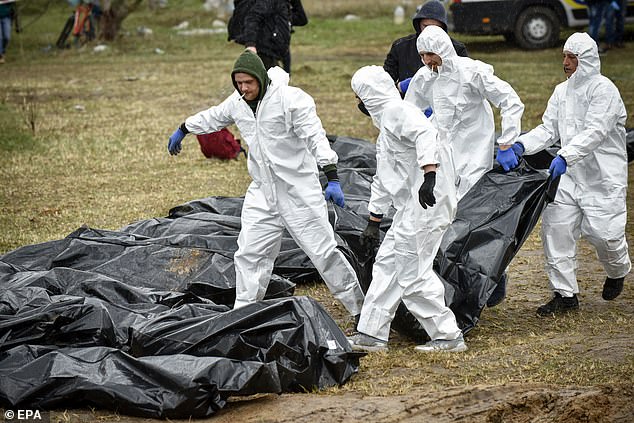 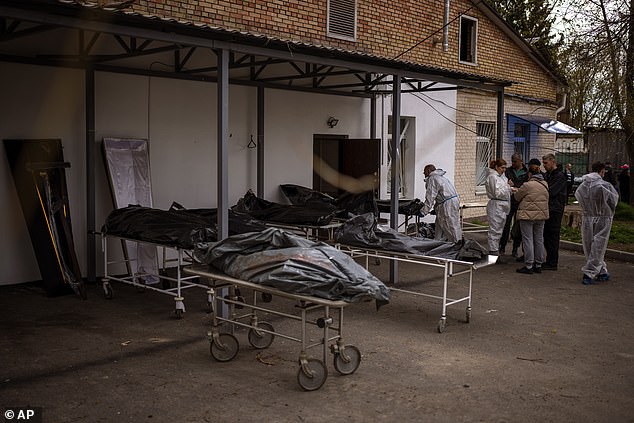 Dead bodies wait to be identified outside a morgue in Bucha, where Russia is accused of committing war crimes 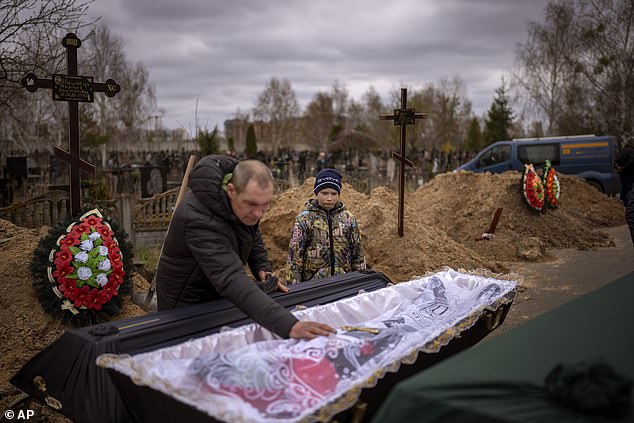 Vova, 10, looks at the body of his mother, Maryna, lying in a coffin as his father, Ivan Drahun, prays during her funeral in Bucha last week

The reason for this promotion to full colonel was not clear but the report hailed his perceived success in Ukraine.

‘The separate motorised rifle brigade under the command of Colonel Azatbek Omurbekov carried out the task of occupying a defensive line,’ said the newspaper.

‘In the course of capturing the designated boundary, the enemy numbering up to a battalion was defeated, and more than 40 pieces of equipment destroyed.

‘The Nationalist unit lost all combat capability and was no longer involved in combat operations.

‘Within three weeks, under the leadership of Colonel Omurbekov, brigade units at the occupied line repelled more than 50 attacks by the enemy using tanks, infantry fighting vehicles and heavy artillery.’

Ukrainian officials say the bodies of more than 1,000 civilians have been retrieved from areas around Kyiv, and they are working with French investigators to document alleged war crimes.

Forensic tests carried out on civilian corpses dumped in mass graves show women were raped before being brutally killed, it was revealed on Monday. 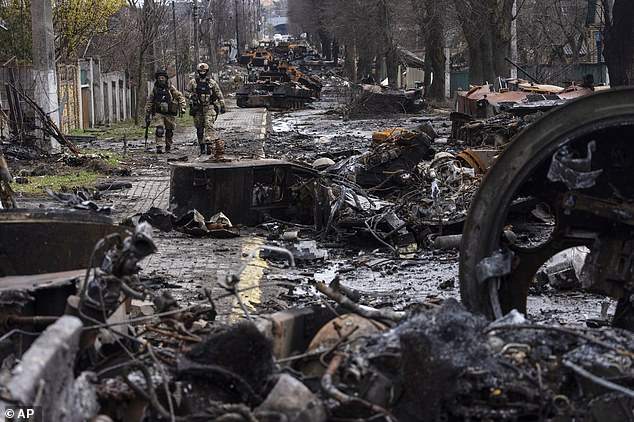 APRIL 3: Soldiers walk amid destroyed Russian tanks and cars in Bucha, on the outskirts of Kyiv

Dozens of autopsies have been carried out on mutilated corpses from Bucha, Irpin and Borodianka, with many showing signs of torture and multiple bullet holes in the back.

Some have been so badly disfigured or even decapitated that investigators have been unable to identify them.

Vladyslav Pirovskyi, a Ukrainian forensic doctor who carried out the autopsies, told The Guardian: ‘We already have a few cases which suggest that these women had been raped before being shot to death.

‘We can’t give more details as my colleagues are still collecting the data and we still have hundreds of bodies to examine.’

His team has been analysing 15 bodies a day, with most killed by automatic gunfire.

He added: ‘There are many burnt bodies, and heavily disfigured bodies that are just impossible to identify.

‘The face could be smashed into pieces, you can’t put it back together, sometimes there’s no head at all.’

The evidence has been passed on to the region’s senior prosecutor, Oleh Tkalenko, for further investigations.

One coroner north of Kyiv said it is difficult to find signs of rape and sexual abuse because the bodies ‘are in such bad shape’.

A United Nations mission to Bucha documented ‘the unlawful killing, including by summary execution, of some 50 civilians there’, the UN’s Office of the High Commissioner for Human Rights said.

In the same town, 25 women aged 14 to 25 were kept in a basement and systematically raped, with nine of the women becoming pregnant in a case now recorded by human rights commissioner Lyudmila Denisova.