The wreckage of an obliterated Russian convoy lying along a Ukrainian highway west of Kyiv has been captured on video by a drone, after Vladimir Putin‘s forces fully retreated from the region.

President Volodymyr Zelensky‘s forces ambushed the tanks as they travelled down the highway – a tactic Kyiv has employed to great success across the country to repel Vladimir Putin’s vast numbers of slow-moving military hardware.

Two aerial videos show several rusting wreckages of the tanks and other military vehicles on the E40 highway, a main road that runs into Kyiv from the west.

In the first video, around ten blackened wreckages can be seen in a closely-packed column down the middle of a three-lane highway. Another is shown off to the side.

Pictured: Drone footage shows around ten blackened wreckages in a closely-packed row down the middle of a three-lane highway. Another is shown off to the side. It appears they have been attacked by Ukrainian artillery fire some time ago 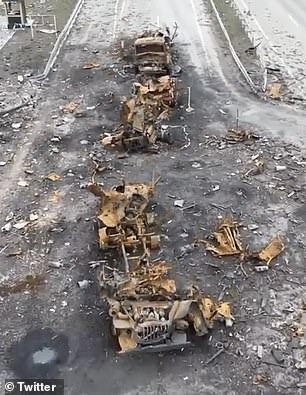 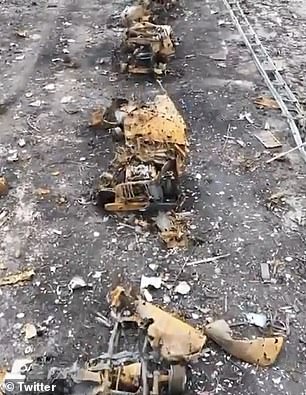 Pictured: Rusting wreckages amidst debris on a scorched road are shown in drone footage from Ukraine, on a highway west of the capital Kyiv

The position of the wreckages suggests they were destroyed in an ambush and well-targeted artillery strike – a tactic that has proven effective for Kyiv’s forces against Russia’s superior numbers.

The vehicles have rusted, suggesting they were destroyed some time ago. Debris is scattered all around them on the scorched stretch of road.

Towards the end of the footage, two civilian cars are seen approaching the wrecks, are are forced to skirt around the devastated vehicles.

Shrapnel marks can be seen on a nearby building, while other civilian vehicles parked on a nearby side road have also been destroyed, possibly caught in the blasts from the artillery fire.

In the second drone video, more rusting vehicles are shown on the side of the highway and are spaced further apart than in the first. One is shown abandoned, left parked sideways across a slip road, blocking part of the road.

From their position, the vehicles appears to have been ditched by Russian forces coming under fire. They all also show signs of having come under aerial attack.

It is unclear if there were any surviving Russian soldiers in the attacks. Other videos of artillery strikes on Russian armoured columns have shown crews jumping out of their vehicles and making a break for it, and in some cases escaping. Others have shown soldiers being killed in the strikes, unable to escape the vehicles in time. 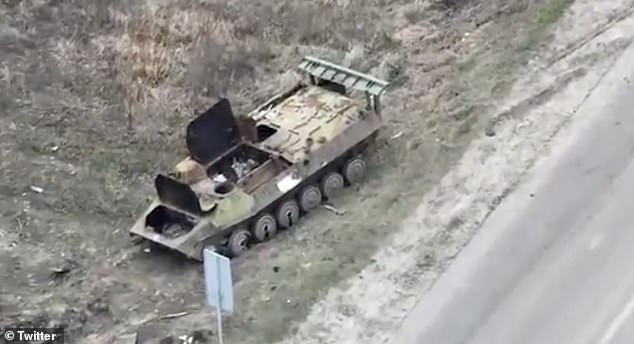 Pictured: An armoured Russian military vehicle is shown in drone footage abandoned on the side of the E40 highway in Ukraine. It appears it has been hastily ditched by its crew as it came under attack from artillery fire 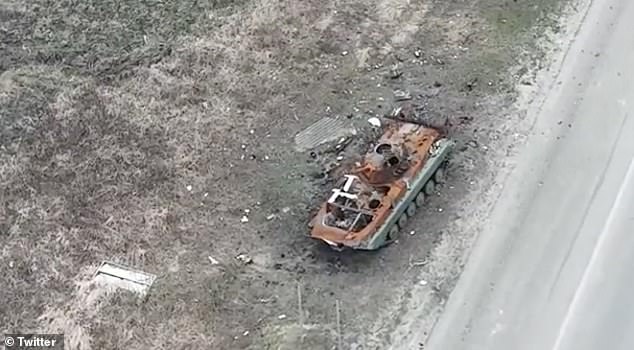 Pictured: Another rusting armoured vehicle is shown on the side of the E40 highway, a main motorway that runs into Kyiv from the west 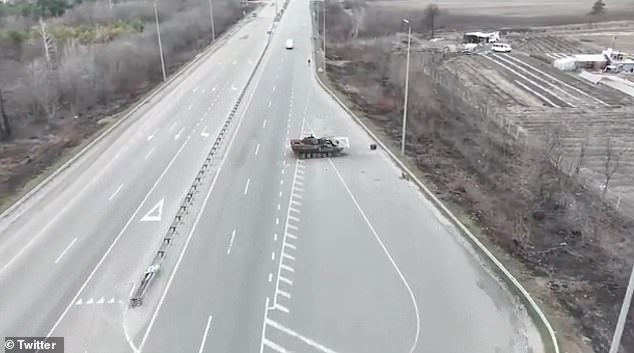 A Russian tank shown parked sideways across a slip road, blocking part of the road. It also appears to have been quickly abandoned by its crew as it came under attack

The same E40 highway was the scene of horrific discoveries last week, when BBC investigators found 13 civilian bodies along one short stretch of the road.

Two of the bodies were of a couple who were killed in early March trying to escape the capital when they came under fire from a Russian tank crew. The man – a husband and father – was shown in other drone footage stopping his car and getting out with his hands up in a sign of surrender. The crew gunned him down anyway.

The horrific scenes from the region began to emerge as Russian forces began to pull back, allowing Ukraine’s forces and journalists back into the area for the first time in more than a month.

Experts, meanwhile, have said that Moscow’s armies have left themselves open to attack by using slow-moving Soviet-era logistical tactics to move vast numbers of vehicles into and around Ukraine.

As demonstrated by the latest drone footage, this has made tanks, armoured personnel carriers, trucks and other Russian hardware vulnerable to Kyiv’s more mobile units that have been able to destroy thousands of the Kremlin’s vehicles.

Military blog Oryx has been tracking Russia’s hardware losses, tallying visual confirmations from pictures and videos coming out of Ukraine. 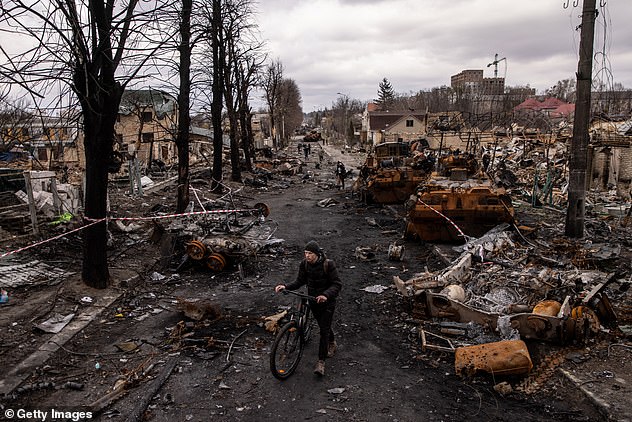 A man pushes his bike through debris and destroyed Russian military vehicles on a street on April 6, 2022 in Bucha, Ukraine 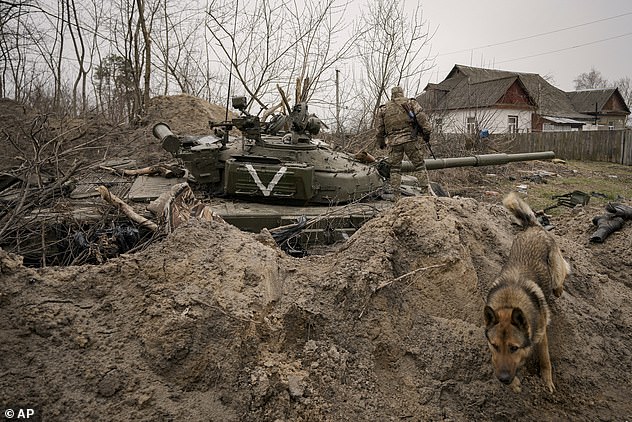 A Ukrainian serviceman walks on an abandoned Russian army tank in Andriivka, April 5 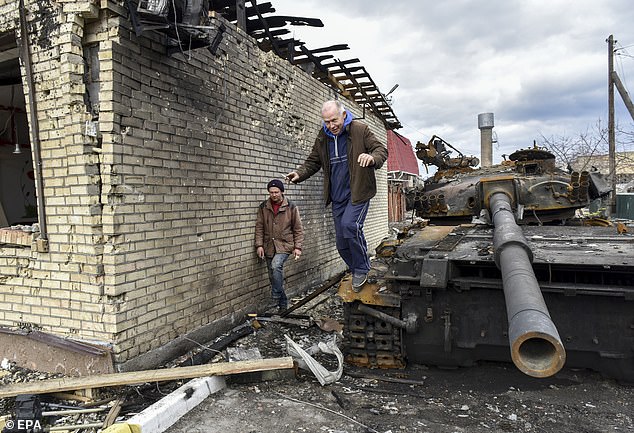 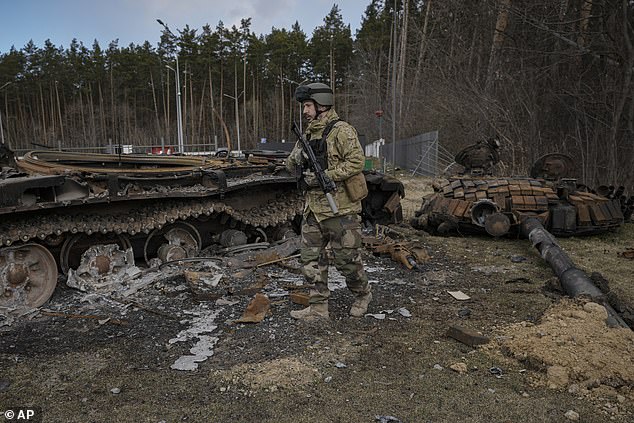 A Ukrainian serviceman walks next to the wreck of a Russian tank in Stoyanka, March 27

Of those, 1,322 have been visually confirmed as destroyed, 38 have been damaged, 238 have been abandoned and 974 have been captured, by the blog’s count.

Given that Oryx’s figures are based on visual confirmations, this is seen as a minimum count. The true figure is believed to be higher, with Kyiv’s defence ministry claiming more than 4,000 vehicles have been destroyed.

The ministry has also claimed that 18,900 Russian troops have been killed since the invasion began on February 24, with some estimates putting this figure over 20,000.

Meanwhile, a US defence official said on Wednesday that Russia had pulled all of its estimated 24,000 or more troops from the Kyiv and Chernihiv areas in the north, sending them into Belarus or Russia to resupply and reorganise.

They are expected to return to fight in the east of the country, where Russia has said it intends to focus its military efforts in a new phase of the invasion.

Growing numbers of Vladimir Putin’s troops, along with mercenaries, have been reported moving into the Donbas.

‘Later, people will come under fire,’ Ukrainian Deputy Prime Minister Iryna Vereshchuk said in urging civilians to evacuate from the mostly Russian-speaking industrial region, ‘and we won’t be able to do anything to help them’.

Ukrainian forces have been fighting Russia-backed separatists in the Donbas since 2014. Ahead of its February 24 invasion, Moscow recognised the Luhansk and Donetsk regions as independent states.

Another Western official said it may take Russia’s battle-damaged forces as much as a month to regroup for a major push on eastern Ukraine.

In his nightly address on Wednesday, Ukrainian President Volodymyr Zelensky also warned Russia’s military is gearing up for a new offensive in the east.

Ukraine too was preparing for battle, he said. 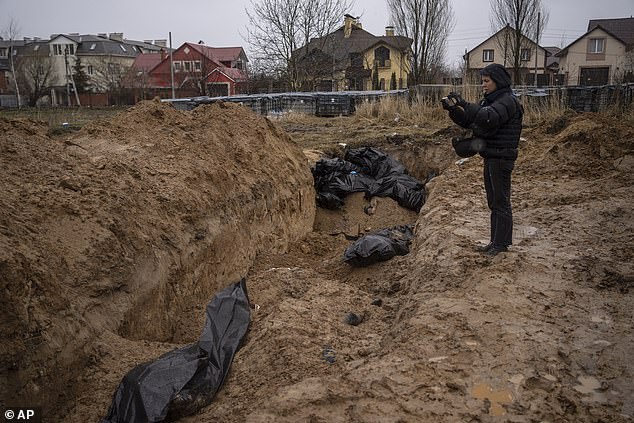 At a cemetery in the town of Bucha, workers began to load more than 60 bodies apparently collected over the past few days 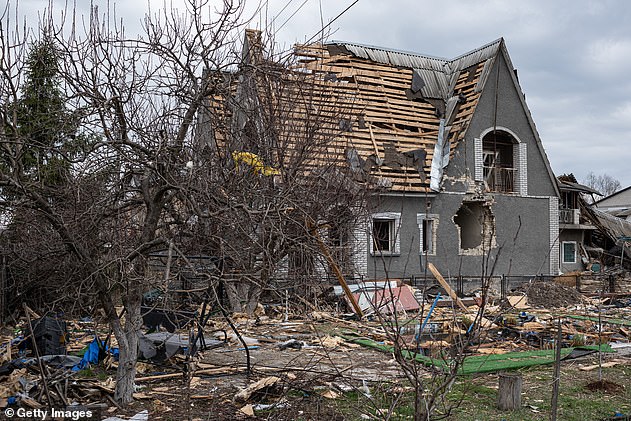 Hostomel was occupied for more than a month by Russian forces as they pushed toward the Ukrainian capital, before ultimately retreating to Belarus last week 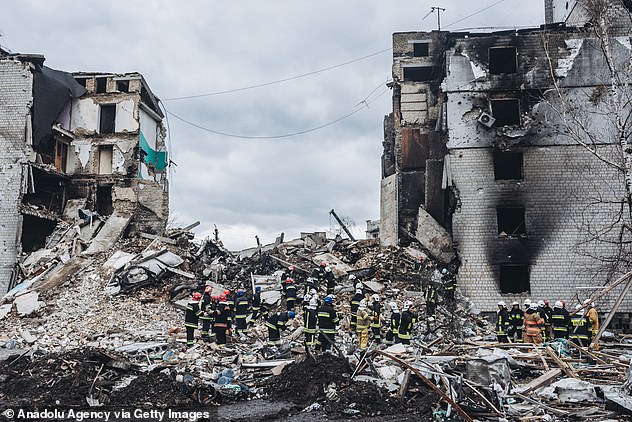 ‘We will fight and we will not retreat,’ he said. ‘We will seek all possible options to defend ourselves until Russia begins to seriously seek peace. This is our land. This is our future. And we won’t give them up.’

In areas north of the capital, Ukrainian officials were gathering evidence of Russian atrocities amid signs Moscow’s troops killed people indiscriminately before retreating.

Ukrainian authorities said the bodies of least 410 civilians were found in towns around Kyiv, victims of what Mr Zelenskyy said was a Russian campaign of murder, rape, dismemberment and torture.

Some victims had apparently been shot at close range and Some were found with their hands bound.

Mr Zelensky accused Russia of interfering with an international investigation into possible war crimes by removing bodies and trying to hide other evidence in Bucha, north west of Kyiv.

‘We have information that the Russian troops have changed tactics and are trying to remove the dead people, the dead Ukrainians, from the streets and cellars of territory they occupied,’ he said during his latest video address. ‘This is only an attempt to hide the evidence and nothing more.’

Switching from Ukrainian to Russian, Mr Zelensky urged ordinary Russians ‘to somehow confront the Russian repressive machine’ instead of being ‘equated with the Nazis for the rest of your life’.

He called on Russians to demand an end to the war ‘if you have even a little shame about what the Russian military is doing in Ukraine’.

24,000 Russian troops retreat across the border after failed bid to take Kyiv before new offensive