By Rory Tingle, Home Affairs Correspondent For Mailonline and Paul Revoir For The Daily Mail

Shamima Begum has admitted she never once considered turning back as she travelled 700 miles through Turkey to join ISIS.

The former London schoolgirl, who was 15 when she made the journey in 2015, tells a new BBC podcast she could have safely returned to the UK but chose not to.

Questioned by journalist Joshua Baker whether she ever considered going back on her plan to join the death cult, she says: ‘No, not along the journey.’

Asked if it would have been possible not to cross into Syria, she answers: ‘I think so yeah. But I think I would have been pressured to continue by my friends and by the smuggler. And at that point I was so afraid of being arrested and going to prison.’

Begum also describes the process of crossing the Syrian border as ‘easy’. 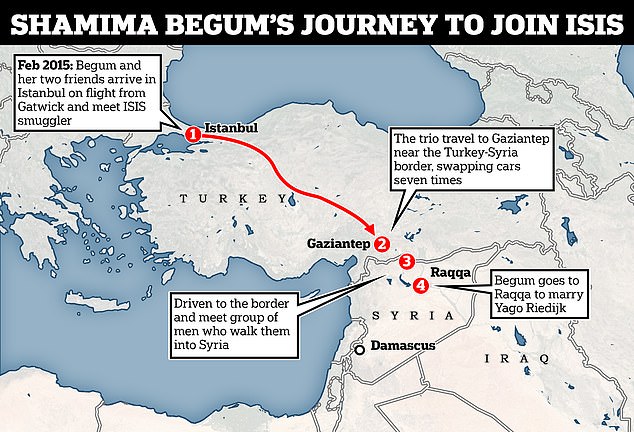 In episode two of I’m Not a Monster: The Shamima Begum Story, Baker retraces Begum’s story across Turkey to Syria.

The presenter and local journalist Zeynep Bilginsoy begin at a bus station in Istanbul where the Londoner and her two friends met a smuggler, said to be Mohammed Al Rasheed.

Describing her onward journey, she says: ‘We were in the coach for half a day, then got off and got into a bunch of cars and switched cars seven times before reaching the border.

‘At some points we got separated as well and were wondering what was going on. A lot of adrenaline was going through us.’

Recalling the moment they reached the border, she says: ‘There were Syrian men waiting for us who helped carry our bags and the smuggler told us to go with them across the border. It was very easy.’

Baker and Bilginsoy track down a taxi she travelled in through Turkey but the driver refuses to talk to them.

They then try to speak to people smugglers, and in one terrifying exchange, a gangster asks the pair for money, and when they ignore his request threatens to make them ‘disappear’. 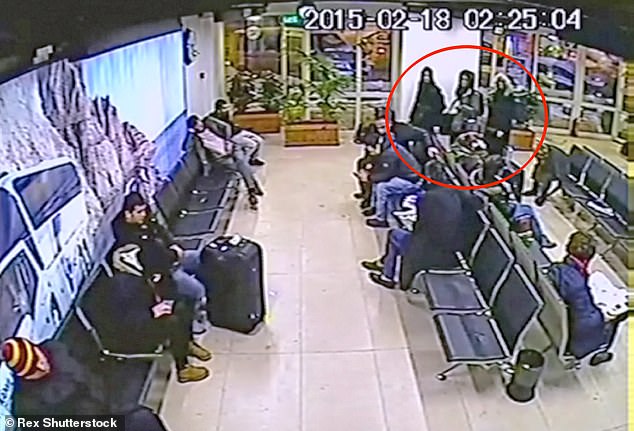 In episode two of I’m Not a Monster: The Shamima Begum Story, presenter Joshua Baker retraces Begum’s story across Turkey to Syria. Pictured: Begum with her friends, Amira Abase and Kadiza Sultana at Istanbul bus station

Later, Baker is handed a secret memo on Mohammed Al Rasheed – the ISIS people smuggler and Canadian spy who is accused of smuggling Begum and her two friends into Syria – with the warning to ‘be careful’ because it could ’embarrass powerful people’.

Should the UK take Begum back?

The BBC has come under fire for giving Begum a 10-part podcast, which sees her claim that she is different from how people perceive her.

It is understood that no money has been paid to her by the BBC for her participation in the series.

But critics claim the corporation should not be giving her the ‘oxygen’ of publicity amid concerns it will allow her to ‘spin’ a ‘sob story’ and use it as a PR opportunity.

Campaign group the TaxPayers’ Alliance said in a social media post that the BBC licence fee money ‘should not be supporting this disgraceful PR exercise to spin the sob story of an Isis bride’. 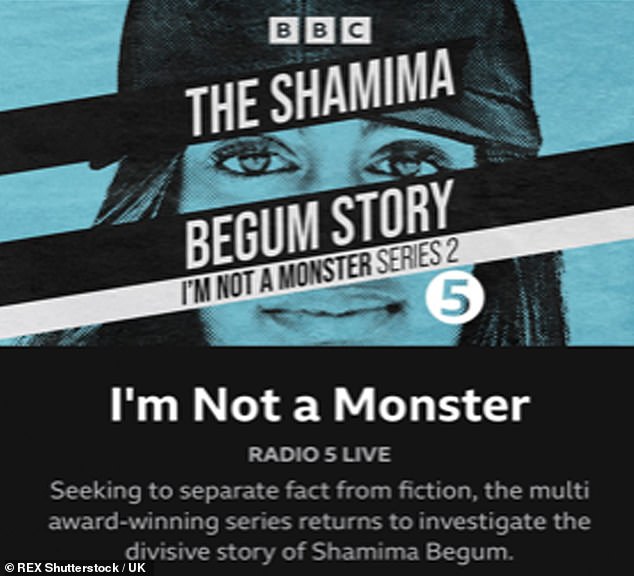 The BBC has insisted the series is ‘not a platform for Shamima Begum to give her unchallenged story’ but a ‘robust, public interest investigation’

The BBC has said the series is ‘not a platform for Shamima Begum to give her unchallenged story’ but a ‘robust, public interest investigation’.

She also talks about when she left to go to Syria to join the terror group, saying she had packed mint chocolate because you could not find it in that country.

In another section, Begum says that when people thought of Isis they ‘think of me because I’ve been put on the media so much.’ The two other girls that joined her – who also attended Bethnal Green Academy – were Amira Abase and Kadiza Sultana.

The podcast explores how Begum got to Syria and what she did when she arrived.

– I’m Not a Monster: The Shamima Begum Story is available now on BBC Sounds