A skeleton of an Irish giant will be withdrawn from a London museum due to ‘sensitivities’ – but it still won’t be laid to rest.

Charles Byrne, an Irishman who measured 7 feet 7 inches tall due to a gene mutation, became a celebrity in 18th century London due to his immense size.

Byrne died in 1783 at the age of 22 and for more than 200 years his skeleton was displayed at the Hunterian Museum at Lincoln’s Inn Fields, central London.

The museum closed in May 2017 for renovation work and is finally set to reopen in March 2023 – without the skeleton on display.

The skeleton, left, of Charles Byrne, nicknamed the ‘Irish Giant’ who stood about 7 feet, 7 inches (2.3 meters) tall, and died in 1783 aged 22, is displayed in London’s Hunterian Museum prior to its redevelopment. The skeleton is being removed from the museum in time for its reopening in March 2023, but Byrne’s desire to be laid to rest at sea is still not being fulfilled

Who was the Irish Giant?

The Irish Giant is the named given to Charles Byrne (1761-1783), a man who had a condition called acromegalic gigantism.

Byrne had an undiagnosed adenoma, a benign tumour in his pituitary gland, which caused acromegaly (overgrowth of the bones) and gigantism.

Due to his condition he measured 7 feet 7 inches tall became a London celebrity.

But his health declined and after he died at the age of just 22 his body was stolen when it was on the way to being buried at sea.

For more than 200 years his skeleton was displayed at the Hunterian Museum in central London.

Byrne had an undiagnosed adenoma – a benign tumour – in his pituitary gland, which caused acromegaly (overgrowth of the bones) and gigantism.

According to a statement from the Royal College of Surgeons, which runs the museum, Byrne’s skeleton will not be displayed any more due to ‘sensitivities’, but it will still be available for ‘bona fide medical research’.

However, it means Byrne’s dying wish of being buried at sea will still not be fulfilled, despite repeated calls to do so.

The Hunterian Museum is named after Scottish surgeon and anatomist John Hunter, who arranged for the giant’s body to be snatched when it was on the way to its sea burial.

‘During the period of closure of the Museum, the Board of Trustees of the Hunterian Collection discussed the sensitivities and the differing views surrounding the display and retention of Charles Byrne’s skeleton,’ the college said.

‘The Trustees agreed that Charles Byrne’s skeleton will not be displayed in the redeveloped Hunterian Museum but will still be available for bona fide medical research into the condition of pituitary acromegaly and gigantism.’

Instead of being displayed, Byrne’s skeleton will from now on be kept in store at the Royal College of Surgeons grounds at Lincoln’s Inn Fields, as per Department for Culture, Media & Sport (DCMS) guidelines.

However, some experts are concerned that students will still be able to see the bones during private viewings, which would still go against Byrne’s wishes.

Born in County Derry in 1761, Charles Byrne set off for Britain in pursuit of his fortune in his late teens.

Skeletal evidence shows he grew to be 7 feet 7 inches (2.31 metres) tall, although some sources put his height at anywhere up to 8 feet 4 inches. 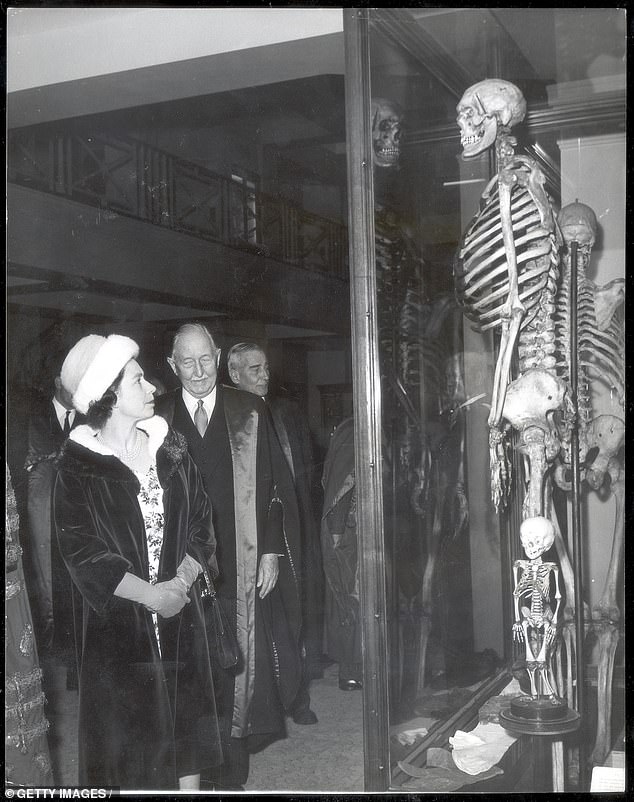 Our late Queen, Elizabeth II, visits the skeleton of the Irish Giant at the Hunterian Museum in central London in November 1962 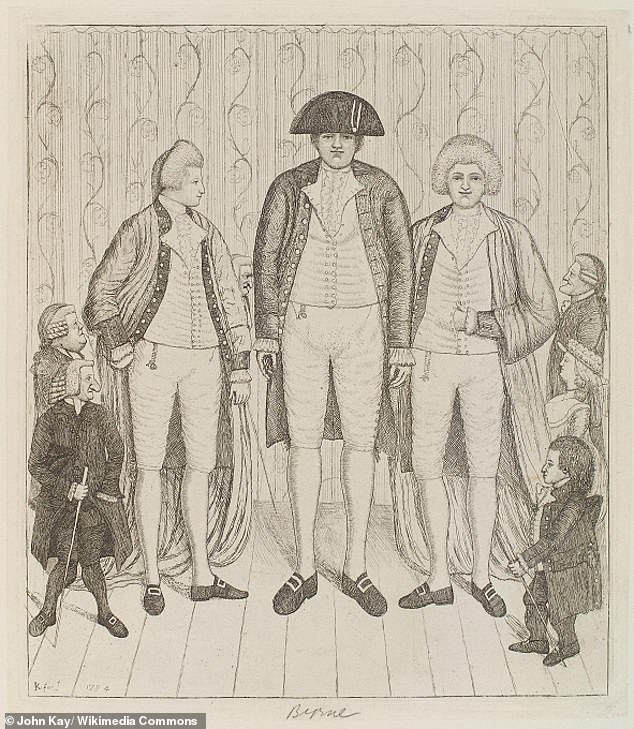 Charles Byrne is depicted here (centre) in a John Kay etching (1784), alongside the ‘giant’ Brothers Knipe and dwarfs

Gigantism is abnormal growth due to an excess of growth hormone (GH) during childhood.

Gigantism is very rare. The most common cause of too much GH release is a noncancerous (benign) tumor of the pituitary gland, although there are other causes.

Gigantism is treatable, but early diagnosis is crucial to prevent excessive height and other complications.

In the last years of his life, he made a living exhibiting himself as the Irish Giant, entertaining paying audiences.

However, his health declined and he descended into alcoholism before a tragic early death at the age of just 22.

Byrne went to great lengths while he was alive to ensure his skeleton was not put on display after his death – a fate then usually reserved for executed criminals.

He made arrangements with friends that when he died his body would be sealed in a lead coffin and taken to the English coastal town of Margate and then to a ship for burial at sea.

However, Byrne’s wishes were thwarted when John Hunter arranged for the body to be snatched on its way to Margate, allegedly after bribing Byrne’s friends.

Byrne’s skeleton appeared in Hunter’s private collection four years later and stayed on public display for the next couple of centuries at the Hunterian.

More recently, the museum has faced calls to lay the skeleton to rest, and after it temporarily closed for refurbishment in 2017 the Royal College of Surgeons said it would be ‘discussing the matter during the period of closure’.

However, the college’s decision, announced on Wednesday morning, may lead to fresh calls to give him a respectful burial.

Royal College of Surgeons said the skeleton will not be laid to rest partly because ‘no written evidence exists’ of Byrne’s wishes.

The college also said Hunter and other surgeons of the time acquired specimens ‘in ways we would not consider ethical today’. 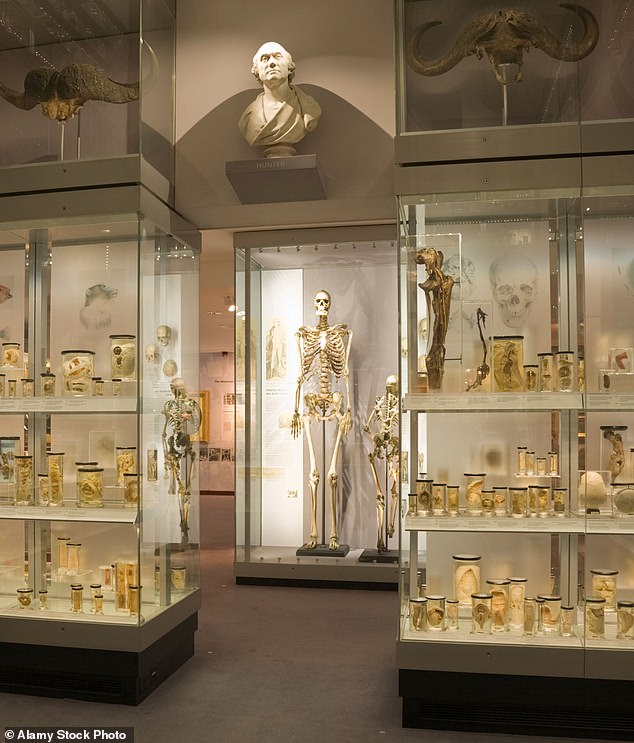 The skeleton used to be pride of place at the Hunterian, which is named after Scottish surgeon and anatomist John Hunter, who arranged for the Giant’s body to be snatched when it was on the way to its sea burial

The late Dame Hilary Mantel, who wrote a fictionalised account of Byrne called ‘The Giant, O’Brien’, told the Guardian in 2020 that ‘it’s time Charles went home’ and that his remains were taken back to Ireland.

Back in 2011, researchers determined the cause of Byrne’s gigantism by extracting DNA from the skeleton’s teeth.

Byrne had a rare mutation in a gene called the AIP gene, which is involved in pituitary tumours.

Byrne had an undiagnosed adenoma, a benign tumour, in his pituitary gland, which caused acromegaly (overgrowth of the bones) and gigantism.

The gene is still causing excessive growth in families in the same area of Northern Ireland where Charles Byrne was born.

‘I think that science has learned all it can from the bones, and the honourable thing now is lay him to rest,’ said Mantel, who died in September last year.

‘It would suit the spirit of the times, and I don’t see a reason for delay. He’s waited long enough.

‘I hope there would be a welcome party for him [in Ireland], and I hope I can come and join it.’

In 2011, Len Doyal, emeritus professor of medical ethics at Queen Mary University in London, and Thomas Muinzer, a lawyer at University of Aberdeen, wrote an article in the BMJ advocating grant Byrne’s wish and giving him a peaceful burial at sea.

Today, in a joint statement to MailOnline, they said: ‘We are delighted to hear the news that the battle that we and others have fought to have Charles Byrne’s skeleton removed from the Hunterian has finally be won.

‘There was never a coherent argument for the museum to do otherwise, given Byrne’s explicit decision for his body not to fall into the hands of John Hunter for fear of what then precisely happened.

‘Our suspicion is that the museum still wants medical students simply to see the skeleton in private, which again would go against Byrne’s documented wishes.

‘Byrne’s wishes should at last be honoured and his skeleton should be buried at sea, we think with great fanfare.’ 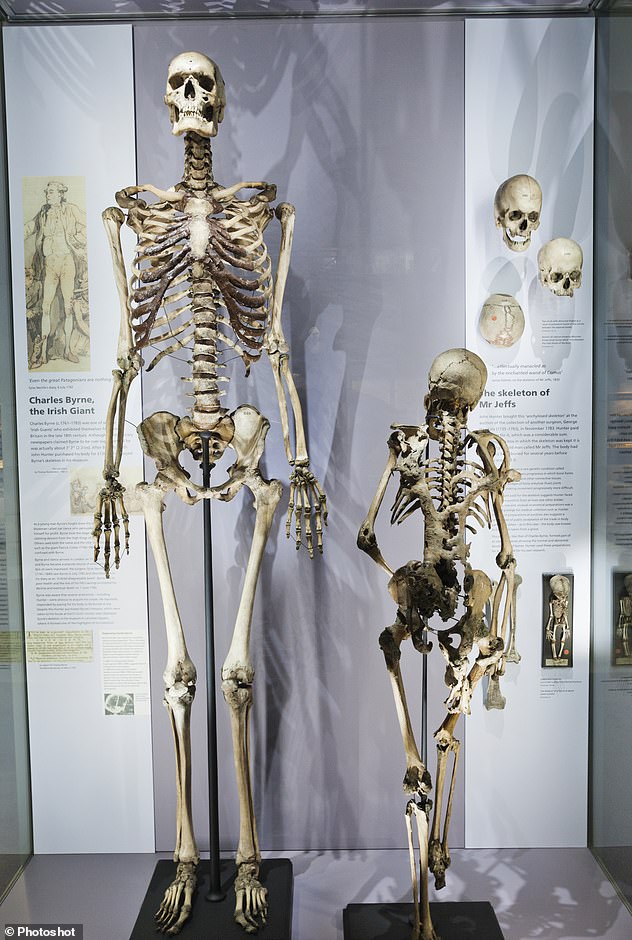 Back in 2011, researchers determined the cause of Byrne’s gigantism by extracting DNA from the skeleton’s teeth.

Byrne had a rare mutation in a gene called the AIP gene, which is involved in pituitary tumours.

The gene is still causing excessive growth in families in the same area of Northern Ireland where Charles Byrne was born.

Fountain in Turkey’s ancient ‘City of Gladiators’ is finally restored

‘Fulfill the Irish giant’s deathbed wish’: Museum told to stop displaying skeleton of Charles Byrne who begged to be buried at sea

It was his dying wish to be buried at sea so science wouldn’t seize his body and make him a freak in death as well as life.

But the skeleton of Charles Byrne, known as the Irish giant who at 7ft 7in could light his pipe by a gas lamp, was left hanging in a London museum for more than 200 years.

Experts have called for his skeleton to be removed and buried at sea, as Byrne wanted.

Byrne was a celebrity in his own lifetime and when he died in 1783 at the age of just 22 after turning to alcohol to cope with his fame, the renowned surgeon and anatomist John Hunter was keen to acquire his skeleton.

According to a 2011 article in the British Medical Journal, Byrne was terrified of becoming one of Hunter’s specimens and wanted to be buried at sea.

But the surgeon managed to bribe one of the Irishman’s friends and took his body before it could be laid to rest in the English Channel.

Hunter boiled Byrne’s body down to a skeleton and it became a key feature of his anatomy collection.

It was later displayed at the Hunterian Museum at the Royal College of Surgeons in London, where it remained until the museum was closed for refurbishment in May 2017.

In the BMJ article, experts acknowledged the role the skeleton has played in research, including by helping to link acromegaly – an unusual condition where someone produces too much growth hormone – and the pituitary gland.

But Len Doyal, emeritus professor of medical ethics at Queen Mary university in London, and Thomas Muinzer, a lawyer at Queen’s University Belfast, were among those who said it is time to grant Byrne’s wish and give him a peaceful burial at sea.

‘The fact is that Hunter knew of Byrne’s terror of him and ignored his wishes for the disposal of his body. What has been done cannot be undone but it can be morally rectified,’ they wrote in the BMJ.

‘Surely it is time to respect the memory and reputation of Byrne: the narrative of his life, including the circumstances surrounding his death.’

They said Byrne’s DNA has been taken and can be used in further research, while his skeleton can be replaced by a fake for the purposes of public education.

‘As a sign of respect for Byrne’s original desires, his skeleton should be buried at sea as part of a ceremony commemorating his life,’ they said.

However, Hunterian Museum director Sam Alberti rejected the call, saying the value of the remains outweighed his apparent wishes.

‘A vivid example of the value of having access to the skeleton is the current research into familial isolated pituitary adenoma (benign pituitary tumours that run in families),’ Alberti said.

‘This genetically links Byrne to living communities, including individuals who have requested that the skeleton should remain on display in the museum.

‘At the present time, the museum’s trustees consider that the educational and research benefits merit retaining the remains.’