Two Brits who fought for Ukraine could face the death penalty at the hands of their Russian captors.

The breakaway Donetsk People’s Republic prosecutor smirked as he informed a TV crew that his British hostages could be executed.

Andrei Spivak said: ‘They are charged with a number of crimes against civilians of the Donetsk People’s Republic.

‘The maximum punishment for these crimes is the death penalty.’ 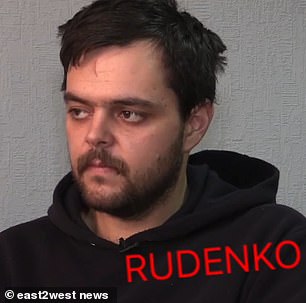 Captive Shaun Pinner, 48 (left), pictured in the past few days, is a Royal Anglian Regiment veteran. Right: ex-care worker Aiden Aslin, 28, went to Ukraine in 2018 after fighting with Kurds in Syria

Aiden was heard saying he understood the accusations against him, but strenuously denied killing any civilians while fighting in the ravaged Donbas region.

It is highly unlikely that the charges – including the death penalty – could have been brought without Russia’s approval.

Spivak said the pair are charged with ‘acting deliberately as part of the armed forces of Ukraine, being on the territory of the Donetsk People’s Republic in a time of war’.

Prosecutor Andrei Spivak told a TV crew: ‘They are charged with a number of crimes against civilians of the [DPR]. The maximum punishment for these crimes is the death penalty.’

They are also accused of trying to ‘forcibly seize and retain power’ of the Russia-backed separatist region.

Aslin said to camera: ‘I understand fully what I am accused off and I agree with it fully up to the part about murdering civilians. I don’t agree with [that].

‘I agree with the fact that I fought on the territory of the [DPR], and fought against soldiers in peaceful settlements.’

He admitted using arms and weapons systems alongside other foreigners including Pinner.

Pinner appeared drained as he said he understood the charges.

Neither of the men were seen pleading guilty.

It is unclear whether they’ve been told they could face the death penalty.

The news emerged as Russia claims it has tracked down one hundred British ‘mercenaries’ fighting in Ukraine.

Aiden’s mother Ang Wood said she was called by Russian captors urging her to be available for a video call.

They pressed her son to tell her to pressure Boris Johnson for him to be freed in exchange for pro-Kremlin politician Viktor Medvedchuk, she said.

Ms Wood added: ‘I told them that I expected them to treat him humanely and adhere to the terms of the Geneva Convention because he is a prisoner of war – a soldier in the Ukrainian army and has been for nearly four years.

‘He is not a mercenary, not a spy, as they have claimed before.’

Russia outlawed capital punishment in 1996, but some favour its reintroduction.

In February prime minister Dmitry Medvedev vowed to bring it back.

He said he hoped to ‘restore a number of important institutions’ including the death penalty for ‘the most dangerous criminals’.

Medvedev added: ‘By the way, it is actively used in the USA and China.’

Sibley leaves behind his daughter who was diagnosed with stage 4 high risk Neuroblastoma, a rare form of cancer that mostly affects young children.

Following her diagnosis in 2018, Sibley shaved his head so that his daughter would not feel different when she lost her hair, reported the BBC.

Sibley’s former squadron, the Army’s Logistic Support Squadron, paid tribute to the veteran, writing: ‘This week the Sqn has lost a former serving soldier. A man that showed Commando spirit until the end. RIP. Scott Sibley.’

A former comrade, Alex Darwin, paid tribute to his friend. ‘Sib, I’m in complete disbelief. What a pleasure to have served alongside you, to know you and to have experienced your kind nature.

‘You were there for me and I will forever be grateful. One hell of a beautiful guy, inside and out.’