Two men have been seriously injured after a botched cliff dive saw them plunge 100ft down the sheer rock face before belly-flopping into a water-filled ravine below.

Shocking footage showed the moment the unidentified men stood atop the cliff next to a wooden cross, took a deep breath, and then leapt one after the other into the abyss in the area of Canteras de Deuco in Angol, Chile, on January 4.

The first jumper landed mere feet from the cliff edge, narrowly escaping death, but hit the water with a sickening slap and sent water spraying high into the air despite holding a relatively stable body position.

His friend however could not retain his composure and began flailing a split second after taking flight. His erratic movements caused him to pitch forward, and seconds later he hit the water’s surface head first with a bone-shattering thud.

The divers reached speeds of well over 50mph in the roughly three seconds it took for them to plummet down the side of the rock.

In the clip, the sound of the impact as the bodies hit the surface was gut-wrenching and elicited a concerned response from the man behind the camera.

Local tour guide Ivan Ibasque told Chilean media: ‘At that height, the water acts like a solid, and it’s from that height that they hit the water. It’s like falling onto rocks.’

The alarm was raised by onlookers, one of whom told the Fire Department he’d had a similar accident at the popular cliff-diving spot.

The second commander of the Angol Fire Department, Pablo Staub, explained to the press that ‘around 4:30pm on Wednesday we received a report of a person falling from the Canteras de Deuco hill.

‘They say that they threw themselves from the cross. A boy who works in the region asked us for help because he had an accident here before, jumping from the rocks,’ Staub added.

This image taken from afar shows the rescue efforts carried out for the two people who jumped almost 100ft down a cliff face and into a ravine in the Las Canteras de Deuco sector in Angol, La Araucana Region, Chile 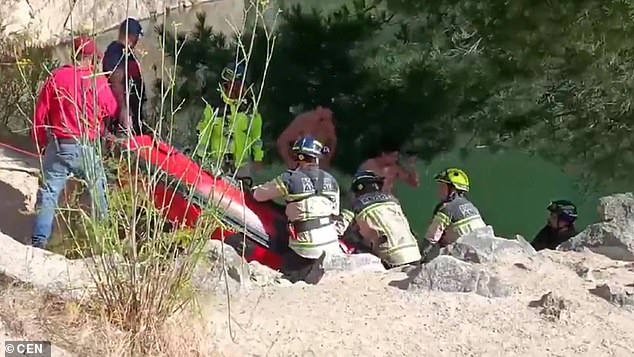 Both young men were taken to hospital in Angol.

One of them, who was said to be 22 years old and from Santiago, sustained ‘serious’ unspecified injuries.

His companion’s age was not provided in reports, but he is also thought to have sustained considerable trauma.

Local media reported that people have lost their lives in previous botched jumps from the same cliff.

Speaking at last year’s cliff diving competition in September, professional cliff diver Rhiannan Iffland, 31, from Australia, warned of the dangers of jumping into water from such a height, even for pros who make near-perfect entries.

‘The impact can be quite strong. It can feel like a car crash,’ she said.

‘It’s very intimidating. I don’t think it feels any different (today) than the first time, with that uncertainty,’ she admitted, adding that divers invest hours of training jumping from much lower heights before steadily working their way up. 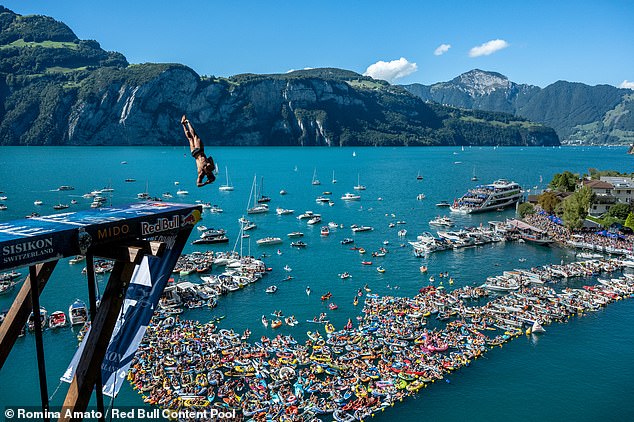