Are wee there yet? UK flight from Gran Canaria makes emergency landing in Bilbao so passengers can go to the toilet

A plane taking 200 holidaymakers back to Britain from Gran Canaria had to make an emergency landing in Bilbao – so passengers could go to the toilet.

The Jet2 flight LS782 left Las Palmas at 5.03pm, about an hour later than scheduled and was due to fly over the Atlantic, southern Portugal and western Spain.

However, it turned east just before it was flying over the north coast and crossing the Bay of Biscay.

It then flew two circuits and landed in Bilbao, where it stopped for around an hour so all passengers could have a comfort break around halfway through the flight – because the toilets were broken on board.

The Jet2 flight LS782 left Las Palmas at 5.03pm, about an hour later than scheduled and was due to fly over the Atlantic, southern Portugal and western Spain (stock image)

The flight stayed on the ground at Bilbao from 7.11pm GMT until 9.20pm.

During the break, technicians worked to fix the problems with the toilets and got rid of the residual water stored there.

The flight eventually carried on, going from the Basque Country over to the Bay of Biscay and then crossing France and heading over to Manchester.

A map shows the unusual route which had to be taken, including the stop in Bilbao.

There were no other problems with the plane and it arrived safely back in Manchester, two hours late – at 11.01pm.

Air traffic controllers did not know why the flight had stopped at first and were told when the plane came back.

No compensation is payable under European air passengers’ rights rules. 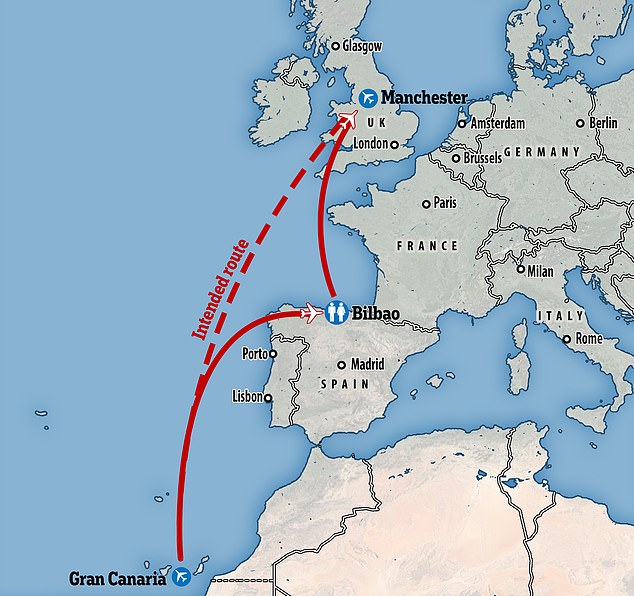 The diversion will have cost the airline thousands of pounds in fuel and airport handling fees.

A spokesperson for Jet2.com said: ‘Flight LS782 from Gran Canaria to Manchester was diverted to Bilbao last week (Thursday 3rd November) so that the toilet tank could be emptied.

‘Customers remained onboard, before the flight took off again to Manchester. As an award-winning airline, the comfort and well-being of our customers is of paramount importance to us, however we apologise if this caused any inconvenience.’

It comes after flight DY1156, which took off from Oslo Gardermoen for Munich, was forced to turn around in 2018 after the toilets broke.

The plane, which had 85 plumbers on board, only reached the Swedish border before it was required to turn back, circling for several minutes over Hedmark, Norway, to burn excess fuel.

The company’s CEO, Frank Olsen, said his staff were unable to intervene and correct the mid-flight problem because it could only be fixed via the exterior.

‘We would have liked to fix the restrooms, but unfortunately it had to be done from the outside and we didn’t risk sending a plumber to work at 10,000m,’ he told Dagbladet.

‘There was a good atmosphere in the plane, what with the irony about the broken toilets.’

Thankfully, ground engineers at Oslo Gardermoen managed to resolve the issue and, upon its second attempt, the plane successfully completed the trip to Munich, landing circa midday.