By Stewart Carr For Mailonline

Council workers in a Ukrainian port city have torn down a monument to Russian empress Catherine the Great after a public vote to get rid of it.

The statue of Catherine II, also known as Catherine the Great, was erected in 1900 in Odessa to celebrate the 100th anniversary of the city’s founding.

The local authority organized an online vote on the fate of the monument.

On November 5, Odessa City Council announced that the majority of its voters (50.2%) supported dismantling the monument amid the Russian invasion. 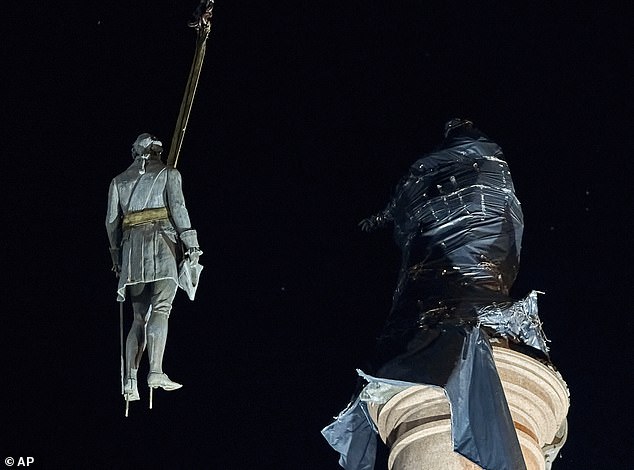 Workers remove part of the monument to Catherine II, also known as ‘Monument to the Founders of Odesa’ in Odesa, Ukraine, early Thursday, Dec. 29, 2022

Russian troops entered Ukraine on February 24, starting a conflict that has provoked destruction and a humanitarian crisis.

Russia’s foreign minister said today that he was convinced that Moscow would achieve its goals in Ukraine thanks to its ‘patience’ and ‘perseverance’.

‘I am convinced that thanks to our perseverance, patience and determination, we will defend the noble goals that are vital for our people and our country,’ Russia’s top diplomat Sergei Lavrov said in an interview broadcast on national television Wednesday.

He reiterated Moscow’s stance that for talks to resume Kyiv should recognise the annexation by Russia of four Ukrainian regions.

President Vladimir Putin has gifted eight golden rings to Moscow-allied leaders of post-Soviet countries, sparking a torrent of jokes and comparisons with power-hungry tyrant Sauron from The Lord of the Rings trilogy. 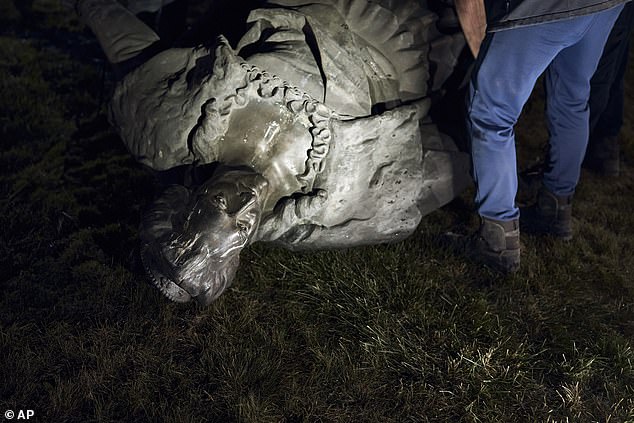 Workers remove the monument to Catherine II, also known as ‘Monument to the Founders of Odesa’ in Odesa 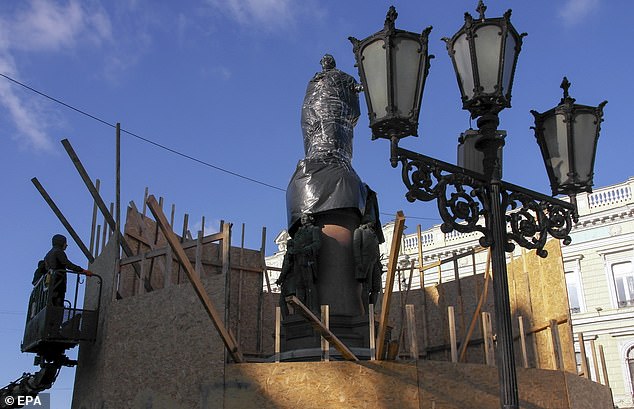 The statue of Catherine II, also known as Catherine the Great, was erected in 1900 in Odessa to celebrate the 100th anniversary of the city’s founding

Since Putin sent troops to Ukraine in February, the Ukrainian authorities have regularly compared Russia to ‘Mordor’, the kingdom of Sauron, and Russian forces to ‘Orcs’, the soldiers of Sauron.

At first glance the gifting of the rings looks like a ‘fever dream’, wrote Schulmann, a Tolkien aficionado.

‘It was of course done deliberately,’ she added on messaging app Telegram.

Another political commentator, Yulia Latynina, called the gifts ‘rings of powerlessness,’ an apparent reference to Putin’s growing international isolation over his assault on Ukraine. 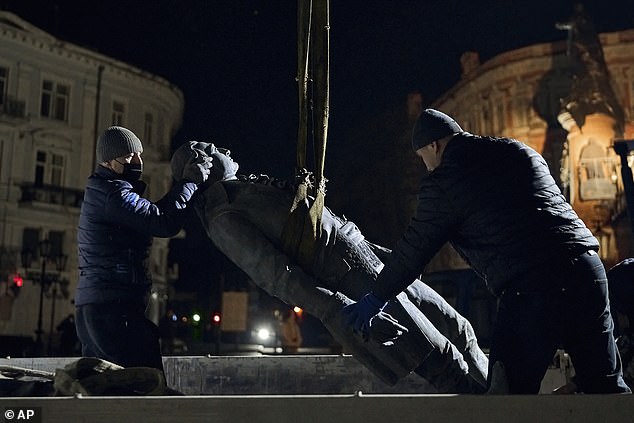 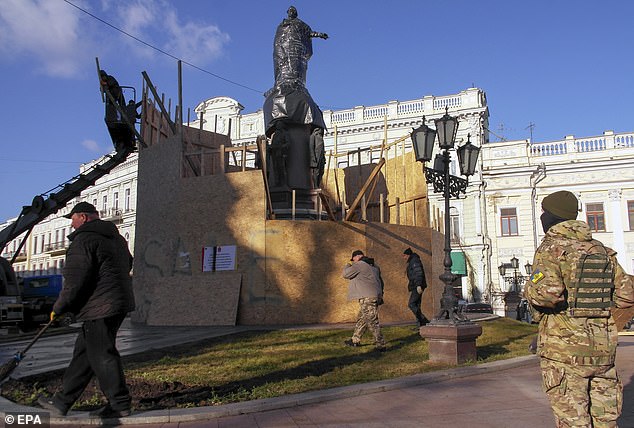 The local authority held a public vote in Odessa, with over 50 per cent of voters opting to dismantle the monument to the Russian Empress

‘Every state whose ruler puts on this ring will turn into darkness ruled by a madman,’ Latynina quipped.

‘I think Putin will wear the ring alone. And not for long.’

Wits in Ukraine had particular fun mocking the Kremlin chief.

‘Putin got tired of being the Hitler of the 21st century and decided to play Lord of the Rings,’ wrote Ukrainian lawmaker Oleksiy Goncharenko.

Kremlin spokesman Dmitry Peskov said there was no need to read too much into the meaning of the gifts.

‘It’s just a New Year’s souvenir, there’s nothing special about it,’ he said. Putin will not be wearing his ring, he added.

Who was Catherine the Great?

Born Princess Sophie Friederike of Anhalt-Zerbst in Stettin in 1729,  Catherine the Great ruled as all-supreme Empress of Russia from December 25, 1761, until her death in 1796.

She was the foremost female political figure of her era and and followed in the footsteps of Peter the Great – leading Russia out of isolation into a western super power.

Originally a lower-ranking royal of Pomerania, in modern day Poland, the young Sophie Friederike was unhappily wed at 15 to the Russian Tsarevich Peter.

She spent many lonely years in the court of her husband’s aunt, the Russian Empress Elizaveta, where eventually she gave birth to an heir, named Paul.

After Elizaveta’s death, Catherine’s husband succeeded the throne as Peter III but he was widely regarded as a dangerous and unstable ruler, obsessed with the army, and he planned to dispose of his talented consort.

Faced with imminent arrest, the young Empress roused her allies and led a successful revolt to depose her husband, who died in custody under suspicious circumstances, and she assumed the throne in her own right as Catherine II. 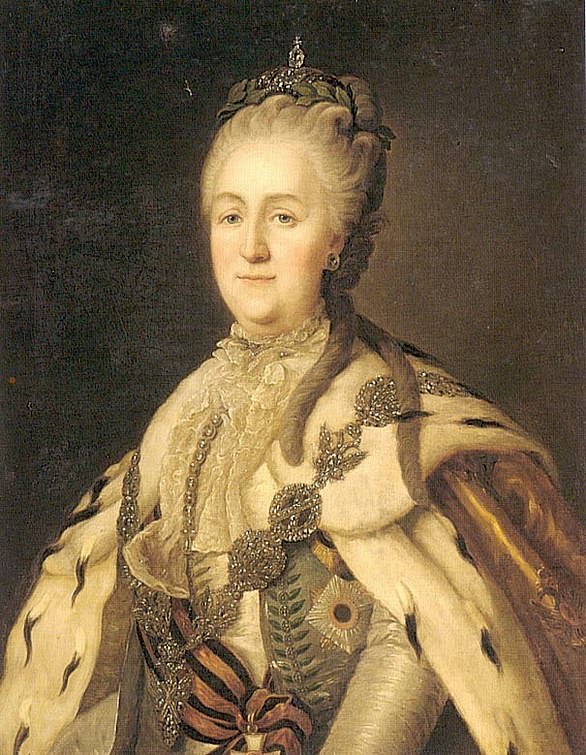 Catherine the Great, pictured, was the foremost female political leader of her generation and one of the most powerful women in history

Her rule was marked by an aggressive expansion in territory, making the country a modern-day superpower, along with its first stages of industrialisation.

She introduced vaccination against smallpox in Russia and fought off aggression from the Ottoman Empire, as well as several pretenders to her throne.

Always generous in her patronage towards artists, architects and writers, Catherine the Great’s reign was known as ‘the golden age of Russia’.

However, as a woman in power, she faced epic levels of misogyny – including spiteful rumours surrounding her sexual appetite.

One false rumour spread after her death was that she died while having intimate relations with a horse.

After her death, she was succeeded by her son Tsar Paul who, never able to match his mother’s achievements, introduced a Salic law banning women from inheriting the Russian throne.