Sam Bankman-Fried opened up in an interview about his mistakes with FTX and  blamed his ex-girlfriend for his downfall.

Bankman-Fried, 30, is still in the Bahamas following his company’s $32 billion loss, but openly spoke with Vox reporter Kelsey Piper through Twitter’s direct message feature on Tuesday about his current circumstances with little remorse.

The FTX owner told Piper that his ex-girlfriend Caroline Ellison’s company Alameda was responsible for gambling and losing his company’s money – to which he was ‘oblivious’ until it was too late.

Bankman-Fried responded: ‘And also thought Alameda had enough collateral to [reasonably] cover it.’

‘It was never the intention,’ he later added. Sometimes life creeps up on you.’

When asked what he would’ve done differently if he got another shot, the FTX owner said he would ‘off-board Alameda from FTX.’

The FTX owner also walked back his previous comments about the importance of ethics and called it a ‘front.’

Sam Bankman-Fried, 30, blamed his ex-girlfriend for the collapse of his company 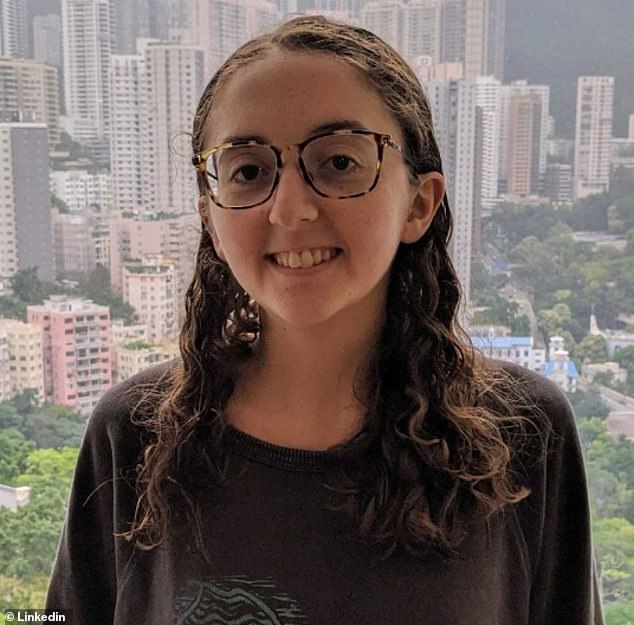 Over the summer, Bankman-Fried opened up to Piper about unethical moves within the crypto world and how ‘unethical’ decisions cause ‘massively more damage than good.’

Bankman-Fried is now backtracking on his statement about unethical moves and calling it a ‘front.’

‘Man all the dumb s*** I said,’ Bankman-Fried told Piper on Tuesday. ‘It’s not true, not really… some of this decade’s greatest heroes will never be known, and some of its most beloved people are basically shams.’

Bankman-Fried then discussed ethics as if it was a game – to which Piper said: ‘You were really good at talking about ethics, for someone who kind of saw it all as a game with winners and losers.’

‘Ya hehe – I had to be. It’s what reputations are made of, to some extent,’ Bankman-Fried wrote. ‘I feel bad for those who get f***** by it… by this dumb game we woke westerners play where we say all the right shiboleths and so everyone likes us.’

Authorities in America and the Bahamas, where FTX was based and Bankman-Fried is currently holed up, are discussing the possibility of extraditing him to the United States for questioning.

The scandal has triggered a crisis of confidence in cryptocurrency as a whole and caused the value of assets including Bitcoin to plunge.

Last week it was reported that Alameda was allegedly transferred $10 billion of FTX customer money in secret by Bankman-Fried as investors withdrew $6 billion from the crypto platform last week.

Around $2 billion of the $10 billion transferred to Alameda is reportedly still missing.

The financial hole was revealed in records that Bankman-Fried shared with other senior executives last Sunday, according to the two sources.

The records provided an up-to-date account of the situation at the time, they said. Both sources held senior FTX positions until this week and said they were briefed on the company’s finances by top staff.

Bahamas-based FTX filed for bankruptcy on Friday after a rush of customer withdrawals earlier this week. A rescue deal with rival exchange Binance fell through, precipitating crypto’s highest-profile collapse in recent years.

Ellison and Bankman-Fried are understood to have dated, but have since split.

According to CoinDesk, she was among the nine friends who lived with the former tycoon in a luxury penthouse in the Bahamas.

He said he slept mostly on couches and beanbags at the five-bed mansion, which he is now trying to sell for $40million. 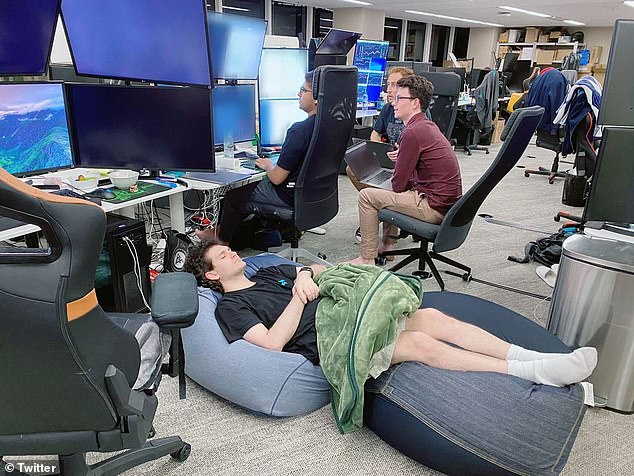 A string of A-list celebrities who publicly backed disgraced crypto trading platform FTX have been sued in a class action lawsuit worth $11 billion.

Stars including Tom Brady, Gisele Bundchen, Shaquille O’Neal, Steph Curry and Larry David are among those named in the suit filed in Florida.

It claims Bankman-Fried and the celebrities he recruited to endorse the firm are responsible for around $11 billion of losses to American consumers. Many of the stars were ‘ambassadors’ for the trading platform, while others appeared in prime-time commercials.

The suit, filed by class action attorney Adam Moskowitz, alleges they are collectively ‘responsible for the many billions of dollars in damages they caused Plaintiff’. It came as Bankman-Fried continued a desperate attempt to salvage his reputation on Wednesday by admitting: ‘We got overconfident and careless.’

He posted several tweets attempting to explain how FTX crashed and even talked up the firm’s extensive media coverage earlier this year, writing: ‘I was on the cover of every magazine, and FTX was the darling of Silicon Valley.’

Bankman-Fried is already subject to several investigations over the firm’s collapse. 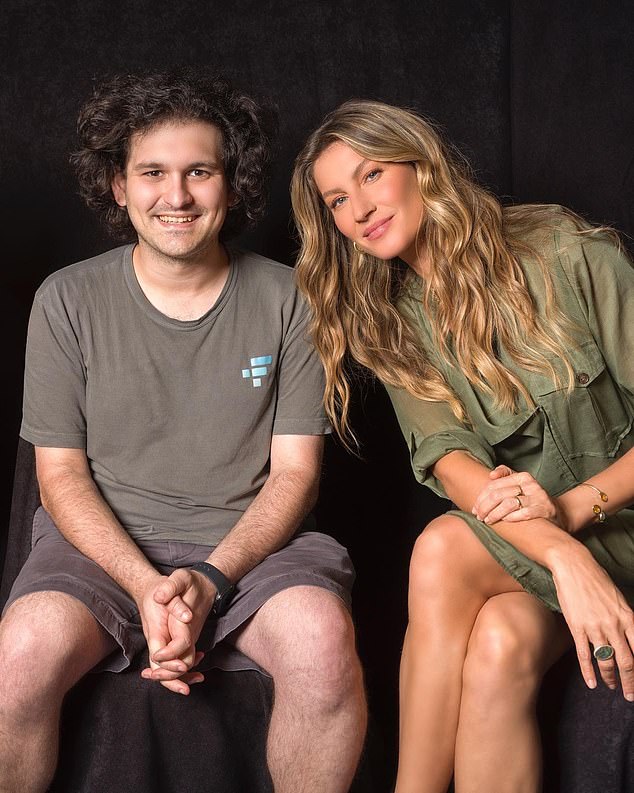 Bankman-Fried smiling next to Gisele Bundchen who was an ambassador for his company, FTX. The supermodel is named in a new class action lawsuit worth $11 billion 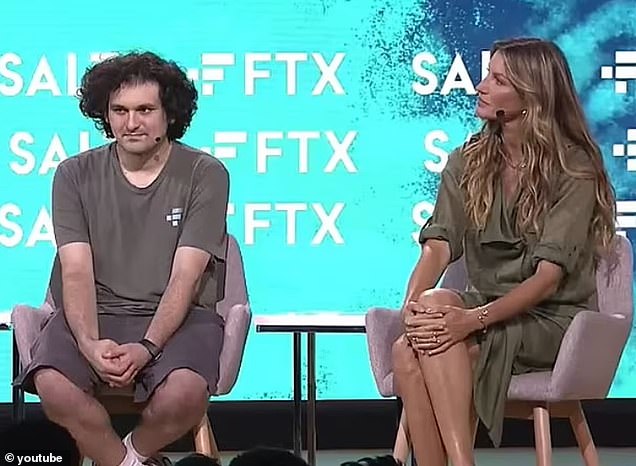 Bundchen looked glamorous on stage with Sam Bankman-Fried at the Crypto Bahamas event. The FTX chief looked awkward as he opted for his usual outfit of scruffy shorts and t-shirt

They are described in the 41-page as ‘parties who either controlled, promoted, assisted in, and actively participated in’ FTX’s operations, allegedly in breach of Florida law.

The suit adds: ‘The Deceptive and failed FTX Platform was based upon false representations and deceptive conduct.

‘Although many incriminating FTX emails and texts have already been destroyed, we located them and they evidence how FTX’s fraudulent scheme was designed to take advantage of unsophisticated investors from across the country, who utilize mobile apps to make their investments.

‘As a result, American consumers collectively sustained over $11 billion dollars in damages.’

NFL star Brady and Bundchen, his supermodel ex-wife, are named as FTX ambassadors who ‘joined the company’s $20-million ad campaign in 2021’  and starred in a commercial ‘showing them telling acquaintances to join the FTX platform’.

Basketballer Curry is singled out for appearing in an ad campaign in which he said he didn’t need to be an expert in crypto because ‘with FTX I have everything I need to buy, sell, and trade crypto safely’.

David appeared in a Super Bowl commercial for FTX which showed him portraying a series of clueless characters as they reject bright ideas through history, including the toilet and the lightbulb.

The ad then showed David reject FTX, before a message appears: ‘Don’t be like Larry.’ 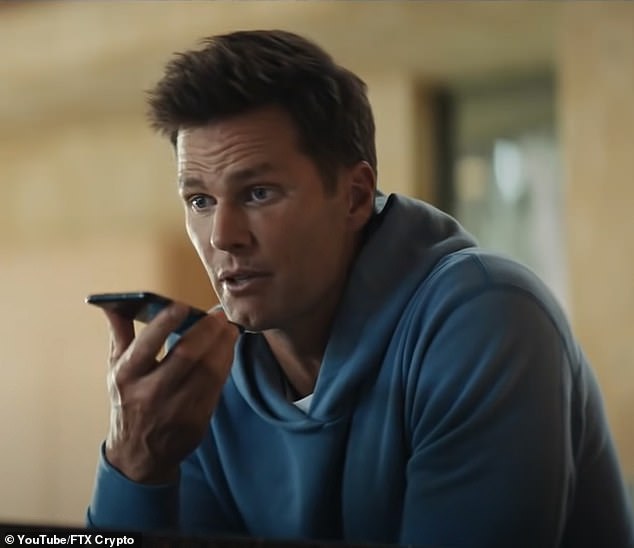 Brady was filmed at home calling around his friends to sign them up with FTX. The company marketed the ad campaign with the slogan: ‘Tom Brady is in. Are you?’ 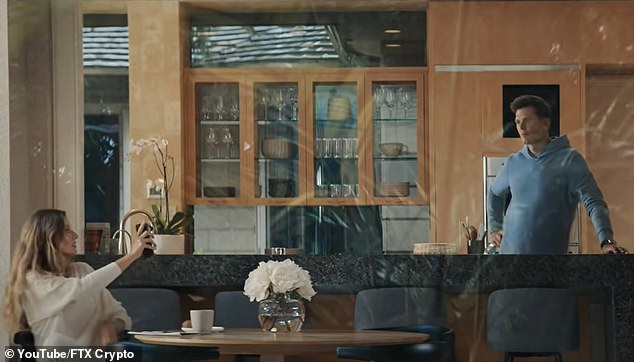 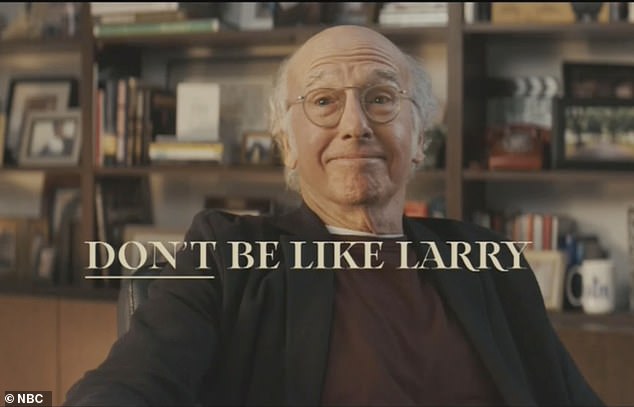 Larry David starred in a multimillion dollar Super Bowl ad in which he rejected cryptocurrency before viewers were told: ‘Don’t be like Larry.’ 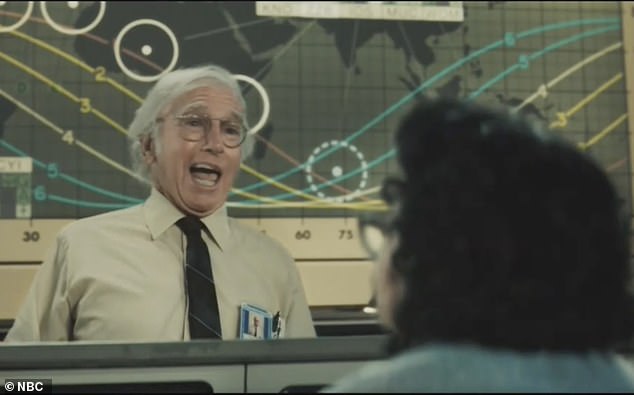 David portrays a number of characters who reject inventions and ideas including the lightbulb, the toilet and space travel. He then rejects FTX – before viewers are told: ‘Don’t be like Larry.’ 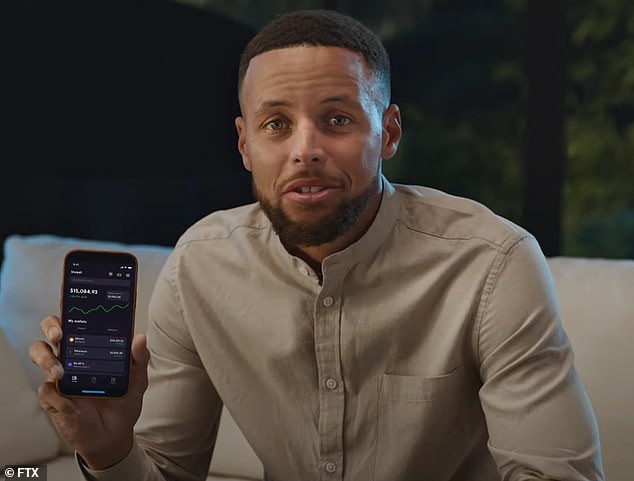 Steph Curry’s advert showed him telling viewers: ‘I’m not an expert and I don’t need to be, with FTX I have everything I need to buy, sell, and trade crypto safely.’ 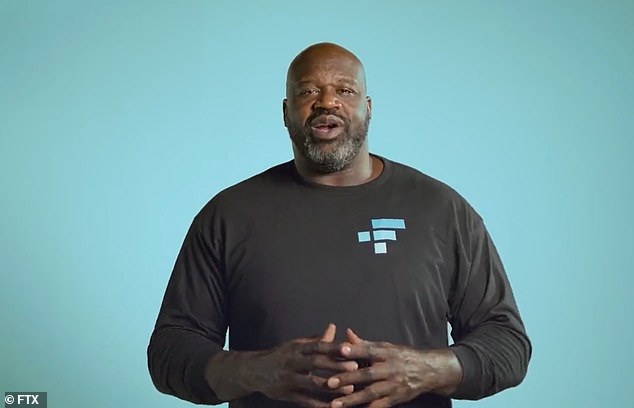 Shaq donned an FTX-branded sweater as he said: ‘Hey it’s Shaquille O’Neal and I’m excited to be partnering with FTX to help make crypto accessible to everyone. I’m all in, are you?’ 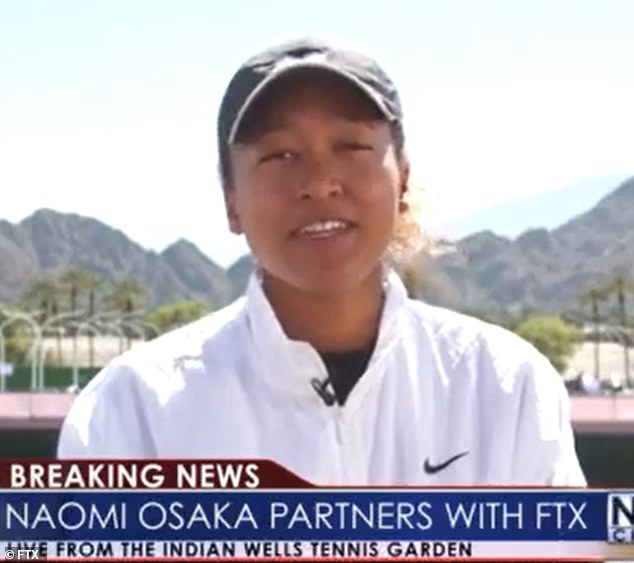 Tennis star Naomi Osaka said in her commercial: ‘I’m proud to partner with FTX. Making cryptocurrency accessible is a goal that FTX and I striving towards.’

Shaquille O’Neal also appeared in an FTX commercial, as did Steph Curry. Osaka was an ‘ambassador’ for the company.

The lawsuit states: ‘The Deceptive FTX Platform maintained by the FTX Entities was truly a house of cards, a Ponzi scheme where the FTX Entities shuffled customer funds between their opaque affiliated entities, using new investor funds obtained through investments in the YBAs [yield-bearing accounts] and loans to pay interest to the old ones and to attempt to maintain the appearance of liquidity.

‘Part of the scheme employed by the FTX Entities involved utilizing some of the biggest names in sports and entertainment – like these Defendants – to raise funds and drive American consumers to invest in the [yield-bearing accounts], which were offered and sold largely from the FTX Entities’ domestic base of operations here in Miami, Florida, pouring billions of dollars into the Deceptive FTX Platform to keep the whole scheme afloat.’

The suit was filed in the US District Court’s Southern District of Florida as Bankman-Fried continued his desperate attempts to save his empire.

In a series of tweets on Wednesday, he moaned that FTX ‘got overconfident and careless’, writing: ‘I was on the cover of every magazine, and FTX was the darling of Silicon Valley.’

The thread also said: ‘A few weeks ago, FTX was handling ~$10b/day of volume and billions of transfers.

‘But there was too much leverage–more than I realized. A run on the bank and market crash exhausted liquidity.

‘So what can I try to do? Raise liquidity, make customers whole, and restart.

‘Maybe I’ll fail. Maybe I won’t get anything more for customers than what’s already there.

‘I’ve certainly failed before. You all know that now, all too well.

‘But all I can do is to try. I’ve failed enough for the month.

‘And part of me thinks I might get somewhere.’ 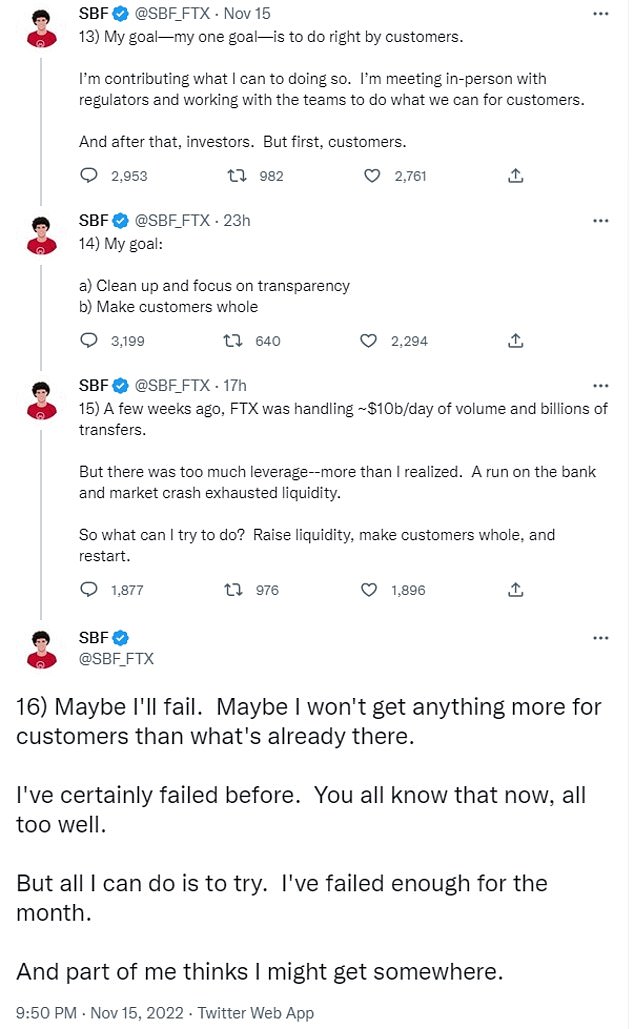 The rapid rise and swift downfall of crypto exchange FTX

Here is a history of FTX since its foundation in 2019:

October – FTX raised capital at a valuation of $25 billion from investors including Singapore’s Temasek and Tiger Global.

Jan. 27 – FTX’s U.S. arm said it was valued at $8 billion after raising $400 million in its first funding round from investors including SoftBank and Temasek.

Jan. 31 – FTX raised $400 million from investors including SoftBank at a valuation of $32 billion.

July 1 – FTX signed a deal with an option to buy embattled crypto lender BlockFi for up to $240 million.

July 29 – FTX said it won full approval to operate its exchange and clearing house in Dubai.

Aug. 19 – A U.S. bank regulator ordered crypto exchange FTX to halt ‘false and misleading’ claims it had made about whether funds at the company are insured by the government.

Nov. 6 – Binance CEO Changpeng Zhao said his firm would liquidate its holdings of FTT due to unspecified ‘recent revelations’.

Nov. 8 – FTT collapses by 72% as clients swamp the exchange with withdrawal requests. Binance offers a potential bailout in a non-binding deal.

Nov. 9 – Binance backs out of the rescue plan, saying: ‘As a result of corporate due diligence, as well as the latest news reports regarding mishandled customer funds and alleged US agency investigations, we have decided that we will not pursue the potential acquisition of FTX.com.’

Nov. 13  Police in the Bahamas announce a team from its Financial Crimes Investigation Branch are investigating whether any criminal misconduct occurred.

Nov. 15 – Bankman-Fried continues to plead with investors for money to cover the firm’s losses and tweets that he’s ‘meeting in-person with regulators and working with the teams to do what we can for customers’