But France’s disenchanted blue-collar workers may now end up propelling his rival Marine Le Pen into power after she secured a run-off against the president in the French elections.

The National Rally leader, 53, received 23.4 per cent of the vote in the first round yesterday, just four points behind Macron in the best ever showing by a far-right party.

The two will now face off in a head-to-head on April 24, with pollsters predicting a far closer showdown than their 2017 battle, with Le Pen currently forecast to take 49 per cent of the vote in the second round, well within the margin of error for victory.

While many of the losing candidates told their supporters not to back Le Pen in the second round, including far-left leader Jean-Luc Melenchon, her populist message focusing on the cost of living crisis is resonating across the political spectrum.

Sophie Pedder, Paris bureau chief for The Economist, told BBC’s Today: ‘She is really popular among blue collar voters, the low paid, people who work in service sector jobs, people who are struggling with paying the bills at the end of the month, who are facing real difficulties with the price of petrol filling up their cars.

‘Lots of them live in rural areas or areas where they need their cars to go to work.

Mr Macron, sitting president and leader of the On The Move! (EM!) party, will go head-to-head against Ms Le Pen, of the National Rally (RN) on April 24. 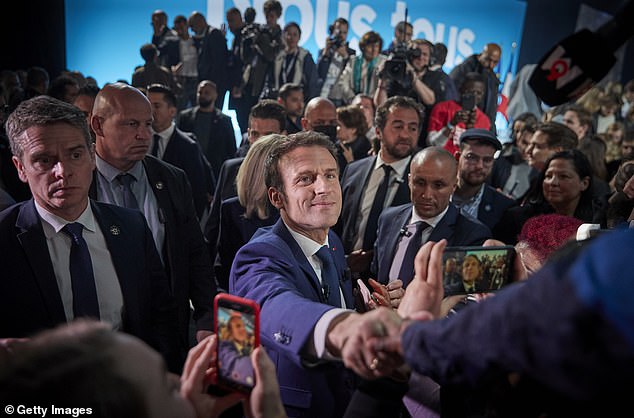 ‘This focus she has on the cost of living goes down really well with the Melenchon supporters on the radical left.’

Throughout the campaign, Le Pen has been visiting markets in towns and villages to meet with working class voters where the gilets jaunes protests were sparked, pushing the narrative that Macron has divided France and she is the one to unite it.

She said she is no longer the ‘big, bad wolf’ of politics, and has been positioning herself as a unifying and benign figure, posing for selfies with a teenager in a headscarf and sharing photos of her pet Bengal cats.

An Ifop survey in March showed that fewer than half of all French now found her ‘scary’.

In her speech on Sunday, she painted herself as a unifying figure, who would heal France’s ‘fractures’ and halt the ‘chaos’ supposedly brought about by Macron, a former banker who she said embodied the ‘power of money’ and worked for the few.

It is a far cry from her fiery performances in the last two elections in which she made a number of high-profile blunders, learning from her mistakes to play down her relationship with Vladimir Putin and fiercely condemning his invasion of Ukraine. 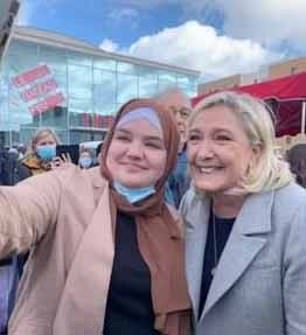 Le Pen posed with a teenager wearing a headscarf in Dunkirk

One Le Pen supporter said: ‘She did a great campaign, she was good all along, she was close to the people.

‘She wasn’t too much on the TV, she was more with us on the field, in the cities. She did everything right.

‘The difference is that in 2017, people voted for Macron because he was new and we didn’t know him so we were like, well let’s try it. We tried it and it was awful.’

Last week, pollster Brice Teinturier from Ipsos found that more people would expect an improvement in their own situation and the country’s if Le Pen were elected instead of Macron.

The pair are equally as trusted on the cost of living crisis, and 19 per cent would vote deliberately to stop Macron in a second round, compared to 18 per cent for Le Pen, showing the dissatisfaction with the current president.

Macron will start his campaign for the second round visiting former mining heartlands in Le Pen’s industrial heartlands of northern France in an early indication of how the blue-collar workforce will be a major election battleground.

With 12 candidates in the first round whittled down to two, now they must seek to appeal to the circa 50 per cent of voters who had other first-choice preferences.

In past elections at national, regional and municipal levels, left- and right-wing voters have historically united to block the far right from power, a phenomenon known as a ‘republicain front’.

While all mainstream candidates, including those of the conservative Les Republicains and Socialist party, endorsed Macron for the runoff on Sunday night, it is not clear their voters will follow.

Moreover, their low single-digit scores were so pitiful that their support may carry little weight.

The Le Pen-Macron head-to-head is a repeat of the 2017 presidential election, when the first-round results were 24.01 per cent for Macron, and 21.03 per cent for Le Pen.

Macron then went on to beat Le Pen with a resounding 66 per cent in the second round.

But experts say this election will be very different with voters disillusioned after five years of the centrist president’s globalist and pro-European policies, with Le Pen seeking to unite voters with her anti-Macron message.

Bruno Gollnisch, former MP for the Front National, said: ‘I think the circumstances are quite different from what they were five years ago because there are many people who are disappointed with Mr Macron’s policy. 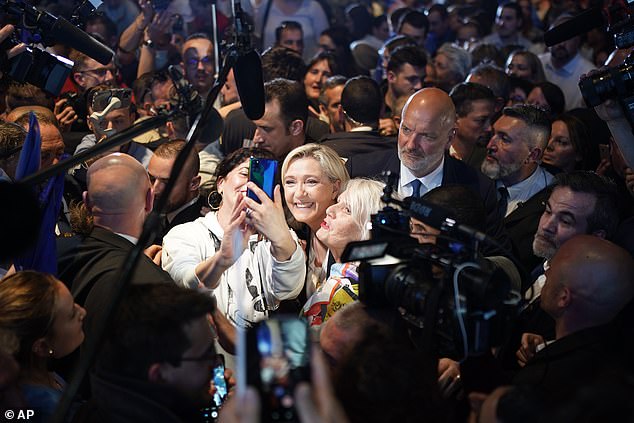 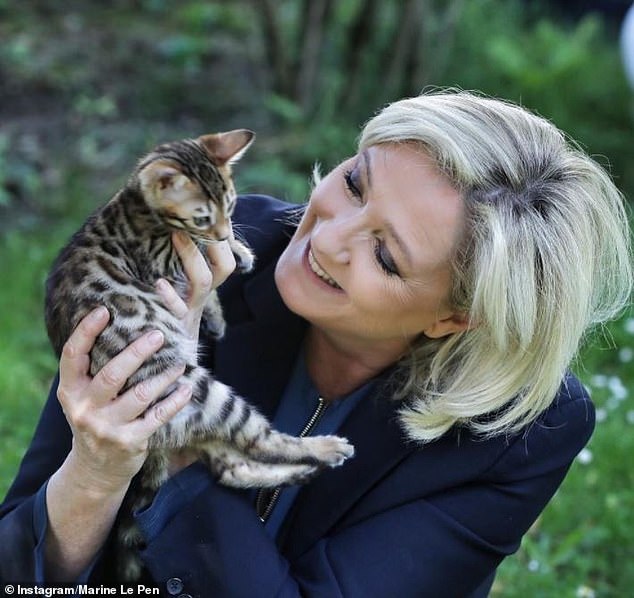 The National Rally leader has softened her image in this election, sharing photos of her pet cats with supporters

‘Either from the right or left, the real debate now will be between globalism on one side and difference of national identity on the other side.’

Marine took over as leader of the Front National in 2011 from her father Jean-Marie Le Pen, and she has since been trying to ‘de-demonise’ the party which its critics have accused of being racist and associated with Holocaust denial.

It has since been rebranded as National Rally and in 2015 Marine threw Jean-Marie out of the party he co-founded in the 1970s for repeating his view that the Holocaust was a mere ‘detail’ of World War II.

Cost of living: Lower VAT on fuel and energy from 20% to 5.5%. Income tax for under-30s scrapped as well as the TV licence fee, while highways would be renationalised

Immigration: Ban the Muslim headscarf from public spaces, hold a referendum on immigration to prioritise native French people for jobs, housing and healthcare

Pensions: Drop the pension age to 60 for those who started work before the age of 20

Immigration: Reform the asylum system to make it more efficient, long-stay permit is only given to people who pass a French language exam and are professionally successful

Pensions: Raise the pension age from 62 to 65 to keep the pension system afloat. Minimum pensions would be raised to €1,100 a month

But in a rare show of support, Jean-Marie congratulated his daughter last night on a ‘remarkable campaign’ as he predicted her election victory.

This election, her campaign has been quietly professional without major gaffes, and she has appeared more presidential than her far-right challenger, the controversial commentator Eric Zemmour, who received seven per cent of the vote.

But she did suffer a blow in January when her niece Marion Marechal, considered a likely successor as party leader, publicly backed Zemmour.

Marine’s emotional response on TV in which she described raising Marion as a baby saw her poll numbers rise while Zemmour’s fell.

‘One polished his presidential stature thanks to the Covid-19 crisis and the war in Ukraine.

‘The other captured the concern of the French about their purchasing power, while continuing to assume an identity and sovereignist project.’

Macron, a former finance minister, will likely target Le Pen’s economic programme after she vowed to lower the retirement age to 60, scrap income tax for the under-30s and reduce VAT on energy from 20 per cent to 5.5 per cent. 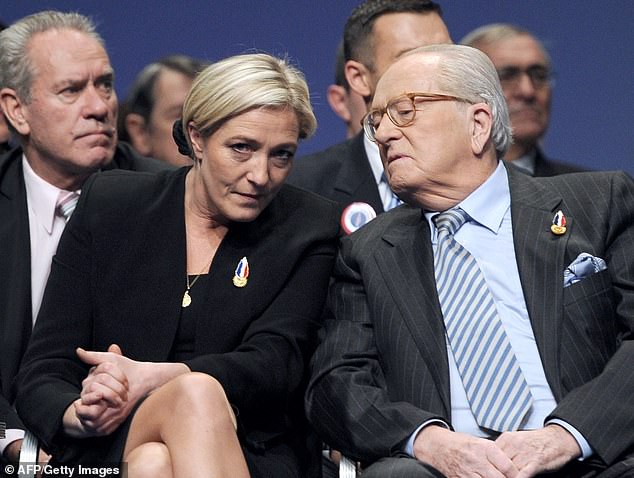 Speaking of his own manifesto, Macron said: ‘Do you want a France that speaks of full employment and is serious about financing its welfare state, its pensioners, its schools, hospitals and public services?’

‘Macron’s politics … has strengthened the far-right,’ voter Lea Druet, 27, told Reuters at Melenchon’s campaign headquarters. She voted for Macron in 2017 and said she would abstain in this month’s runoff.

Other Melenchon supporters were still unsure. ‘I’ll see how the next two weeks go. If the polls say 49-51, at that moment I will vote Macron,’ said Guillaume Raffi, 36, a music producer from Montpellier.

The current president has been vocally pro-EU despite a growing anti-European sentiment in France, hammering Britain over Brexit and playing hardball over fishing rights.

While Le Pen has dropped previous promises to leave the EU and the euro, she still wants to cut French budget contributions to the bloc and pursue a more isolationist European policy, that has endeared her to many voters.

Le Pen won 33 per cent of the votes in the northern industrial Hauts-de-France region.

Left-wing candidates won a combined 27-28 per cent of the vote in the area. How the left’s votes are redistributed nationally will be a key factor in the second-round vote’s outcome.

But it has been her focus on the cost-of-living issues troubling millions that has helped her tap into a widespread discontent towards rulers as she has toured towns and villages across France.

She said voters were making a choice between two opposite visions of France: ‘one of division, injustice and disorder imposed by Emmanuel Macron for the benefit of a few, the other a rallying together of French people around social justice and protection.’

Today, defeated candidates, including Valerie Pecresse of the conservative Republicans, and Anne Hidalgo, of the Socialists, immediately told their voters to back Mr Macron.

It is common for the French to unite in a so-called ‘Republican Front’ when an extremist candidate reaches the second round. 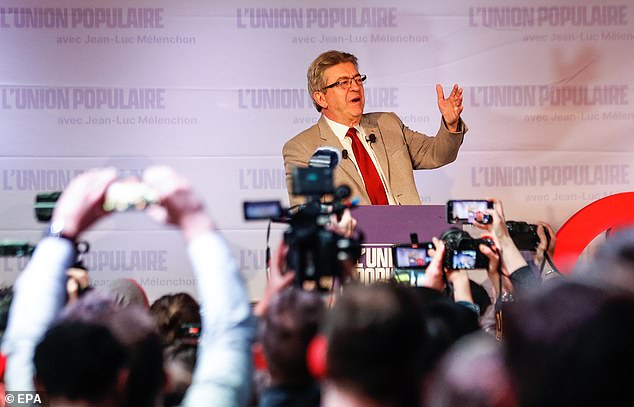 Left-wing candidate Jean-Luc Melenchon came close to pipping Ms Le Pen on Sunday, with 22.2 per cent of the vote – just 1.2 per cent behind Ms Le Pen

Left-wing candidate Melenchon came close to pipping Le Pen on Sunday, with 22.2 per cent of the vote – just 1.2 per cent behind Le Pen.

Melenchon has also told his supporters to vote against Ms Le Pen in the next round.

Addressing his supporters in Paris after the preliminary results were announced, President Macron said: ‘We have a rich democracy – one that is defended by everyone who fights for their values and their ideas.

‘I would now like to formally invite all our fellow citizens, no matter what they voted in the first round, to join our movement.’

He added: ‘Let’s not kid ourselves, nothing is certain, and the debates over the next two weeks, will be a deciding moment for our country and for Europe.’

In turn, Le Pen immediately projected the upcoming head-to-head confrontation with Mr Macron as a ‘choice between civilisations’, saying she would become ‘the President of all the French people’.

Speaking to her own supporters in the French capital on Sunday night, she portrayed the incumbent president as a globalist puppet who could not be trusted.

‘The French people have spoken, and do me the honour of qualifying to take on the outgoing president,’ said Le Pen.

‘On April 24 it will be a fundamental choice between two opposing visions of the country – either division and disorder, or the rallying of French people around social justice guaranteed by a fraternal framework.’