By Vivek Chaudhary and Dale Fox For Mailonline

Gay couples will be able to openly hold hands, cuddle and kiss at the Qatar World Cup, despite public displays of affection being outlawed by the Arab state, it has been revealed.

Despite the move, it’s feared that once the World Cup is over, LGBTQ+ people in the country who enjoy the temporary freedom will be punished anyway.

FIFA has held secret meetings with Qatar’s Interior Ministry and persuaded it to stop officers from its Preventive Security Department arresting gay supporters at the World Cup.

Undercover spies from the ministry were reported to be set to mingle among fans and haul so-called offenders into custody.

Speaking through her office manager, a lesbian secretary told Mail Online: ‘The World Cup has given us the protection we need for maybe a month.

Members of the Al Fazaa police force stand near the Flag Plaza ahead of the FIFA World Cup Qatar 2022 on 17 November in Doha, Qatar 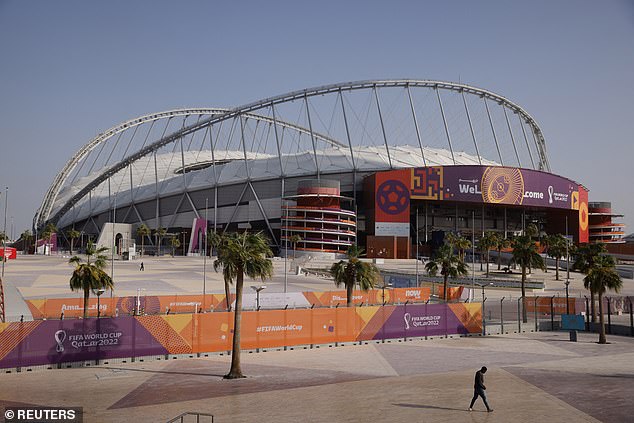 The Khalifa International Stadium in Doha, one of the official stadiums of the 2022 World Cup, is pictured on 14 November

‘But you will find very few Qatari gay and lesbian people who will believe there will be no repercussions after the World Cup is over.

‘There may not be trouble while football is here, but they will catch up with Qatari people after, beat and jail us for what they see as shaming the country.’

The 30-year-old added: ‘As a lesbian woman, I will enjoy the World Cup like other fans, but you won’t see me hugging my girlfriend in Doha. No way.

‘We will keep our relationship private like many others here.’

Despite the temporary measures, official Foreign Office advice for travelers remains the same, stating simply that ‘homosexuality is illegal in Qatar.’

Foreign Secretary James Cleverly had warned England and Wales supporters last month: ‘These are Muslim countries; they have a very different cultural starting point (from ours).

‘I think it’s important when you’re a visitor to a country that you respect the culture of your host nation.’

The decision to stage the World Cup in Qatar, a country where homosexuality can be punishable by death, has been attacked by gay and human rights organisations since the country was announced as the 2022 host.

‘LGBT+ people there can be subjected to police harassment on the street and in shopping malls for merely ‘looking’ gay,” British human rights campaigner Peter Tatchell wrote for MailOnline.

‘There are reports of LGBT+ people being entrapped by police using gay dating apps and being murdered in ‘honour’ killings by their families,’ he added.

Mr Tatchell was questioned by police in Qatar last month after protesting the country’s homsexuality laws on the streets of Doha. 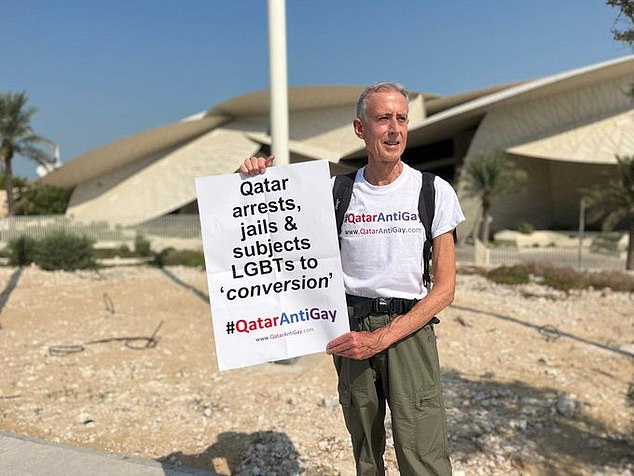 Meanwhile, Human Rights Watch said it has documented six cases of severe and repeated beatings and five cases of sexual harassment against LGBTQ+ people in police custody between 2019 and 2022.

‘While Qatar prepares to host the World Cup, security forces are detaining and abusing LGBT people simply for who they are, apparently confident that the security force abuses will go unreported and unchecked,’  it said

‘Qatari authorities need to end impunity for violence against LGBT people. The world is watching.’