A tunnel carved through layers of rock has been discovered beneath Egypt’s ancient Taposiris Magna Temple, which may lead to the long-lost tomb of Cleopatra.

The tunnel, which is being hailed as a ‘geometric miracle’, stretches for more than 4,800 feet, measures about six feet high and is said to resemble the Tunnel of Eupalinos on the Greek island of Samos – revered as one of the most important engineering achievements of the Classical world.

Archaeologist Kathleen Martinez of the University of San Domingo has been convinced for more than a decade that Egypt’s last pharaoh Cleopatra and her lover Mark Antony were laid to rest within the temple, and is sure the tunnel could be the path to this discovery.

The Taposiris Magna Temple, whose name means ‘great tomb of Osiris’, is located near the ancient Egyptian capital of Alexandria.

Martinez told Heritage Key that there is a 1 per cent chance the queen is buried there and if she is, finding the remains of Egypt’s last pharaoh would be ‘the most important discovery of the 21st century.’ 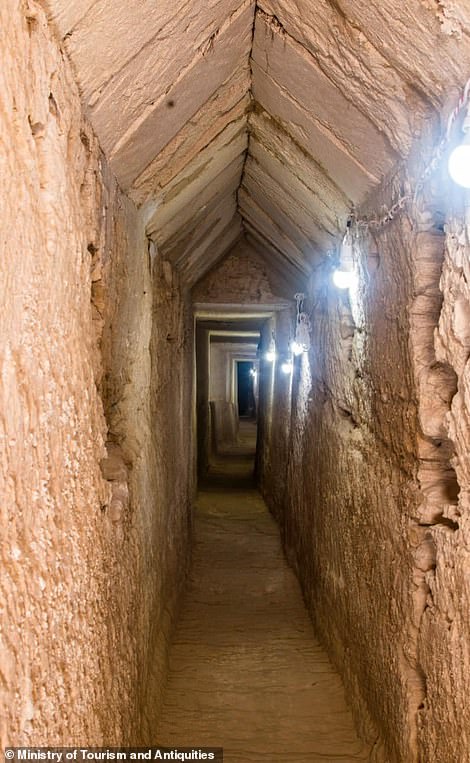 The carved rock, which is being hailed as a ‘geometric miracle’, stretches for more than 4,800 feet and measures about six feet high. Archaeologists are hopeful that Cleopatra and her lover Mark Antony’s remains are at the end of the tunnel 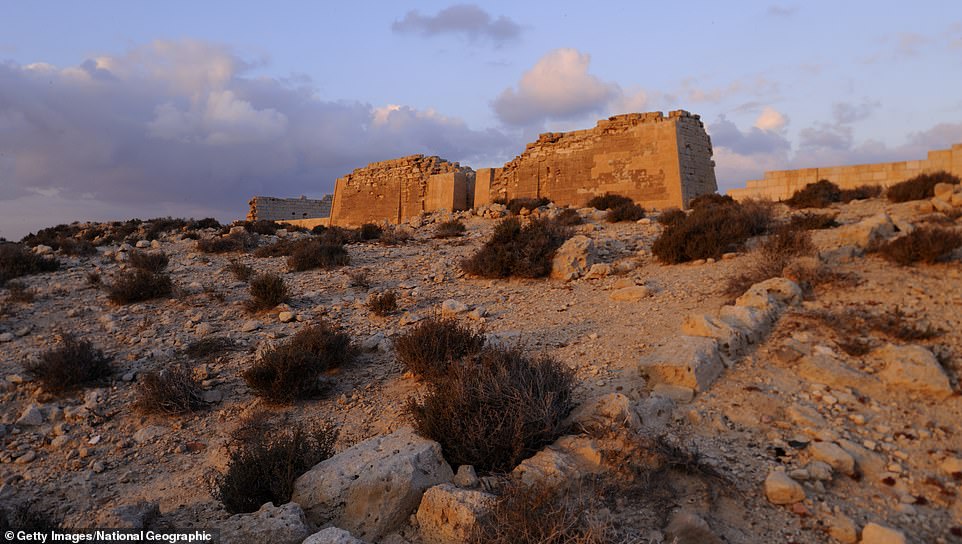 Cleopatra ruled from 51 BC to 30 BC – right up until the day she died. She was the queen of Egypt and the last and most famous of the Ptolemaic dynasty 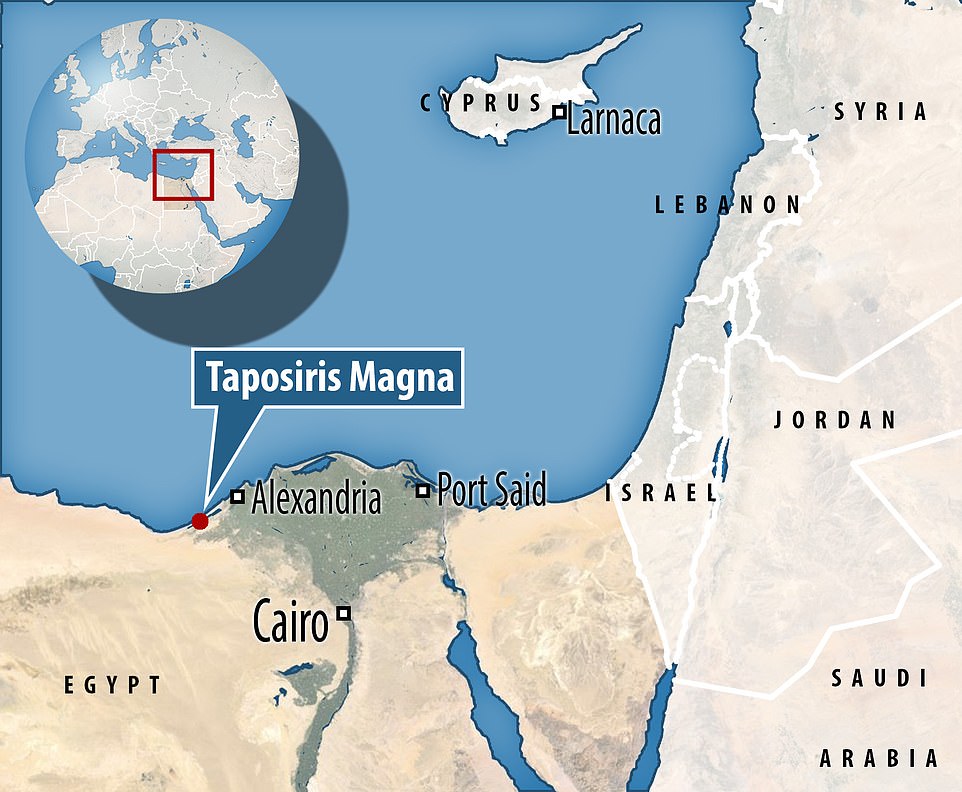 The Taposiris Magna Temple is located near Alexandria, the capital of ancient Egypt and where Cleopatra killed herself in 30 BC

The archaeologist believes that, after Mark Antony killed himself following his defeat to Caesar Augustus, also known as Octavian, Cleopatra put detailed plans in place for them both to be buried there, in echoes of the myth.

Taposiris Magna is a city in Egypt established by Pharaoh Ptolemy II Philadelphus between 280 and 270 BC.

Its position on the arm of the now dried up bed of Lake Mareotis suggests it may have played a role in trade between Egypt and Libya.

Traders from the west would be able to go by water to the harbor, then take a caravan route onwards.

The name means ‘great tomb of Osiris’ and likely comes from a great temple.

During an excavation in 2020 a team of archaeologists found a mummy with a golden tongue, likely so that it could speak with Osiris in the afterlife.

The temple in the city was thought to be the final resting place of Cleopatra.

Martinez, who has been working at the Taposiris Magna Temple for over 15 years, previously told National Geographic: ‘Cleopatra negotiated with Octavian to allow her to bury Mark Antony in Egypt.

‘She wanted to be buried with him because she wanted to reenact the legend of Isis and Osiris.

‘The true meaning of the cult of Osiris is that it grants immortality.

‘After their deaths, the gods would allow Cleopatra to live with Antony in another form of existence, so they would have eternal life together.’

Martinez may now be on the right track after uncovering the tunnel carved in rock that sits about 43 feet below the temple.

Teams working at the site found a part of the tunnel that was submerged under the Mediterranean, a number of pottery vessels and pottery tractors were found under the mud sediment, as well as a rectangular block of limestone and a blind completion.

The research team believes that the Taposiris Magna Temple’s foundation may also be underwater due to at least 23 earthquakes hitting the Egyptian coast between 320 AD and 1303 AD.

Martinez also uncovered several important artifacts inside the temple including coins bearing the images and names of both Queen Cleopatra, Alexander the Great and a number of beheaded statues, and statues of the goddess Isis, as well.

Two years ago, the team reported the discovery of two mummies of two high-status ancient Egyptians – one male and one female.

The mummies, which had lain undisturbed for 2,000 years, are in a poor state of preservation because water had seeped into the tomb, but they were originally covered with gold leaf, a luxury reserved for only the top members of society’s elite, suggesting they personally interacted with Cleopatra.

The male and female may have been priests who played a key role in maintaining the power of the legendary Egyptian queen and her lover, Mark Antony. 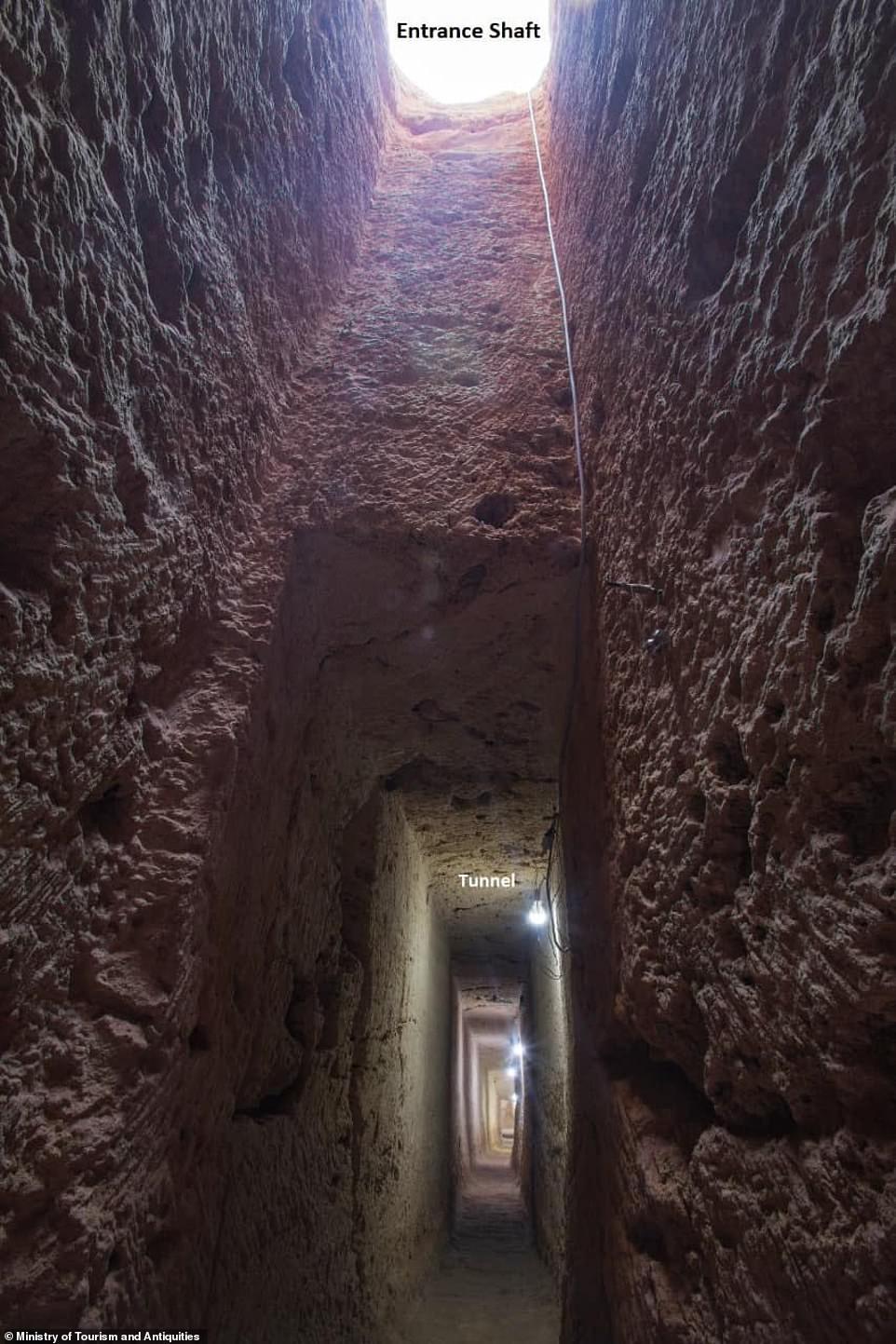 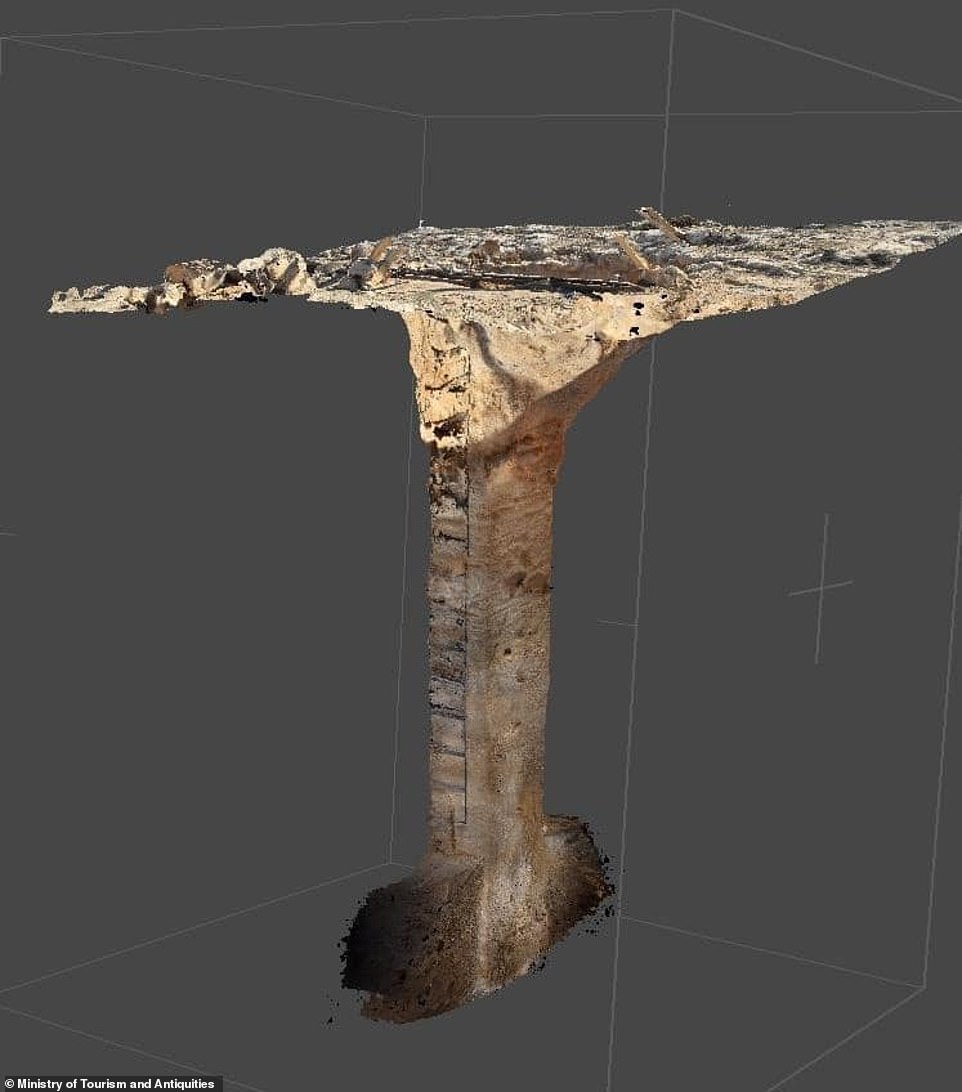 During the excavations, part of the tunnel was discovered submerged beneath the Mediterranean, and a number of pottery vessels and pottery tractors were found under the mud sediment 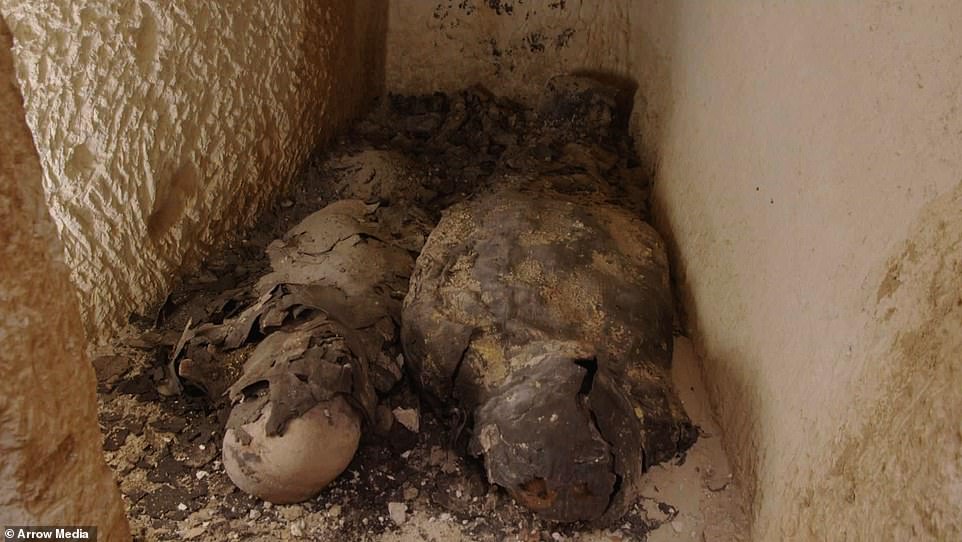 Pictured, two mummies found two years ago inside a sealed tomb at Taposiris Magna, where digs are ongoing to uncover the grave of Cleopatra 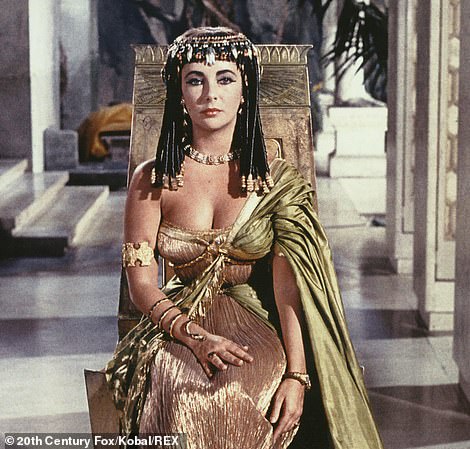 Cleopatra ruled from 51 BC to 30 BC – right up until the day she died, Pictured is Elizabeth Taylor as the queen in the 1960 film Cleopatra

Cleopatra, often known as the world’s first celebrity, was the last of a long line to Ptolemaic rulers of Egypt – descended from Greek general Alexander the Great.

Cleopatra became Cleopatra VII, queen of Egypt, upon the death of her father, Ptolemy XII, and her brother was made King Ptolemy XIII at the same time. The siblings ruled Egypt under the formal title of husband and wife.

In order to fix herself and Antony as rulers in the minds of the Egyptian people, she also worked hard to associate themselves with the myth of Isis and Osiris.

To gain support among the ancient Egyptian people, Cleopatra was also proclaimed the daughter of Re, the Egyptian sun god.

During her life, which ran from 69 BC to 30 BC, Cleopatra was known both as a seductress and as a captivating personality – as depicted by Elizabeth Taylor in the 1963 film ‘Cleopatra’.

She famously used her charms to first seduce Julius Caesar to cement Egypt’s alliance with Rome, and then to seduce one his second in command, Mark Antony.

However, Antony married another woman, Octavia, to mend a strained alliance with her brother, the ruler Octavian. 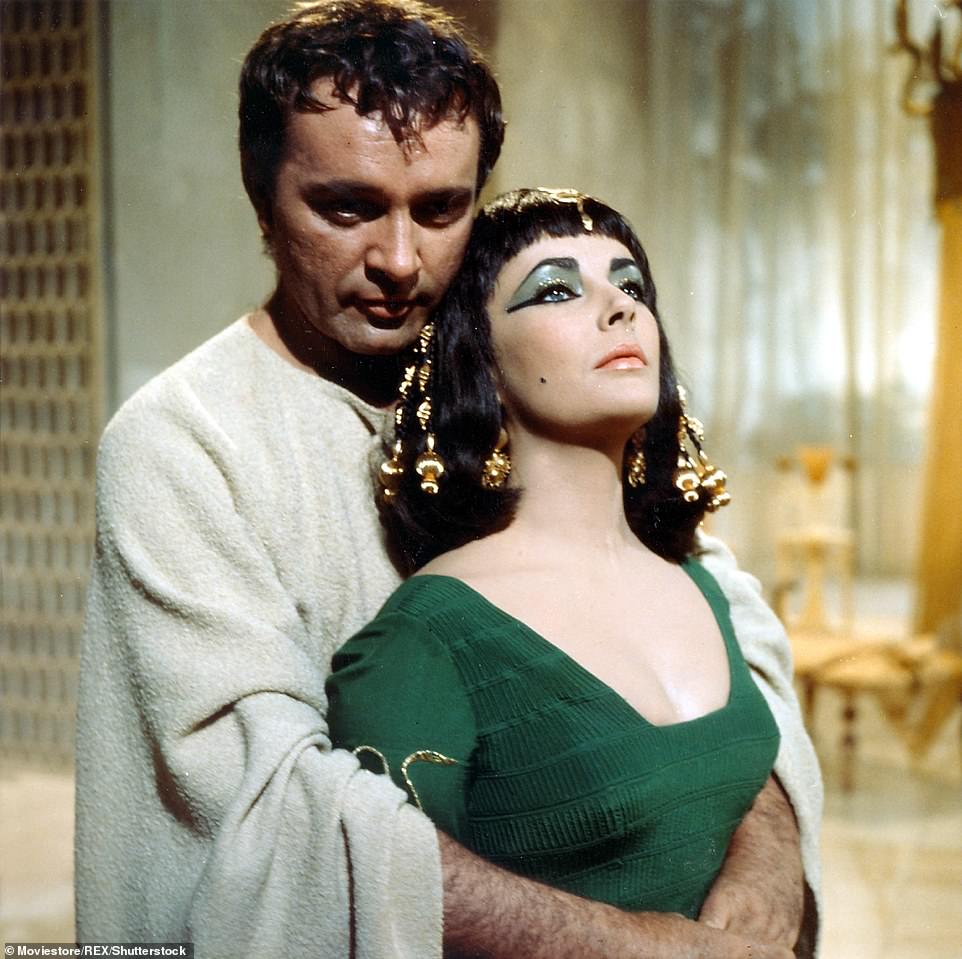 Archaeologists believe they found where the crypt of Antony and Cleopatra is buried. Historians say they believe they know where to dig and hope to uncover the tomb soon. Here, Richard Burton and Elizabeth Taylor star as the famed ancient couple in the 1963 film (file photo) 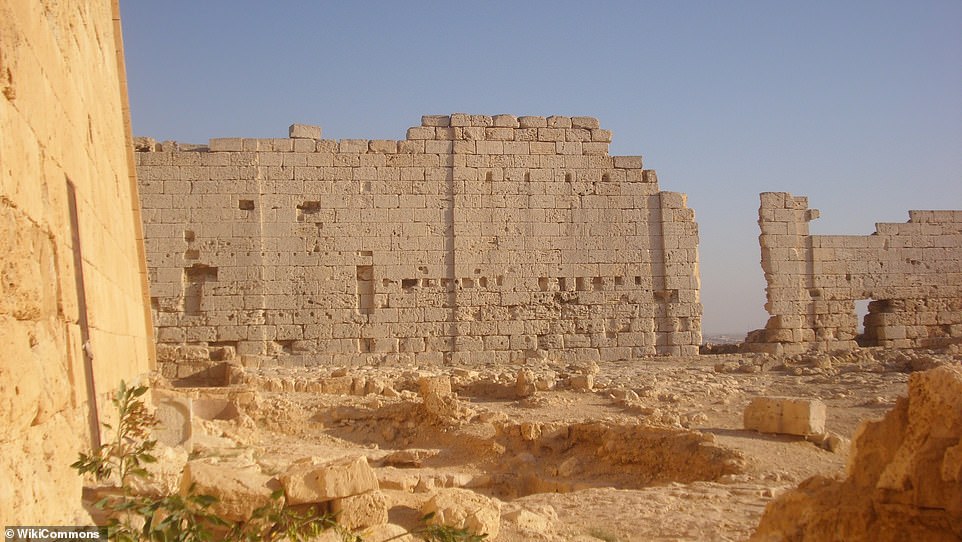 The Taposiris Magna Temple, whose name means ‘great tomb of Osiris’, is located near the ancient Egyptian capital of Alexandria. Pictured, an internal view towards south of the Osiris Temple in Taposiris Magna

HOW DID CLEOPATRA AND MARK ANTONY DIE?

In 41 BC, Mark Antony was in dispute with Julius Caesar’s adopted son Octavian, which was known as The War between Antony and Octavian over the succession of the Roman leadership.

In 31 BC, Mark Antony and Cleopatra combined armies to take on Octavian in a sea battle at Actium, on the west coast of Greece.

Octavian won the battle after one of Antony’s former generals delivered to Octavian Antony’s battle plan.

Cleopatra and Mark Antony fled to Egypt but Octavian pursued them and captured Alexandria in 30 BC.

With his soldiers deserting him, Mark Antony took his own life and Cleopatra chose the same course, committing suicide on the 12th August 30 BC.

Antony later left his new wife for Cleopatra, according to the History Channel, and the lovers were then married, which violated a Roman law restricting Romans from marrying foreigners. Octavian then declared war on Cleopatra and Antony, defeating them both.

Cleopatra then took refuge in the mausoleum she had commissioned for herself and her disappearance led to the belief that she had killed herself.

Antony died in Cleopatra’s arms after fatally stabbing himself because he thought his queen had taken her own life.

Cleopatra did then kill herself shortly after her lover succumbed to his wounds – reportedly by letting a poisonous snake bite her, although this has been debated.

Ancient accounts tell of a snake that was hidden inside a basket of figs brought in from the countryside and was used by the queen to commit suicide on August 12, 30 BC, as well as killing two of her servants.

But academics have dismissed the popular view, saying venomous snakes in Egypt, such as cobras and vipers, would have been too large to sneak unseen into the palace.

Octavian returned to Italy where he became the first Emperor of Rome, while Cleopatra and Antony were buried somewhere in Egypt. And their tombs could be somewhere through the newly discovered tunnel.

However, some doubts have been cast on the theory that Cleopatra and Antony were buried at Taposiris Magna Temple.

Other experts believe Cleopatra was hastily buried in Alexandria itself – the city from where she ruled Egypt until her death in 30 BC, at the age of just 39. 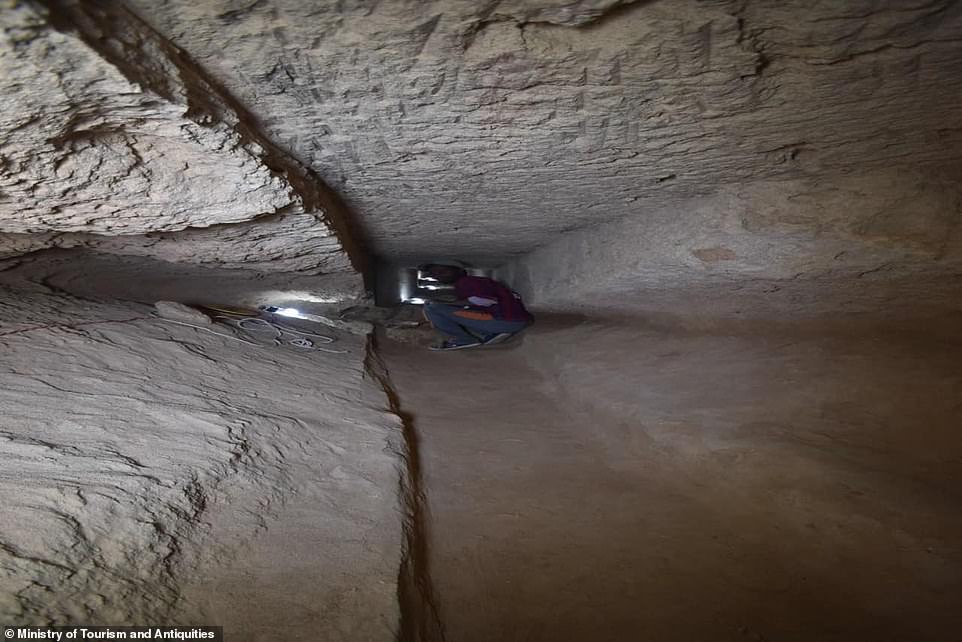 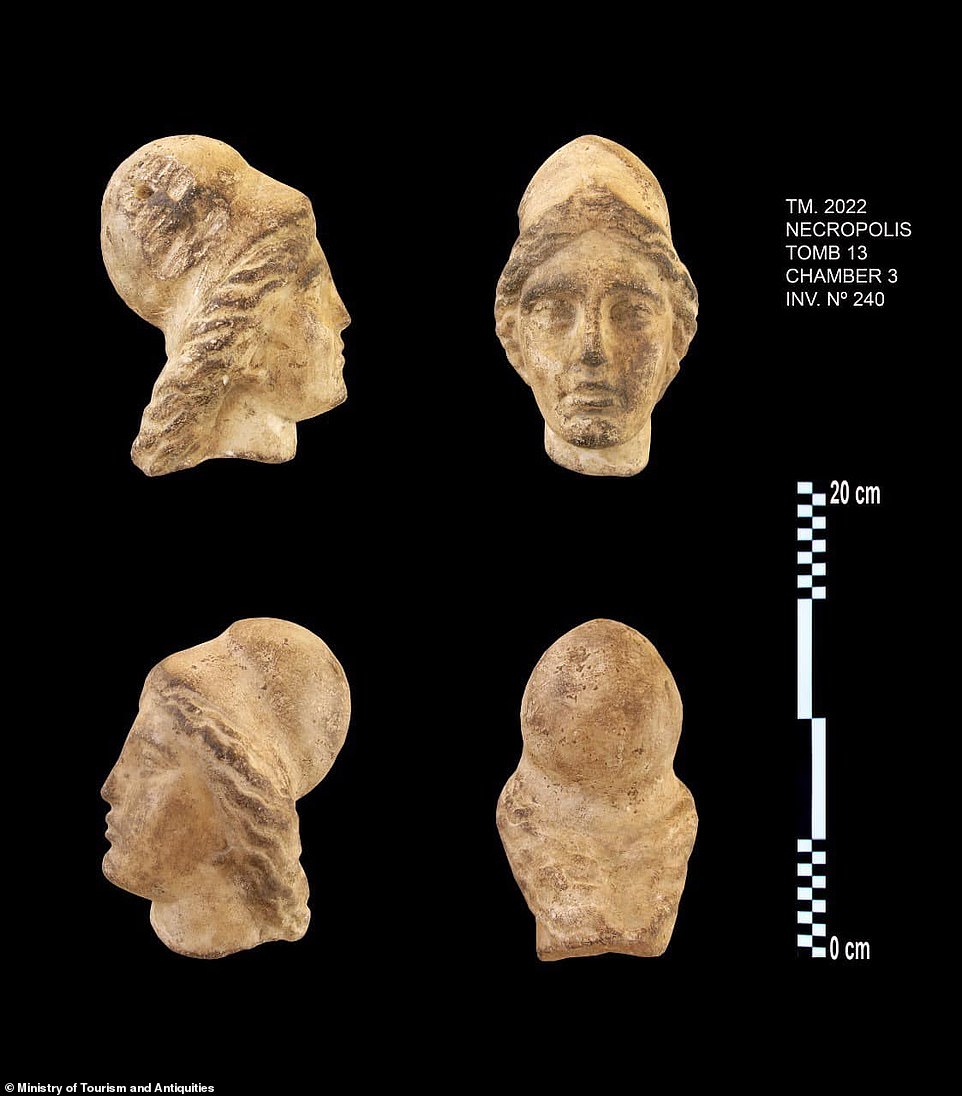 Martinez also uncovered several important artifacts inside the temple including coins bearing the images and names of both Queen Cleopatra, Alexander the Great and a number of beheaded statues, and statues of the goddess Isis (pictured) 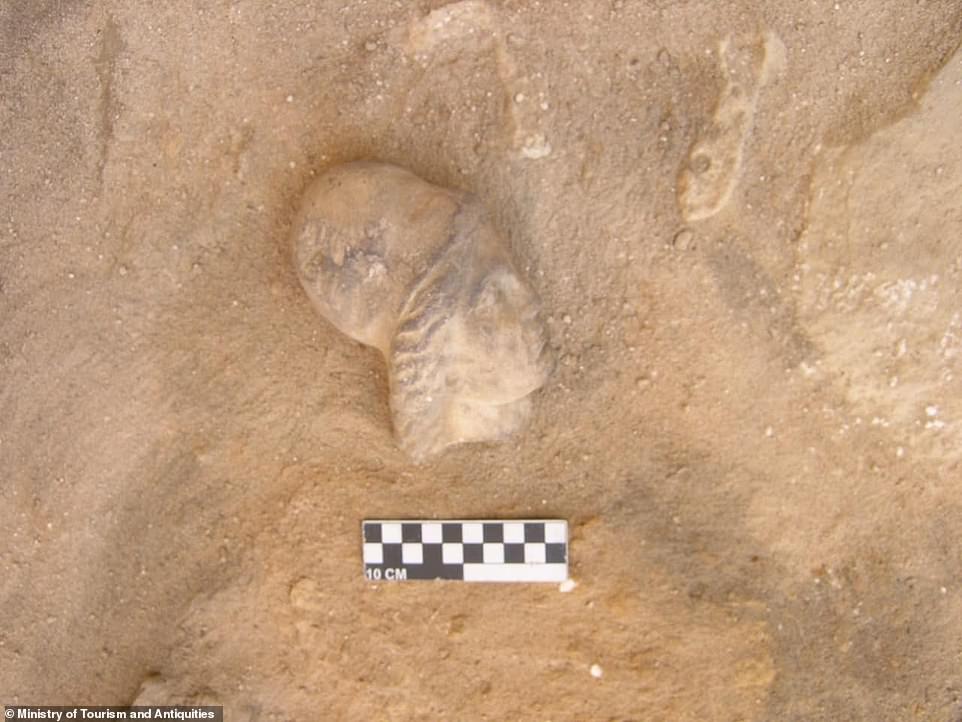 During previous excavation seasons, experts found important artifacts inside the Temple including coins bearing the images and names of both Queen Cleopatra, Alexander the Great, and a number of beheaded statues, and statues of the goddess Isis

But because Cleopatra and Antony worked hard to associate themselves with the myth of Isis and Osiris, Taposiris Magna Temple must have relevance to their life and death, others say.

According to the myth of Isis and Osiris, Osiris was killed and hacked into pieces that were scattered across Egypt.

After finding all of the pieces and making her husband whole again, Isis was able to resurrect him for a time.

Martinez believes Taposiris Magna was closely associated with the myth as the name means ‘tomb of Osiris’. It could have been one of the places where his body was scattered in the story.

ANTONY, CLEOPATRA AND THE PTOLEMAIC DYNASTY

Cleopatra, often known as the world’s first celebrity, was the last of a long line to Ptolemaic rulers of Egypt – descended from Greek general Alexander the Great.

By the time of her birth, his empire had been reduced to a shadow of its former self, while the ruling class was prone to bitter in-fighting.

Married to her brother Ptolemy XIII in her father’s will, she united with Julius Caesar against him – famously having herself smuggled to see the Roman general inside a carpet so she could strike terms with him.

After his murder in 44BC Egypt, Mark Antony was appointed to oversee the eastern reaches of the Republic – including the independent kingdom of Egypt.

Though married to Octavian’s sister, Antony formed a relationship with Cleopatra and had three children with her.

Eventually Antony and Octavian turned against one-another and fought for control of the Republic, which ended with defeat at the Battle of Actium.

Octavian chased Antony and Cleopatra back to Alexandria, where they were eventually captured.

Antony died in Cleopatra’s arms after fatally stabbing himself, before she also committed suicide – reportedly by letting an asp bite her.

Octavian returned to Italy where he became the first Emperor of Rome, while Cleopatra and Antony were buried in Egypt.

Russia and US in discussion to resume nuclear weapon reduction talks