India – the world’s third biggest polluter – has said it is a ‘victim of emissions from developed countries and other nations that are ‘historically responsible’ for greenhouse gases should pay reparations.

The country is using the COP26 climate talks to renew its push for compensation, arguing that richer nations – like the UK and United States – should pay for the devastating impacts of climate change suffered by poorer countries who have not played a ‘historical’ part in heating the planet.

India, despite being the world’s third biggest emitter of carbon dioxide behind China and the U.S., insists that they should not have to pay the bill.

Sources from the Indian delegation at the climate summit told The Independent that India was ‘aware of the importance of loss and damage’ aid, but they insisted that the nation was a ‘victim of the emissions of developed countries’.

Instead, the sources say, it should be historical emitters like the US, UK and EU nations who should pay climate reparations to climate vulnerable countries like India.

The sources said: ‘Historical cumulative emissions should be the guiding principle of further negotiations/discussions and not the current emissions levels.’ 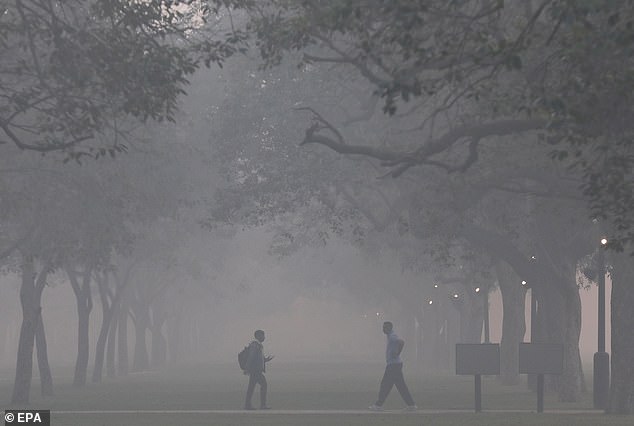 People walk as the city is engulfed in heavy smog near Rajpath, in New Delhi, India, on November 3

But small island countries, such as Antigua and Barbuda, have said that highly polluting emerging economies including India and China should pay into a climate compensation fund to help countries rebuild after climate change-driven disasters.

Antigua and Barbuda Prime Minister Gaston Browne, speaking on behalf of the Association of Small Island States (AOSIS) negotiating bloc,  said the world’s first- and third-biggest greenhouse gas emitters – though still emerging economies – have a responsibility to pay into a fund.

Delegates at the conference agreed to put the topic of loss and damage onto the formal agenda for the first time in the history of international climate negotiations.

‘We all know that the People’s Republic of China, India – they’re major polluters, and the polluter must pay,’ Browne said. ‘I don’t think that there’s any free pass for any country and I don’t say this with any acrimony.’

But Indian leaders say the nation requires billions of pounds to enable a clean energy position to phase out coal and the nation has made many of its carbon emission goals conditional on receiving this financial help.

Being both a climate vulnerable as well as a high emitting country, experts say India occupies a unique position on the global climate policy negotiating table.

About 80 per cent of India’s population live in regions highly vulnerable to extreme disasters like severe flooding or heat waves, according to a 2021 study by the climate think-tank Council on Energy, Environment and Water based in New Delhi.

Meanwhile, the nation is currently the world’s third biggest emitter of carbon dioxide behind China and the U.S., according to latest estimates.

A key issue for India at COP27 is how to finance both adapting to climate change and limiting fossil fuel emissions, according to a senior Indian government official who is involved in the negotiations.

India wants the $100 billion-a-year (£86 billion) pledge of climate funds for developing countries, a promise made in 2009 that hasn’t yet been fulfilled despite being two years past its deadline, to be assessed, according to the official. 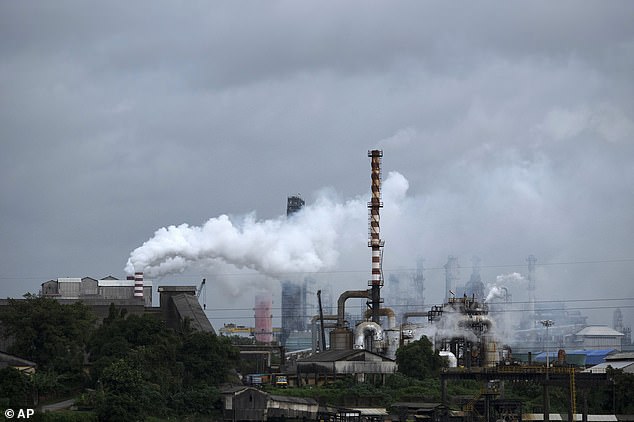 No other country will see a bigger increase in energy demand than India in the coming years, and it is estimated that the nation will need $223 billion (£197 billion) to meet its 2030 clean energy targets.

‘The investments in renewable energy, though on an upward trend, need significant scaling up. There is a funding gap. This gap needs to met by international climate public financing to attract investors in the renewable energy domain,’ said the Indian government official.

‘The raised ambitions and new goals for tackling climate change could all be in vain if adequate financial support is not provided to developing countries.’

Despite their ambitious climate plans, India is also investing more in coal, at least in the short-term. In the last two years alone, the Indian government has announced around $50 billion (£43 billion) in forthcoming public and private investment in coal.

Compensation for poor countries from rich, high-polluting nations for the destruction caused by climate change, known as ‘loss and damage’ in climate negotiations will be a key agenda item for many developing countries, including India.

According to the World Bank, 750 million people in South Asia have been affected by at least one natural disaster in the past two decades.

These disasters are expected to become more frequent and intense, potentially creating immense loss and damage in the region.

The NGO Germanwatch has ranked India seventh among countries most affected by extreme weather in 2019, noting that massive floods that year caused damage of around $10 billion (£8.5billion), claiming 1,800 lives and displacing around 1.8 million people. 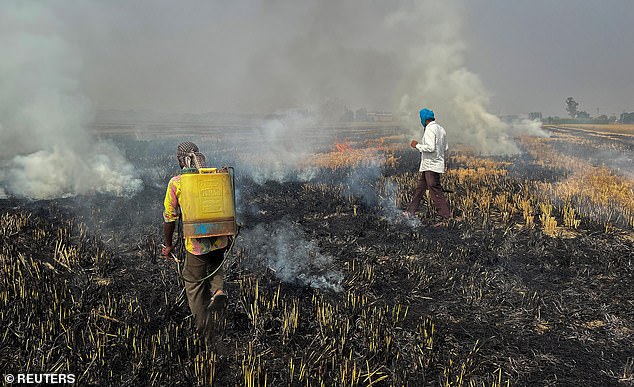 Farmers burn crop stubble in a rice field at a village in Fatehgarh Sahib district in the northern state of Punjab, India, on November 4

The situation for people in India – thanks to the nation being the third biggest pollution in the world – is poor.

The Delhi government closed primary schools and restricted outdoor activity for older students as the air quality index exceeded 470, considered ‘severe’ and more than 10 times the global safety threshold, according to the state-run Central Pollution Control Board.

The haze enveloped monuments and high-rise buildings in and around New Delhi.

India’s Environment Minister Bhupender Yadav blamed the northern Punjab state, ruled by the opposition Aam Admi Party, for its failure to stop the burning of crop residues, a key contributor to the pollution, at the start of the winter wheat-sowing season.

‘There is no doubt over who has turned Delhi into a gas chamber,’ Yadav tweeted on Wednesday.

The state’s top elected official, Bhagwant Mann, defended himself by saying that his government took office only six months ago and that the federal and state governments needed to tackle the pollution crisis together.

Sarvjeet Singh, a 48-year-old autorickshaw driver, said the smog was hurting his eyes and he was finding it difficult to breathe.

‘There are problems, especially in the morning. It’s difficult to drive my vehicle because of the pollution. My autorickshaw is open. It will affect us more than people in cars. We have to work, what can we do?’

Rahul Azmera, 29, a software engineer who works in the United States and is visiting New Delhi with his parents, said, ‘I feel like if I stay here for one month, I would be hospitalised, definitely. That would scare me a lot.’

Climate delegates were accused of hypocrisy after 400 private jets arrived in Egypt for COP27.

Posts and reports included various estimates for the number of such planes bringing delegates to the gathering in the beach resort of Sharm el-Sheikh.

Climate Action Against Disinformation, a group that analyses trends in false information on social media, said in a report on Thursday that narratives of supposed ‘hypocrisy and elitism’ were one of the main focuses of climate-sceptic messages during COP27. 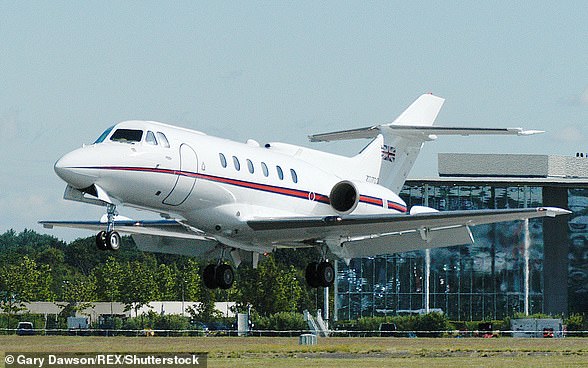 Some media cited lower estimates by flight-trackers, though there may have been private flights that were not logged by monitoring services.

One misleading post in Spanish claimed there were as many as 1,500 private jets. It was accompanied by an old photograph of planes from an aviation forum in Las Vegas.

‘More than 400 private jets landed in the past few days in Egypt,’ a source close to the Egyptian aviation authorities, who asked not to be named, told AFP on Thursday.

‘There was a meeting ahead of COP27, and officials were expecting those jets and made some arrangements in Sharm el-Sheikh airport to welcome those planes.’

On November 6, Ahmed Moussa, a talk-show host close to the Egyptian leadership, boasted on air that ‘Sharm el-Sheikh’s airport welcomed more than 300 private jets. The airport was renovated with more corridors in order to welcome the guests of COP27.’

Estimates cited in media for the number of jets used at that event varied from less than 200 to around 400.

AFP fact-checked posts from that period in various languages that showed a photograph of planes parked on a runway, claiming they were used by leaders at COP26.

Reverse-image searches revealed the image was actually taken years before and showed planes at an airport in New Orleans.

However, it was not just peddlers of false information criticising the COP27 delegates.

On November 5, hundreds of climate activists, some on bicycles, occupied an apron for private jets at Amsterdam’s Schiphol airport, calling for such planes to be banned. The protest was organised by environmental groups Greenpeace and Extinction Rebellion.

Passengers on private jets produce far more planet-warming emissions per capita than those on commercial flights. 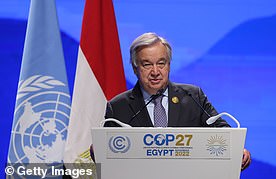 According to the European clean transport campaign group Transport and Environment, a private jet can emit two tonnes of carbon dioxide in an hour and is five to 14 times more polluting per passenger than a commercial plane.

An online emissions calculator provided by the International Civil Aviation Organization indicates that a passenger on a commercial flight in premium class would produce around half a tonne of CO2 overall during a flight from London to Sharm el-Sheikh.

There are more than 33,000 participants registered at the COP27, where delegates are holding high-level talks on scaling up finance for developing countries to green their economies and prepare for global warming impacts.

Scientists say climate change caused by humans burning fossil fuels is worsening devastating disasters including floods, heatwaves and droughts, likely to intensify in the decades to come if emissions are not cut.

‘Humanity has a choice: cooperate or perish,’ UN chief Antonio Guterres told the summit on November 7.