By Rachael Bunyan For Mailonline and Afp

Boko Haram jihadists slaughtered at least 26 women by slitting their throats after their commander accused them of being witches who caused the sudden death of his children in Nigeria.

Around 40 women were held in a village near Gwoza town in Borno State, north-eastern Nigeria, on the orders of jihadist commander Ali Guyile after his children suddenly died overnight, according to relatives and a woman who escaped.

They said the commander had accused the women of causing the children’s deaths through witchcraft.

On Thursday last week, 14 women were slaughtered in Gwoza town and a few days later, another 12 were killed by the Boko Haram jihadists.

Accusations of witchcraft are not uncommon in Nigeria, a religious conservative country almost equally divided between the mostly Muslim north and Christian south.

Around 40 women were held in a village near Gwoza town in Borno State, north-eastern Nigeria, on the orders of jihadist commander Ali Guyile whose children suddenly died overnight, according to relatives and a woman who escaped (file image of people internally displaced by Boko Haram militants)

Northeast Nigeria is at the heart of a conflict involving security forces and Boko Haram and rival Islamic State West Africa Province jihadists that has killed more than 40,000 people.

The survivors of the most recent Boko Haram attack said Guyile, a 35-year-old commander, asked his men to arrest the group of 40 women from homes known to practise witchcraft.

Talkwe Linbe, one of the accused women, said she managed to escape and fled to the regional capital Maiduguri after the killing of 14 women on Thursday.

‘He (Guyile) said he would investigate our involvement in the deaths of his children,’ she said.

‘On Thursday he ordered 14 among us to be slaughtered. I was lucky I was not among them.’

Her relationship to Boko Haram was not clear, but jihadists often force residents in territory under their influence into work or relationships. 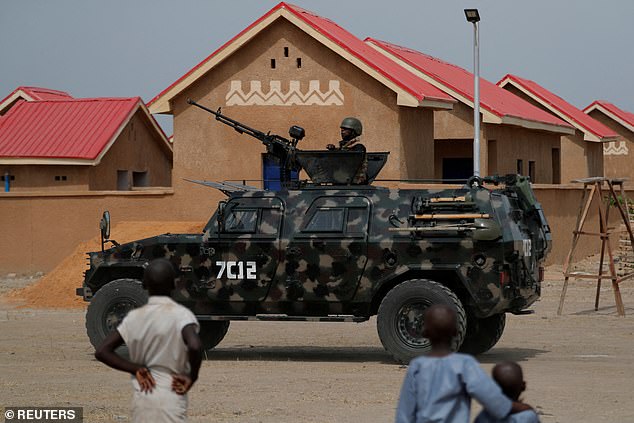 Accusations of witchcraft are not uncommon in Nigeria, a religious conservative country almost equally divided between the mostly Muslim north and Christian south (file image)

The relatives and residents AFP interviewed did not specify how the women died but the term they used in Hausa usually refers to jihadists slitting victims’ throats.

Contacted by AFP, Nigeria’s military did not respond. But security sources said they were aware of the reports and were investigating, although they stressed the village was very remote.

A Borno State government official said they were checking.

On Saturday, the day Linbe arrived in Maiduguri, 12 more women were slaughtered accused of being witches, other relatives said.

‘I received a call from Gwoza that my mother, two aunts and nine other women were slaughtered yesterday (Saturday) on the orders of Ali Guyile who accused them of being witches,’ said Abdullahi Gyya, who lives in Maiduguri.

He also said he was told of the killing of an initial 14 women on Thursday.

Tijjani Usman, who lives in Maiduguri but originates from Gwoza, said calls he received from relations in Gwoza corroborated Linbe and Gyya’s accounts.

Boko Haram seized Gwoza in July 2014. Although it was retaken by Nigerian troops the following March, the jihadists continue to raid nearby villages.