Ukraine has boasted it has the corpses of 7,000 unclaimed Russian soldiers in morgues and refrigerated cars, while the total Kremlin death toll is as high as 19,000.

Oleksiy Arestovych, adviser to the head of Ukraine’s presidential administration, said they tried to return the bodies of 3,000 troops early on in the war but Russia refused, saying it did not believe their casualties were so high.

He told the Washington Post: ‘They said, “We don’t believe in such quantities. We don’t have this number. We’re not ready to accept them.”‘

Ukraine’s Ministry of Internal Affairs has since set up a website and Telegram channel for Russians to search photos of the dead and prisoners of war.

The Kremlin has been playing down its huge death toll in the faltering war, only admitting the loss of 1,351 soldiers.

But on Thursday, Putin’s mouthpiece Dmitry Peskov finally acknowledged the heavy casualties: ‘We have significant losses of troops. And it’s a huge tragedy for us.’ 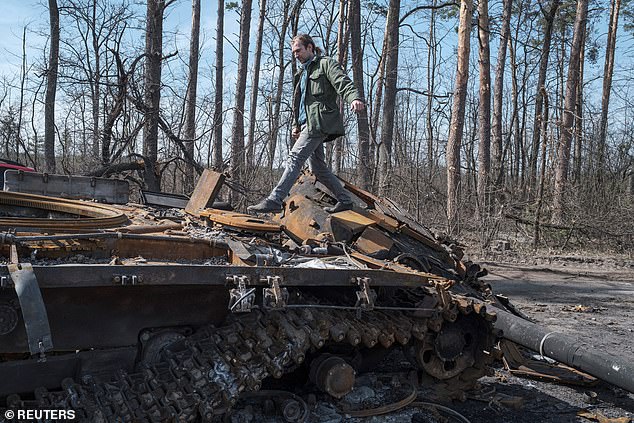 Ukraine has boasted it has the corpses of 7,000 Russian soldiers in morgues and refrigerated cars, while the total Kremlin death toll is as high as 19,000 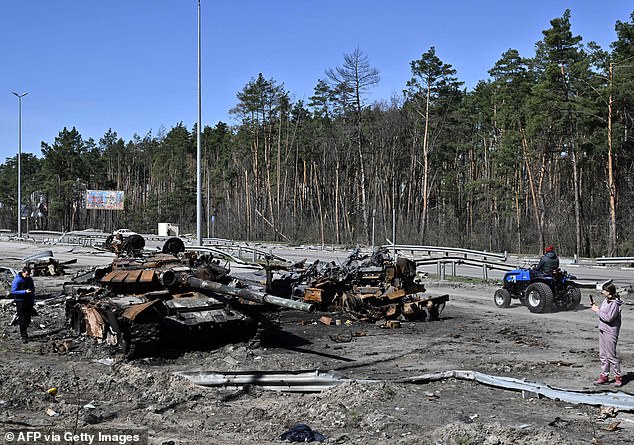 Six weeks after Russia invaded its neighbour, its troops have withdrawn from Kyiv and Ukraine’s north and are focusing on the country’s southeast

The Kremlin has a policy of playing down military casualties with a 2015 decree declaring all deaths in conflict a state secret, and last year any statement discrediting the military were criminalised.

NATO has estimated that between 7,000 and 15,000 Russian troops have been killed, while Ukraine believes the number is higher based on battlefield reports and intercepted communication.

Among the dead is Vadim Kolodiy, a 19-year-old gunner from the 136th Reconnaissance Battalion near Moscow.

He died after he was attacked while trapped in an armoured vehicle, the Russian military told his mother, although his body was never returned.

Tatyana said: ‘I am hysterical. Vadim didn’t even have a chance to escape. He burned inside.

‘The first week was like darkness. Pain, tears. I could not sleep or eat. 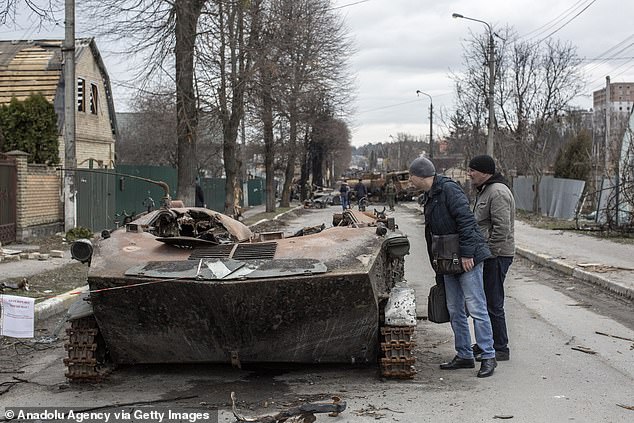 NATO has estimated that between 7,000 and 15,000 Russian troops have been killed, while Ukraine believes the number is higher

‘No one is looking for these children. No one cares about them. How many of these children, husbands, are there? How much pain had this all brought?’

Anya Deryabina, 25, from Chelyabinsk, buried the body of her sniper husband last month after he was killed in Ukraine on March 8.

She said: ‘I still can’t realise or believe that this is true. Every day I talk to him. Every day I ask him what for and why.

‘My brain refuses to accept the information that Nikitka is dead. I am still waiting for him to call, to come back.’

In a wide-ranging interview with Sky News yesterday, Peskov repeatedly refused to admit any wrongdoing on Russia’s part and described footage of war crimes committed by its soldiers as ‘fake’ and ‘lies’.

He rejected allegations of a massacre in the Ukrainian town of Bucha as ‘a well-staged insinuation’, claiming that bodies found in the streets were placed after Russian troops withdrew.

‘We are living in days of fakes and lies which we meet every day,’ he said, speaking in English by video link from Moscow. 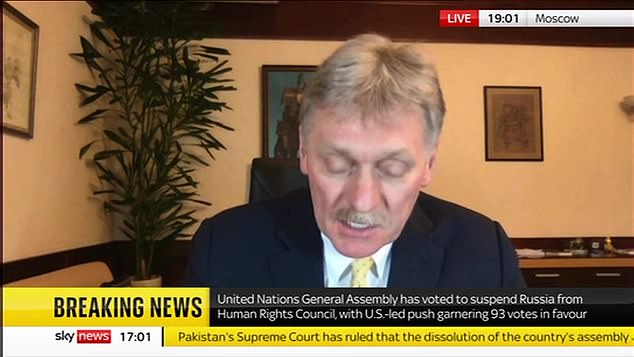 In a wide-ranging interview, Peskov repeatedly refused to admit any wrongdoing on Russia’s part and described footage of war crimes committed by its soldiers as ‘fake’ and ‘lies’

‘We deny the Russian military can have something in common with these atrocities and that dead bodies were shown on the streets of Bucha.’

Taking aim at British Prime Minister Boris Johnson, he said: ‘He’s very loud in his rhetorics from the very beginning of the operation. He’s not constructive in his attitude.

Peskov also defended the reasons for Russia’s invasion and described it as a ‘special military operation’ that was necessary because Ukraine has been an ‘anti-Russian centre’ since 2014.

He also revealed that Putin was intending to continue attempts to seize Mariupol, which has faced horrific shelling.

He said: ‘Mariupol is going to be liberated from nationalistic battalions. We hope it is going to happen sooner than later.’ 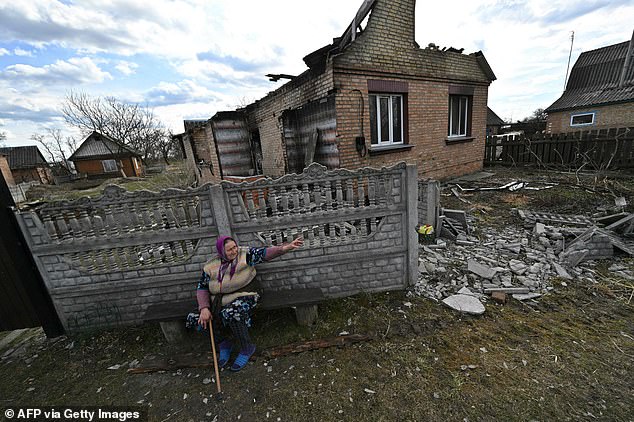 An elderly woman gestures as she sits in front of a destroyed building in the village of Obukhovychi, northern Ukraine 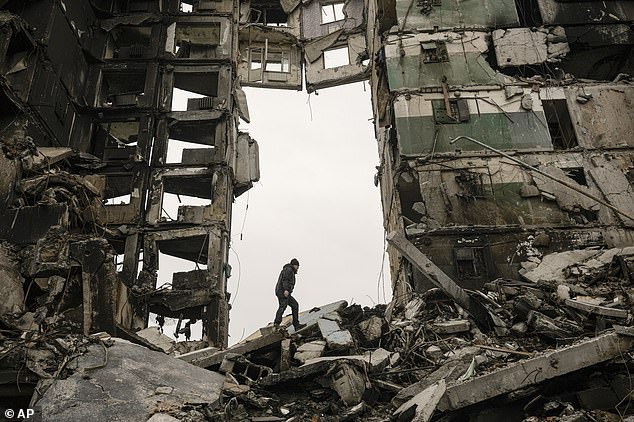 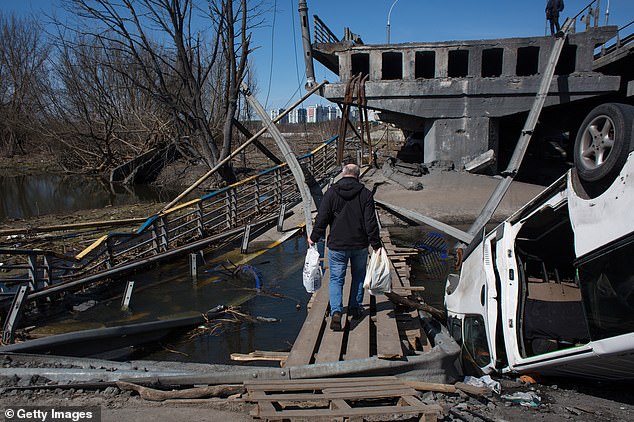 Peskov added that Mariupol is part of the ‘Luhansk people’s republic’ which Russia recognises as a separate state and claimed troops were there ‘to assist those people who were suffering for eight years from heavy shelling from Ukraine’.

Ukraine’s military general staff said on Friday that Russian forces were now focused on capturing the besieged southern port of Mariupol, fighting near the eastern city of Izyum and breakthroughs by Ukrainian forces near Donetsk.

Ukraine said it aimed to establish up to 10 humanitarian corridors on Friday, but civilians trying to flee Mariupol will have to use private vehicles.

Russia is facing its most difficult economic situation for three decades due to unprecedented Western sanctions, Prime Minister Mikhail Mishustin said. The U.S. Congress removed its ‘most favored nation’ trade status in a further blow.

Following new restrictions after the killing of civilians in the town of Bucha that were widely condemned by the West as war crimes, Ukraine called on allies to stop buying Russian oil and gas, amid divisions in Europe, and to boost it militarily.

‘Ukraine needs weapons which will give it the means to win on the battlefield and that will be the strongest possible sanction against Russia,’ President Volodymyr Zelenskiy said in a video late on Thursday. 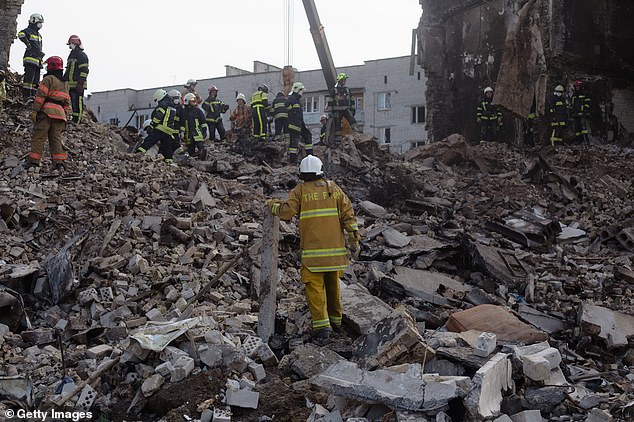 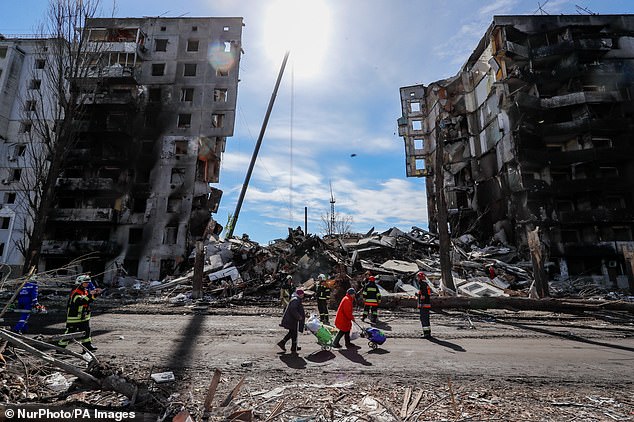 He also said the situation in Borodianka – another town northwest of Kyiv retaken from Russian forces – is ‘significantly more dreadful’ than in Bucha, without citing any evidence.

Video from Borodianka showed search and rescue teams using heavy equipment to dig through the rubble of a building that collapsed. Hundreds of people were feared buried.

Russia has denied targeting civilians and says images of bodies in Bucha were staged to justify more sanctions against it and derail peace negotiations.

The EU’s ambassadors agreed a fifth sanctions package on Russia with a coal embargo containing a 120 day wind-down period to give member states time to find alternative suppliers, following pressure from Germany to delay the measure.

Ukraine accused Hungary of undermining EU unity after Budapest said it was prepared to pay roubles for Russian gas, a Kremlin demand that most in the West had resisted.

On the battlefield, Ukraine says after withdrawing from Kyiv’s outskirts, Russia is regrouping to try to gain full control of the eastern regions of Donetsk and Luhansk, which have been partly held by Russian-backed separatists since 2014.

The besieged southern port of Mariupol, where the mayor said over 100,000 people were still trapped, was also a target.

‘Evacuate! The chances of saving yourself and your family from Russian death are dwindling every day,’ Luhansk governor Serhiy Gaidai said. 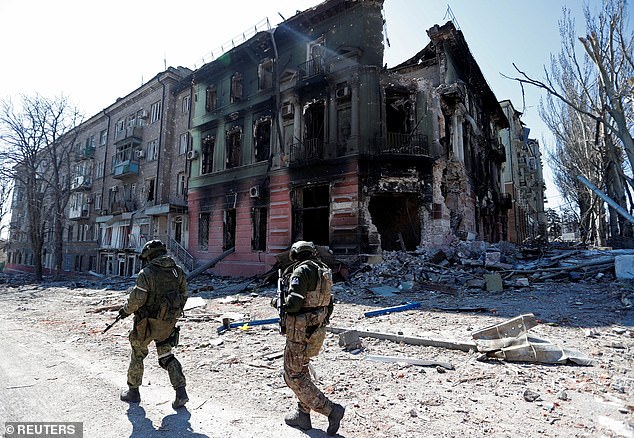 Authorities in Dnipro, a city in central-eastern Ukraine, also urged women, children and the elderly to leave.

British military intelligence said Russian forces were shelling cities in the east and south and had advanced further south from the city of Izium, which is under their control. Reuters could not immediately verify the report.

Both sides have traded accusations of abuse, with Moscow opening a criminal investigation into a Russian soldier’s allegations that he was beaten and threatened with death while being held in Ukraine as a prisoner of war.

Separately, a social media video verified by Reuters and geolocated to an area west of Kyiv appears to show Ukrainian forces shooting and killing a captured and badly wounded Russian soldier.

NATO members agreed to strengthen support to Ukraine on Thursday.

Ukraine has received about 25,000 anti-aircraft weapons systems from the United States and its allies, the top U.S. general said, and Washington is looking into what new support it could send.

Ukrainian Defence Minister Oleksii Reznikov made a plea for heavier, more modern weapons as Russia concentrated its forces for a major attack. 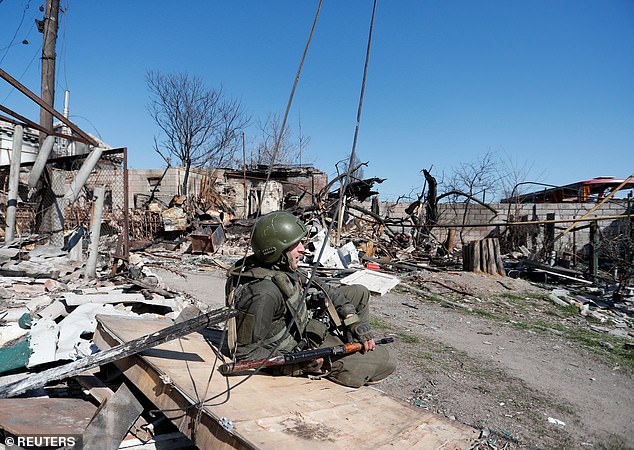 Russia has ‘drawn conclusions and changed tactics’ and is now focusing on long-range strikes from the air, he said in a video address.

Zelenskiy’s government says starving Russia’s war machine is the only way to bring it to a settlement at on-and-off peace talks.

Ukrainian negotiator Mykhailo Podolyak told Reuters Lavrov was not directly involved in negotiations and his statements were ‘of purely propagandistic significance’ aimed at diverting attention from the killings in Bucha.

Ukraine’s prosecutor general, Iryna Venediktova, said in the Kyiv region, which includes Borodianka, Bucha and other towns and villages such as Irpin, authorities had found 650 bodies, with 40 of them children.

Ukraine’s prosecutors said 169 children had been killed and 306 wounded in the invasion.

Bucha’s mayor has said dozens were the victims of extra-judicial killings carried out by Russian troops. Reuters could not independently verify those figures.

Accounts by at least a dozen residents of one apartment complex in Bucha painted a picture of violence and intimidation by Russian soldiers.

5 Things to Do Before Moving to Europe