Putin could help Iran to develop its nuclear programme, US intelligence warns, as Britain announces sanctions crackdown to discourage Tehran’s supplying of weapons to Russia for use in Ukraine

By David Averre and James Reynolds For Mailonline

Vladimir Putin could seek to help Iran develop its nuclear weapons programme in exchange for Tehran’s continued support of his war in Ukraine, US intelligence has claimed.

Weapons supplied by the Islamic republic have been used by the Russian military in the conflict – particularly Iranian-manufactured Shahed-136 drones which are playing a central role in ongoing attacks on civilian populations and key energy infrastructure.

This ‘sordid’ alliance yesterday led British foreign secretary James Cleverly to announce a sanctions package targeting ‘high-level’ figures from both countries as he condemned the embattled Iranian regime for making deals with Russia in ‘a desperate attempt to survive’.

But a former US intelligence terrorism expert on Tuesday claimed that financial payments alone may not provide enough of an incentive to Tehran to continue providing military assistance in the face of stiff sanctions.

This undated photograph released by the Ukrainian military’s Strategic Communications Directorate shows the wreckage of what Kyiv has described as an Iranian-made Shahed drone downed near Kupiansk, Ukraine 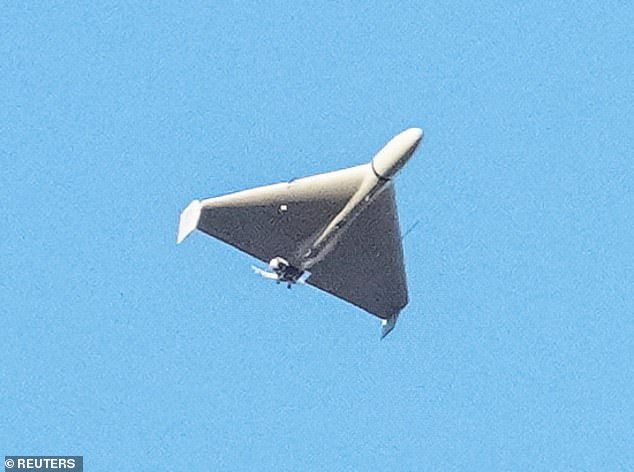 Russian drone is seen during a Russian drone strike, which local authorities consider to be Iranian made unmanned aerial vehicles (UAVs) Shahed-136

‘Both countries are subject to sweeping US and European sanctions and the extent to which Russia is able to provide Iran with hard currency payments for the drone production agreement is unclear,’ the expert wrote, according to The Mirror.

‘As an alternative Iranian leaders may seek additional Russian assistance to boost their nuclear programme.’

The warning echoes comments made by Ukrainian president Volodymyr Zelensky who in October posited that Russia, which boasts the world’s most advanced and powerful nuclear arsenal, could be offering research and components to Iran.

‘I have a question for you, how does Russia pay Iran for [military assistance], in your opinion? Is Iran just interested in money?’ Zelensky asked reporters in an Israeli news conference.

He continued: ‘Probably not money at all but Russian assistance to the Iranian nuclear programme. Probably, this is the exact meaning of their alliance.’

Iran and Russia have a complex historical relationship but today share a military and economic alliance motivated by mutual sanctions by Western nations.

Iran has been developing nuclear technology since 1957, backed at first by the American ‘Atoms for Peace’ programme which provided adopters with nuclear technology in return for a commitment to only using it for civilian purposes.

But last month, the International Atomic Energy Agency (IAEA) censured Iran over ‘insufficient cooperation’ with its investigations into traces of uranium found at undeclared sites.

IAEA Director General Rafael Grossi said there was ‘a mass of activity about which we don’t know anything’, in reference to Iran’s nuclear programme.

In 2015, Iran and several world powers signed an agreement to limit Iran’s nuclear programme in return for relief on harsh sanctions.

President Trump withdrew the United States from the agreement in 2018, though both countries have since stated intentions to recover the original deal. 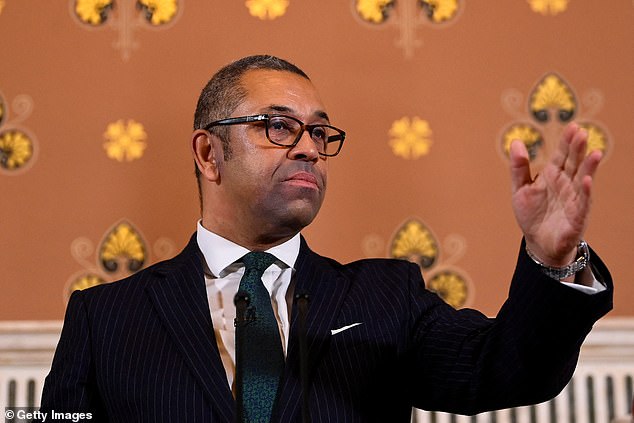 ‘The UK has just sanctioned high-level Russian and Iranian figures in response to the abhorrent strikes against civilian targets.’

Twelve senior commanders of Russian military forces, including units implicated in attacks on Ukrainian cities, were hit with asset freezes and travel bans under the new UK sanctions.

Major General Robert Baranov, identified by investigative website Bellingcat as the commander of a unit responsible for programming and targeting Russian cruise missiles, is among those affected.

The sanctions also include individuals linked to the Iranian drones used by Putin’s forces in Ukraine, including the co-owner and managing director of Mado, the company responsible for manufacturing engines for the unmanned aerial vehicles.

Mr Cleverly said: ‘The UK stands with Ukraine. Russian forces’ calculated attacks on cities and innocent civilians in Ukraine will not go unanswered.’

He said the Tehran government was ‘increasingly isolated in the face of deafening calls for change from its own people’ and was making deals with Russia as ‘a desperate attempt to survive’.