Vladimir Putin has been offered surrender terms by the West, a respected Russian policy expert said today, as Moscow’s troops were forced to withdraw from the city of Kherson in yet another humiliating defeat.

Professor Valery Solovey, formerly at Moscow’s prestigious Institute of International Relations and who claims to have connections in the Kremlin, said the surrender would see Russia give up all territory in Ukraine with the exception of Crimea which would become a demilitarized zone and its status not discussed again until 2029.

In return, Putin and his cronies would avoid criminal charges over the war and be allowed to remain in power, Solovey claimed. He said the proposal had been discussed between Kyiv and its Western allies before being presented to Putin’s inner circle – who had reacted positively to the idea.

Russia has been calling for a return to the negotiating table in recent days while there have been suggestions that Washington is quietly leaning on Kyiv to do the same. General Mark Milley, head of the US general staff, said this week that a winter lull in fighting presents and ‘opportunity’ for talks.

President Zelensky has previously vowed never to negotiate with Russia so long as Putin remained in power.

The news emerged as Ukraine today liberated Kherson after eight months of Russian occupation, with troops greeted as heroes after the last of Putin’s forces fled. Weeping locals sang, danced, hugged, kissed and chanted victory slogans as Kyiv’s soldiers arrived to take back the city. 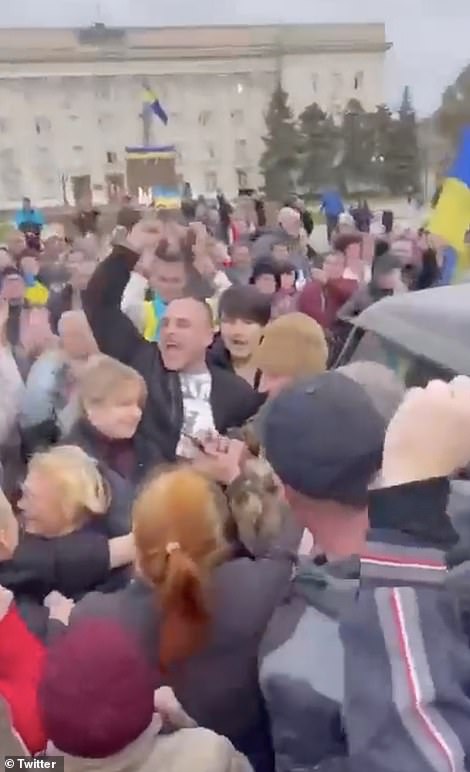 Ukrainian civilians cheer, chant, cry and kiss as they welcome troops to the centre of Kherson, with Kyiv’s military intelligence saying the city is now under their full control 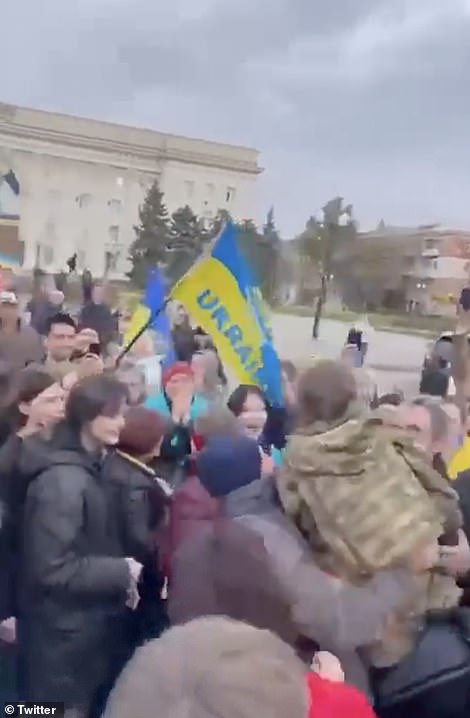 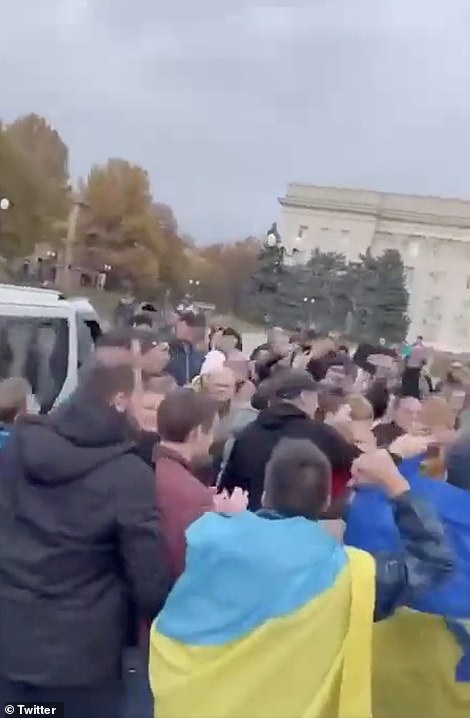 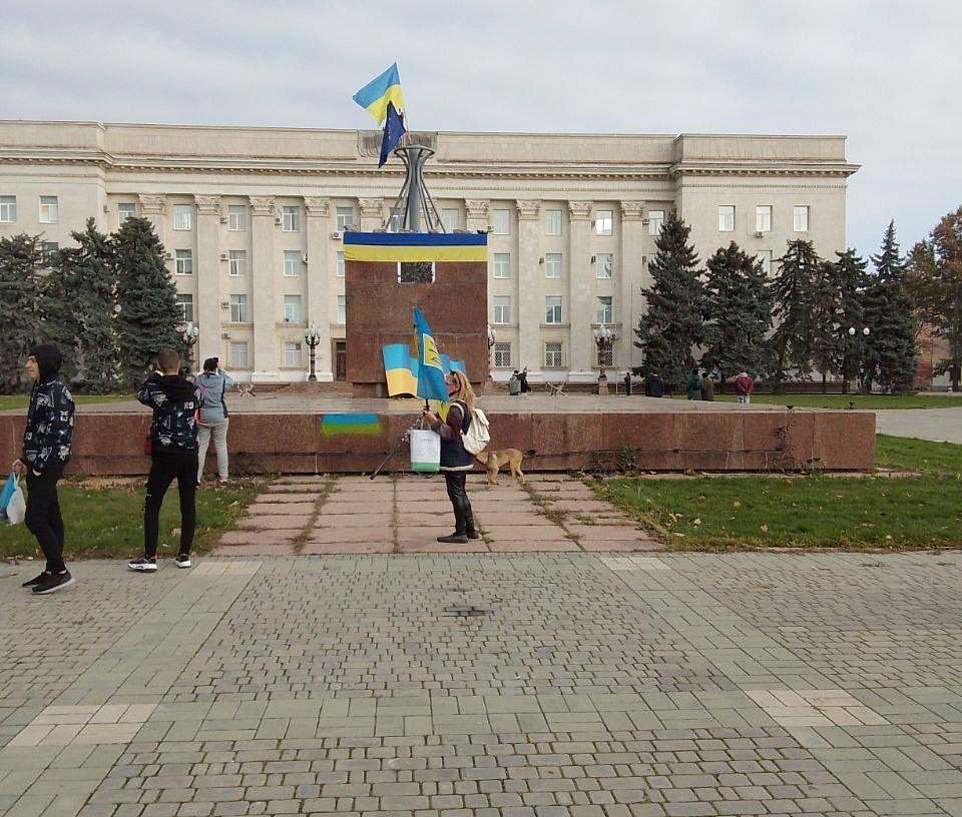 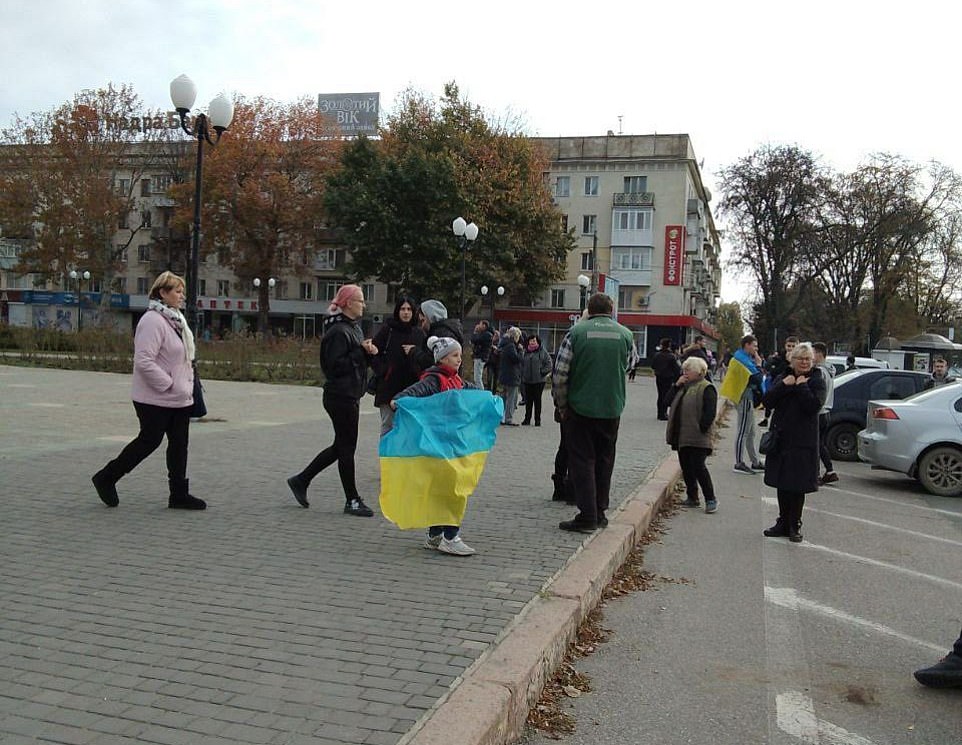 A young girl carrying the national banner was pictured in the centre of Kherson, as Russia left the city eight months after capturing it during the early weeks of the war 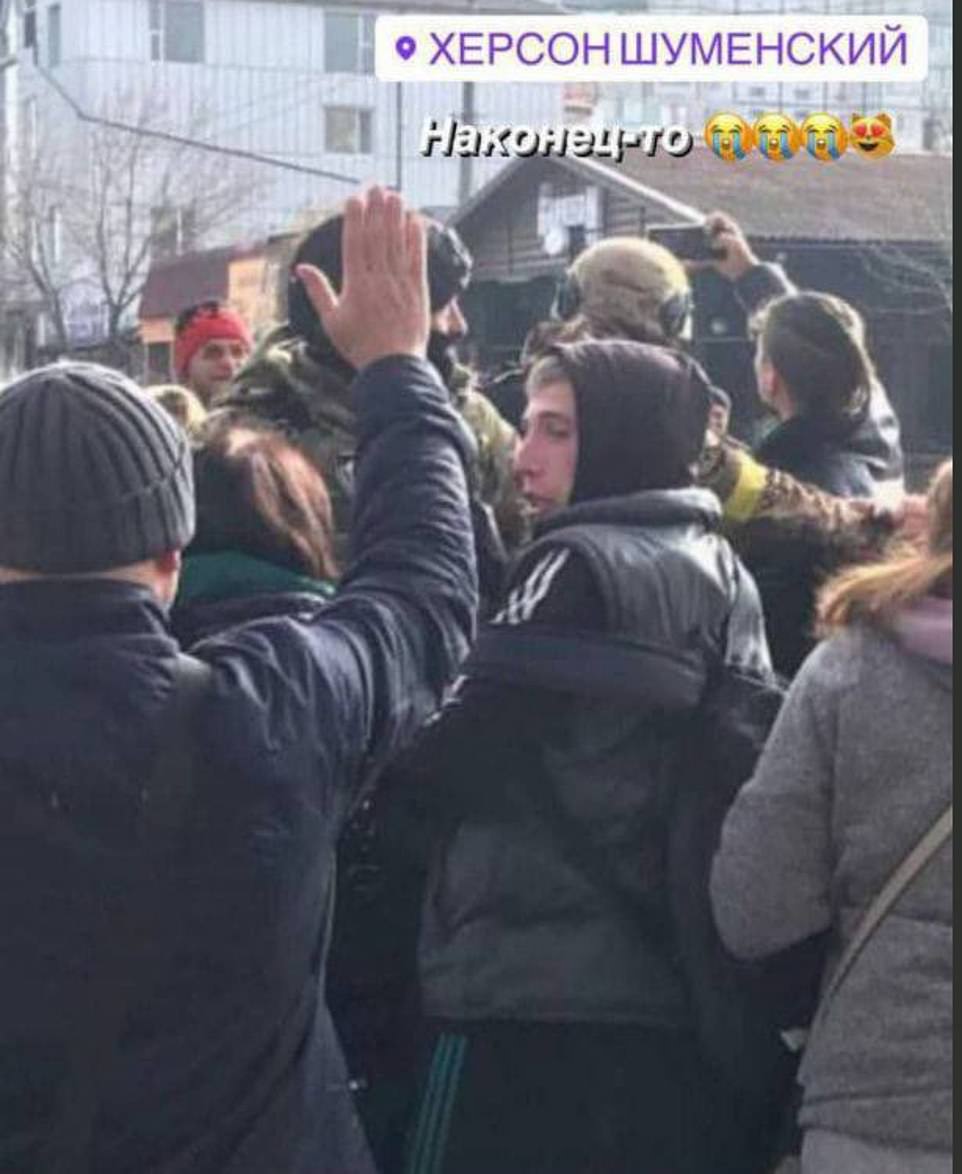 Ukrainian troops were pictured in the outskirts of the city being greeted by jubilant locals, as officials said the entire city is almost under Kyiv’s control 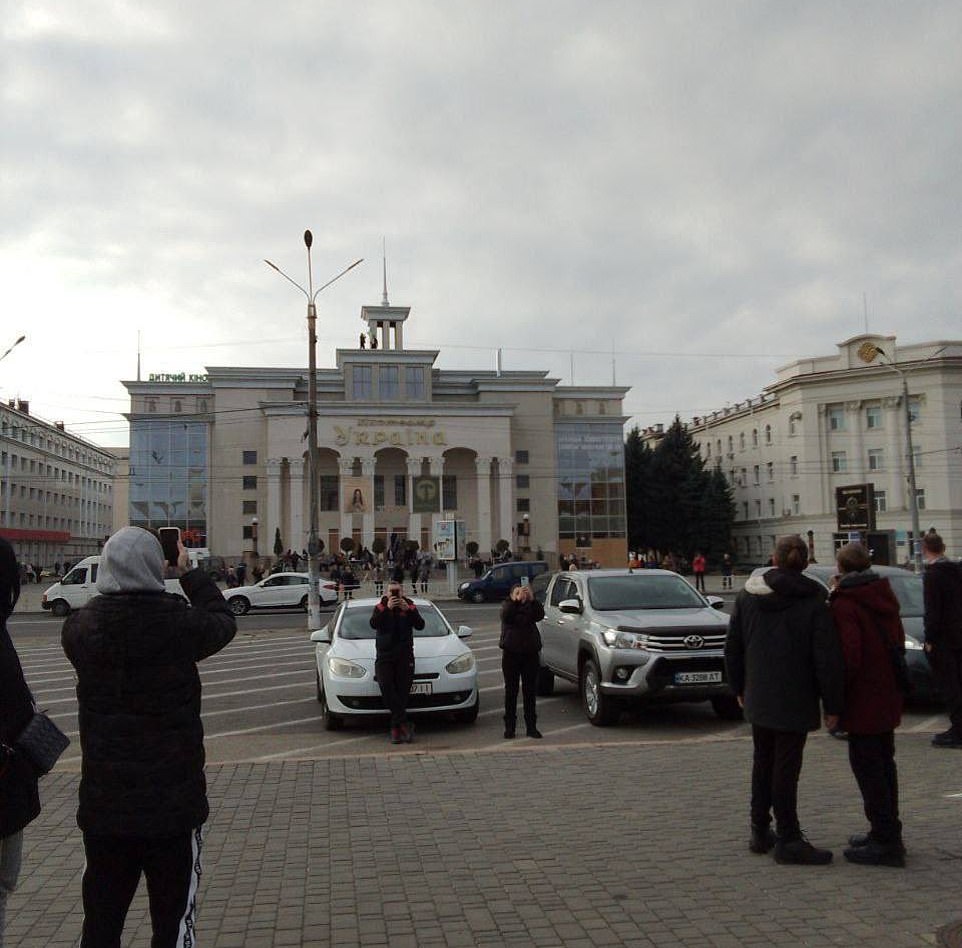 Solovey said the exact terms of the deal would mean Russia giving up any claim to the rest of the Kherson region, along with Zaporizhzhia, Donetsk and Luhansk – including areas occupied since 2014. Crimea would remain a part of Russia but would be forced to demilitarize, with the Black Sea Fleet relocated.

A 60mile-wide demilitarized zone would be created along the borders between Belarus, Russia and Ukraine with no heavy weapons allowed inside the zone. Russia would also have to give up its military presence in the Transnistria region of Moldova, while Ukraine would pledge not to join NATO for at least seven years.

‘If the president declines these conditions which the Russian establishment is ready to accept… then military actions continue,’ said Solovey.

‘If massive rocket attacks on Ukraine’s critical infrastructure, first of all, power stations, resume, this means that the president does not accept these conditions,’ he said.

‘If there is no bombing, it does not necessarily mean readiness to accept [the offer to surrender]. It means that the contemplation continues, and an attempt is being made to get some extra time to assess the situation.’

News of a potential Russian surrender comes as Putin’s army faces a dire situation on the battlefields of Ukraine.

Having been forced to retreat from Kyiv and Kharkiv, Russia’s troops today withdrew from Kherson in the south: The only regional capital gained since the start of the war and capital of a region Putin declared to be part of Russia just a few weeks ago.

Moscow’s troops are struggling to make any progress in Donbas despite heavy fighting in recent weeks, with the frontline having remained largely static since late July. Russia did attempt a major attack near a town called Pavlivka, in Donetsk, last week but it ended in disaster amid reports of more than 300 marines killed.

Meanwhile Ukraine continues advancing in northern Luhansk where it is now bearing down on the cities of Svatove and Kreminna – strategic waypoints on the way to Severodonetsk and Lysychansk, two cities that Russia spent huge amount of time, effort and blood capturing over the summer.

Losing Kherson means any Russian assault on Odesa is now all-but impossible. It also means that Ukraine can now strike parts of Crimea – the crown jewel of his last invasion, in 2014 – with long-range artillery. Kyiv has already said it plans to take the peninsula back.

Russia is now thought to have taken up defensive positions on the eastern bank of the Dnipro comprising three lines made up of trenches and canals, covered by artillery and backed by reinforcements from Crimea. 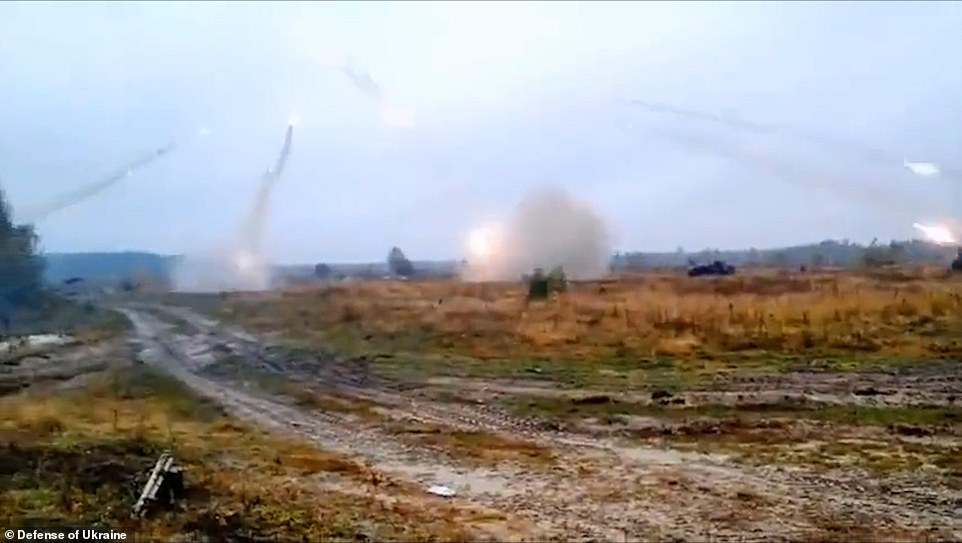 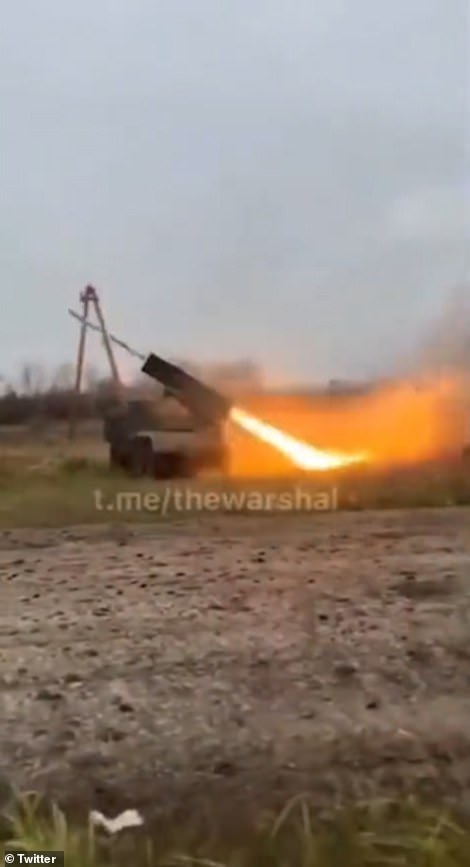 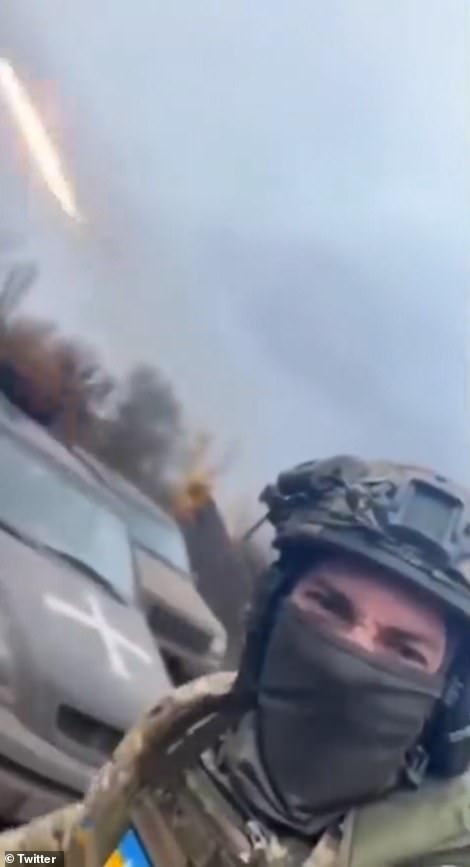 Russia is facing potentially ‘huge losses’ in Kherson, an expert has warned, with up to 20,000 men surrounded while Ukraine shells the city heavily (left and right) and advances along multiple routes 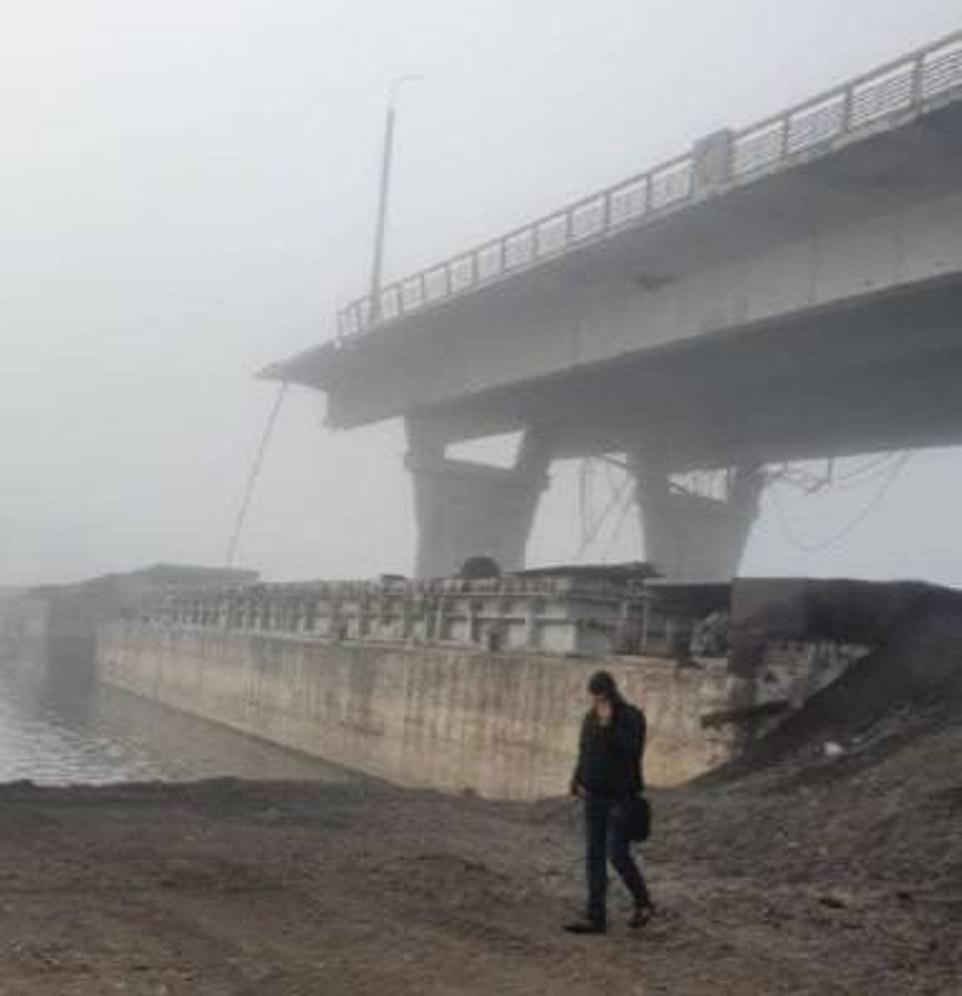 The Antonovskiy Bridge, which is the main route out of Kherson, appears to have been completely destroyed overnight 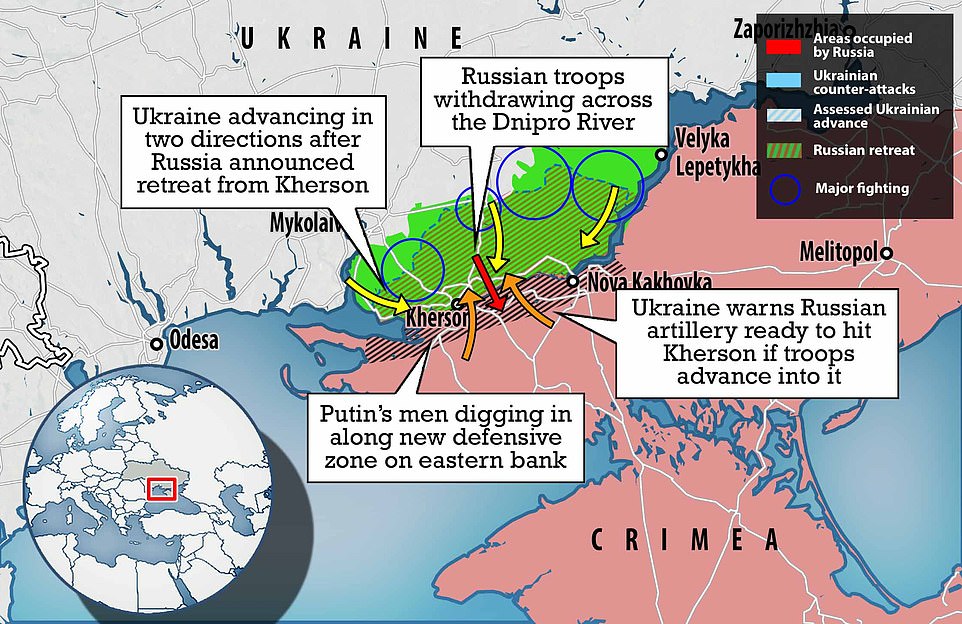 Ukraine had warned that Russia could be laying a trap for its forces in Kherson, but pressed ahead rapidly with an attack overnight and is now thought to have all-but surrounded the city

Western officials briefing journalists last week said they do not expect Ukraine to begin an offensive across the Dnipro any time soon.

‘This is a subject of the Russian Federation. There are no changes in this and there cannot be changes,’ Peskov said, insisting that Putin had ‘no regrets’ about annexing it.

However, Western military and diplomatic sources cautioned that the Russian military move did not mean all was said and done – even if it were a major victory for Ukraine.

‘It’s definitely a turning point, but it doesn’t mean that Russia has lost or that Ukraine has won,’ said Ben Barry, a senior fellow for land warfare at the International Institute for Strategic Studies in London. ‘Russia was still capable of a new offensive or counterattacks. It is far too soon to write them off,’ Barry said.

Ukrainian forces have liberated 41 settlements as they advanced through the south, President Volodymyr Zelenskiy said in his Thursday evening video address.

Sappers and pyrotechnicians were going into areas retaken from Russian forces to rid them of thousands of unexploded landmines and ordnance they left behind, he said.

About 170,000 square kilometres (66,000 square miles) remained to be de-mined, Zelenskiy said, including in places where there was still fighting and ‘where the enemy will add landmines before its withdrawal, as is the case now with Kherson.’

The region’s Ukrainian-appointed governor, Yaroslav Yanushevych, writing on the Telegram messaging app, said Russian troops had ‘taken away public equipment, damaged power lines and wanted to leave a trap behind them’.

Mykhailo Podolyak, an adviser to Zelenskiy, said Russia wanted to turn Kherson into a ‘city of death’, mining everything from apartments to sewers and planning to shell the city from the other side of the river.

A small group of Ukrainian soldiers was shown on Ukraine’s state TV being greeted by joyous residents in the centre of the village of Snihurivka, around 55 km (35 miles) north of Kherson city, with a Ukrainian flag fluttering above the square behind them. Reuters verified the location of the video. 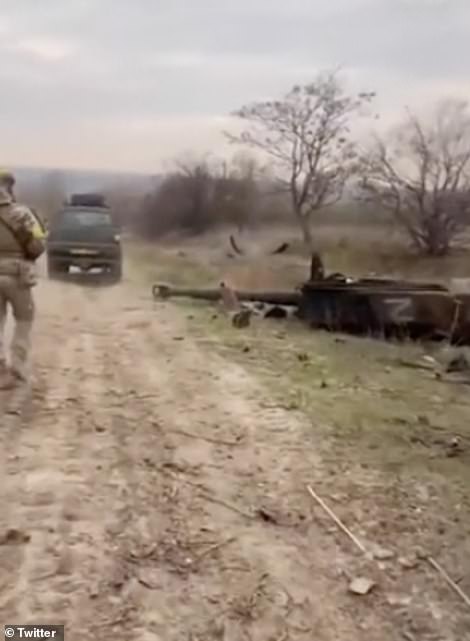 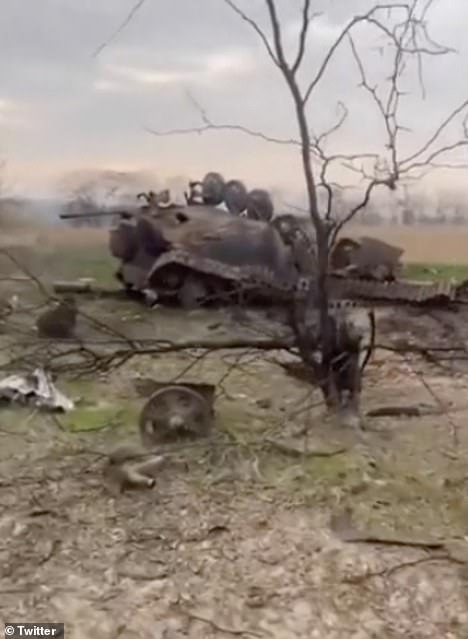 Ukrainian troops have begun advancing into the area around Kherson city evacuated by Russia mid fears Moscow’s men may be laying a trap for them, uncovering destroyed vehicles along their way (left and right) 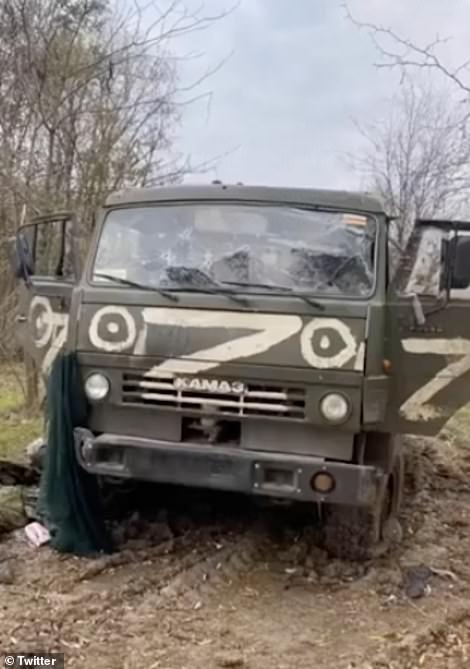 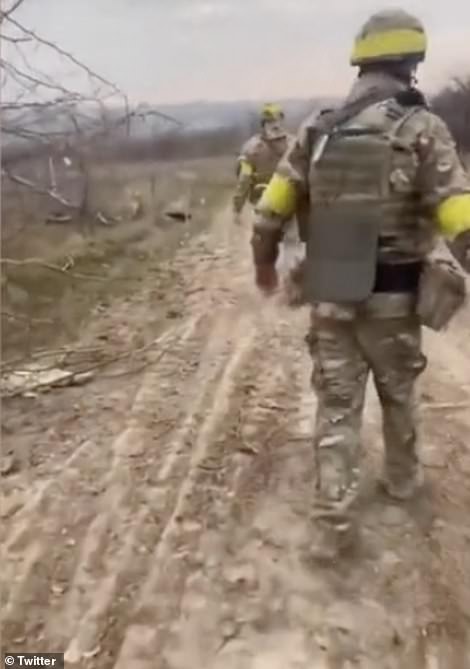 A Russian military vehicle painted with war symbols is seen (left) as Ukrainian troops advance into areas previously held by Moscow’s troops, as they appear to withdraw from the region 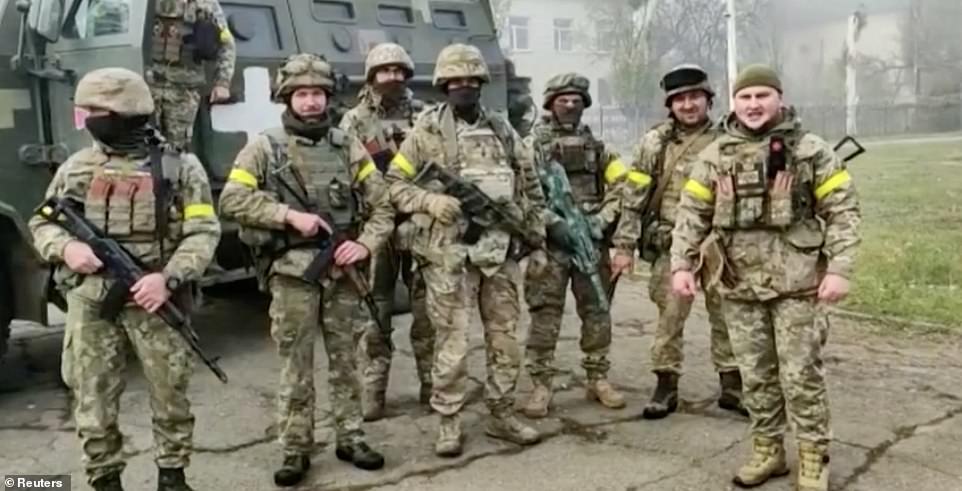 Kyiv’s men are shown liberating the village of Snihurivka, around 30 miles north of Kherson, today after Russian forces began retreating from their positions back across the Dnipro River 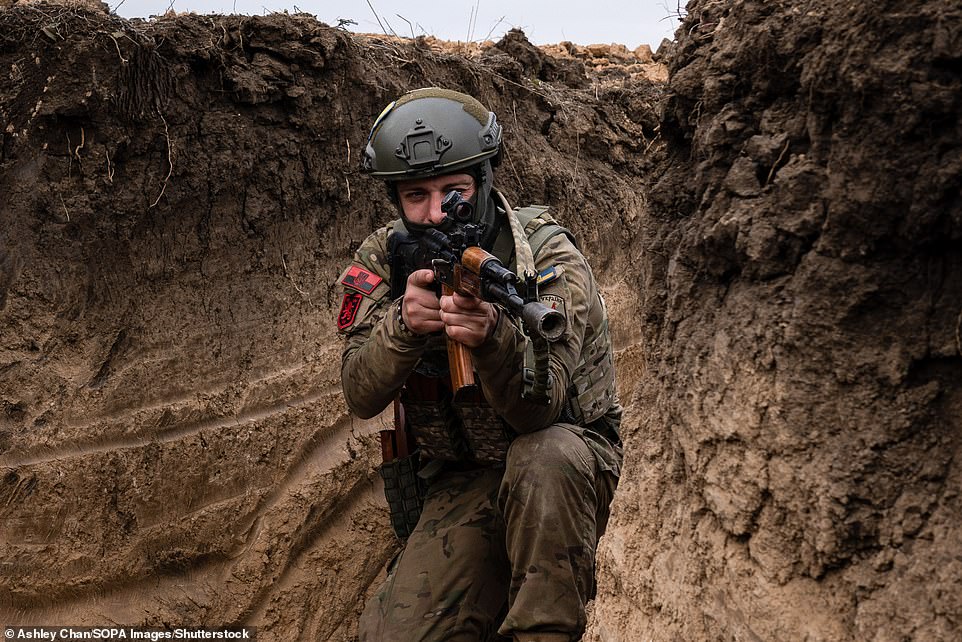 A Ukrainian soldier based in Kherson takes part in a training exercise as Kyiv’s men get ready to advance into the region that Russia has said it is evacuating, amid fears the ‘retreat’ is actually a trap 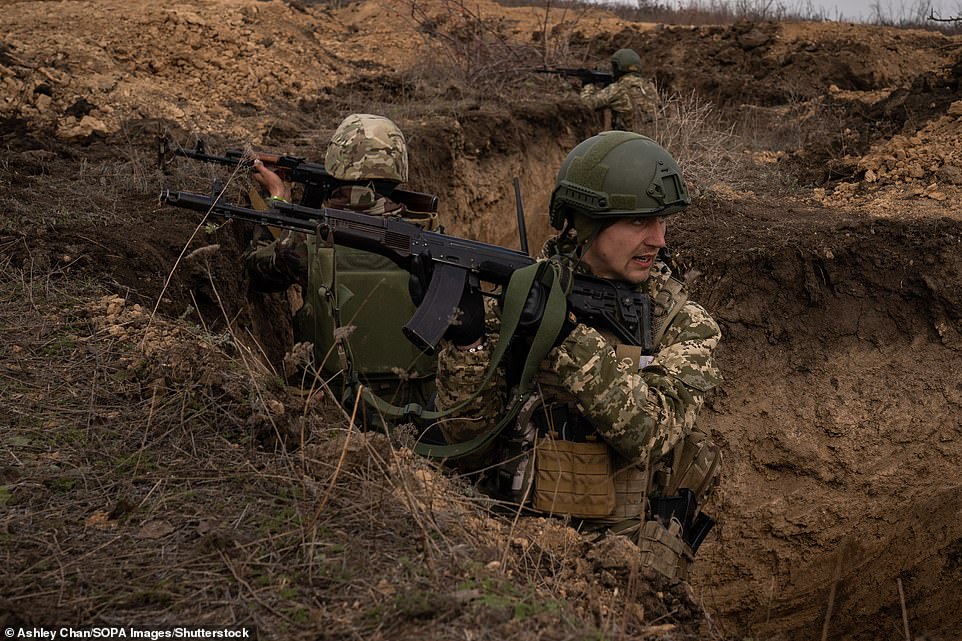 Ukrainian soldiers from the 63 brigade train for trench warfare in the northern Kherson region, as they prepare to advance towards the regional capital in the south after Russia said it was evacuating 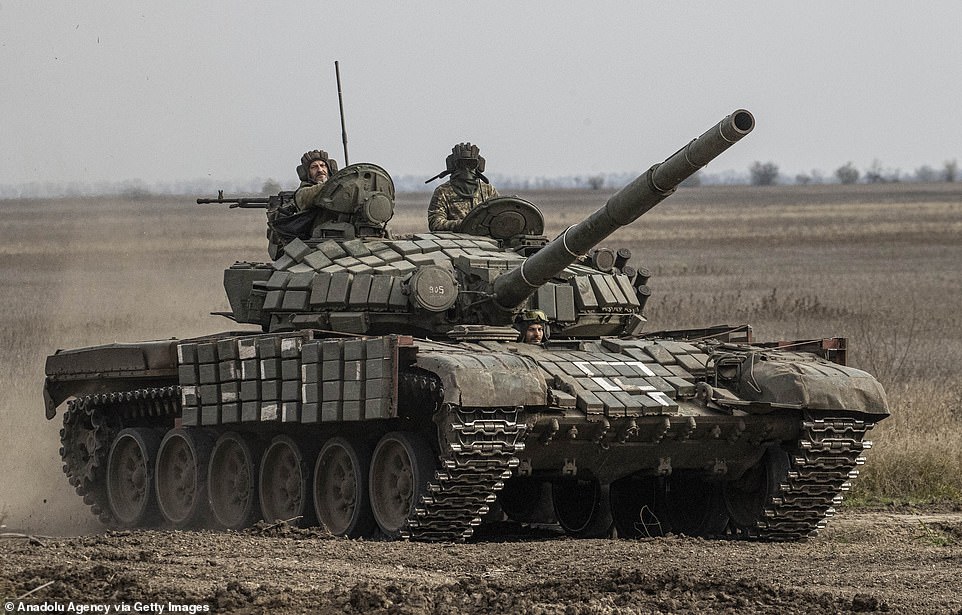 A Ukrainian tank advances towards the front line in Kherson after Russian commanders said they would be withdrawing, giving up the only regional capital they have taken since the February invasion 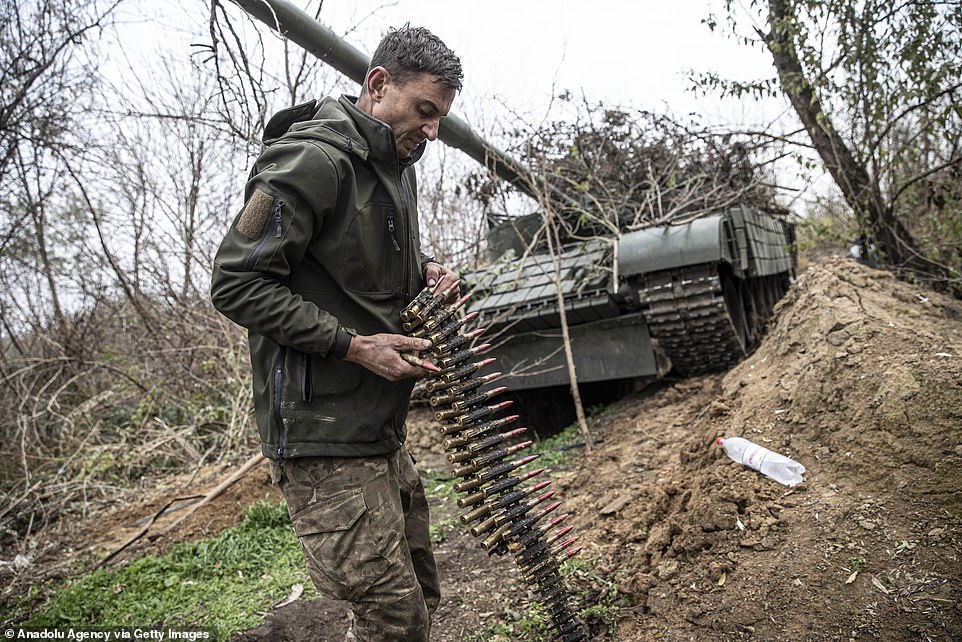 A few kilometres away, in a devastated frontline village reached by Reuters in an area already held by Ukrainian forces, the guns had fallen silent for what residents said was the first quiet night since the war began.

‘We hope the silence means the Russians are leaving,’ said Nadiia Nizarenko, 85. The Russians could be preparing a trap, said Nizarenko’s daughter, Svitlana Lischeniuk, 63.

Still, there was joy. Petro Lupan, a volunteer distributing bread to residents, said he could not find words to express his feelings after he learned of the recapture of Snihurivka.

If Russia implements its withdrawal from an area that President Vladimir Putin proclaimed annexed a month ago, it would be its biggest retreat since its forces were driven back from the outskirts of Kyiv in March and a clear shift in the momentum of the nine-month-old war.

In the southeastern city of Zaporizhzhia, 54-year-old Larysa, who had recently fled Kherson to reach Ukrainian-held territory, said she could not reach family in the area.

‘We tried contacting them … but there was no connection. We don’t even know … the fate of our relatives.’

‘We’ve lived in the occupied territories for eight months. The situation there is difficult, especially psychologically. Our village is full of armed Russian soldiers … It is a miracle that we got out … There were tears of happiness when I saw our Ukrainian flag and our soldiers.’

Russian state media and pro-Kremlin war hawks defended the withdrawal from Kherson as a necessary move while acknowledging a heavy blow.

The retreat would leave Moscow with only limited gains to show for a ‘special military operation’ that made it a pariah in the West and, according to a U.S. estimate, has killed or wounded some 100,000 Russian soldiers.

Facing losses on the battlefield, Moscow has opened up the possibility of peace negotiations with Kyiv – something the US is said to be quietly pressing for behind the scenes.

American diplomats were said to view the expected slow-down of fighting between the two sides over winter as an opportunity to open up discussions, NBC reported yesterday. 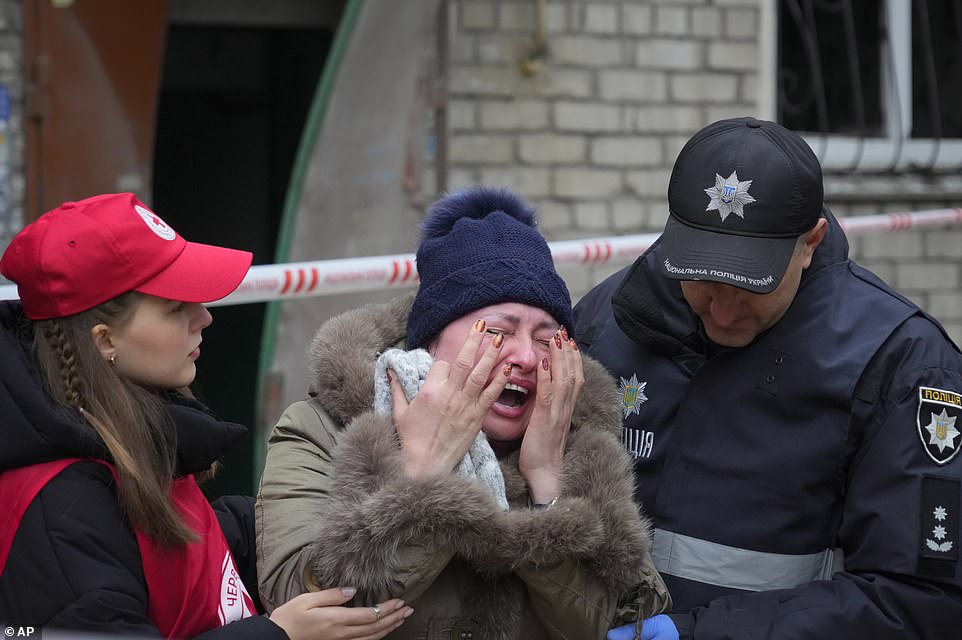 A woman is comforted by servicemen as she cries at the scene of night shelling in Mykolaiv, Ukraine 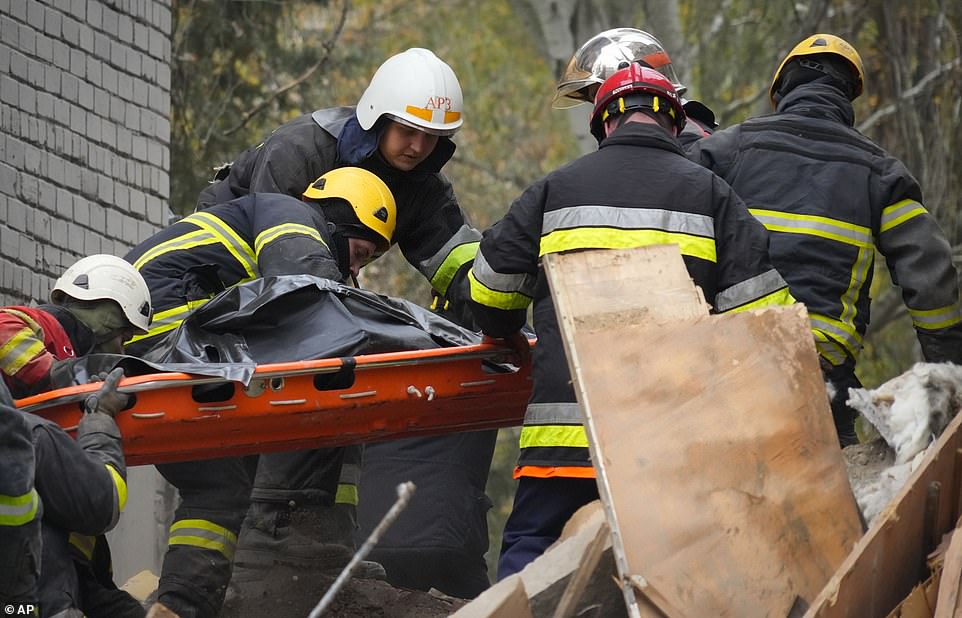 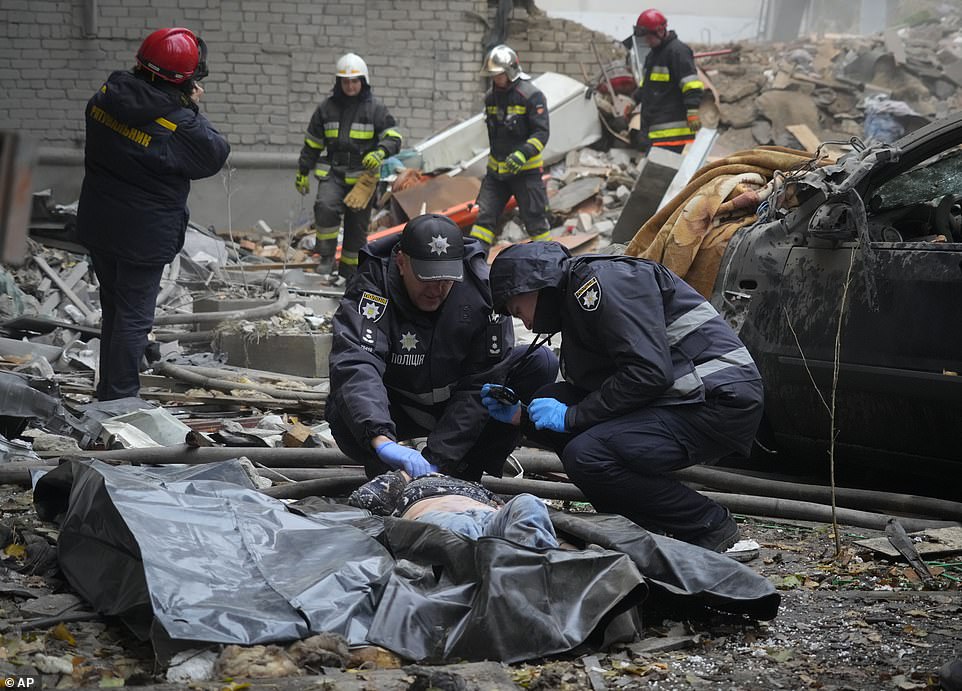 Police inspect a dead body at the scene of night shelling in Mykolaiv, 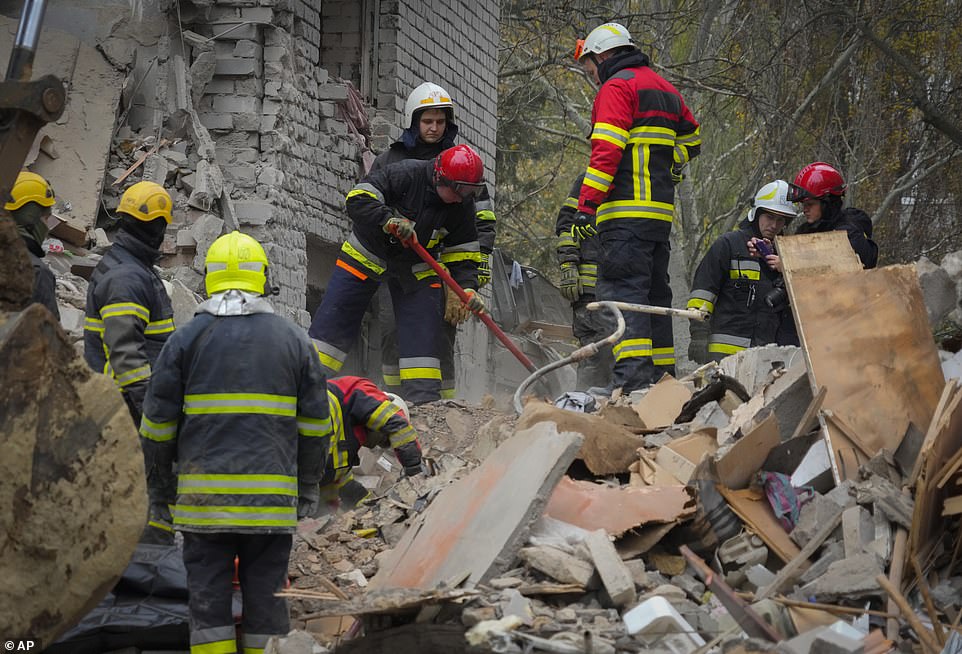 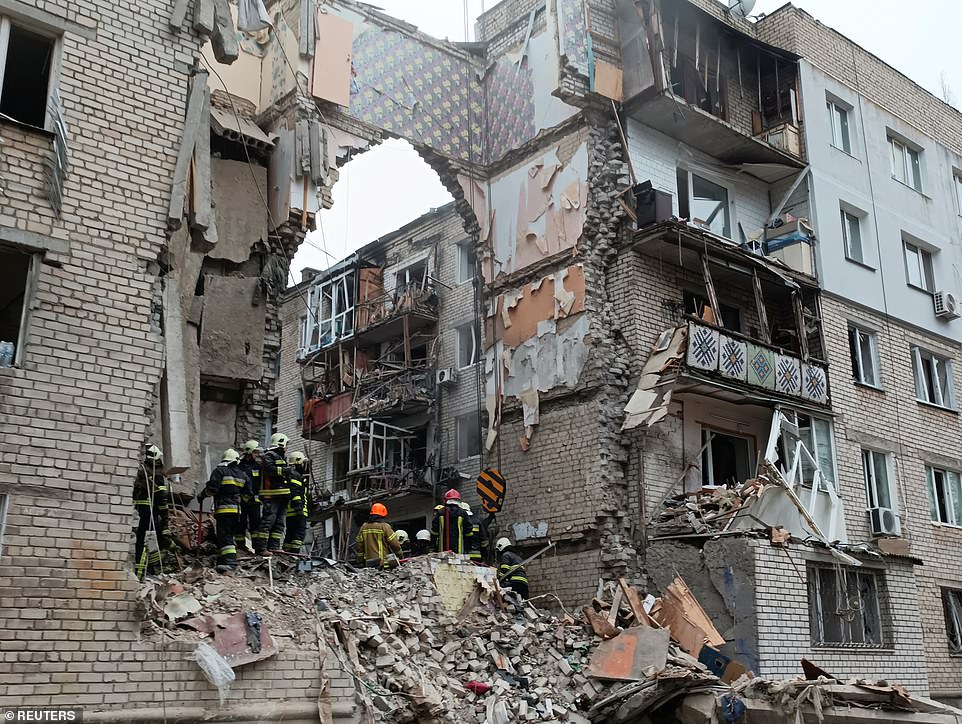 General Mark Milley, chief of the generals staff, backed the idea – saying winter will provide ‘a window of opportunity for negotiation’ provided both sides can agree that victory is not possible by military means.

However, a conflicting report in the New York Times said that European officials were briefing that serious negotiations between the two sides are ‘unlikely in the near future.’

President Zelensky, speaking last night, said the onus is on the Russian side to prove they are genuine about negotiations and he sees ‘no desire’ in Putin to end the fighting.

‘When Russia truly wants peace, we will definitely feel it and see it,’ he said.

‘But you can’t wish for peace with words alone – words are not enough. Stop the war, withdraw from our territory, stop killing people, start reimbursing the damages inflicted on our country. Criminals must be prosecuted. Words are not enough.’

Zelensky said after the annexation of four partially occupied regions of Ukraine to Russia that he will never negotiate with Putin, and will instead hold talks with ‘the next Russian leader’.

He reiterated that determination last night, saying that Putin has done nothing but issue ultimatums to Ukraine since the start of the war – and shows no sign of changing his stance.