Rattled Kremlin propagandists have called for nuclear strikes on the West after the US and Germany agreed to give Ukraine dozens of modern tanks in a major boost for Kyiv.

Russia branded the move a ‘blatant provocation’ and warned the new Nato supplies will ‘burn like all the rest’, while one raging Putin mouthpiece called for the German parliament to be destroyed.

Around 30 M1 Abrams tanks will be sent from the US, while Berlin will initially supply 14 Leopard 2 tanks and permit other Nato nations to send their own. Russian storage facilities have around 10,200 tanks, while an estimated 3,300 have been deployed in Ukraine, with 1,640 destroyed.

Volodymyr Zelensky’s officials hailed the move as a ‘punching fist’ for democracy, while Russia had warned it would cause a ‘global catastrophe’ and escalate the war beyond Ukraine’s borders.

Russia had warned the supply of more tanks would ‘leave a lasting mark’ and lead to ‘nothing good’, with fears in Moscow that the hi-tech equipment could land a devastating blow on the invading forces.

Pressure has been building for weeks on German Chancellor Olaf Scholz’s government to send the tanks and allow other NATO allies to do the same, wary of wary of moves that could prompt Russia to escalate but he finally relented today.

‘This decision follows our well-known line of supporting Ukraine to the best of our ability. We are acting in a closely coordinated manner internationally,’ Scholz said in a statement.

Training of Ukrainian troops in Germany will begin soon, and Germany will also provide logistics and ammunition, it said. Germany will issue the appropriate transfer permits to partner countries that want to quickly deliver Leopard 2 tanks from their stocks to Ukraine, it said.

In response, Kremlin spokesman Dmitry Peskov said: ‘I am certain that many experts understand the absurdity of this idea. The plan is disastrous in terms of technology,’ he said.

‘But above all, it overestimates the potential it will add to the Ukrainian army. These tanks burn just like all the others.’

Putin propagandist Yevgeny Satanovsky, president of the Moscow Institute of the Middle East, told Waldman-LINE channel that nuclear tipped missiles should be used on the centre of German democracy.

He said: ‘German tanks with crosses on their armour will again march across Ukraine attacking Russian soldiers.

‘I have a natural reaction to this – the Soviet Union bombed Berlin in 1941.

‘Flat, slightly radioactive, melted-down ground [will remain in its place].’

Meanwhile Putin’s favourite propagandist Vladimir Solovyov also ranted over the tank move which he plainly sees as a significant blow to Putin while also being proof in Russian eyes that Germany has directly joined the war. 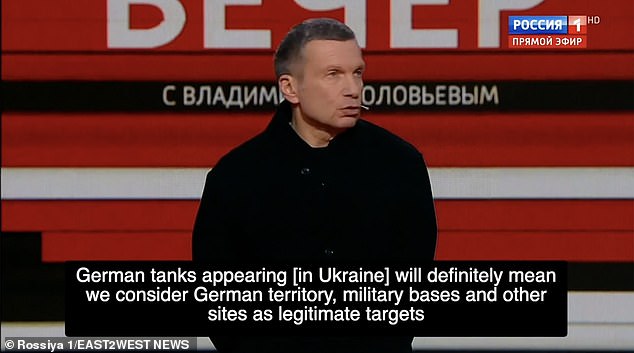 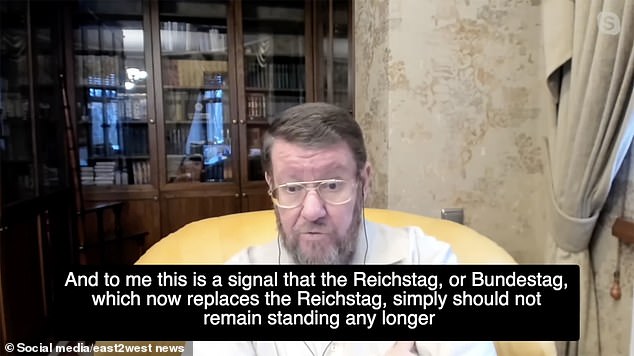 Putin propagandist Yevgeny Satanovsky, president of the Moscow Institute of the Middle East, said nuclear tipped missiles should be used on the centre of German democracy 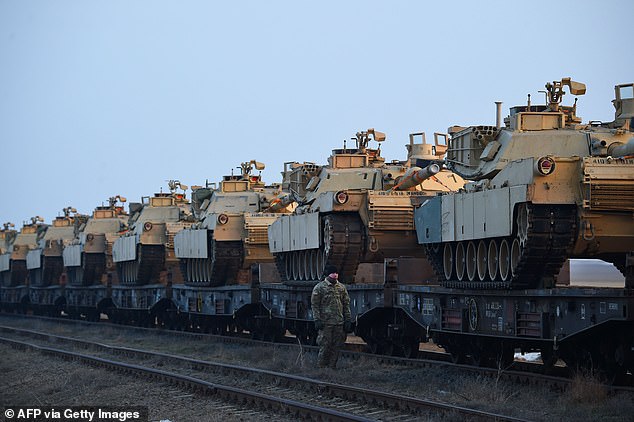 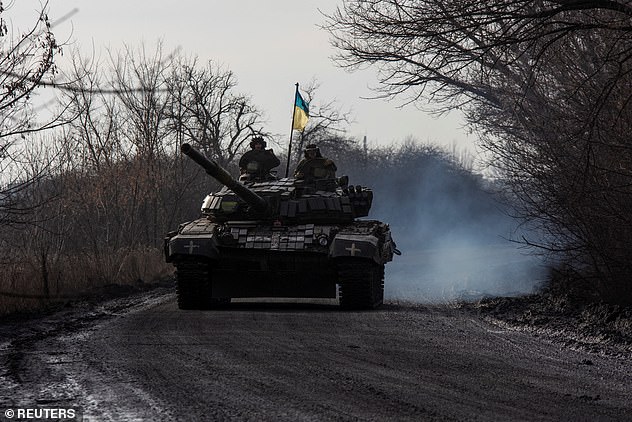 Ukrainian soldiers are seen riding on a T-72 Soviet-era tank, used widely in the ongoing conflict, in the Donetsk region, January 20 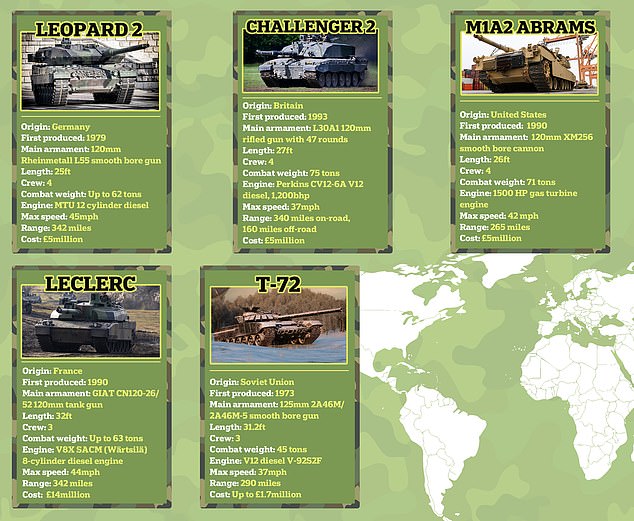 Who is providing tanks to fight Putin?

US: Officials say Washington is poised to send at least 30 of its M1 Abrams battle tanks, reversing its previous position. The tank has a 120 mm smooth bore gun.

GERMANY: Sources say German Chancellor Olaf Scholz has decided to send Leopard 2 battle tanks, a German-built vehicle with a 120 mm smooth bore gun that is one of the most widely used in the West. He will also allow other countries to send theirs, they say.

BRITAIN: The British government announced on January 14 that it would send its a squadron, or 14, of its Challenger 2 battle tanks, which has a 120 mm rifled gun.

POLAND: Warsaw has said it is ready to send up to 14 of its Leopard 2 tanks and has been pressing Berlin to approve the move. A source said Poland had submitted a request to Germany, which must approve re-export requests of the German-built vehicle.

NORWAY: The Norwegian government is considering whether to send some of its Leopard tanks, newspapers reported.

FINLAND: The Finnish government has said it could donate a small number of Leopard 2 tanks to Ukraine if a wider group of European nations also decided to do so, but said it would depend on Berlin’s approval.

FRANCE: French President Emmanuel Macron has asked his defence minister to ‘work on’ the idea of sending Leclerc battle tanks to Ukraine. Macron said that sending tanks must not escalate the situation, must take into account the time to train Ukrainians to be effective, and must not endanger France’s own security.

‘It’s time to send a clear, resolute message that we now consider Germany a direct party to the conflict, rekindling memories of WW2.

‘NATO wants to fight in this cunning way, pretending that it’s not fighting.

‘And [German defence minister Boris] Pistorius will go down in history as an imbecile who led to Germany to become a zone of direct destruction.

‘And [Chancellor Olaf] Scholz too, and [foreign minister Annalena] Baerbock.

‘The German people will know which new Nazi leaders they have raised and brought to power. That’s my subjective opinion.’.

One official said the tanks would be bought under an upcoming Ukraine Security Assistance Initiative package, which provides longer-range funding for weapons and equipment to be purchased from commercial vendors.

By law, Germany needs to agree for the tanks to be given to Ukraine, which is not a member of NATO.

By agreeing to send the Abrams at an as-yet unspecified time under the assistance initiative, the administration is able to meet Scholz’s demand for an American commitment without having to send the tanks immediately.

‘A few hundred tanks for our tank crews …. This is what is going to become a real punching fist of democracy,’ Andriy Yermak, the head of Ukrainian President Volodymyr Zelensky’s administration, wrote on Telegram.

Rishi Sunak hailed the move today, saying: ‘Together, we are accelerating our efforts to ensure Ukraine wins this war and secures a lasting peace.’

In response to the escalation, Putin has begun a creeping new stealth mobilisation for the war, even while denying it is underway.

The Kremlin rejected a report emanating from US officials that a new ‘quieter’ wave of 200,000 recruits is planned.

Yet there is clear evidence of a dramatic new grab of conscripts both for fighting and to work in military plants building tanks, missiles and other hardware for his war effort.

The drive was in progress before the expected tank deal, but Moscow could well use the ramp-up as justification for the mobilisation. 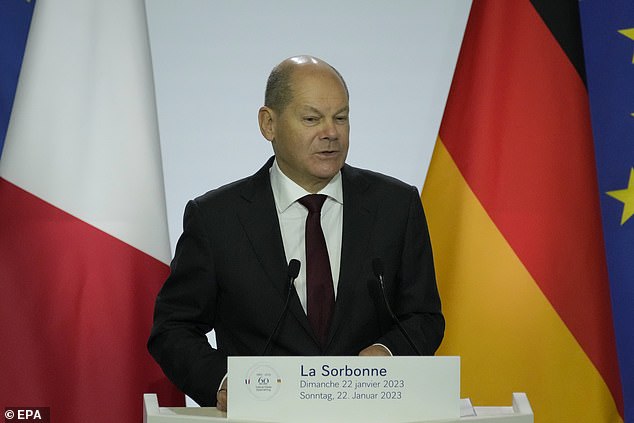 German Chancellor Olaf Scholz has decided to send the Leopards and allow other countries such as Poland to do so as well, sources said

A Western source said: ‘It is underway without any big announcements, and will increase.’

One tactic is likely to be to press teenage conscripts – who by law should not be sent to the war but only for military training- to rapidly sign up for the conflict with offers of increased salaries.

Separately, new rules will prevent men of military age driving abroad to countries like Georgia and Kazakhstan to avoid the draft.

Drivers will have to book slots to exit the country, making it easier for their authorities to veto their move abroad.

Thousands of men remain outside Russia for fear of being thrust on to Putin’s frontline where he has suffered catastrophic losses.

Meanwhile migrants from Tajikistan and Kyrgyzstan – who have received Russian passports – have been suddenly prevented from leaving Russia.

Those trying to do so have been told they are ‘included on the mobilisation list’, it was reported.

In Omsk region, a massive new training centre is being built apparently for thousands of draftees required to retrain for defence factories.

Instead of two years training, recruits will be given crash courses of up to six months to fill labour shortages in plants essential for Putin’s war effort, reported Readovka. 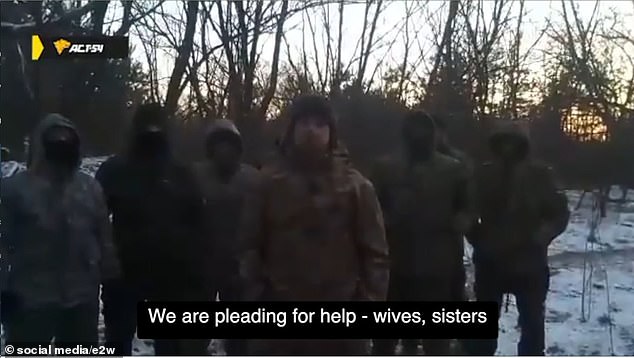 Draftee soldiers from Novosibirsk region forced to the frontline have begged their wives and sisters to protest on their behalf to the president and other officials.

Men taking new jobs in some regions, for example Kaluga, are being ordered to show their military registrations – documents they must hold by law – so employers can funnel them to the forces if ordered to do so.

Zelensky, who turns 45 on Wednesday, has pressed Western allies to provide their most modern battle tanks, saying ‘the need is larger’ in his nightly video address on Tuesday.

Germany and the US have until now held back on providing heavy armour, wary of support that could give the Kremlin reason to widen the conflict.

Russia has warned that supplies of modern offensive weaponry to Ukraine would escalate the war, with some officials saying its allies were leading the world into a ‘global catastrophe’.

Deliveries of battle tanks by the US would be a ‘another blatant provocation’, Anatoly Antonov, Russia’s US ambassador, said on Wednesday.

‘It is obvious that Washington is purposefully trying to inflict a strategic defeat on us,’ Antonov said in remarks published on the embassy’s Telegram messaging app.

‘American tanks will be destroyed by our military in the same way all other samples of NATO equipment are being destroyed,’ Antonov said.

Ukraine has pleaded for months for Western tanks that it says it needs to give its forces the firepower and mobility to break through Russian defensive lines and recapture territory.

The question of whether to supply Ukraine with significant numbers of tanks has dominated debate among Western allies in recent days. 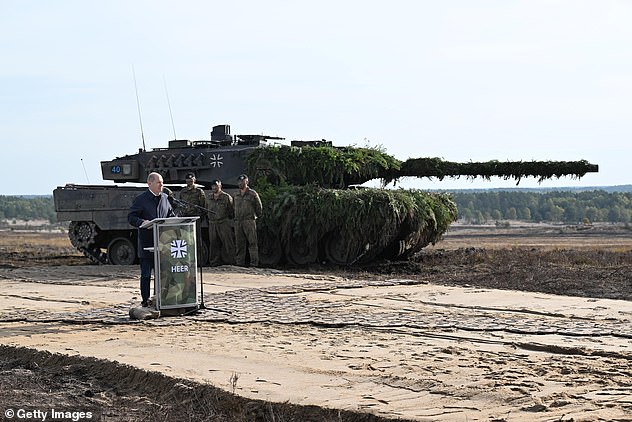 Germany has been pivotal because Leopards, fielded by some 20 armies around the world, are seen as the best option for Ukraine as they are available in large numbers and are easy to deploy and maintain.

Although the US Abrams tank is considered less suitable, due to its fuel consumption and maintenance needs, a US decision to send them to Ukraine could make it easier for Germany – which has called for a united front among Ukraine’s allies – to allow the supply of Leopards.

German Chancellor Olaf Scholz had decided to send the Leopards and allow other countries such as Poland to do so as well, two sources familiar with the matter said.

Spiegel magazine said Germany was planning to supply at least one company of Leopard 2 A6 tanks, which usually comprises 14 tanks. Some other allies intend to go along with Germany in supplying their Leopards, it reported.

Separately, Ukraine dismissed more than a dozen senior officials in the biggest shake-up of its wartime leadership.

The European Union, which offered Ukraine the status of candidate member last June, welcomed the changes.

Among the officials who resigned or were dismissed were the governors of the Kyiv, Sumy, Dnipropetrovsk, Kherson and Zaporizhzhia regions, the latter three front-line provinces. Kyiv and Sumy were major battlefields earlier in the war.

Some of the officials who left had been linked to corruption allegations.

Ukraine has a history of graft and shaky governance and is under pressure to show it can be a reliable steward of billions of dollars in Western aid.

The administration’s reversal comes just days after a coalition of more than 50 senior defence officials from Europe and beyond met in Germany to discuss Ukraine’s war needs, and battle tanks were a prime topic.