Saudi Arabia have defeated Lionel Messi’s Argentina in the opening game of their World Cup campaign in what is one of the greatest sporting upsets in history.

The Gulf state is currently ranked a lowly 51st in the world behind hosts Qatar and came into the tournament with low expectations in a group with Argentina, who were tipped by many to challenge for ultimate glory.

But in a truly stunning turn of events, the underdogs sent the team ranked number three in the world crashing to the bottom of Group C with a stellar 2-1 victory.

In doing so, they snapped Argentina’s 36-match winning streak and all but shredded 35-year-old Messi’s dream of winning the World Cup in what could well be the maestro’s final ever international competition.

The man considered by many to be the world’s greatest ever footballer clinically dispatched a questionable penalty for Argentina in the first half, but Saudi Arabia quickly retorted after the break with a fine finish from Saleh Al-Shehri at the 48-minute mark.

Saudi’s star man Salem Al-Dawsari followed up the equaliser with a rocket into the top corner just minutes later, sending his supporters into raptures as Messi hid his head in his hands.

The dying moments of the game saw the Saudi back line fend off attack after attack, with the allotted eight minutes of added time somehow extended to 13 by the referee.

But the defence held resolute and when the final whistle blew the Saudi contingent in the stadium erupted in wild celebrations, as the Argentine supporters looked on in pure disbelief.

The Argentina loss rivals other World Cup upsets like Senegal’s 1-0 win over titleholder France 1-0 in the 2002 tournament opener and the United States beating England by the same score in 1950. 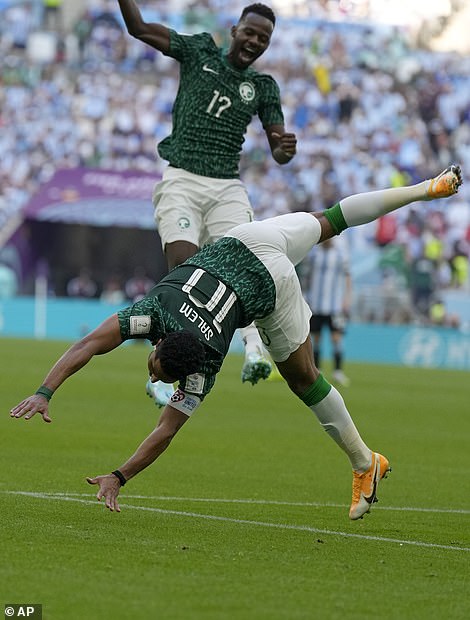 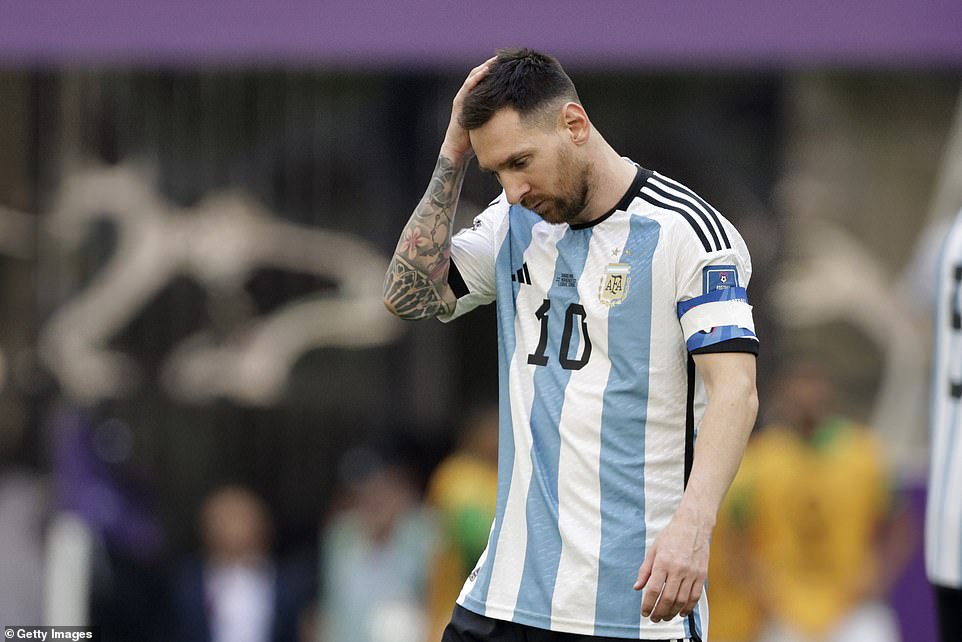 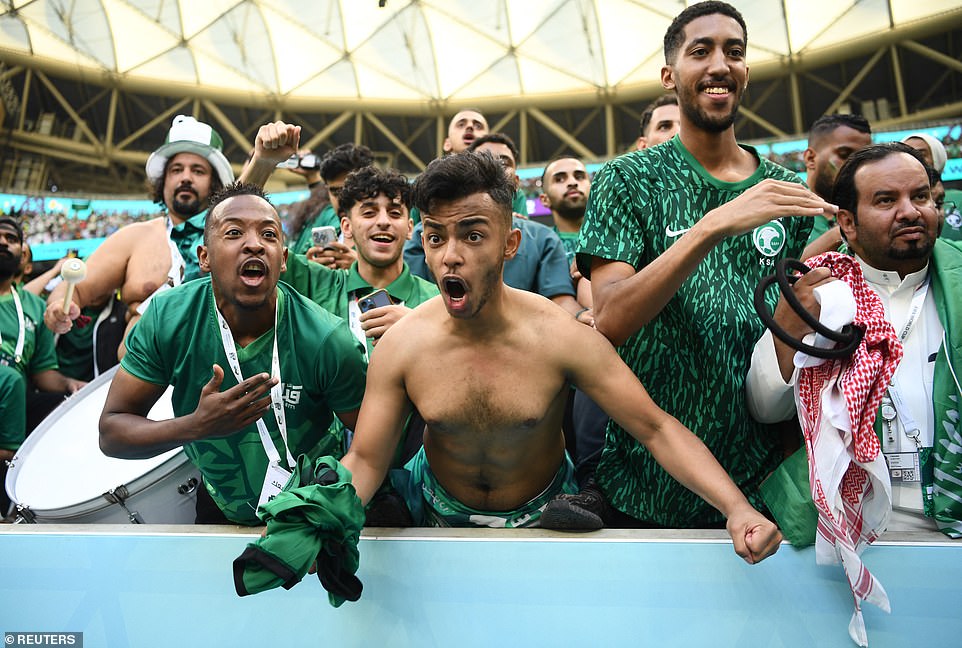 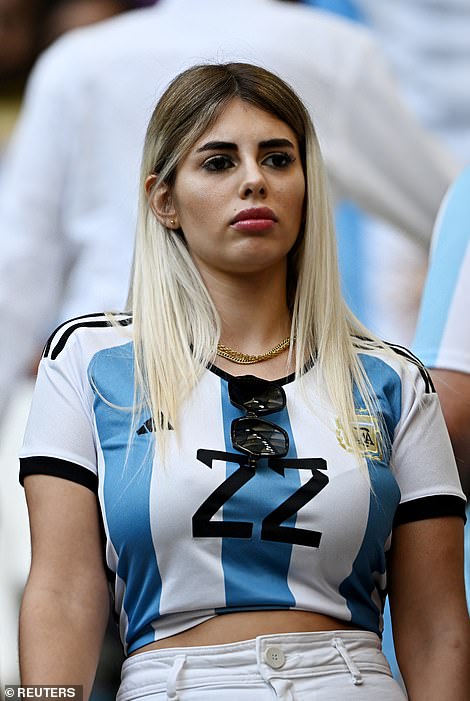 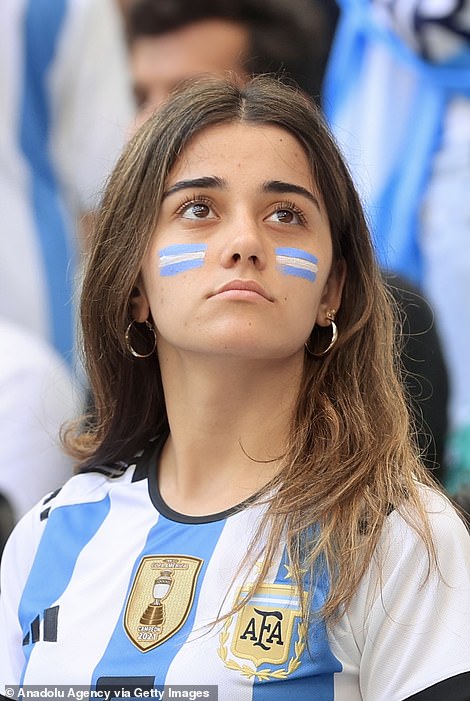 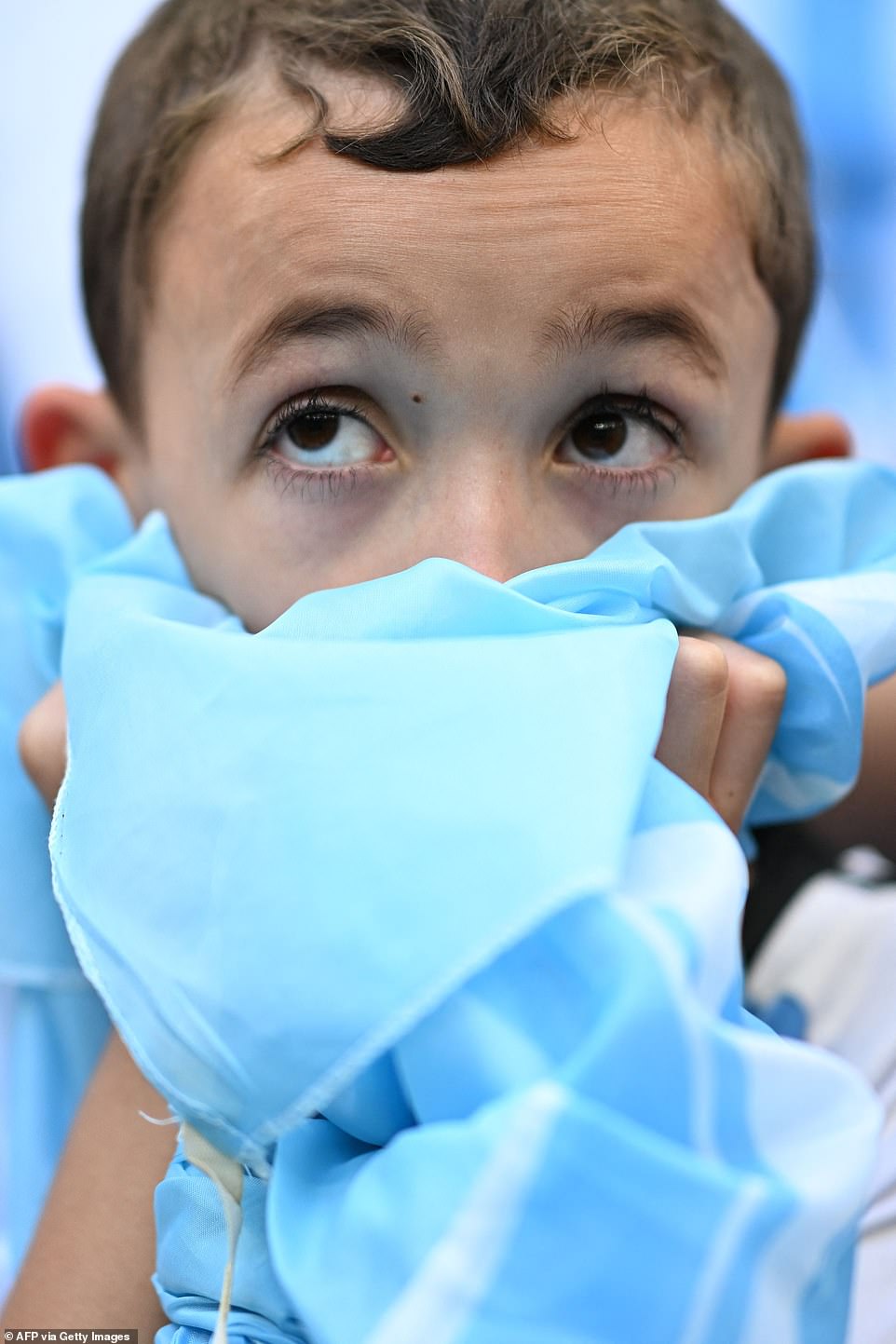 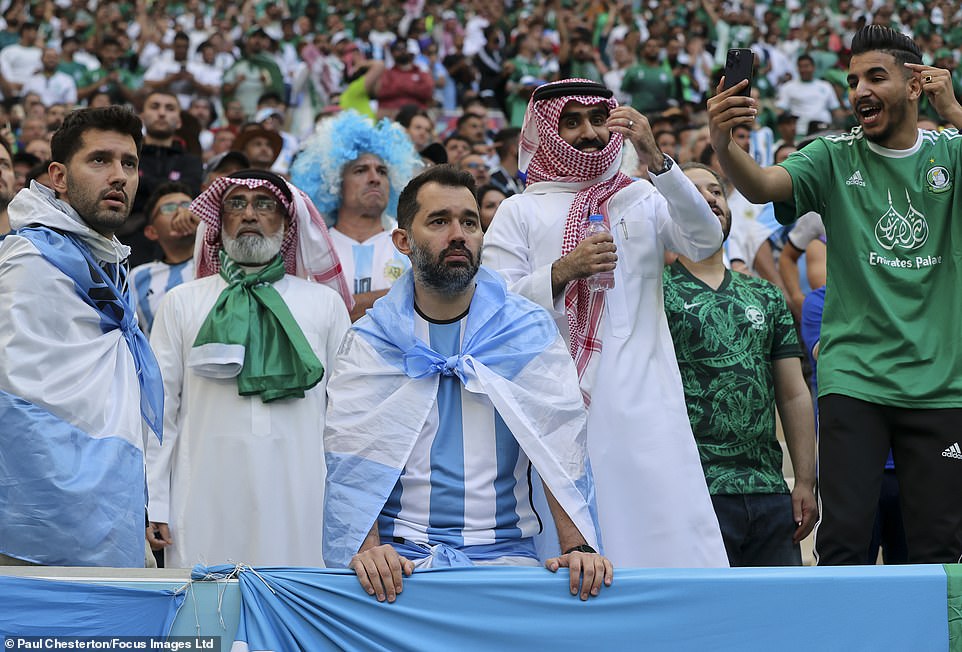 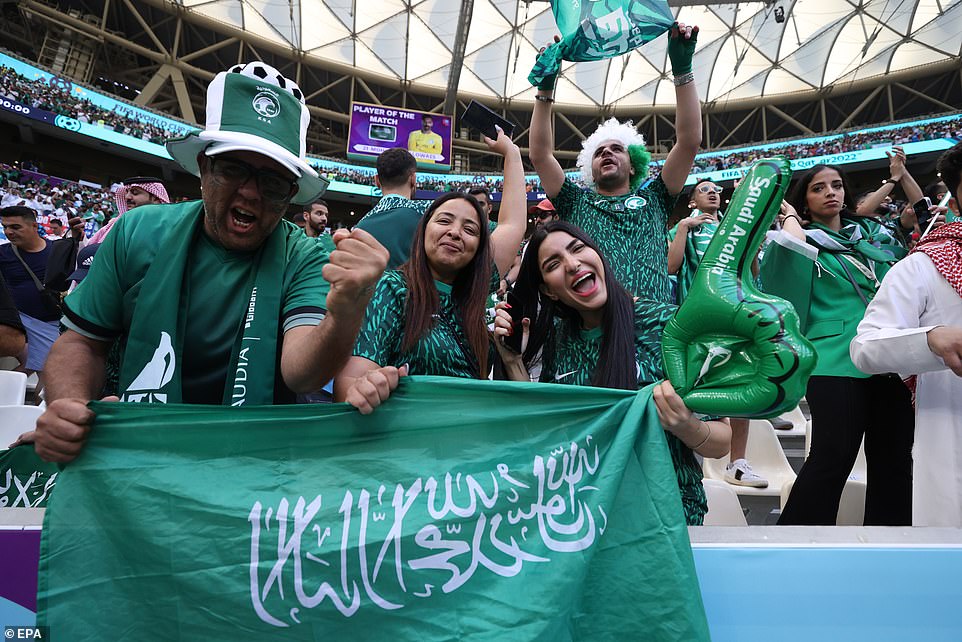 Saudi supporters were sent into raptures at the final whistle

Saudi Arabia now sit triumphant at the top of the group, with Poland and Mexico set to play later today.

They were a 33/1 shot to win the game before kick-off at the Lusail Stadium.

But when trailing 1-0 to Argentina at half time, the odds of the Gulf state coming back to win the Group C clash sat at an eye-watering 500/1.

The Kingdom is ranked 48 places lower than Argentina in FIFA’s world rankings.

The Paris Saint-Germain star shook hands with a Saudi coaching staff member after the final whistle and stood with his hands on his hips near the centre circle, an all-too familiar scene for one of the best players ever who is yet to win the biggest prize in football.

A stunned Messi watched as scores of green-clad fans from Saudi Arabia, Qatar’s neighbour, celebrated in in disbelief in the stands while Saudi Arabia’s substitutes stormed the field. 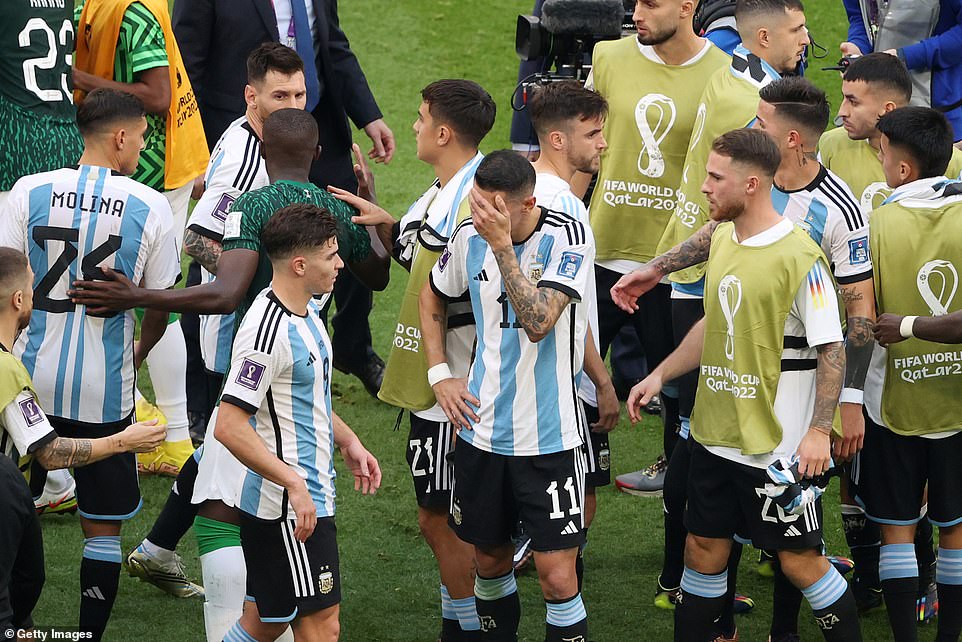 Argentina players show their dejection after the 2-1 loss during the FIFA World Cup Qatar 2022 Group C match between Argentina and Saudi Arabia at Lusail Stadium on November 22, 2022 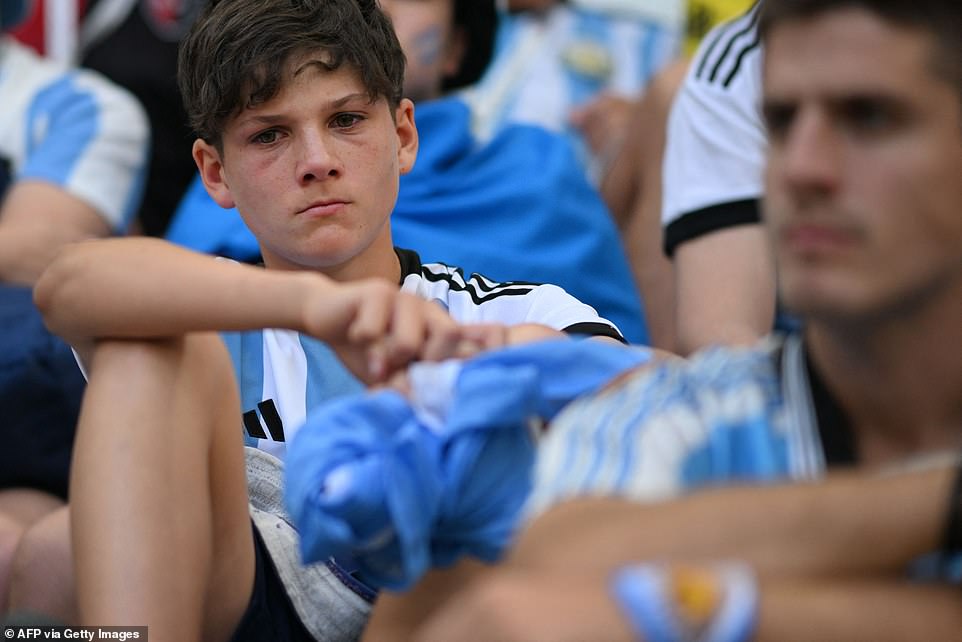 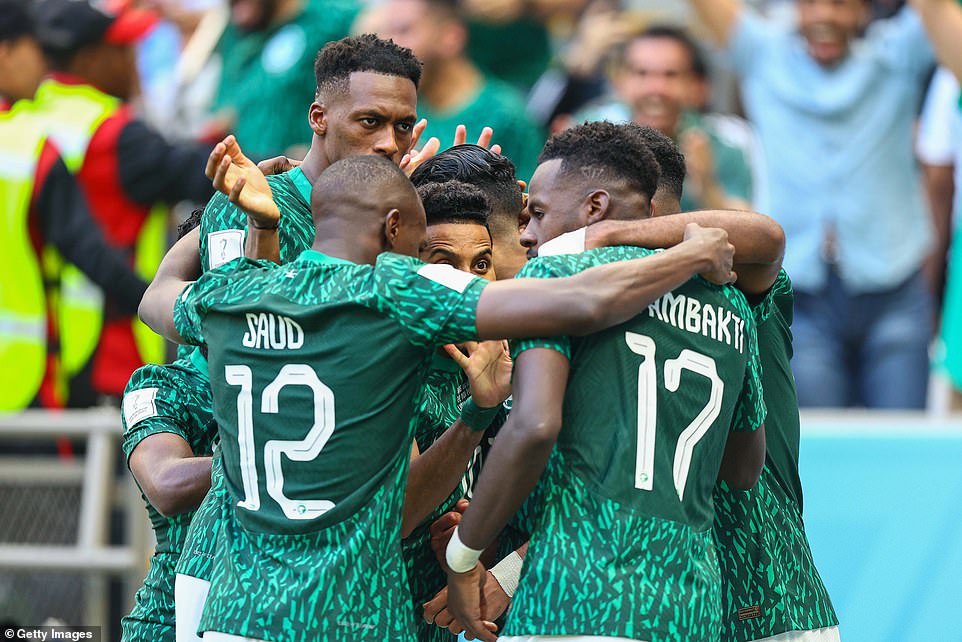 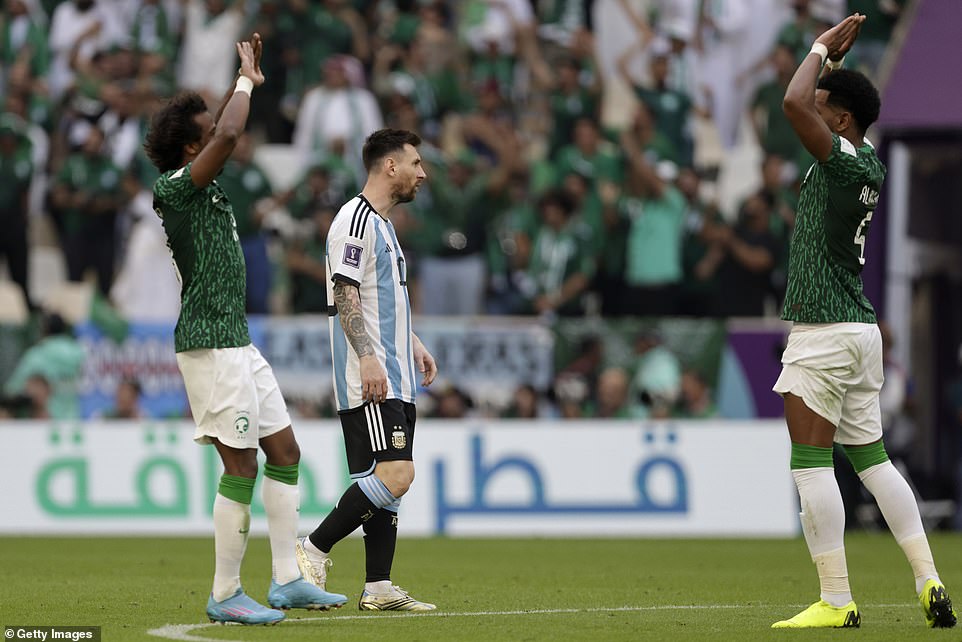 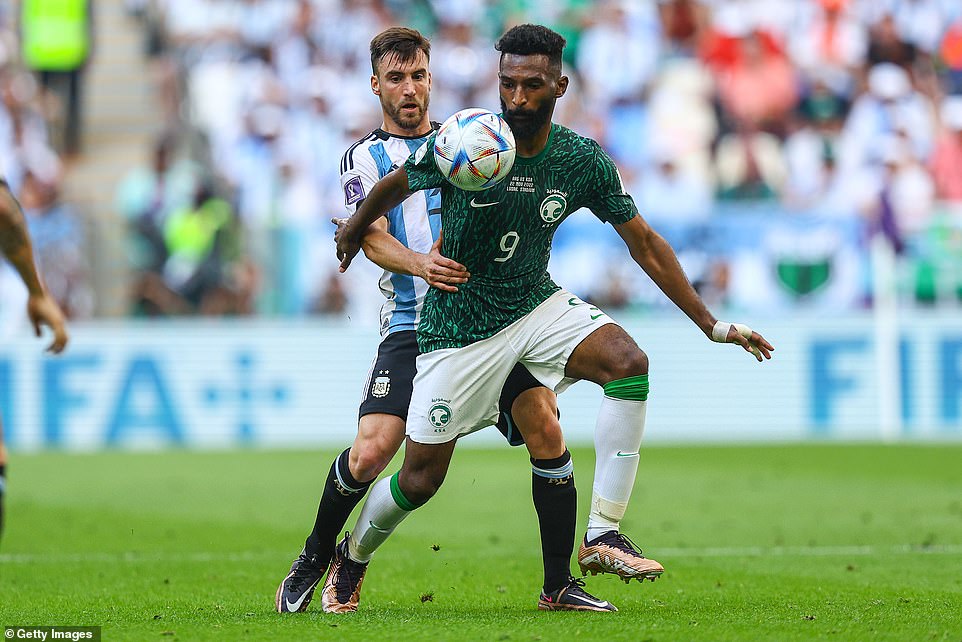 Feras Albrikan of Saudi Arabia in action during the FIFA World Cup Qatar 2022 Group C match between Argentina and Saudi Arabia at Lusail Stadium on November 22, 2022 in Lusail City, Qatar 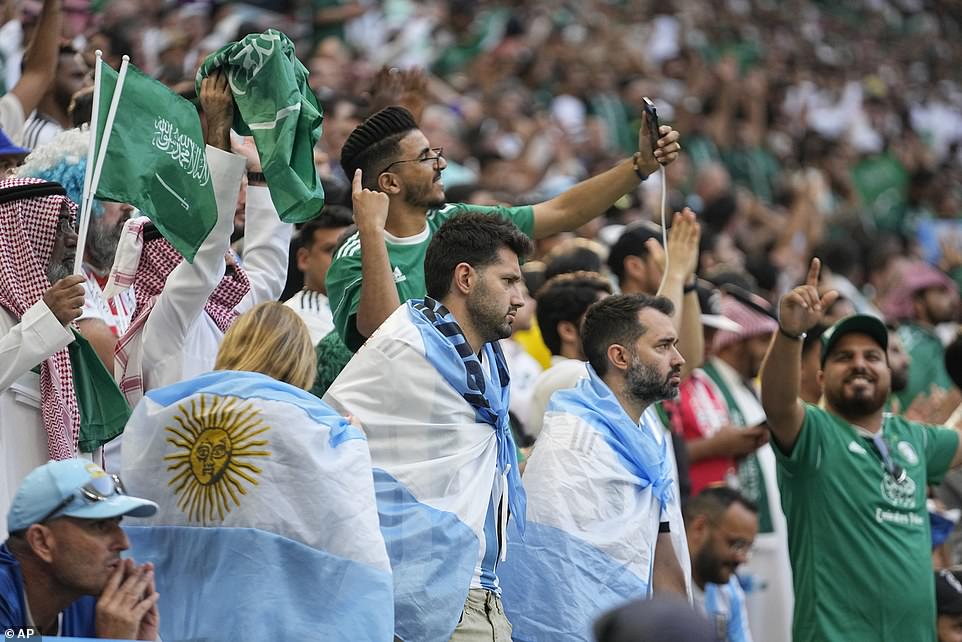 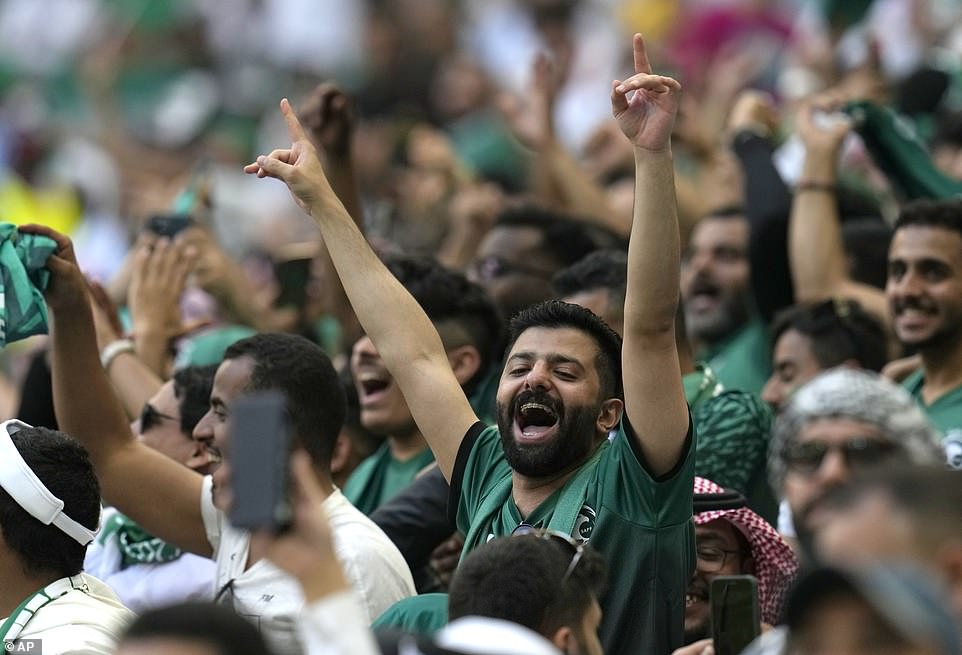 It looked easy for Argentina in those opening 10 minutes, with Messi having his first shot after less than 100 seconds (he should have scored) and converting from the penalty spot when VAR deemed that Leandro Paredes had been wrestled to the floor.

Saudi Arabia had no inclination to attack and didn’t threaten to have a shot on target during the first half; the sole intention of head coach Herve Renard was to try and frustrate Argentina by playing a high-risk, high line defence to catch their vaunted opponents offside.

With the help of VAR and some fractionally mistimed runs, it worked as Messi and Lautauro Martinez (twice) had goals disallowed by the most slender of margins. The way the game flowed, it seemed inevitable that Argentina would spring the trap once and get the buffer they needed.

What followed in the second half was quite extraordinary. The Saudi fans created a tempest, roaring on their team and interspersing it all with chants of ‘Ole, Ole, Ole, Ole!’ – it all proved to be quite inspirational.

They levelled in the 49th minute when Saleh Al-Shehri, a 29-year-old forward for Al Hilal, took advantage of Tottenham’s Christian Romero not reacting quickly enough and his shot, with a bobble, spun away from Emi Martinez’s dive.

You could feel the power shift in an instant. All around there were green shirts hooting and hollering – screaming even – that their team had pegged back one of the favourites but, quickly, it was about to get so much better.

In what seemed like their next attack, again down Argentina’s right, Al Dawsari, another Al Hilal player, shaped to go one way before cutting inside and unleashing the strike of his life, a shot that whizzed past Martinez, the Aston Villa goalkeeper, before he realised what had happened. 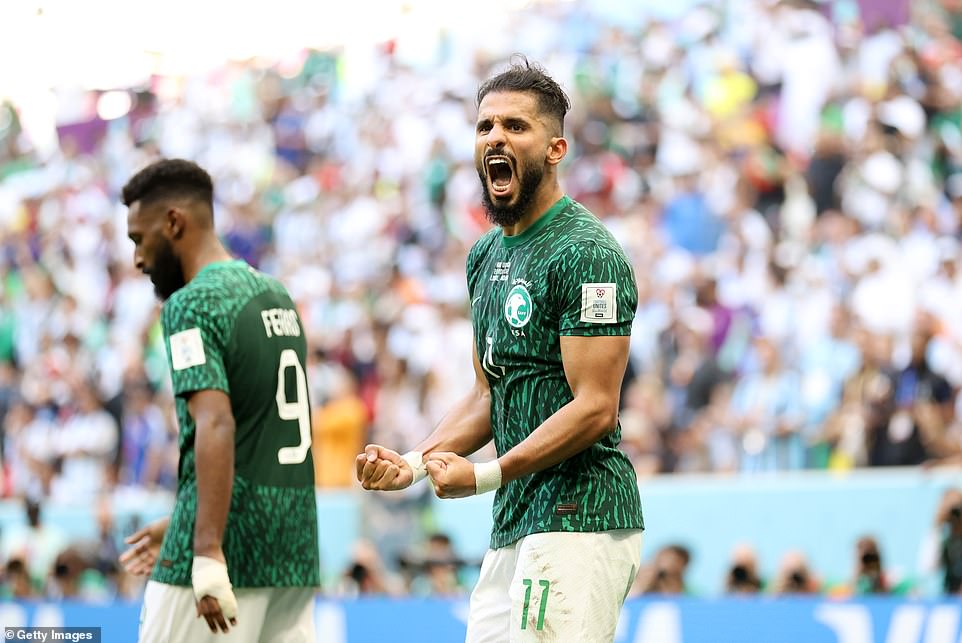 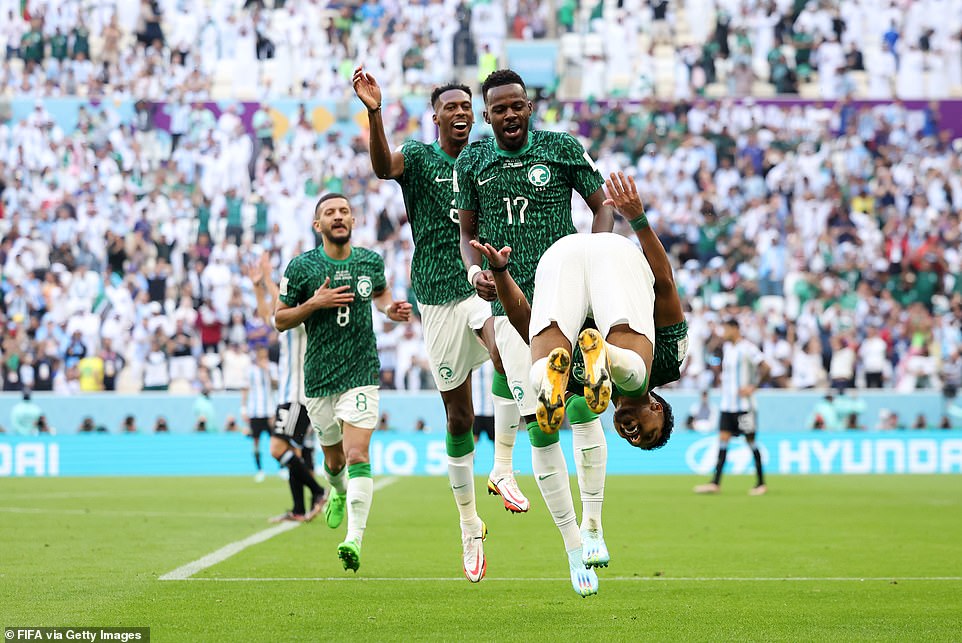 Al-Dawsari, who is nicknamed ‘The tornado’, then put Saudi Arabia into an unexpected lead just a few minutes later

Some of the games so far have felt artificial – the opening one between Qatar and Ecuador in particular – but this was bedlam, wonderful bedlam, everything that football at a major tournament should be when different cultures and styles collide.

The question from here was what Argentina could summon in response. History tells you they have been vulnerable when you least expect it at a World Cup, that they can get lost in the emotion, and this was history repeating.

Messi thought he was going to level things up in the 56th minute when the goal opened up in front of him but, seemingly from nowhere, Hassan Al-Tambakti, an unheralded defender for Al Shabab, slid in to make a tackle as if his life depended on it, pilfering the ball perfectly.

Al-Tambakti leapt to his face, punching the air as if he had scored, and really the tackle was as good as a goal. Messi, meanwhile, rocked on his haunches and shook his head, unable to comprehend how the moment had gone.

It would get even more extraordinary. Shortly after, Nicolas Tagliafico found himself at the back post, three yards out, seemingly ready to turn the ball in. What he hadn’t counted on was Muhammad Al Owais flying like Superman to turn his shot aside.

You sensed here that this would be Saudi Arabia’s day and the feeling intensified in the final 10 minutes when Messi struck a free-kick from 25 yards horribly over the bar – it was from the kind of range you have seen him find the top corner so gloriously, on so many occasions.

Deep into injury time, which seemed to last as long as a period of extra-time, Argentina had run out of ideas and, deservedly, Saudi Arabia had seen the job through, the roar at the final whistle one to match the one that will come from the tournament winners next month.