Commissioned to produce a portrait of Pele in 1977, the artist Andy Warhol quipped: ‘Pele was one of the few who contradicted my theory: Instead of 15 minutes of fame, he will have 15 centuries.’

It nicely sums up the adulation for the footballer widely considered the greatest to ever take the field, and who the world now mourns following his death at the age of 82.

Pele was regarded by his contemporaries as the very best but esteem for the Brazilian extended well beyond the stadium and into the realms of sport, politics and popular culture. 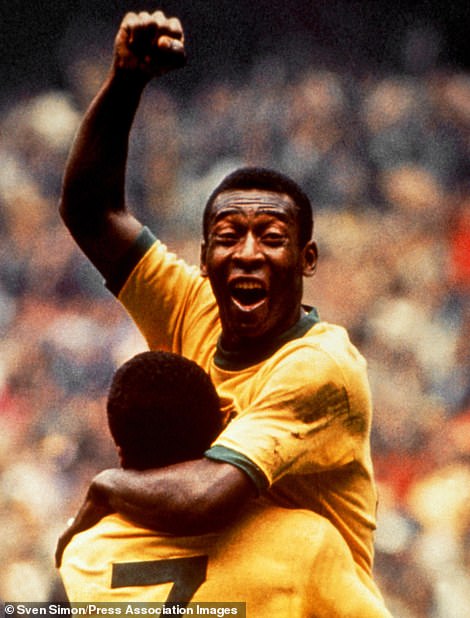 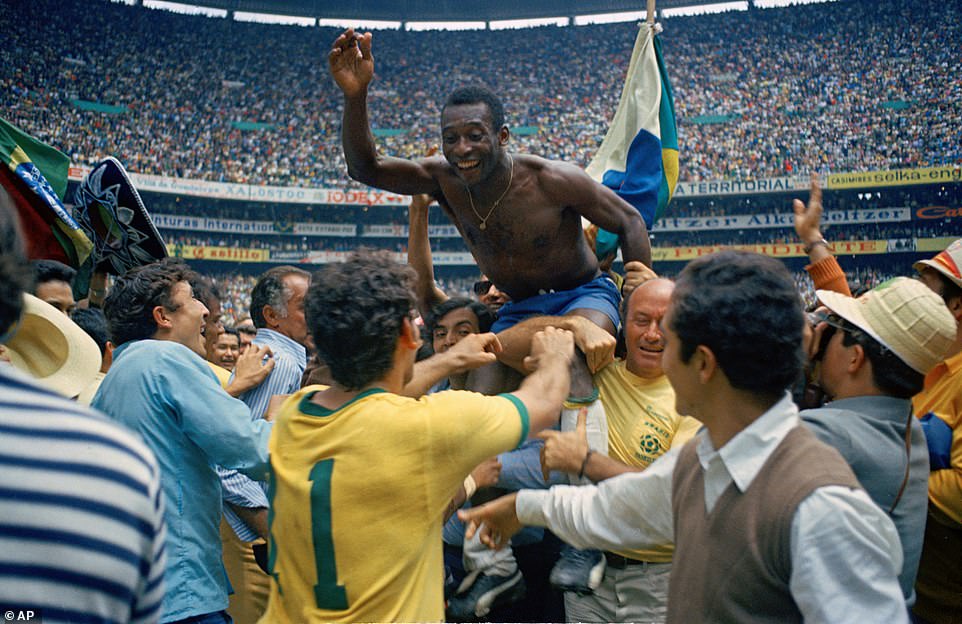 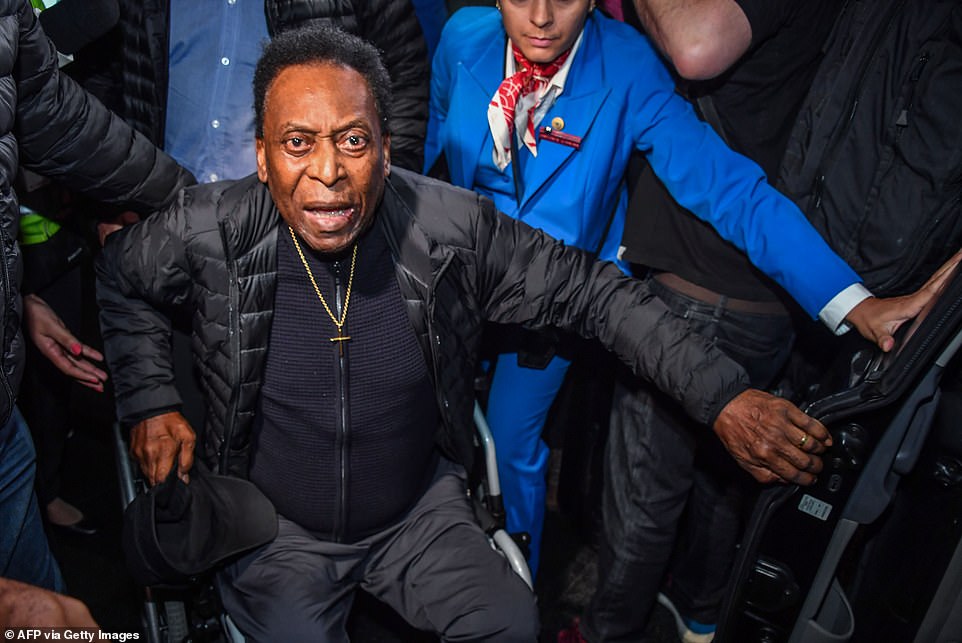 Nobody can remember with absolute certainty how Edson Arantes do Nascimento became contracted into just Pele but those four letters commanded recognition and respect in all four corners of the globe.

Once a reporter asked Pele if his fame was comparable to that of Jesus Christ, to which he replied: ‘There are parts of the world where Jesus Christ is not so well known.’

A career of relentless goalscoring began aged 15. By 17, Pele was a World Cup winner. He would inspire Brazil to two more triumphs, in 1962 and 1970.

By the end of it all, he had amassed 1,279 goals in 1,363 games, which is recognised as a Guinness World Record though disputed by many because it includes friendly matches.

But Pele’s life away from the pitch was just as colourful as Brazil’s famous yellow shirts. He married three times – the last when he was 75 – and he also had many affairs. He has at least seven children by different mothers. 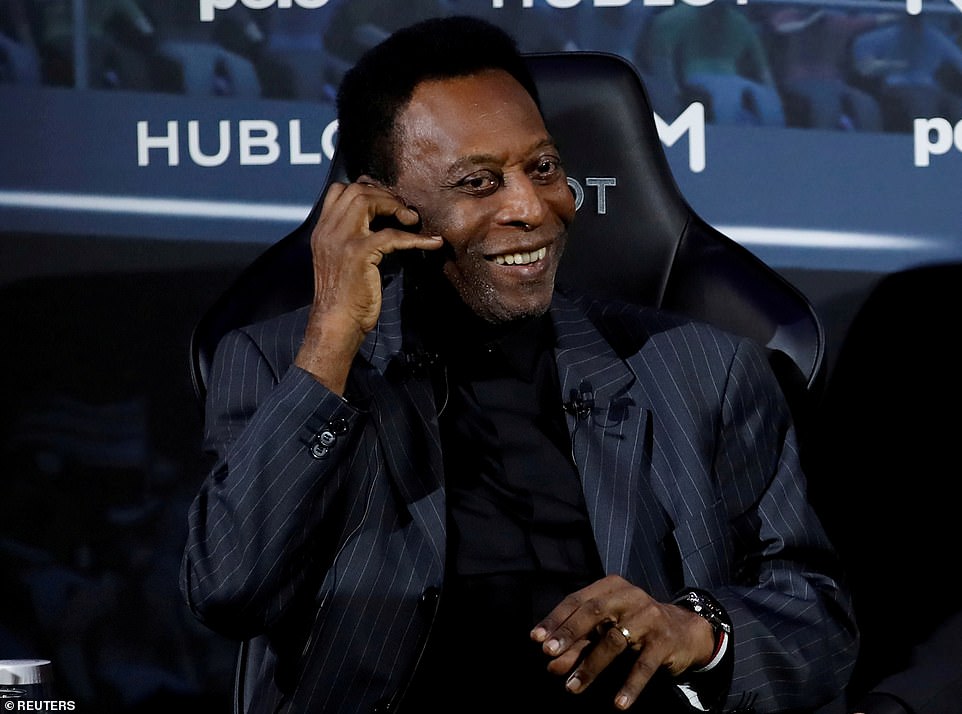 Pele, pictured in Paris in 2019, will be remembered as arguably the greatest footballer ever to take to the pitch

PELE: DEAD AT 82 AFTER BATTLE WITH CANCER

Some have suggested Pele tarnished the purity of his footballing legacy through commercialism – he promoted everything from Coca-Cola to Viagra – but though he was among the best-paid athletes of his era, his income compares poorly to the eye-watering earning potential of sports stars today.

His final years were dogged by health problems and unsuccessful hip operations left him unable to get about without the aid of a wheelchair. In September 2021, he underwent surgery to remove a tumour from his colon.

Michel Platini, the renowned former player, noted the difference between Pele’s on and off-field lives. ‘There was Pele the footballer and there was Pele the man but when he played football Pele was God.’

Pele the boy grew up in grinding poverty in the favelas of Tres Coracoes, the son of footballer Joao Ramos do Nascimento (nicknamed Dondinho) and Celeste Arantes.

He was named after the American inventor Thomas Edison but without the ‘i’ – yet the nickname the world knew him by may have come from the boy’s inability to pronounce the name of local Vasco da Gama goalkeeper Bile, although Pele never corroborated the story.

Adopting footballing genes from his father, Pele usually played in the streets with a sock stuffed with newspapers and bound with string, or with a grapefruit. A real football was out the question. 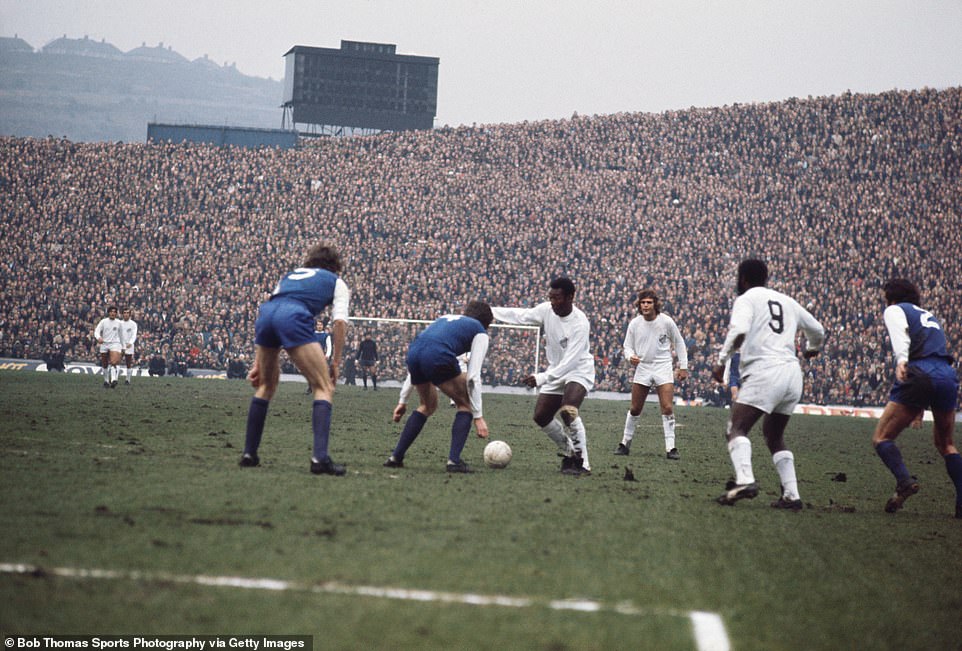 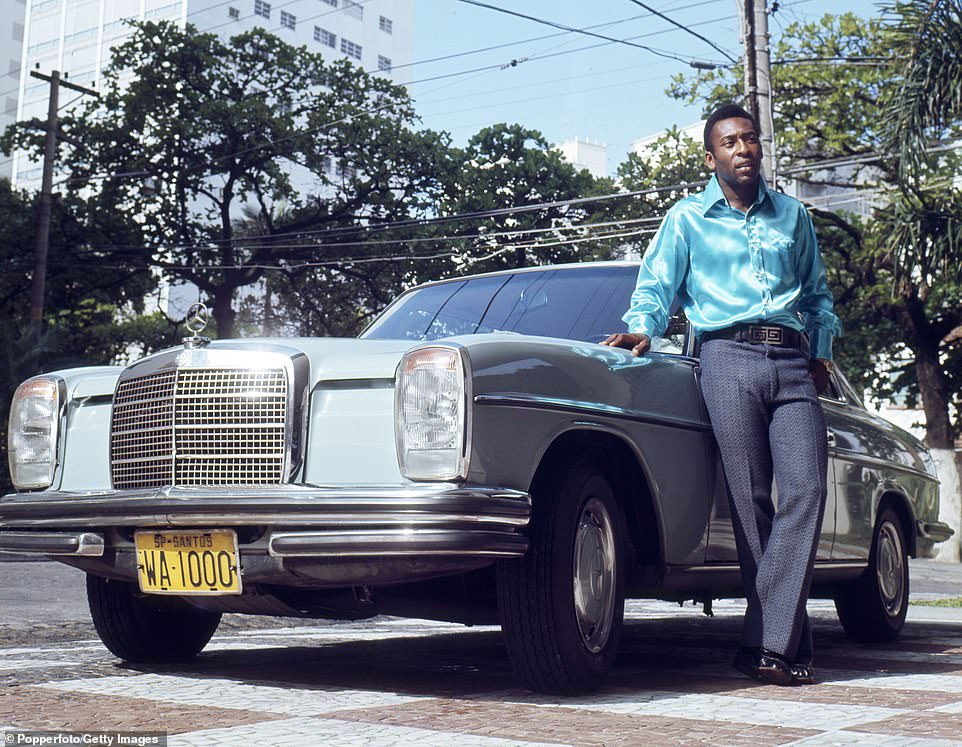 Wearing designer clothes and posing next to a Mercedes, Pele is pictured in 1966 at the peak of his footballing prominence 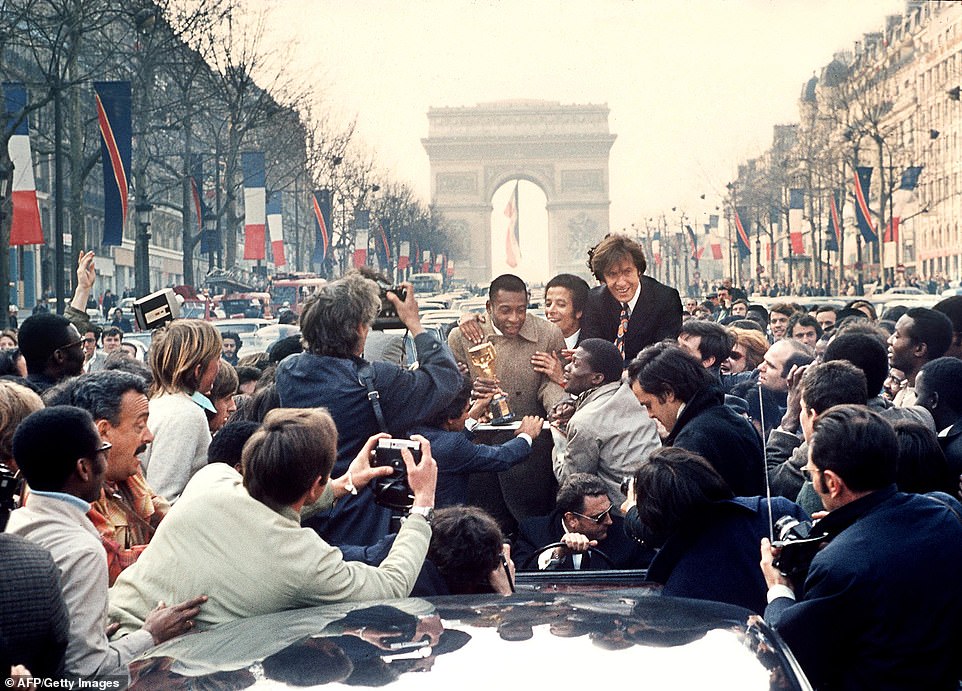 His worldwide fame led to adulation from crowds wherever he went, such as on the Champs Elysees in Paris in March 1971

Such was his natural talent, Pele’s youth team coach was proclaiming to the directors of prominent club Santos that the 15-year-old would become ‘the greatest football player in the world’.

He was the league’s highest goalscorer at just 16 and would score a grand total of 643 goals in 659 matches for Santos, his club for 18 years until 1974 as they dominated Brazilian domestic football.

This was the record number of goals scored for a single club until Lionel Messi surpassed it with his 644th for Barcelona in December last year. 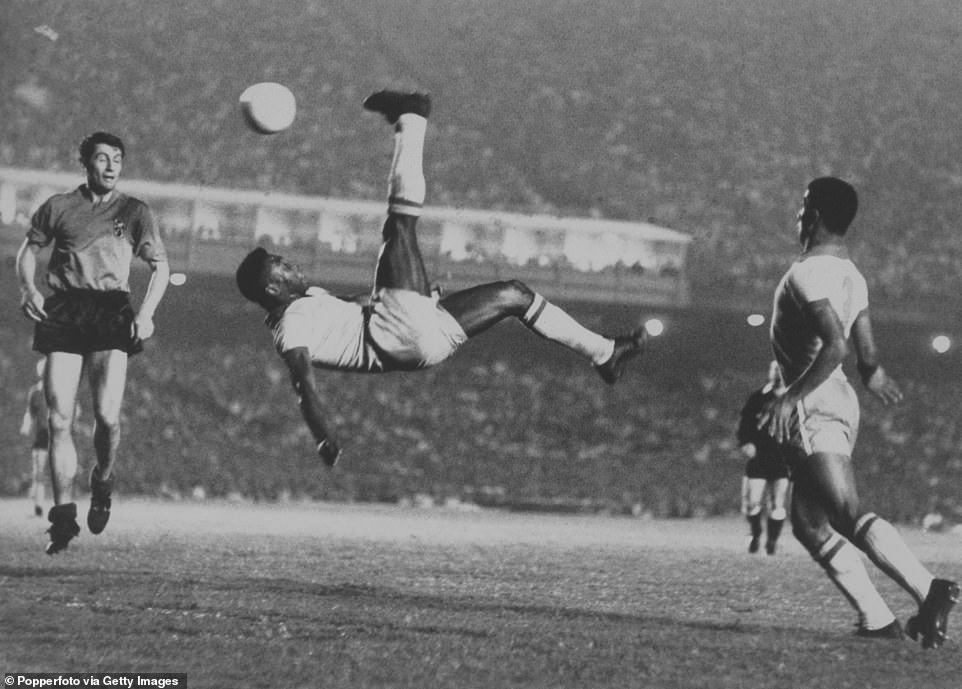 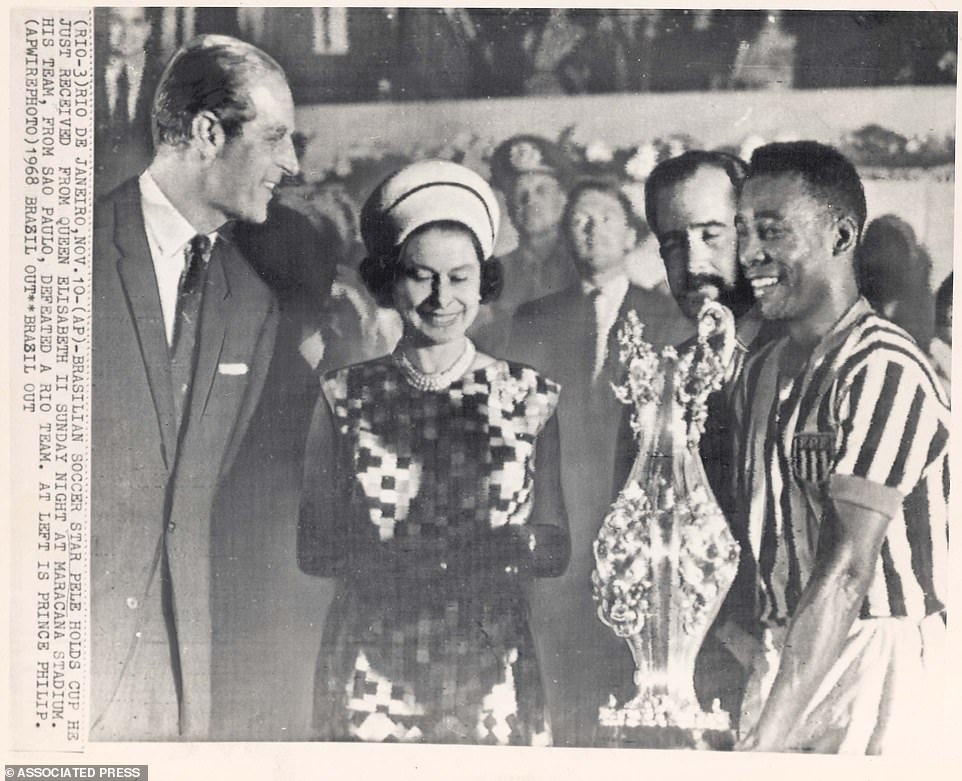 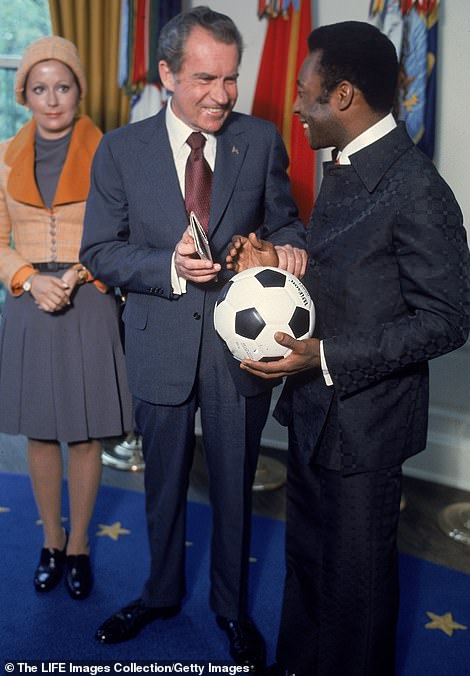 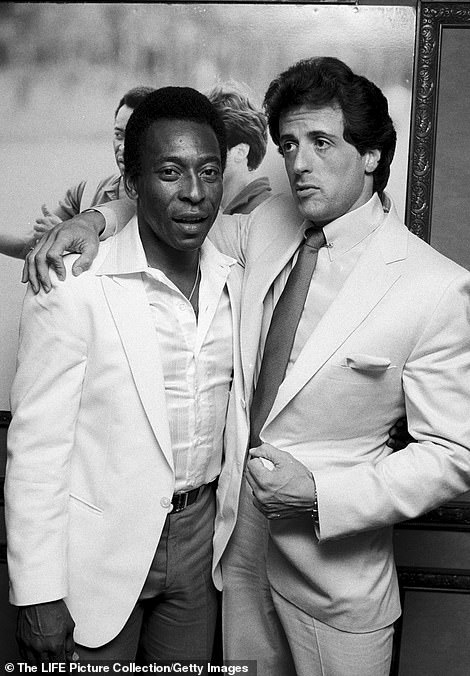 Pele’s engagements also took him to the White House to meet President Richard Nixon (left), before he left office in 1974, and a meeting with Hollywood star Sylvester Stallone (right)

But it was Pele’s feats for Brazil at the World Cup, beaming into more and more homes with the spread of television, that brought him to global attention and acclaim.

Aged just 17, he arrived at the 1958 tournament in Sweden nursing a knee injury but his team-mates insisted he be picked for the team.

At the time, he was the youngest to feature at a World Cup and would score twice in the final as Brazil beat the hosts Sweden 5-2.

Such were his exertions, Pele passed out at the final whistle and had to be revived by team-mate Garrincha before bursting into tears of joy. 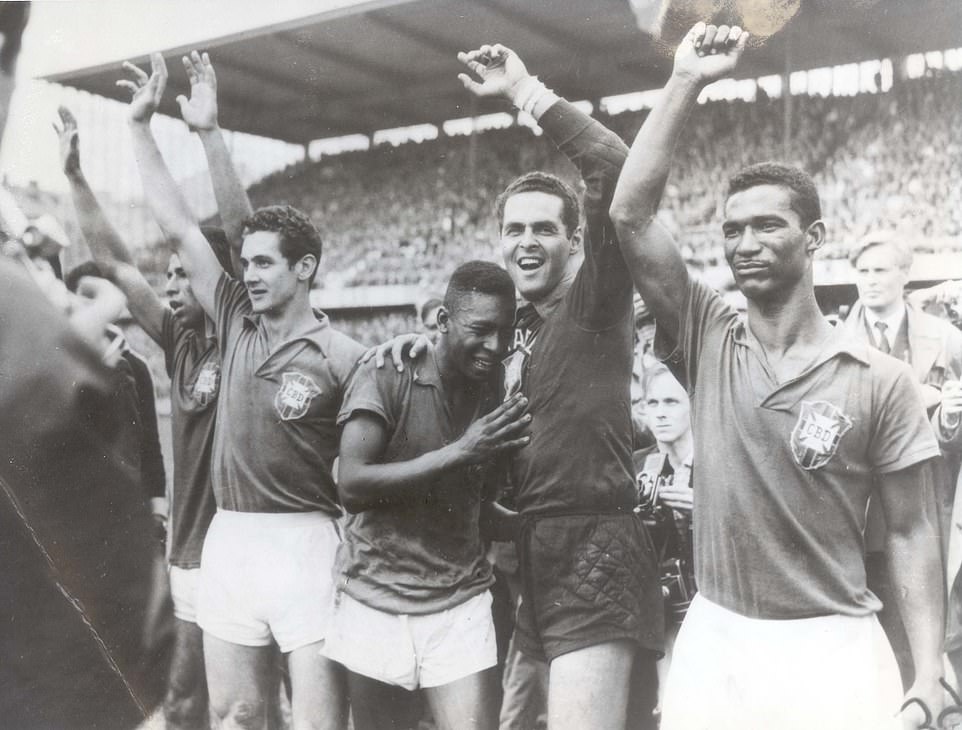 Still a teenager, Pele is seen here weeping on the shoulder of keeper Gilmar Dos Santos Neves after the 1958 World Cup win 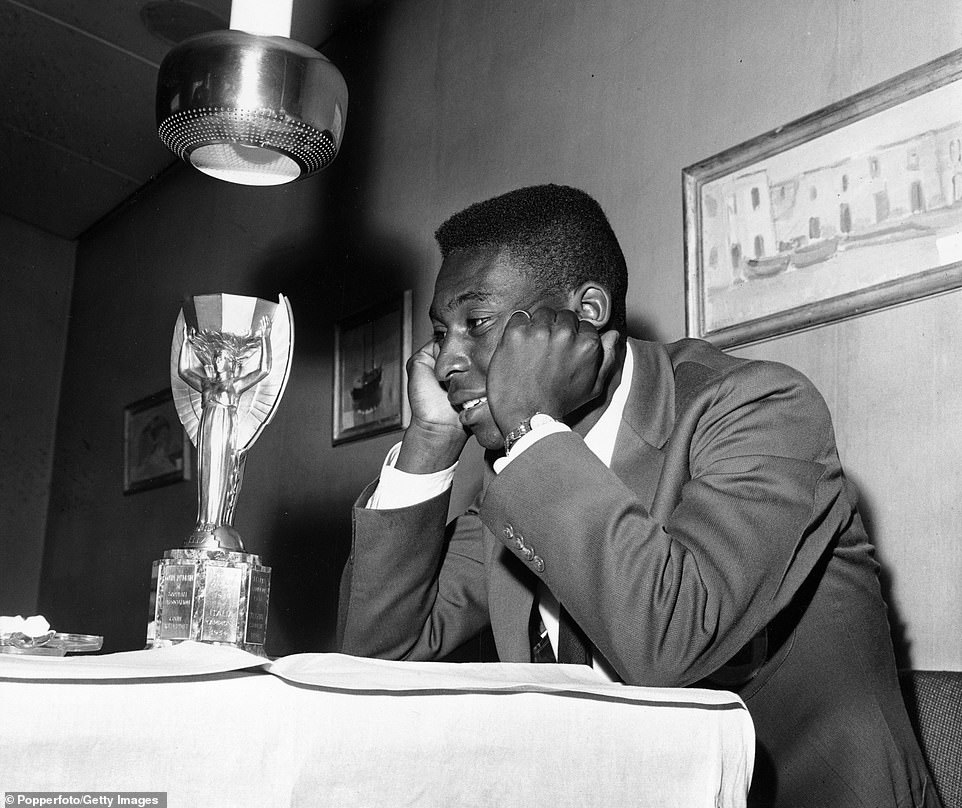 Pele suffered an injury during Brazil’s successful title defence in 1962, missing most of the games, and in England in 1966 was kicked from pillar to post as they exited after the group stage.

He was reluctant to commit to the 1970 campaign but Brazil boasted an excellent team and Pele was truly the jewel in their crown.

With colour TV in many living rooms, fans were mesmerised by Pele and his yellow-shirted colleagues as satellites beamed the games from Mexico around the world.

In the group-stage meeting with England, Pele was famously denied by the ‘save of the century’ by Gordon Banks having shouted ‘goal’ as the ball left his head. 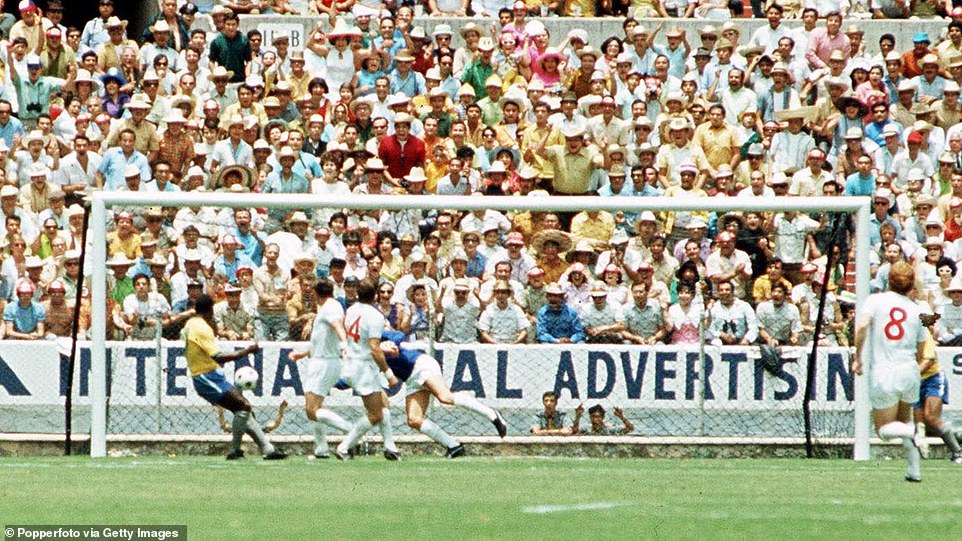 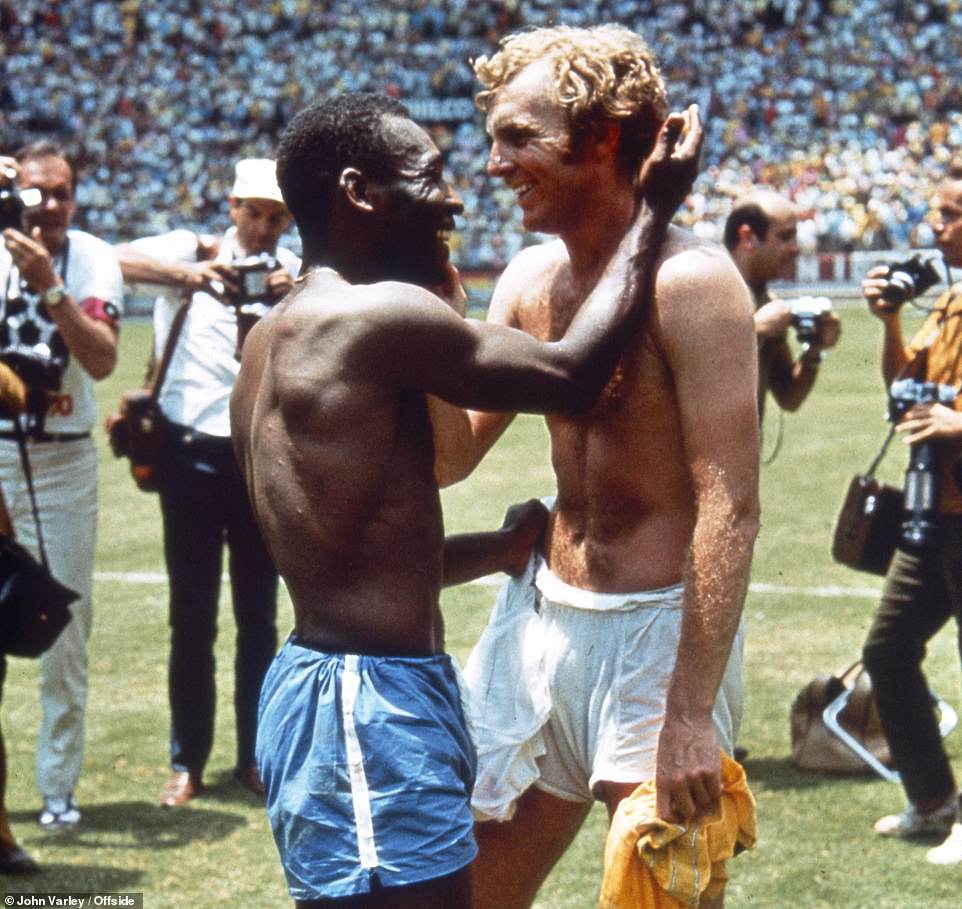 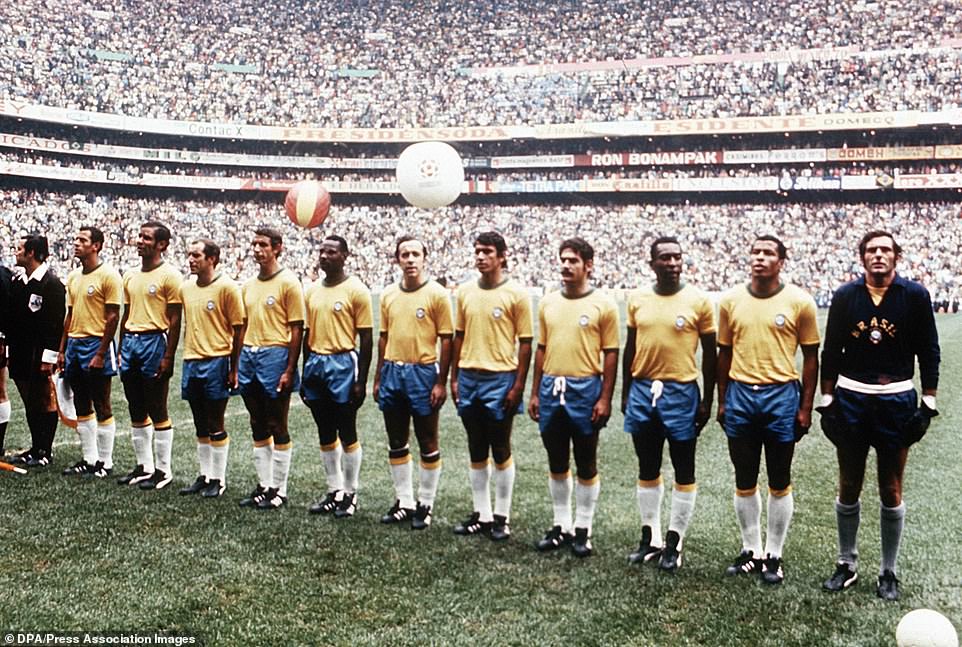 At various points in his career, Pele was courted by prominent European clubs such as Real Madrid, Inter Milan, Juventus and Manchester United but he stayed with Santos even if they regularly toured Europe to capitalise on his fame.

After two years of semi-retirement, he signed for the New York Cosmos in 1975 and played in the North American Soccer League (NASL).

For a country supposedly uninterested in ‘soccer’, it was surprising that Pele was injured amid a crush of hysteric fans at a public appearance in Boston shortly after his arrival and had to be carried off on a stretcher.

Pele’s fame made him a household name even in the States with Richard Nixon and Jimmy Carter among the Presidents to grant him an audience at the White House.

His presence helped launch the game in the United States and persuaded other legends like George Best, Franz Beckenbauer and Johan Cruyff to play there. 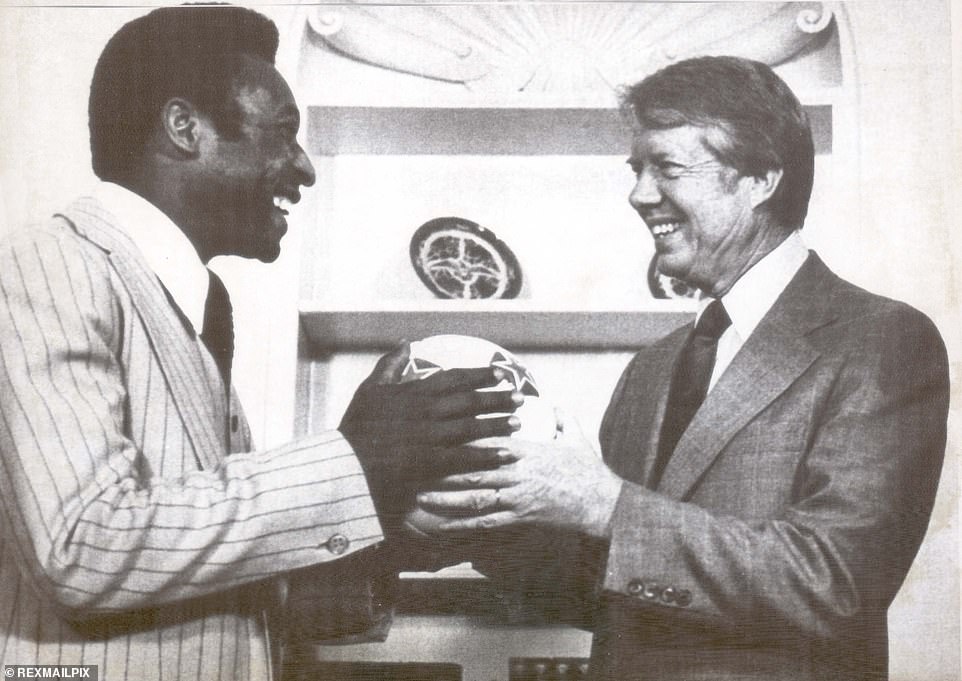 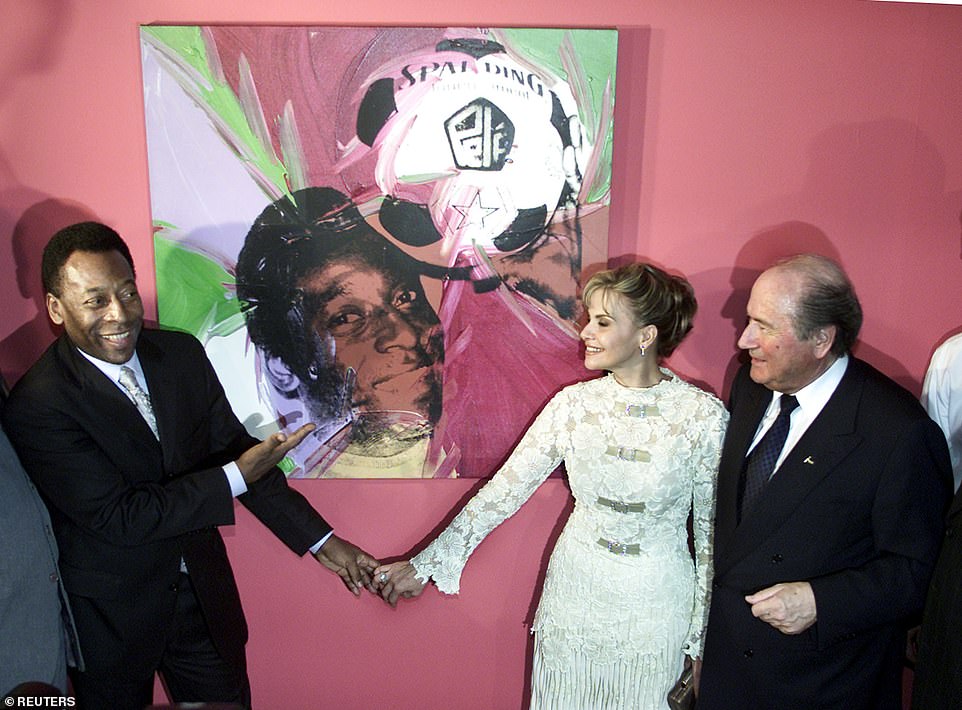 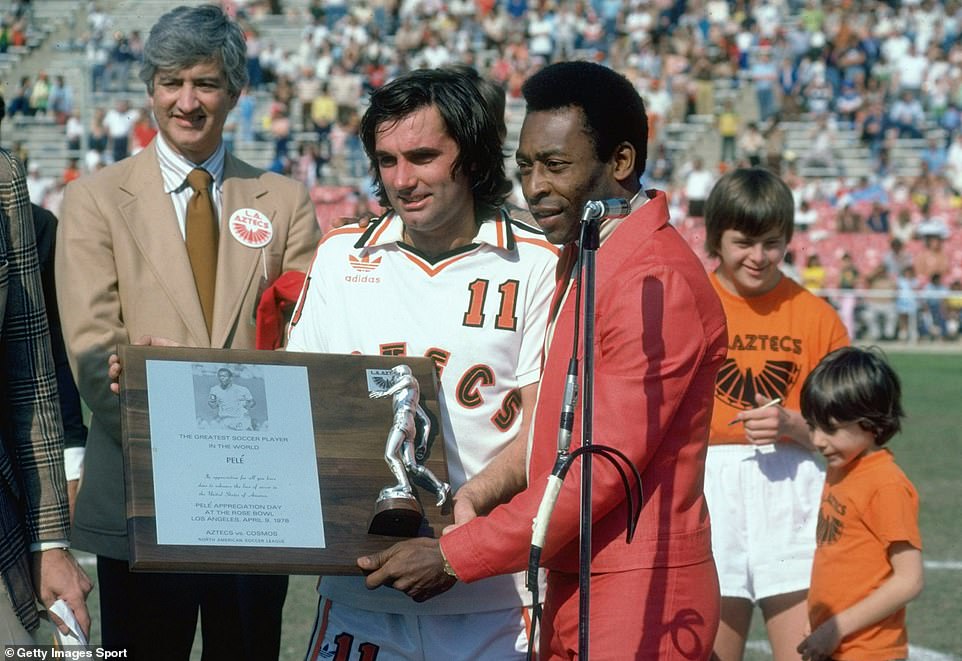 Good friends Muhammad Ali and Bobby Moore attended the final game of his career in 1977, an exhibition match between the Cosmos and Santos. As rain fell over the stadium in the second-half, one Brazilian newspaper wrote: ‘Even the sky was crying.’

It has been estimated that Pele’s annual income during his playing career was around $150,000 with his wealth significantly boosted by the $2.8million, three-year contract at New York in the twilight of his playing days.

But after retirement, he still accepted countless lucrative commercial endorsements – whether through need or choice – and was estimated to have raked in $14m by doing so. 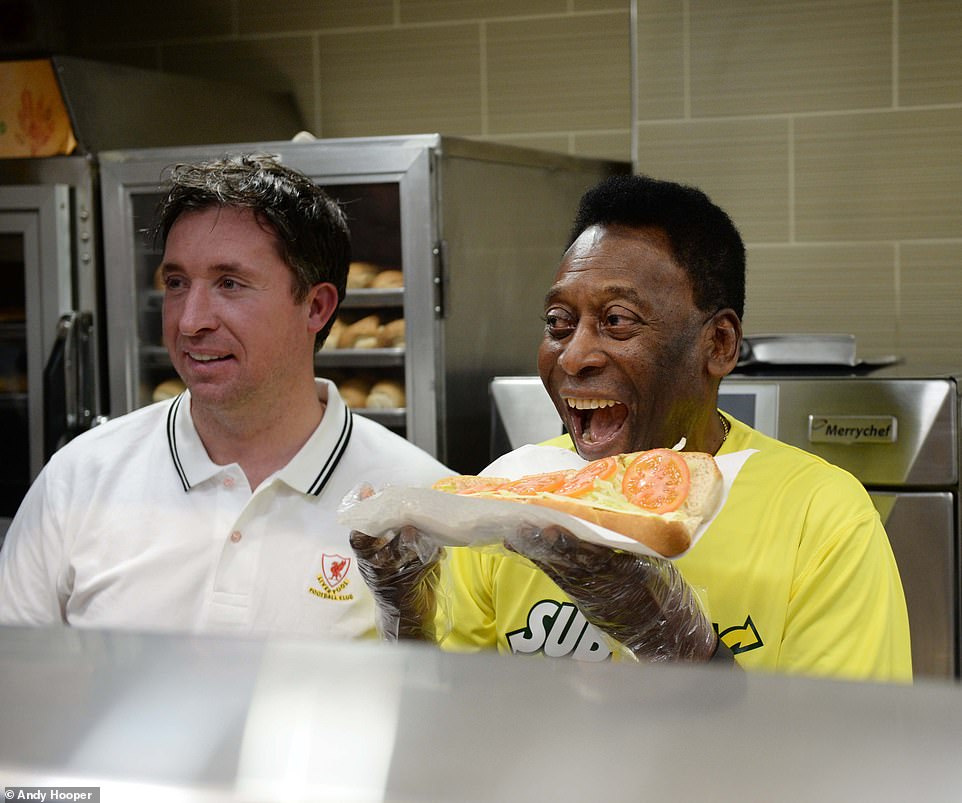 Pele at a Subway branch in Oxford Street, London alongside Robbie Fowler as he promotes the sandwich chain in 2013

His appearances in adverts to promote Viagra on behalf of Pfizer surprised many people but Pele, while insisting he never used the drug himself, said he wanted to smash the taboo around erectile dysfunction.

As early as 1981, he was promoting his own soccer video game on the Atari console, while he’s since plugged Visa in Hong Kong, MasterCard in Germany, Subway in the United States and Coca-Cola everywhere.

There have been various authorised films and documentaries about his life, while his starring role in the 1981 film Escape to Victory alongside Michael Caine and Sylvester Stallone made the tale about a football team of Allied prisoners breaking out of Nazi Germany a favourite. 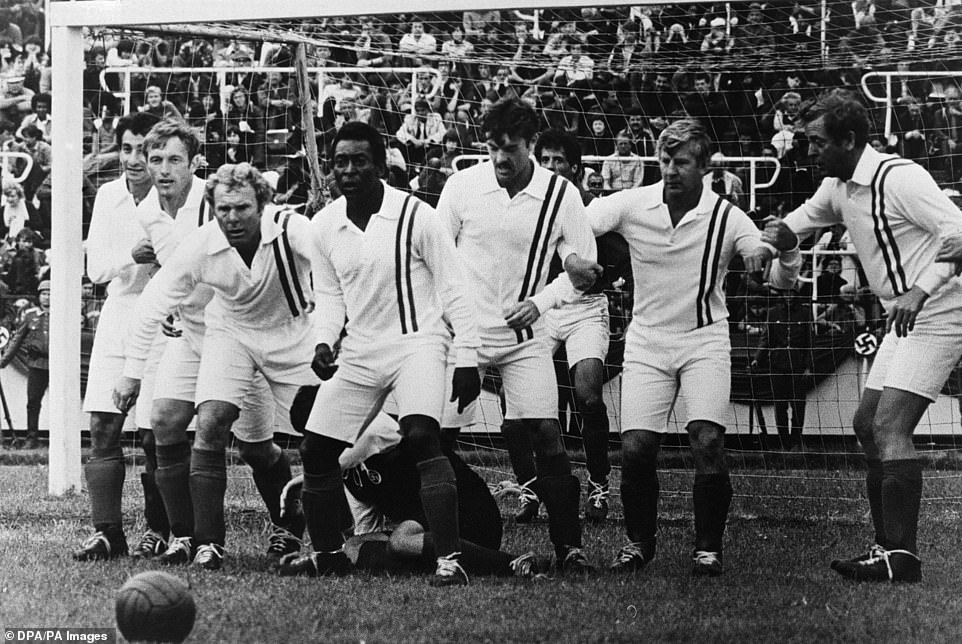 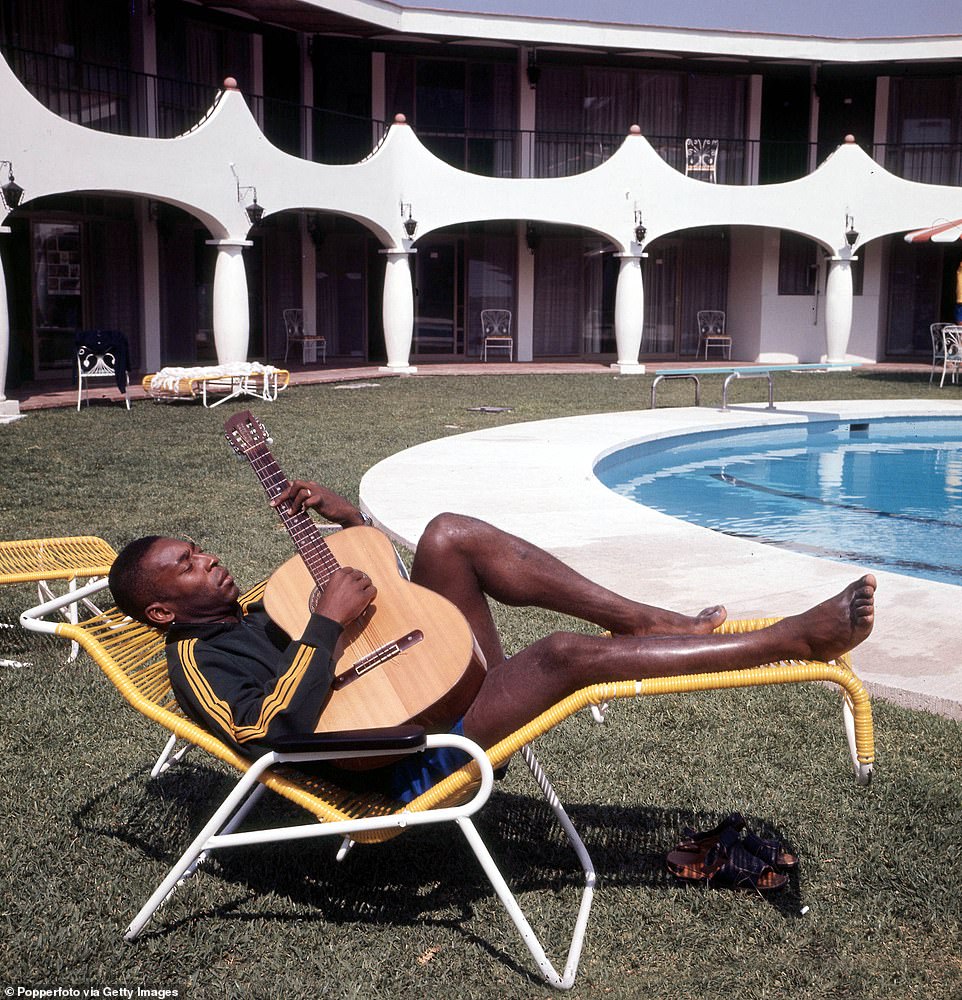 A keen guitar player, Pele strums as he relaxes by the pool of the Brazil team hotel in Mexico during the 1970 World Cup

A guitar player who would serenade and entertain his team-mates, Pele released singles and albums of his own music. A recent track was entitled ‘Listen To The Old Man’.

He dabbled in politics, serving as Brazil’s sports minister between 1995 and 1998, and had also been an ambassador for UNESCO and UNICEF as well as a UN ambassador for ecology and the environment.

It hasn’t always been smooth. There was a corruption row with Brazilian football administrator Ricardo Teixeira over TV rights for the 1994 World Cup after Pele’s own broadcasting company was snubbed. Pele was duly banned from the World Cup draw in Las Vegas by FIFA president Joao Havelange.

But awards and accolades fell upon Pele like confetti, from an honorary knighthood bestowed by the Queen at Buckingham Palace in 1997 to a place on Time magazine’s top 100 most important people of the 20th century list.

All this came against the backdrop of a chequered love life. He married first wife Rosemeri dos Reis Cholbi in 1966 and they had two daughters – Kelly and Jennifer – and a son, Edson. 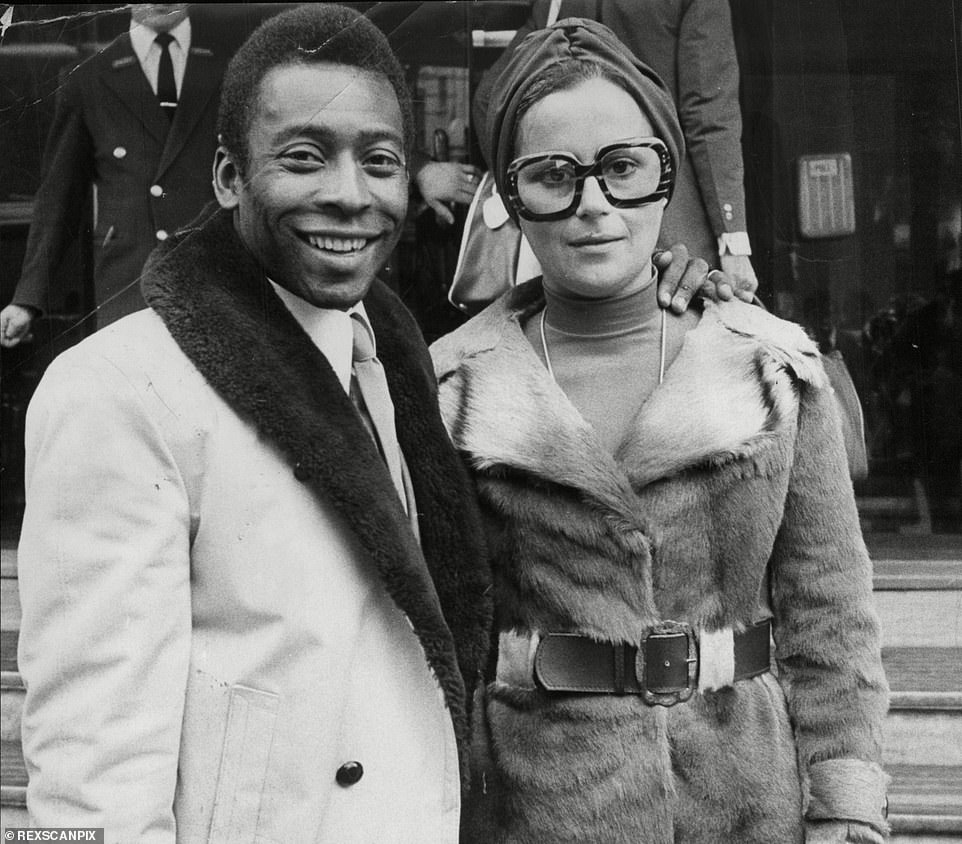 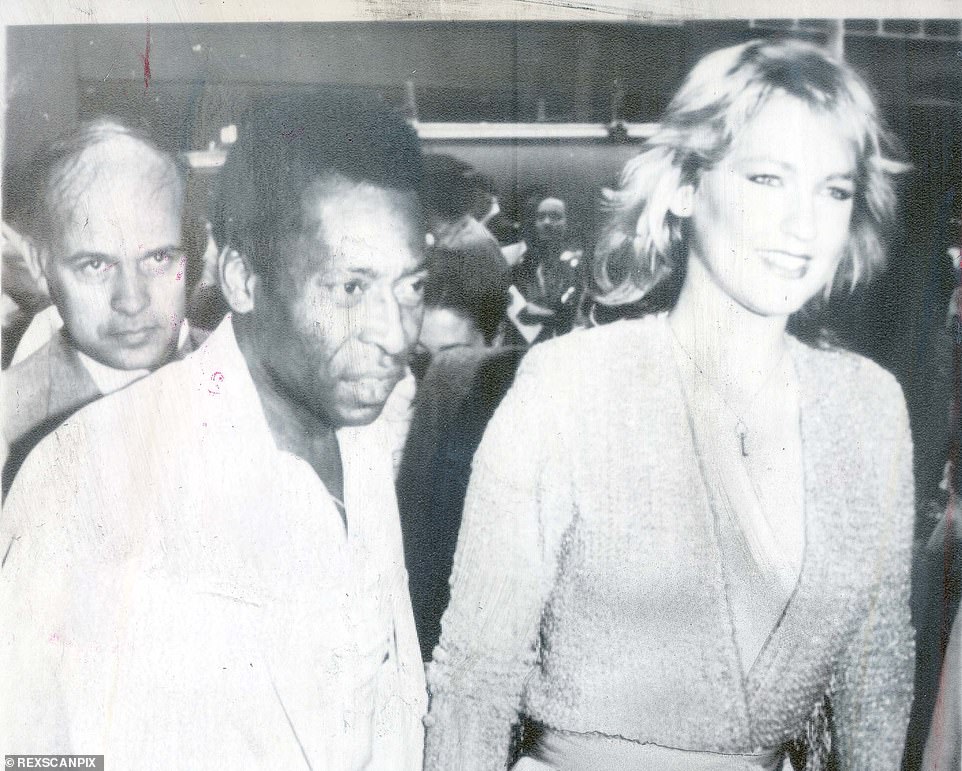 After his first marriage ended, Pele was romantically linked with the Brazilian model and TV presenter Xuxa

The son, known as Edinho, was sentenced to 33 years imprisonment on money laundering and drug trafficking charges in 2014 but this was reduced to 12 years and 10 months on appeal.

Pele visited his son several times in jail having insisted when Edinho was first arrested that ‘there is not a shred of evidence’ against him.

His first marriage ended in 1982 and Pele was romantically linked with the TV presenter Xuxa, just 17 when they started dating, for several years.

But in April 1994, he married the psychologist and gospel singer Assiria Lemos Seixas, who gave birth to twins Joshua and Celeste in 1996.

They divorced in 2008 and the 75-year-old Pele married for the third time in July 2016 to Marcia Aoki, 41, a Japanese-Brazilian importer of medical equipment. 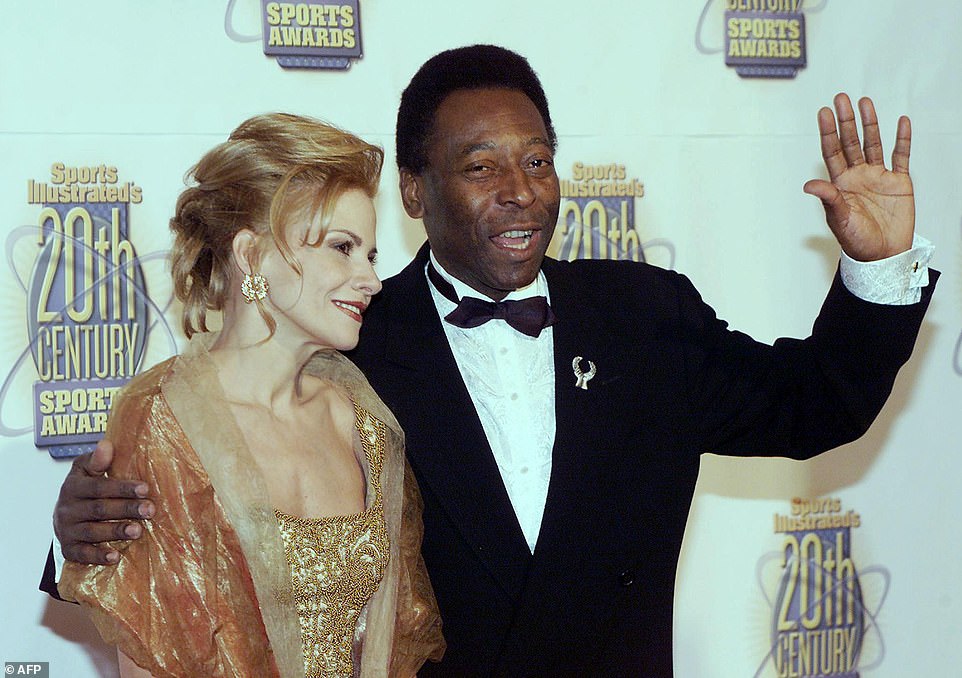 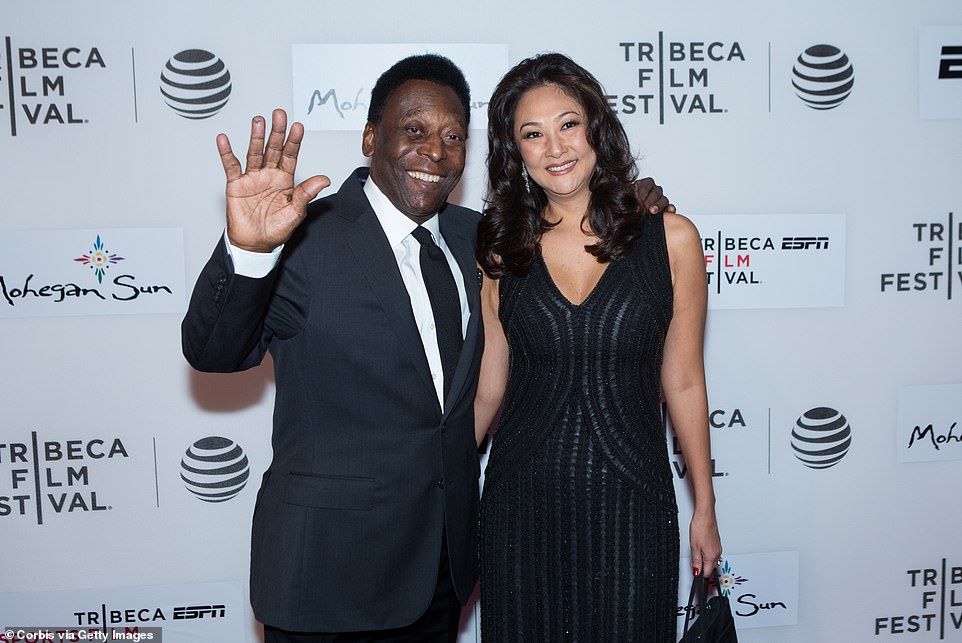 Pele married for the third time at the age of 75 to Marcia Aoki, 41, in 2016 – they are pictured at the premiere of a film of his life

Pele has at least two more children from affairs. He refused to submit to DNA tests to prove he was the father to Sandra Machado, born to an affair with housemaid Anizia Machado in 1964. Sandra won the right to use Pele’s surname Nascimento in 1996 after a five-year legal battle.

He did recognise Flavia Kurtz as his daughter after an extramarital affair with journalist Lenita Kurtz in 1968.

‘I was a normal youth and had many adventures,’ Pele once explained in an interview.

It is for Pele’s adventures on the football field he will be fondly remembered by the generation fortunate enough to see ‘The King’ in action, and subsequent ones who consider his name synonymous with ‘the beautiful game’.