A serial sex offender has admitted to committing a horrific total of 93 rapes in a near decade-long reign of terror in South Africa which saw him prey on girls as young as 12.

During a hearing in Guateng High Court on Tuesday, 32-year-old Nkosinathi Emmanuel Phakathi pleaded guilty to a total of 148 charges.

They included nearly 100 rapes and dozens of counts of kidnapping, robbery, theft and possession of an unlicensed firearm in the Ekurhuleni municipality.

He initially faced 203 charges, but the state dropped 55 of those brought against him, according to a spokesperson for South Africa’s National Prosecuting Authority.

Phakathi began targeting young women and girls aged between 12-20 in several locations in Ekurhuleni as early as June 2012.

His heinous crimes were put to a stop last year when he was shot in the leg while fleeing from police and subsequently had his leg amputated.

The serial rapist has languished in prison awaiting trial since March 2021 and is expected to face life in prison when he is sentenced next week.

During a hearing in Guateng High Court on Tuesday, 32-year-old Nkosinathi Emmanuel Phakathi pleaded guilty to a total of 148 charges, including 93 of rape 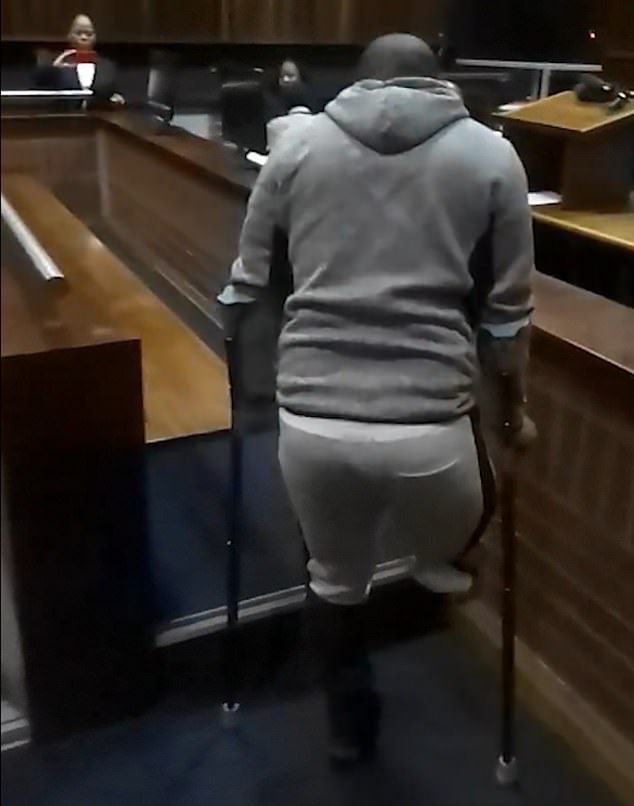 Phakathi is seen entering Guateng high court earlier this week on crutches. He had one leg amputated after he was shot while fleeing from police

Phakathi’s first rape was committed more than ten years ago, against a 12-year-old girl in Benoni City in June 2012, and he went on to rape a woman in neighbouring Daveyton just three months later.

In 2015 Phakathi raped a 15-year-old girl in Benoni, this time forcing a nine-year-old boy to witness the act. It is unclear whether this boy was the brother of the victim.

He carried out a similar attack a year later, this time sexually abusing a 16-year-old girl and forcing a boy of the same age to watch.

This pattern of reprehensible behaviour continued unchecked until February 2021, when Phakathi committed what would be his final crime.

Having charmed his way into a woman’s house, according to the indictment, Phakathi told her that he was a violent criminal and threatened to stab her unless she followed his orders.

‘He ordered her to undress and raped her repeatedly, with and without a condom,’ News24 reported. 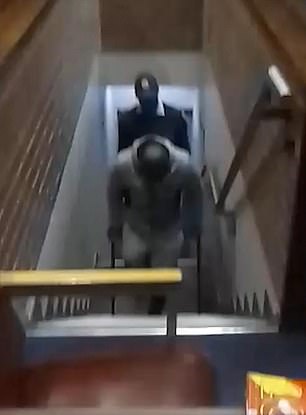 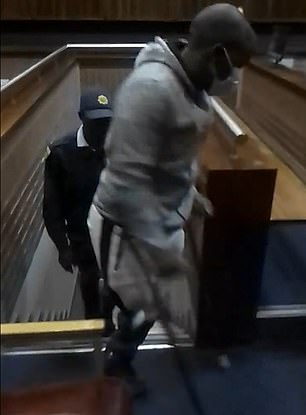 Phakathi is pictured entering Guateng High Court on crutches following the amputation. He will be sentenced on November 8 and is expected to receive life in prison

Phakathi was finally arrested in March 2021, putting an end to his terrifying spree.

He sustained a gunshot wound to his right leg while attempting to flee from police in Benoni and suffered considerable blood loss, so much so that doctors were forced to amputate the limb.

The serial sex offender was committed to the prison hospital at Modderbee Correctional Services Centre, and was refused bail upon his release from medical care.

He has remained in prison since his arrest, and is likely to receive a life sentence when he appears before Guateng High Court on November 8.

After he pleaded guilty earlier this week, judge Lesego Makolomakwe granted permission to members of the media to publish images of the offender.