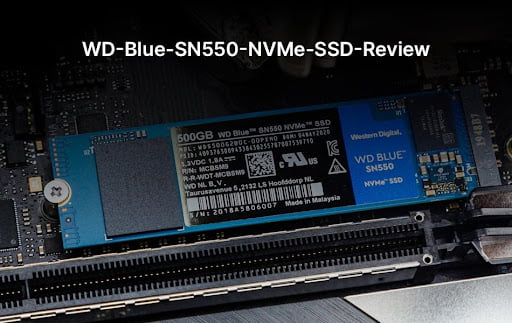 Almost every solid-state drive (SSD) on the market today is a good choice for replacing an old drive or upgrading from a regular hard disc to gain improved performance. In either scenario, Western Digital’s standard NVMe SSD is an excellent value pack. Available in four capacities, the Blue SN550 from Western Digital’s range of NVMe SSDs delivers outstanding performance with a peak speed of 2400MB/s and cheap MSRPs.

The drive was initially available in only 250GB and 500GB capacities, which was a bummer for consumers and the most probable reason behind the increased sales of the 1TB and 2TB versions of WD Black SN750. However, the company now sells the Blue SN500 in these two higher capacities as well. Aside from increased capacity, the new versions feature 96-layer 3D NAND flash, which means better storage efficiency and higher endurance. The solid-state drive (SSD) is rated to offer read speeds of up to 2.4GB/s and write speeds maxing out at 1.75GB/s. However, the lowest capacity of 250GB can only write at 950MB/s.

In addition, the write speed is determined by the SSD’s write cache. The WD Blue SN550’s write speed declines once the write cache fills, as it does with most SSDs these days. The SN550 is expected to achieve 410,000 read and 405,000 write IOPS random performance. If your motherboard has a built-in secure erase capability, you can easily wipe the SN550. Data reporting using S.M.A.R.T. and Trim is supported.

With a blue printed circuit board (PCB), the drive comes in a compact single-sided M.2 form factor, which allows it to fit into even the slimmest devices. The firmware and controller that drive the SSD were created by WD. The controller communicates with the host through a PCIe 3.0 x4 link, which improves performance over the x2 link used by the preceding SN500.

The new controller is believed to be similar to WD’s SN750’s 28nm tri-core NVMe controller. However, owing to its compactness and low power usage, the firm reduced it from 8 channels to a 4-channel design, and perhaps dropped the core count or used a smaller manufacturing process node. This means lower peak performance yet higher power efficiency.

To ensure responsive performance, most SSDs use DRAM or NVMe’s Host Memory Buffer (HMB) functionality to help speed Flash Translation Layer (FTL) activities. WD’s Blue SN550 implements the feature, but the WD Blue SN500 did not use DRAM or HMB and instead depended exclusively on a small amount of SRAM for the operation. The default allocation amount in Windows is 64MB of the host system’s DRAM.

When it comes to flash, the SN550 comes with 96-layer TLC NAND storage. On our 1TB model, there is just one NAND package, which has sixteen 512Gb dies and is situated on the PCB’s opposite end. This is WD’s approach toward improving the drive’s thermal design for longer-lasting performance by isolating the components in this fashion, which aids heat distribution and dissipation, as well as preventing heat from one component from leaking into another.

End-users get an SSD toolkit and cloning software from WD, which supports the company’s SSDs. The WD SSD Dashboard is a well-designed SSD Toolbox for Windows. It allows you to keep track of your SSD’s health and performance, as well as upgrade the firmware if the manufacturer provides one.

Acronis True Image WD Edition comes with a simple cloning application that allows you to move your data from your old drive to your new WD SSD fast and simply. It may also be used to back up system images, which is useful in case Windows breaks after a system upgrade.

You don’t need to go any further if you’re on the lookout for a fast boot drive or a fast yet inexpensive SSD to store your data. In terms of performance and affordability, WD’s new Blue is a knockout. The new Blue SN550 is an excellent illustration of WD’s vertical integration, which offers the company a strategic edge in bringing storage products to market at a low cost.

The WD Blue SN550 is one of the most reliable low-cost NVMe SSDs on the market. It comes with an in-house controller, firmware, and the company’s most recent 3D NAND. Even though it has a limited SLC write cache space, its slowest performance will still be adequate when you pound it with large writes. It is even faster than the WD Black SN750 at responding to apps and typical consumer workloads, including loading up your favorite games.

The drive is suitable for any M.2 2280 application, thanks to its single-sided form factor. Because of its low average and well-regulated maximum power consumption, it will also work well with an external NVMe adapter if you’re looking for something on the road. Not only that, it is a responsive SSD with hundreds of validation tests to back it up. The Blue SN550 is certainly worth considering, even if affordability isn’t your main concern. It comes with a 5-year guarantee and high endurance.

The WD Blue SN550 SSD has three to four times the performance of previous SATA SSDs while costing approximately the same. It’s fast enough to start your computer and open all of your apps and games quickly, and it’s capable of handling picture and video editing as well as other professional applications. There are faster options available, but unless you’re routinely producing and copying large multi-gigabyte files, the SN550 is fast enough. It isn’t quite up to the level of more premium consumer NVMe drives like the Samsung 970, but it remains an excellent entry-level option for users wanting to enhance overall system performance. Although the SN550 provided a significant performance boost over the SN500 it replaced, it nevertheless trailed behind certain competing SSDs in its market niche.

For anybody with a contemporary desktop or laptop PC, we suggest the 500 GB Western Digital WD Blue SN550 as the greatest value for money. It isn’t the fastest NVMe SSD on the market, but it’s close, and it provides an excellent price-performance-durability-capacity ratio.