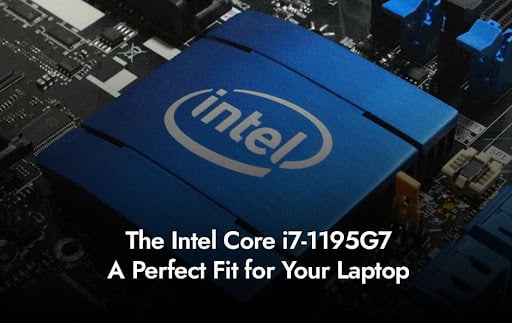 Intel has added a range of models to its “Tiger Lake-U” mobile processor line, which is targeted for today’s lightweight laptops. The addition is dubbed the “Tiger Lake-U Refresh,” and is headed by the Core i7-1195G7. (The Core i7-1185G7 was the previous line’s leader.)

A general perspective is that every updated model offers better performance than its predecessor. An Intel Core i7 outperforms an Intel Core i5, and a Core i5 outperforms a Core i3 model. But why is there such a wide range of Core i7 models, and how do the variants differ?

To understand this, we compared the Core i7-1185G7 and the Core i7-1195G7 to find out if the new one has an edge over the other. Other than speeding up some activities, it showed no substantial benefits.

A Battle of the Core i7 CPUs

The Intel Core i7-1195G7 is quad-core and modeled on the Willow Cove CPU architecture. The CPU has almost the same features as all previous Core i7-11x5Gx ‘Tiger Lake’ models with a thermal design power (TDP) of up to 28W, except that it offers higher clock speeds. With four cores and eight threads, the Core i7-1195G7 is a multithreaded processor. It has a base clock speed of 1.3GHz and can go up to 5GHz (the “turbo” speed) on one core when the program you’re using requires extra power for a brief amount of time. The older version, Core i7-1185G7, has the same count of cores and threads, but the rated clocks are significantly slower. The base speed is 1.2GHz, while in turbo mode, it reaches 4.8GHz.

Not many laptop manufacturers now provide an option of two CPUs from the same immediate family in the same chassis. When presented with the choice, it’s useful to know when you’d prefer a faster chip and when you can go without. We had the opportunity to compare the identical CPUs in not two, but three generations of the same laptop. For the third model, we included the Core i7-10710U, the leader of the 10th-Gen Comet Lake-U series. Although it has a higher number of cores and threads (i.e., 6 cores and 12 threads), it runs at a slower base clock speed and is based on an older 14-nanometer (14nm) architecture. Intel’s 10nm architecture is used in the 11th-Generation processors.

Here’s how the three CPUs stack up.

Although these Core i7 models reflect the pinnacle of Intel’s consumer laptop offerings, the Core “H-series” processors is one of the best processors are meant for large, powerful gaming laptops and mobile devices. And while the H-series chips are more power-efficient, they are too large to fit in most conventional ultraportable designs, which lack the necessary power and thermal gear to keep them cool. Intel allows manufacturers to change clock rates and other factors to guarantee that chips keep cool even while they’re under intense processing loads. Nevertheless, the performance of a CPU is determined by the laptop it is fitted in.

Test Result One: When Clock Speed is All That Matters

Three sets of criteria are used to evaluate laptop performance. The first is the level of productivity. Different real-world productivity and content-creation procedures are included in the benchmark suite. We use it to evaluate overall system performance for tasks like word processing, spreadsheet jockeying, online surfing, and videoconferencing in the workplace.

Second, we use programs, such as Photoshop, to mimic more CPU-intensive content tasks (such as photo editing and video-format conversion). Finally, there’s graphics performance, which is less significant on laptops not meant for gaming, but it still shows how powerful a CPU’s integrated graphics processor is.

While there are numerous elements that play into this test, the faster clock speed of the top-end Core i7 is likely to help it get the highest score. Web browsing and document editing, for example, often consume CPU power in brief bursts while the processor’s full clock speed is available.

Even though the Core i7-1185G7 has the same number of cores as the Core i7-1185G7, the greater speed is likely to offer an advantage in this situation. What’s more intriguing is that the additional cores and threads on the 10th-Generation Core i7 didn’t give it an insurmountable edge in this test.

This scenario is replicated in the Photoshop exam that is more difficult. Once again, the Core i7-1195G7 takes a modest but significant advantage over its younger sibling. The processor is turned off while Photoshop applies each filter, which takes a few seconds on average. It remains inactive until the next filter is available. It’s what a “bursty” process is all about.

Test Result Two: When the Core Count is Preferred

As surprising as it may sound six cores did not outperform four. Despite its highest core count, the Core i7-10710U offers no advantage here. One reason is the processor architecture, which is obsolete and less sophisticated. Another one could be minor motherboard modifications, heat pipe structures, or other upgrades.

As far as graphics performance is concerned, there’s hardly a difference between the two 11th-Gen Core i7 models. Both employ the same graphics chip and have the same amount of execution units.

It should be noted that these findings don’t cover some of the Core i7’s most sophisticated features. The tests aren’t designed to utilize the artificial intelligence algorithms built into Intel’s silicon, which become smarter with each new generation. AI capabilities vary even if we look at one generation. The Core i7-1195G7, as per Intel, offers the best AI acceleration for ultraportable laptops.

The aforementioned findings imply that a Core i7 tuned somewhat lower than maximum speed will suffice for maximizing your CPU’s performance for extended periods. Manufacturers are well aware of this fact, which is the reason you’ll find a lot of high-end ultraportable laptops with the older Core i7-1185G7, but just a handful with the new Core i7-1195G7. The Core i7-1165G7, which is the most prevalent Tiger Lake-U Core i7 chip has been seen in many of today’s laptops. However, if the prices of the two Tiger Lake processors are near each other, and the systems have otherwise similar configurations, you should upgrade to get a minor performance gain on the jobs you will use your laptop for on a daily basis.Buy best Intel processors and other computer components at affordable prices, visit Memory Clearance.