World leaders are today scrambling to clarify what happened after a missile hit NATO-member Poland and killed two people, sparking fears the alliance could be drawn into the Ukraine war and a direct confrontation with Russia.

Polish President Andrzej Duda said overnight that the missile which hit a grain processing facility in the eastern town of Przewodow late Tuesday appears to be ‘Russian-made’, though that leaves open the possibility it was fired by Ukrainian air defence which uses Soviet-era rockets. Poland’s military has been placed on high alert.

Meanwhile Joe Biden, speaking after an emergency meeting of NATO leaders at the G20 summit in Indonesia, said it appears the missile was not fired ‘from Russia’ – leaving open the possibility that it was fired by Russian aircraft outside the country’s borders. Biden stressed that investigations are ongoing.

NATO will hold an emergency meeting at 9am GMT chaired by Secretary-General Jens Stoltenberg who is expected to give a press conference a couple of hours later. Poland is likely to trigger NATO Article 4, which calls for discussions on a threat to an ally. It is a step short of Article 5, which calls for a military response to an attack.

American intelligence sources said preliminary data points to the rocket which struck Poland being a Ukrainian air-defence missile fired at an incoming Russian munition, but nobody was willing to go on-record with that information early Wednesday. The strike came amid a huge Russian bombardment on Ukraine.

British Prime Minister Rishi Sunak, German Chancellor Olaf Scholz and French President Emmanuel Macron have expressed solidarity with Poland but urged calm – a message echoed by Beijing. US Secretary of State Antony Blinken said allies would ‘remain closely coordinated in the days ahead as the investigation proceeds and we determine appropriate next steps.’

Twin explosions hit Przewodów, a rural village located five miles from the Ukrainian border in south western Poland. The aftermath of the explosions, which killed two, is pictured 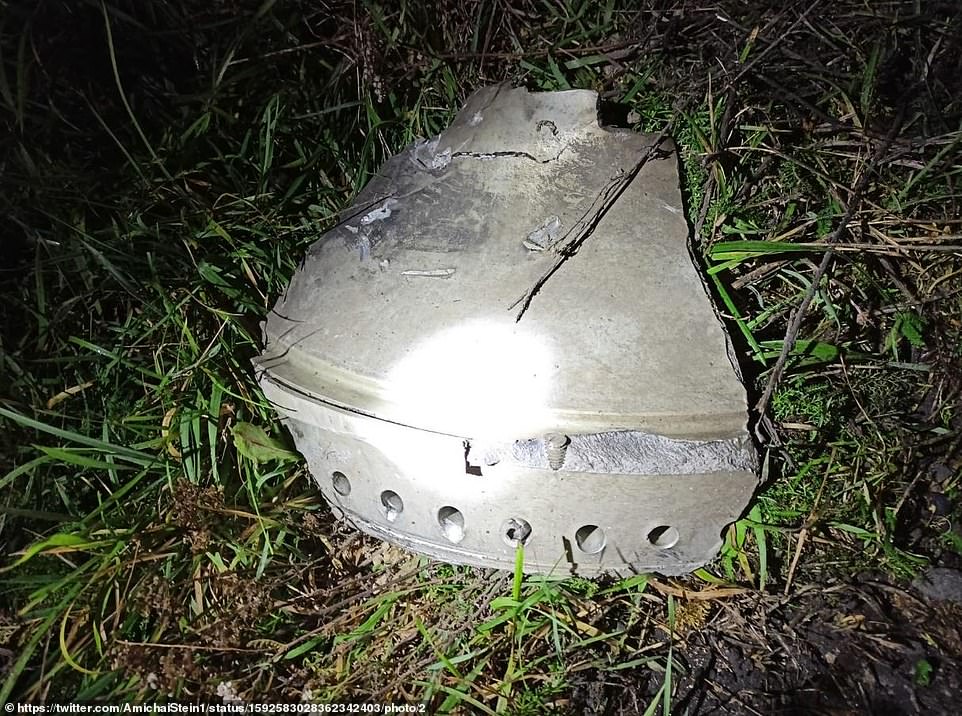 A chunk of metal is pictured lying in the dirt after Russian missiles landed on Polish soil and killed two. Some commentators have claimed the debris looks similar to components of the S-300 air defence system employed in Ukraine, but Poland’s foreign ministry confirmed the missile was Russian 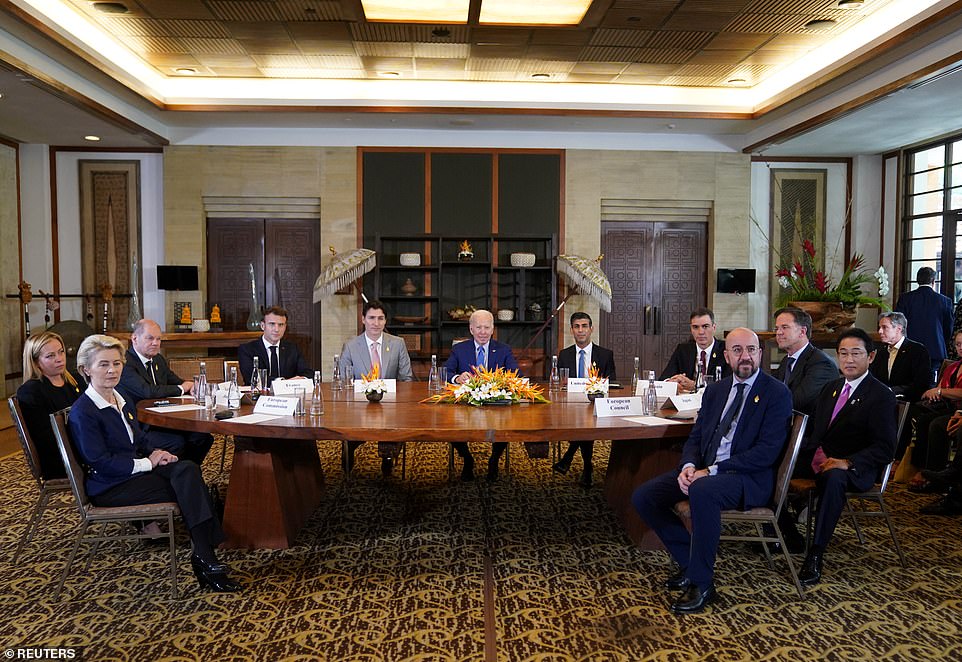 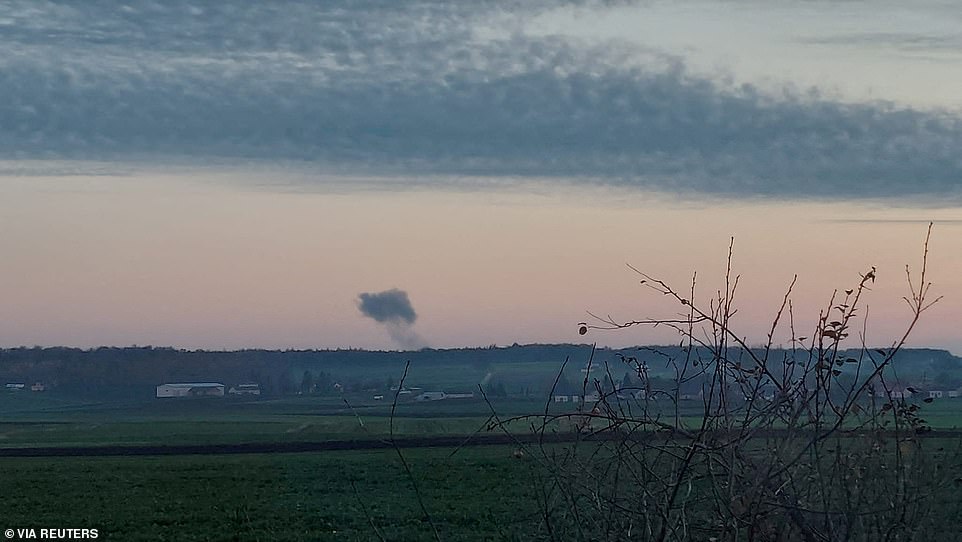 Smoke rises in the distance, amid reports of two explosions, seen from Nowosiolki, Poland, near the border with Ukraine November 15, 2022 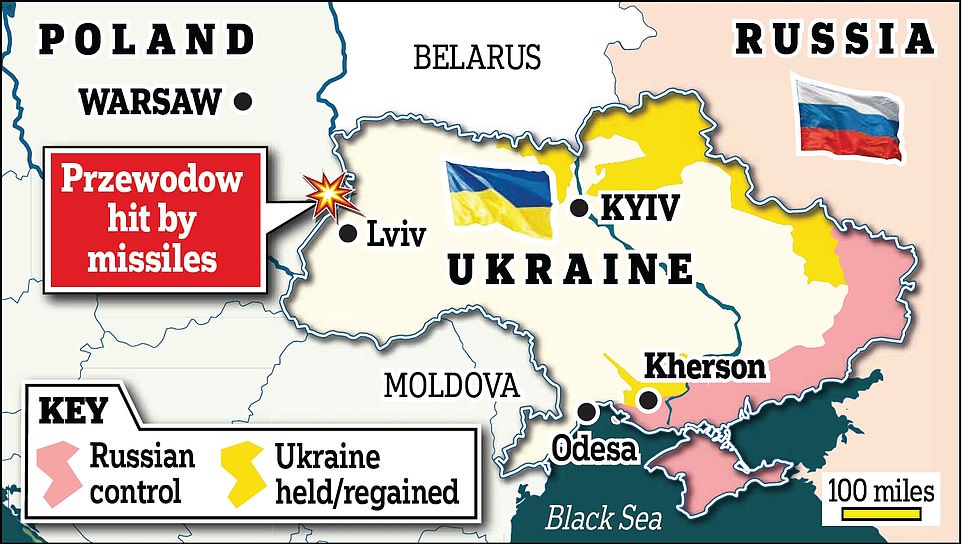 Missiles hit the village of Przewodow, five miles into Poland across the Ukrainian border, on Tuesday afternoon, killing two

What are NATO Articles 4 and 5 – and what does it mean if they are implemented?

What is Article 4 of NATO?

If any NATO member – in this case Poland – feels their territory, political independence or security is under threat, they can request a NATO meeting under Article 4.

This is a call for consultations among the allies in the face of a security threat, allowing for more time to determine what steps to take.

At this state of the process, the Allies are able to exchange views and information, and discuss issues prior to reaching an agreement and taking action.

Within hours of the blast in Poland on Tuesday night, two European diplomats said Warsaw requested a NATO meeting under Article 4 for consultations.

This has not been officially triggered yet, but Poland are likely to call for a NATO meeting this morning to discuss the threat as a result of the missile strike.

Article 4 of the NATO treaty is seen as a starting point for major NATO operations as it can lead to members triggering Article 5.

When has Article 4 been invoked?

Article 4 has been officially invoked seven times since the alliance’s creation in 1949.

Poland involved Article 4 in 2014 following increasing tensions in Ukraine, as a result of Russia’s aggressive actions.

Turkey has also invoked Article 4 on multiple occasions, such as in 2015 following terrorist attacks.

And in 2003, Turkey invoked the charter and asked for consultations with NATO members on defensive assistance in the event of a threat to its population or territory resulting from armed conflict in neighbouring Iraq.

Article 5 is the cornerstone of the founding treaty of NATO, which was created in 1949 with the U.S. military as its powerful mainstay essentially to counter the Soviet Union and its Eastern bloc satellites during the Cold War.

If such an attack does occur, each NATO member will assist the country that has been attacked any action ‘it deems necessary’.

This can include the use of armed force with the aim of restoring and maintaining the security of the North Atlantic area.

What does it mean if Article 5 is invoked?

What this could mean depends on what action the alliance decide to take, as the charter stipulates that members can take any action ‘it deems necessary’.

This could include the use of armed force – but this must be decided by the alliance.

When has Article 5 been invoked?

Article 5 has only been triggered once before, and this was on behalf of the United States, in response to the 9/11 terrorist attacks in New York and Washington.

But invoking Article 5 is not automatic because the NATO members must agree on what action they want to take.

There is no time limit on how long the consultations under Article 4 can take, and experts say the language is flexible enough to allow each member to decide how far to go in responding to armed aggression against another.

The dramatic development came on another day of bloodshed and destruction in Ukraine, with more than 100 Russian missiles landing in major population centres, killing three and cutting the power supply to millions.

‘Expressed condolences over the death of Polish citizens from Russian missile terror. We exchanged available information and are clarifying all the facts. Ukraine, Poland, all of Europe and the world must be fully protected from terrorist Russia,’ Zelensky said in a tweet.

NATO chief Jens Stoltenberg said on Twitter: ‘Spoke with President Duda about the explosion in Poland. I offered my condolences for the loss of life. NATO is monitoring the situation and Allies are closely consulting. Important that all facts are established.’

European Commission President Ursula von der Leyen meanwhile declared: ‘Alarmed by reports of an explosion in Poland, following a massive Russian missile strike on Ukrainian cities. I extend my condolences and my strongest message of support and solidarity with Poland and our Ukrainian friends,’ adding she was in close contact with Polish security officials.

British Prime Minister Rishi Sunak in a tweet said Britain will support allies as they establish what happened.

‘We are also coordinating with our international partners, including NATO,’ Sunak said.

Estonia’s Ministry for Foreign Affairs added: ‘Estonia is ready to defend every inch of Nato territory.’

And UK defence commentator Rear Admiral Chris Parry said it was ‘time to station advanced anti-air systems on Nato’s borders and intercept anything that looks like it would cross those borders’.

Russia on Tuesday unleashed one of its largest missile barrages to date at Ukraine, leaving the country’s energy network ‘critical’ with rolling blackouts.

More than 100 rockets were fired at cities across the country, hitting civilian buildings and power stations, the Ukrainian air force said.

The bombardment left half of Kyiv, where at least one civilian died, and the whole city of Zhytomyr without power.

Strikes were also reported in the western city of Lviv – the closest large urban settlement to the Polish border – and caused partial blackouts.

The bombardment came as German newspaper Der Spiegel reported that documents leaked from the German military said one of the country’s top generals, Eberhard Zorn, ordered the country’s army to put itself on a war footing in the face of ‘existential’ threats.

The 68-page policy paper was produced in September, according to Der Spiegel. In it, Zorn called for the complete overhaul of the German military and told commanders to prepare themselves for war.

‘Attacks on Germany can potentially occur without warning and with great, possibly even existential, damage,’ he wrote.

Attacks on Ukraine came just hours after Ukrainian president Volodymyr Zelensky – speaking via videolink from Kyiv – told world leaders at the G20 Bali summit that he is ready to end the war provided Russia withdraws its troops from areas it currently occupies.

Russian foreign minister Sergei Lavrov – speaking later at the summit in Indonesia – accused the West of waging ‘hybrid war’ in Ukraine and Kyiv of ‘prolonging’ the conflict, without mentioning Russia’s own involvement in the fighting.

‘There is an attack on the capital. According to preliminary information, two residential buildings were hit in the Pechersk district,’ Kyiv Mayor Vitali Klitschko said.

‘Several missiles were shot down over Kyiv by air defence systems. Medics and rescuers are at the scene of the strikes.’

Moments later, he added: ‘Another hit in the Pechersk district. Multi-storey building.’

Andriy Yermak, head of Zelensky’s staff, said the attack was a response to the president addressing the G20 – ramping up pressure on Russia to stop its attacks.

‘Does anyone seriously think that the Kremlin really wants peace? It wants obedience. But at the end of the day, terrorists always lose,’ Yermak said. 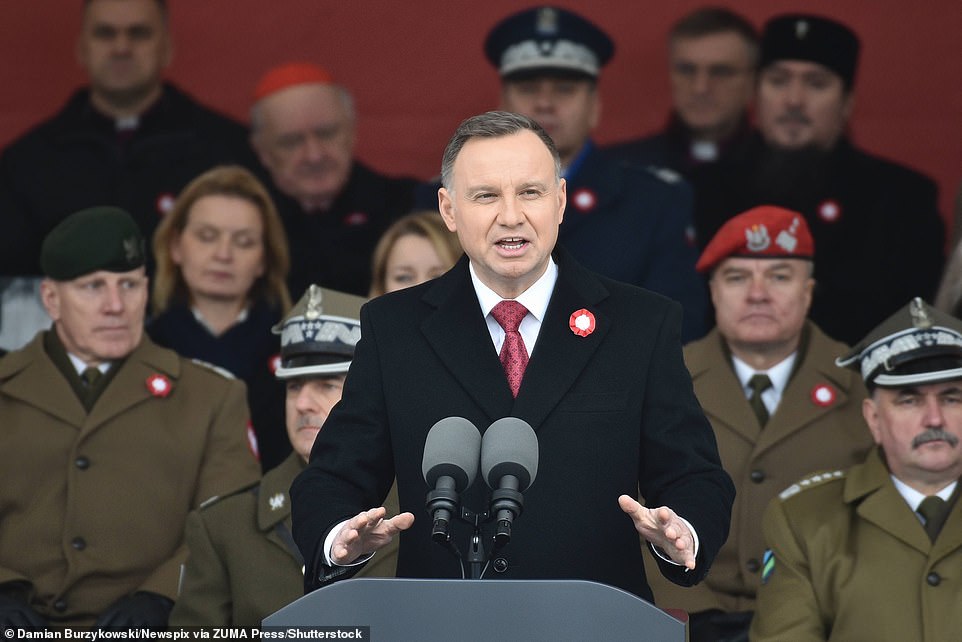 Polish president Andrzej Duda is pictured. Polish officials were called into an emergency meeting following the news that a pair of Russian missiles had hit a village near the border with Ukraine, killing two 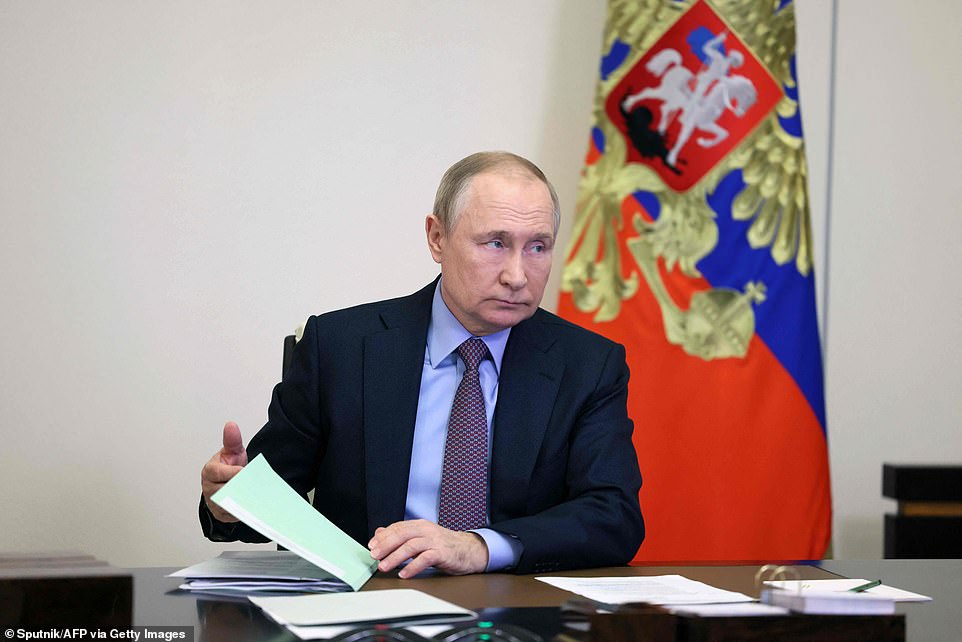 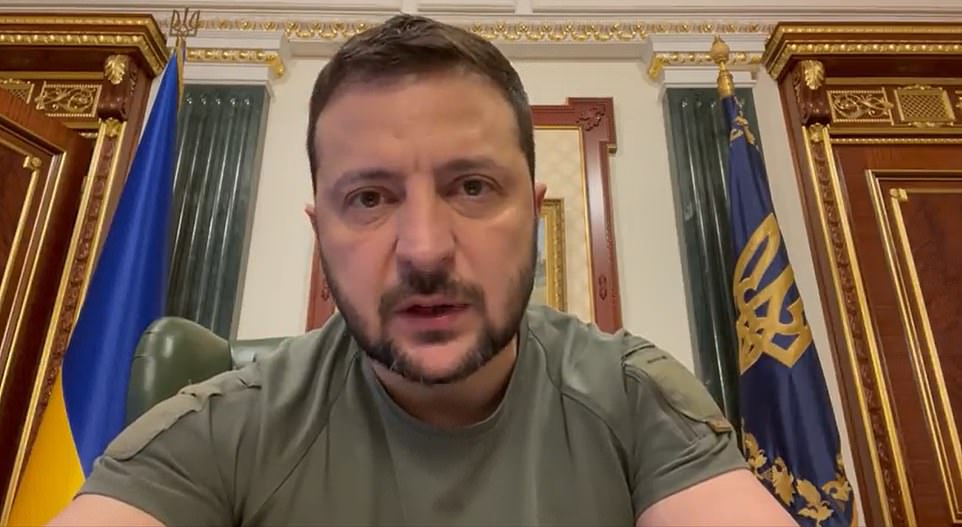 Russian forces have in recent weeks been targeting energy infrastructure across Ukraine and has launched barrages of missiles and swarms of drones.

Around a third of Ukraine’s power-generating capacity has been taken out, causing rolling blackouts across the country just as winter hits.

Kyiv was last targeted by Russian forces nearly one month ago on October 17.

A draft communique obtained by AFP showed the world’s 20 leading economies coming together to condemn the war’s effects, but still divided on apportioning blame.

The summit has shown that even Russia’s allies have limited patience with a conflict that has inflated food and energy prices worldwide and raised the spectre of nuclear war.

Risking diplomatic isolation, Russia was forced to agree that the war in Ukraine – which Moscow refuses to call a war – has ‘adversely impacted the global economy’.

It also agreed that ‘the use or threat of use of nuclear weapons’ is ‘inadmissible’, after months of its president Vladimir Putin making such threats.

The embattled Russian leader has skipped the summit, staying at home to reckon with a string of embarrassing battlefield defeats and a grinding campaign that threatens the future of his regime.

He said they could ‘save thousands of lives’ by pressing for a Russian withdrawal.

The United States and its allies used the summit to broaden the coalition against Russia’s invasion and scotch Moscow’s claims of a conflict of East versus West.

Western officials offered a sobering assessment of the conflict yesterday, indicating their belief the conflict could ‘grind on’ through 2023. They consider the war to have reached a stalemate. 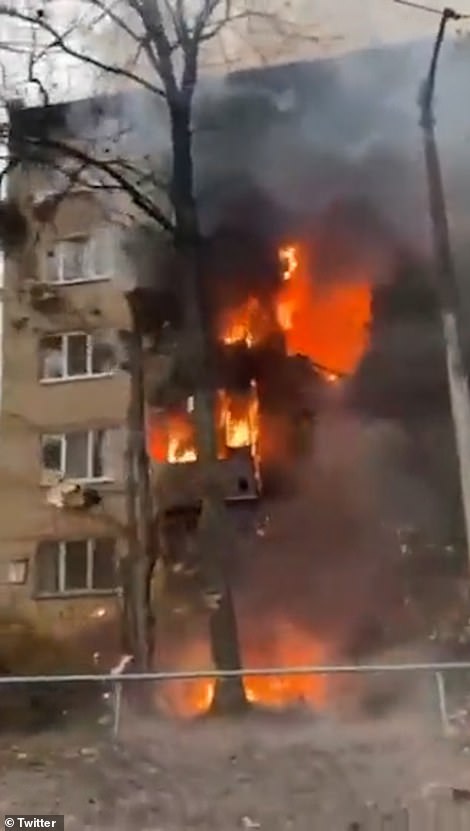 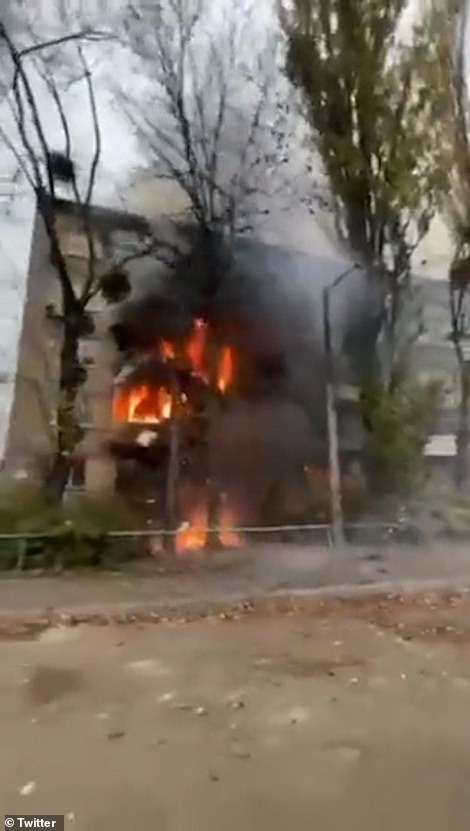 At least three Russian missiles hit the Ukrainian capital of Kyiv on Tuesday, with mayor Vitali Klitschko saying they all struck residential buildings

5 Long-Term Effects of HHC You Must Know

Artemis launch: NASA shoots for the moon with $4 billion mission